Great British Bake Off 2019: Meet the youngest EVER line-up including a geography teacher, a fashion designer, a HGV driver and a vet… as show increases its number of contestants to 13 (or a baker’s dozen)

Channel 4 have unveiled the 13 home-bakers competing in the tenth season of The Great British Bake Off, due to hit screens next week.

And, to be expected, the competitors are a diverse group of amateur bakers including a geography teacher, a fashion designer, a HGV driver and vet.

The series – which usually sees only 12 hopefuls hit the tent to showcase their culinary skills – will be hosted by fan favourites Noel Fielding and Sandi Toksvig and judged by Paul Hollywood and Prue Leith. 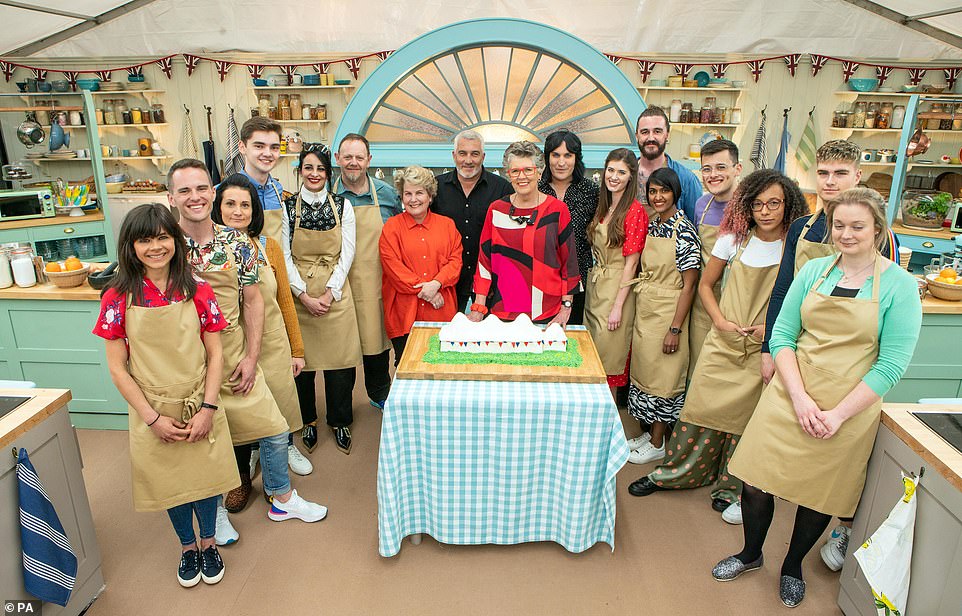 Mixing it up: Channel 4 have unveiled the 13 home-bakers competing in the tenth season of The Great British Bake Off, due to hit screens next week

Sandi and Noel joined the baking show when it moved from BBC to Channel 4 in 2017, where they replaced Sue Perkins and Mel Giedroyc, who had hosted the show for six years.

Also deciding not to make the move to the channel was Mary Berry who was substituted for Prue but Paul Hollywood remained on the show.

This year’s eagerly awaited series is championing younger cake makers as the line-up is made up of seven people in their 20’s, while the oldest contestant is 56, and the average age inside the tent is 31.

One of the thirteen hopefuls will be taking home the desirable title of Bake Off champion, won last year by Rahul Mandal, who, in a show first, was given fifteen extra minutes to complete his final bake in the 2018 final after a glass storage jar shattered on his worktop after being hit by a beam of sunlight.

So who are this years aspiring cooks, who hopefully can handle the heat in the kitchen and keep their cool as they mix, bake and whip up a host of star bakes and show stoppers.

Geography teacher Alice, 28, took up baking at the age of 15 when a back operation for scoliosis left her unable to do sport. 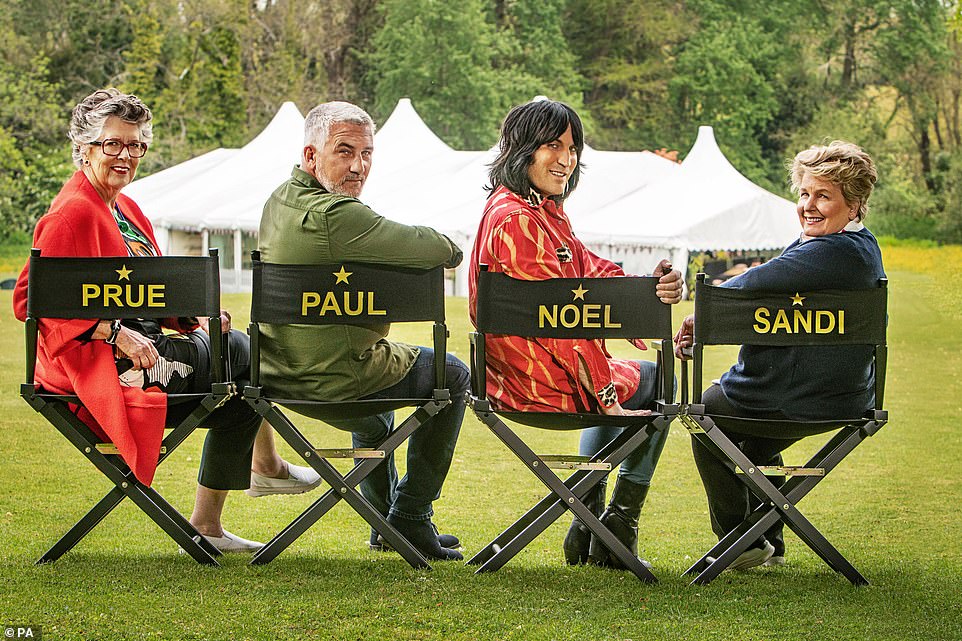 They’re back: The series – which usually sees only 12 hopefuls hit the tent to showcase their culinary skills – will be hosted by fan favourites Noel Fielding and Sandi Toksvig and judged by Paul Hollywood and Prue Leith

After moving to New Zealand in her 20s she attended art school and then returned to the UK to live in London.

Alice often merges her love for baking with her passion for teaching and uses her cakes in lessons to demonstrate natural activities such as coastal erosion and volcanic activity.

Revealing her dream to appear on Bake Off began since 2010, she said: ‘I have wanted to be in Bake Off ever since the show has started, but I wasn’t really good enough when I was 18. To be on such a big show doing something that you are passionate about is a huge thing.

‘I also felt that to be accepted into the tent gave me the confidence to feel that I could bake. It was a dream come true!’

Likewise to Alice, fashion designer Amelia, 24, has also wanted to star on the show since it first aired.

GREAT BRITISH BAKE OFF 2019: WHO ARE THE CONTESTANTS? 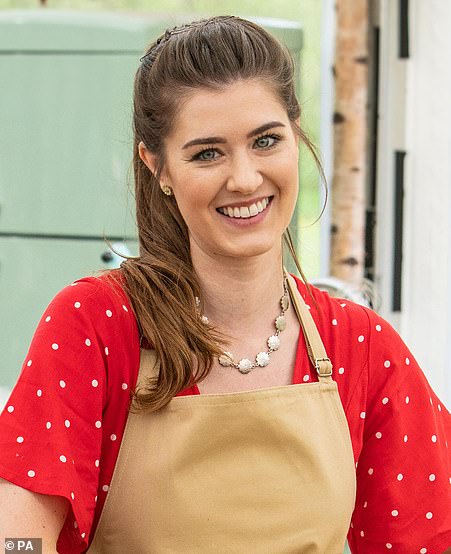 Piece of cake: Geography teacher Alice uses her baking creations to to demonstrate natural events to her student 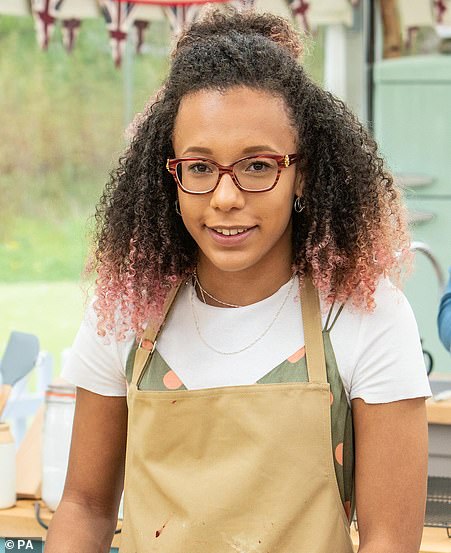 Sew in love with baking: Amelia is a sportswear designer who worked on her baking skills when she was at university

Why Bake Off? Alice started baking at the age of 15 when a back operation for scoliosis left her unable to do sport. She now uses her cakes in her lessons, demonstrating natural events such as coastal erosion and volcanic activity with her edible creations

Why Bake Off? Born to a Caribbean father and a half-British/half-Polish mother, Amelia honed her baking skills while at university, baking for friends and college fundraising events. She currently lives in London and works as a sportswear designer 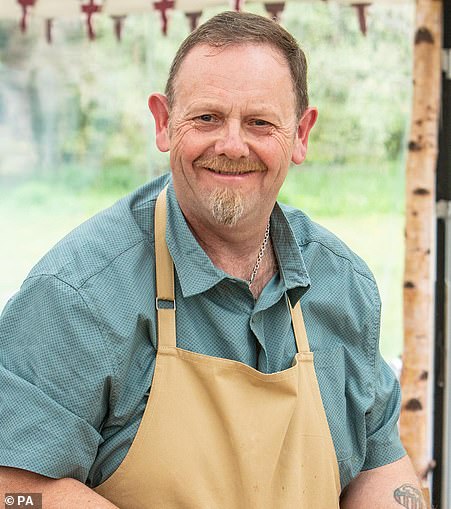 Why Bake Off? Working early shifts as a driver means he is able to spend the rest of his day cooking for his wife and two daughters as well as baking treats for his motorcycle meetings with friends 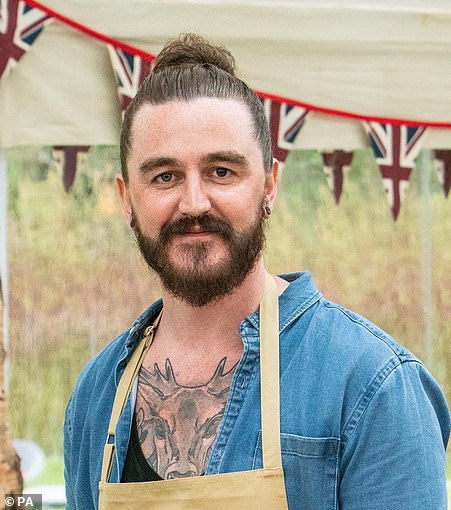 The way to a person’s heart is through their stomach: Dan became serious about baking a while trying to impress his no wife, Laura

Why Bake Off? Dan became serious about baking at the age of 21 while trying to impress his girlfriend Laura, who is now his wife, with a themed birthday cake. Dan, who lives with Laura and their three dogs, even made their wedding cake 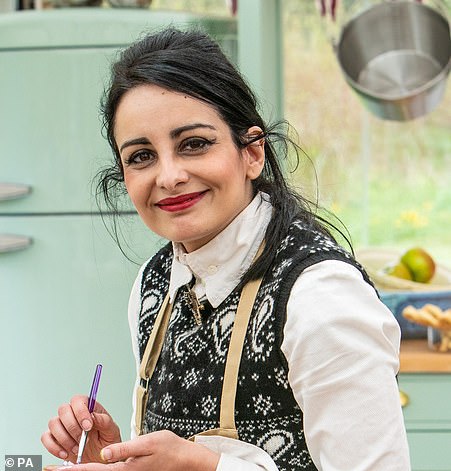 Mediterranean inspiration: Helena’s Spanish roots will play a big role in her bakes

Why Bake Off? Helena’s introduction to baking came at a young age as she watched her Spanish grandmother in the kitchen, but it was moving to Las Vegas and living with a Mormon family for a school exchange trip that prompted her to start baking herself 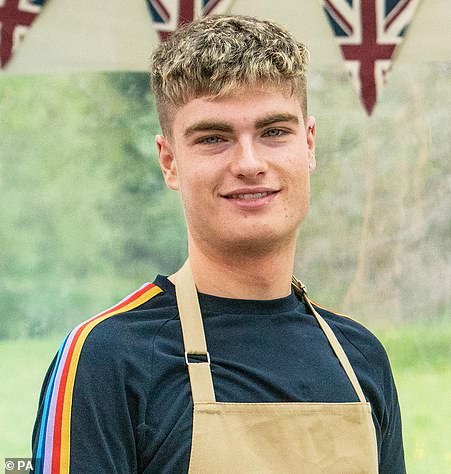 On a roll: Jamie was inspired to make a plaited loaf following watching Bake Off

Why Bake-off?  Jamie, who is an identical twin, was taught the basics by his grandmother and his parents, but it was after watching an episode of Bake Off and being inspired to make a plaited loaf that really saw his baking passion take hold 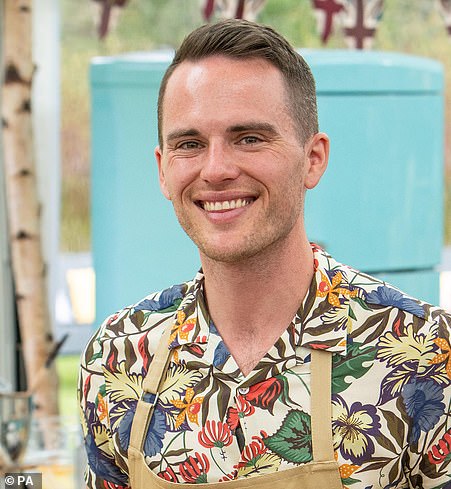 Home grown: David’s mum refused to buy bread from the shop when he was younger leading to him being inspired to bake

Why Bake Off? Having grown up in rural Yorkshire with a mother who would always bake and refuse to buy a loaf from the shops, Dan was inspired to bake as a child. He became further interested in the art of baking after travelling to where he learnt to build an oven out of an oil drum 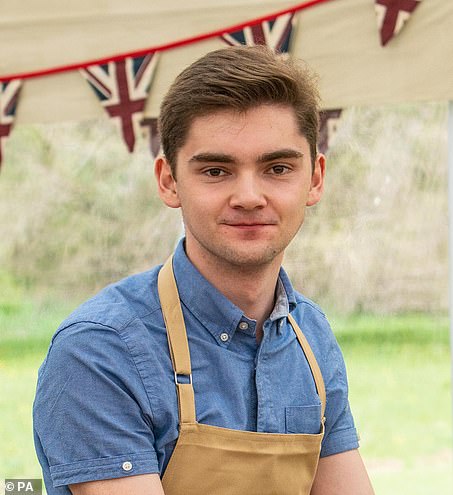 Hollywood fan: Henry became interested in baking after seeing Paul Hollywood on the way to school

Why Bake Off? Henry became interested in all things culinary and baking at the age of 12, as he was intrigued by the Bake Off tent  at the end of his road, he shared: ‘I used to see Paul Hollywood when I walked past the tent to go to school in the mornings’ 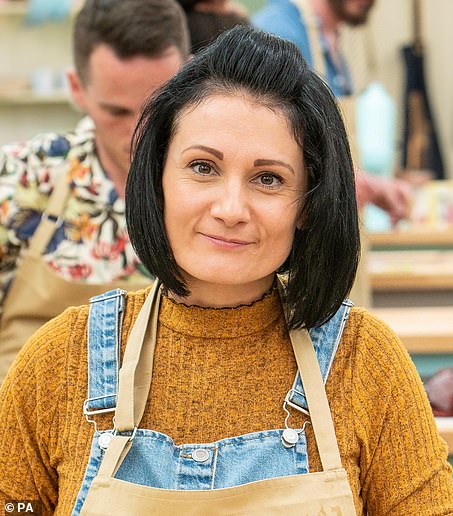 Home is where the heart is: Michelle, who grew up on a farm, has been a lover of baking since she was a child

Why Bake Off? Michelle, who grew up on a farm, has been a lover of baking since she was a child, watching her mother whip up traditional bakes. She now bakes almost every other day, whether it is a loaf of bread or a dessert for her husband and teenage son 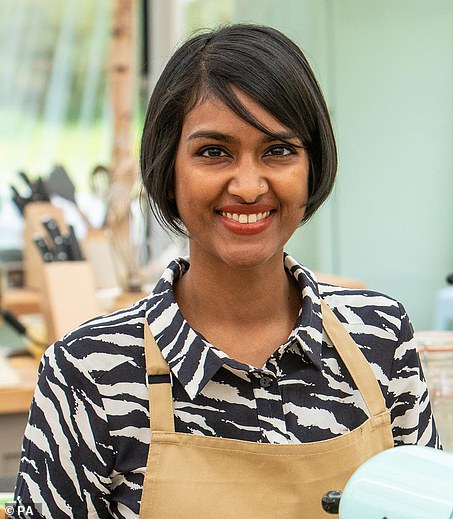 Zen baker: Priya began baking as a way to de-stress and relax

Why Bake Off? Priya started to take baking seriously 10 years ago as a means to relax. A wedding present of a stand mixer seven years ago only boosted her passion even more, and she is known to toil for hours into the night baking bread 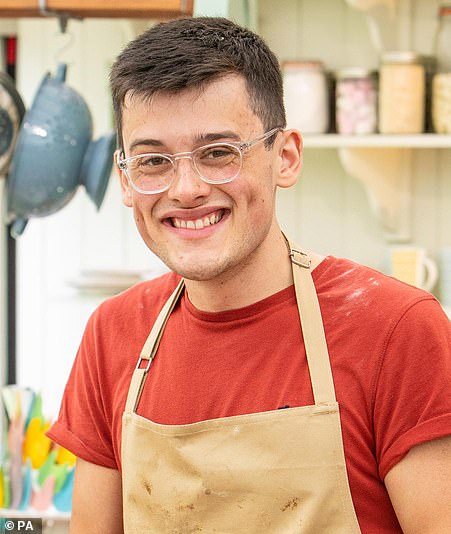 Mum’s the word: Michael was shown the baking ropes by his mum

Why Bake Off? Michael was taught to bake by his mother using old, handwritten recipes passed down from her grandparents. Born in Newcastle, he was raised in Scone in Scotland from the age of seven and later studied in Edinburgh, and he considers himself Scottish 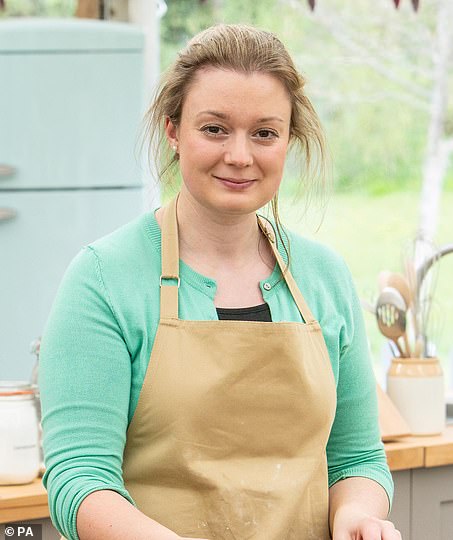 Night time baker: Vet Rosie likes to bake through the night after work

Why Bake Off? Rosie’s passion for baking started when she was given a baking book at the age of five, and it has continued into her adult life. When she is not treating sick animals, she can be found baking through the night to unwind 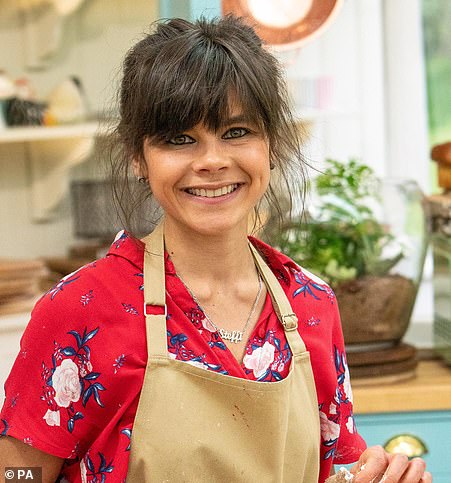 Taking the biscuit: Self -taught Steph took up baking after her grandfather inspired her

Why Bake Off? Steph took up baking when her grandfather inspired her thanks to his love of homemade bread. Although it has long been a hobby of hers, she really became serious around three years ago and is largely self-taught

The Halifax native, has been baking since the age of five, when she watched her mother and grandmother make beautiful cake decorations.

Although now living in London, the sports-wear designer still draws on her northern roots in her baking and firmly believes that freshly farmed produce is essential for a good bake.

HGV driver Phil, 56, who lives in Rainham, East London, with his wife and two daughters shared that his long-terms friend will be shocked and surprised he is on the series.

Despite baking four to five times a week, he told: ‘They had been staying with us recently and said “you make such wonderful cakes”, but have never mentioned to me that I should go on Bake Off, so I think they haven’t a clue that I would be in it.’ 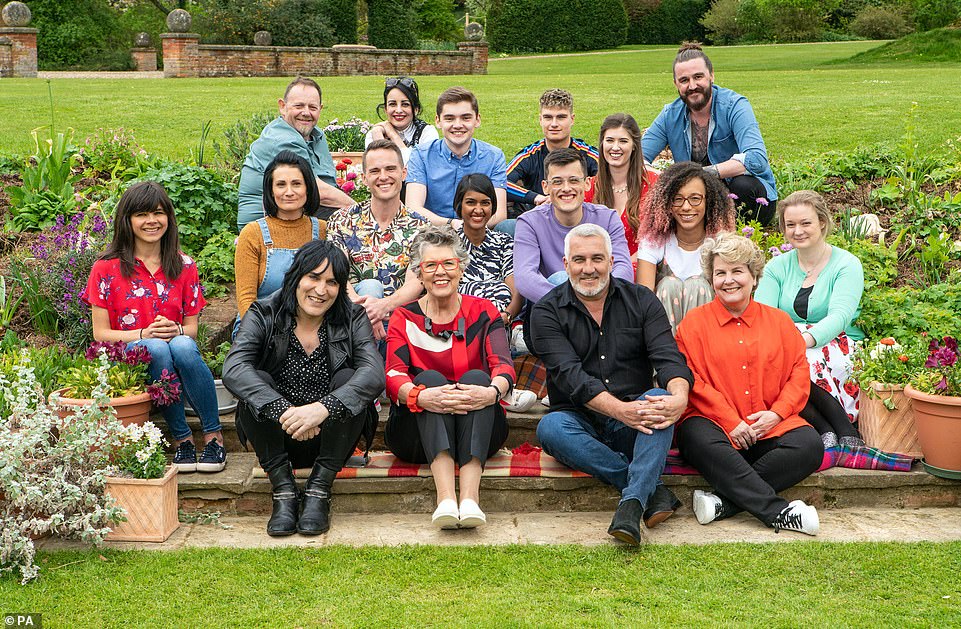 Cut from the same cookie dough: This year’s eagerly awaited series is championing younger cake makers as the line-up is made up of seven people in their 20’s, while the oldest contestant is 56, and the average age inside the tent is 31

Somerset-based veterinary surgeon Rosie, 28, uses baking to wind down from her stressful job and often bakes through the night to keep the nurses at her surgery well-fed.

He favourite bake is a box of mixed pastries and she is inspired by her rural surroundings, from the orchards next to her house to the eggs laid by her ducks and chickens.

Joining them will be Steph, 28, a shop assistant from Chester, who enjoys creating healthy bakes with added fruits and vegetables, Priya, a 34-year-old marketing consultant from Leicester who is a self-professed perfectionist and lover of baking late into the night, and print shop administrator Michelle, 35, from Tenby in Wales, who bakes almost every other day and enjoys experimenting with flavours. 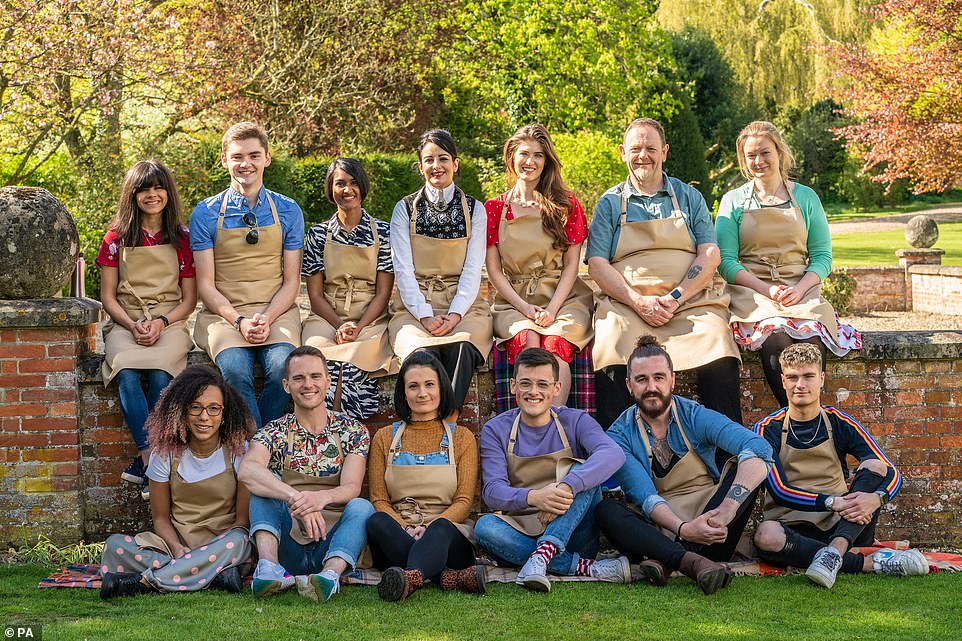 Hopefuls: This year’s aspiring bakers will be looking to follow in the footsteps of Sophie, Nadiya Hussain, Candice Brown and Nancy Birtwhistle

Also in the tent will be theatre manager and fitness instructor Michael, 26, from Stratford-upon-Avon, who is inspired by the flavours of his Indian heritage, and 20-year-old part-time waiter and sports science student Jamie from Surrey, who likes the challenge of a technical bake such as a croquembouche.

Helena, a 40-year-old online project manager from Leeds, focuses on using American flavours as well as those from her Spanish heritage in her baking, while international health adviser David, 36, who lives in London but comes from Yorkshire, is fond of robust flavours and solid bakes, rather than fancy, colourful decorations.

The line-up is completed by support worker Dan, 32, from Rotherham, who is largely self-taught in the kitchen and made his own wedding cake, and 20-year-old English literature Durham University student Henry, who tests out his culinary skills and carefully combined flavours on his house mates.

The new series of The Great British Bake Off will begin on Channel 4 on August 27 at 8pm. 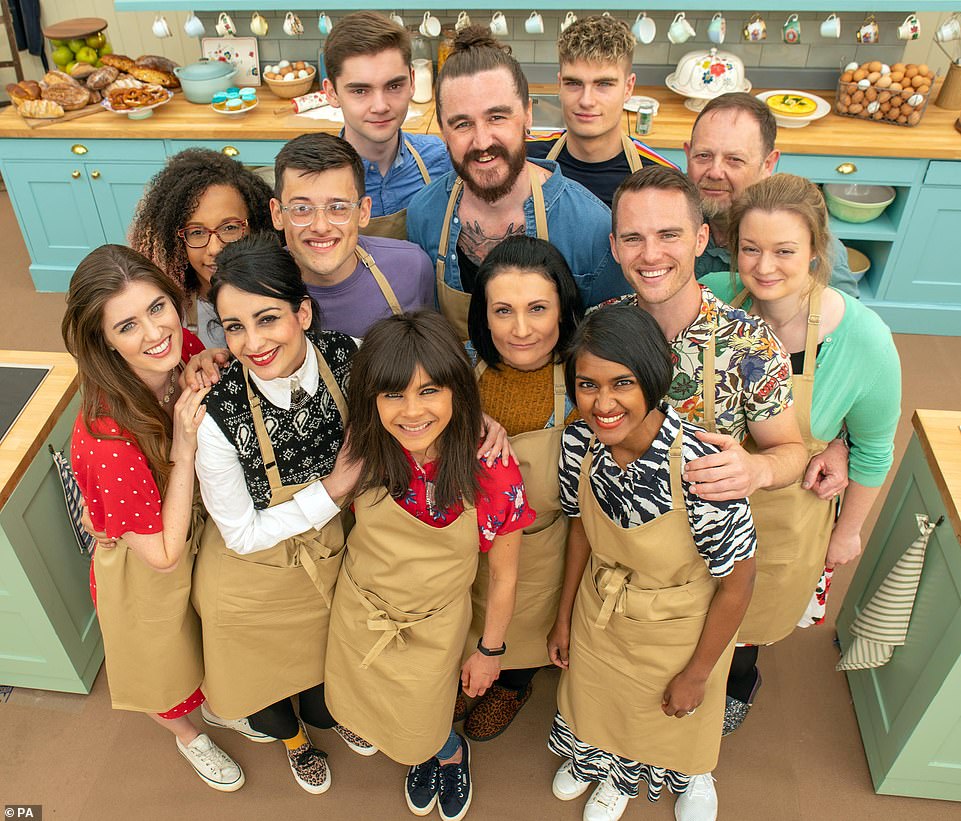 Coming soon: The Great British Bake Off’s will return to Channel 4 on August 27 at 8pm