‘Could you be any more tone deaf?!’ This Morning chef Gino D’Acampo is slammed for cooking pasta with a £150 truffle as worried Brits brace themselves for cost of living crisis

This Morning viewers might struggle to heat their homes this Christmas, but at least they can take heart in knowing how to cook Gino D’Acampo’s chipolata and mascarpone pasta – even if the ingredients are out of their price range.

Those who tuned in to ITV on Tuesday were left sputtering their coffee after the Italian chef – a regular fixture on the show – prepared a traditional pasta dish with a few costly extras.

As the cost of living crisis casts a tall shadow across Britain, forcing millions to economize by purchasing cheaper food, D’Acampo, 46, livened up his latest meal with a large white truffle, worth as much as £150. 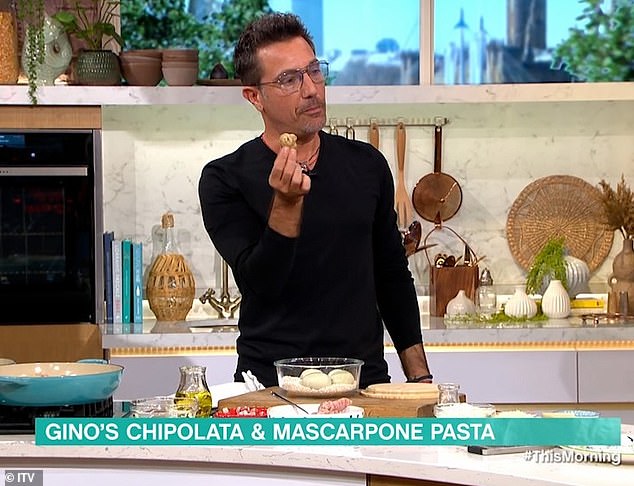 Not happy: This Morning viewers have slammed show chef Gino D’Acampo for using an expensive truffle to garnish his latest dish as Brits across the country tighten their belts

The chef had requested the expensive truffle at the behest of his son ahead of the cooking segment, during which he used shavings to embellish his pasta dish, and admitted he was taking it home after the show.

D’Acampo also joked that its exorbitant cost would come out of well-heeled Holly Willoughby and Phillip Schofield’s salaries.

But he infuriated viewers when asked why he had chosen such a costly ingredient, telling them: ‘Because I can.’ 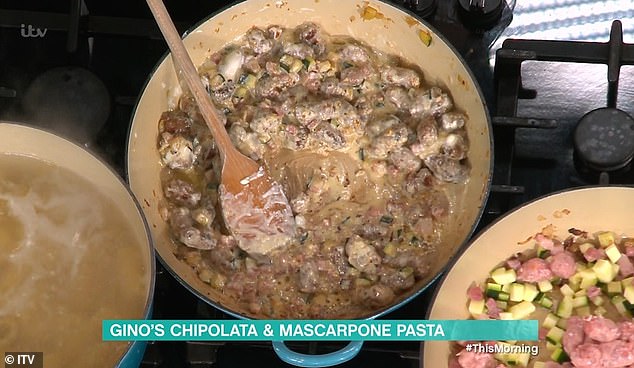 Pricey: As the cost of living crisis casts a tall shadow across Britain, D’Acampo livened up his chipolata and mascarpone pasta with a large white truffle, worth as much as £150

Outrage: Viewers aired their grievances on Twitter after the chef admitted he used the truffle ‘because I can’

Taking to Twitter, one unimpressed fan raged: ‘Gino De Campo is all Ego. … “I use white Truffle…. Because I can” well good for you Gino. You utter f***ing moron… multi million pound TV contract to cook and chat s**t…. So out of touch.’

A second added: ‘Chef Gino calls ahead to make the show buy him a £100 truffle, which he then takes home. Really makes sense when people are struggling to pay for their shopping. Get real.’

Another carped: “#ThisMorning doing a cooking section with white truffles… could you be any more tone deaf during the current cost of living crisis ? Pathetic.’ 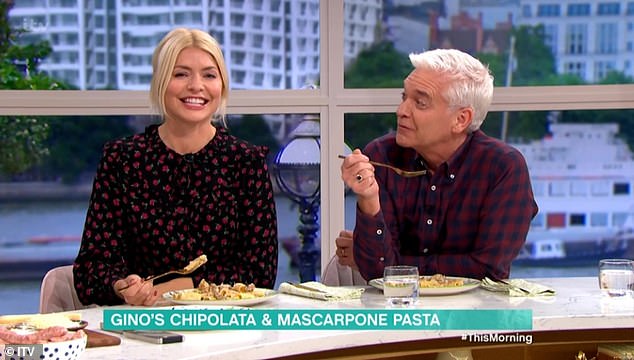 Front of the queue: Holly Willoughby and Phillip Schofield were first in line as they tasted D’Acampo’s latest dish on Tuesday 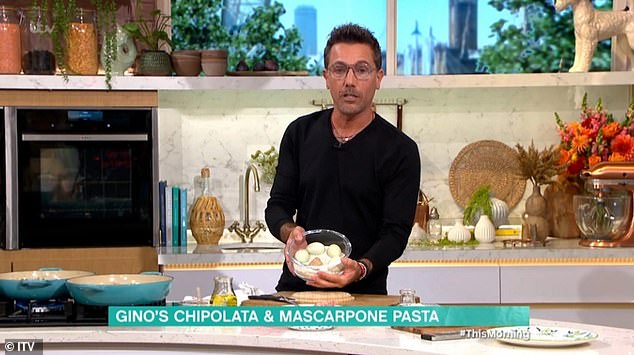 All mine: The chef had requested the expensive truffle at the behest of his son ahead of the cooking segment, and admitted he was taking it home after the show

A fourth viewer commented on the segment coming shortly after Schofield and Willoughby were accused of jumping the queue to see the late Queen Elizabeth II lie in state, avoiding a wait of up to 15 hours.

He raged: ‘Seems the #queuejumping duo @Schofe & @hollywills have taken to trolling their viewers by scoffing a pasta dish with white truffles in it . #ToryCostOfGreedCrisis is not affecting this #Smug pair.’

Willoughby and Schofield have been condemned for ‘skipped the queue’ to see the Queen lying in state earlier this month, with the pair copping backlash from fans and even facing a petition calling for them to be axed.

Last Monday, the petition for the presenters to be removed from television altogether had reached 73,000 signatures.