Emma Thompson appeared in a giddy mood as she stepped out with husband Greg Wise and their daughter Gaia for The Icon Ball at The Landmark Hotel during London Fashion Week on Friday.

The actress, 62, and her offspring Gaia, 21, laughed raucously as they posed at the event organised to raise money for NHS charities.

Star of the silver screen Emma dazzled in her outfit, wearing a black jumpsuit beneath an oversized gold shimmering jacket, while Gaia donned a sparkly purple jumpsuit which she teamed with a matching floral and gold fascinator on her head. 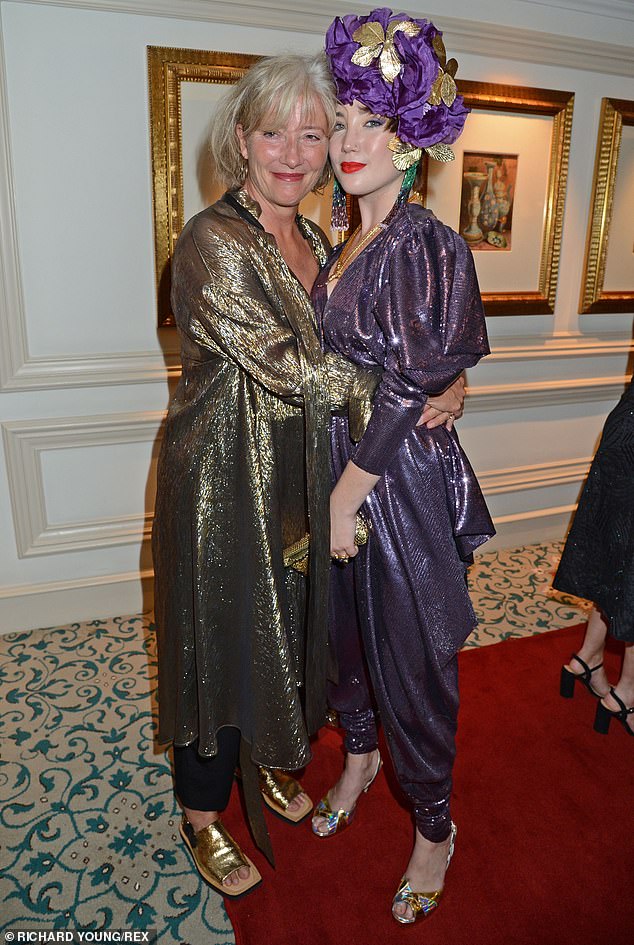 Glitterari: Emma Thompson, 61 , dazzled in a black jumpsuit beneath an oversized gold shimmering jacket while daughter Gaia, 21, donned a sparkly purple jumpsuit at The Icon Ball

Emma’s husband Greg, 55, looked dapper in a black jacket and trousers which he teamed with a white top.

The trio were seen posing together and Emma grinned broadly as her beau pointed at her at the bash.

Gaia could be seen standing between them in her outfit which featured a very daring neckline, with a long silver necklace hanging in between. 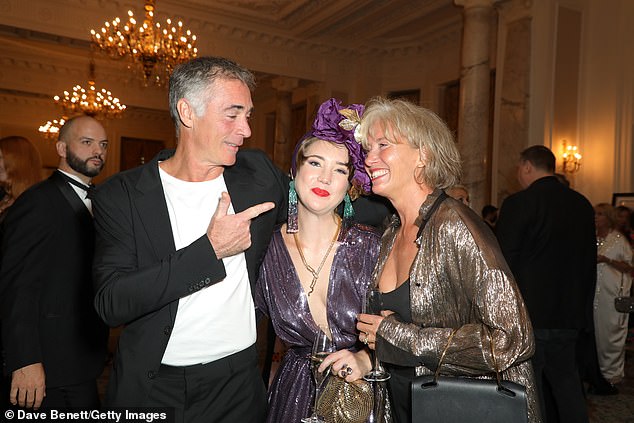 Family affair: The mother-daughter pair looked in a jovial mood as they posed with Emma’s husband and Gaia’s father Greg Wise, 55 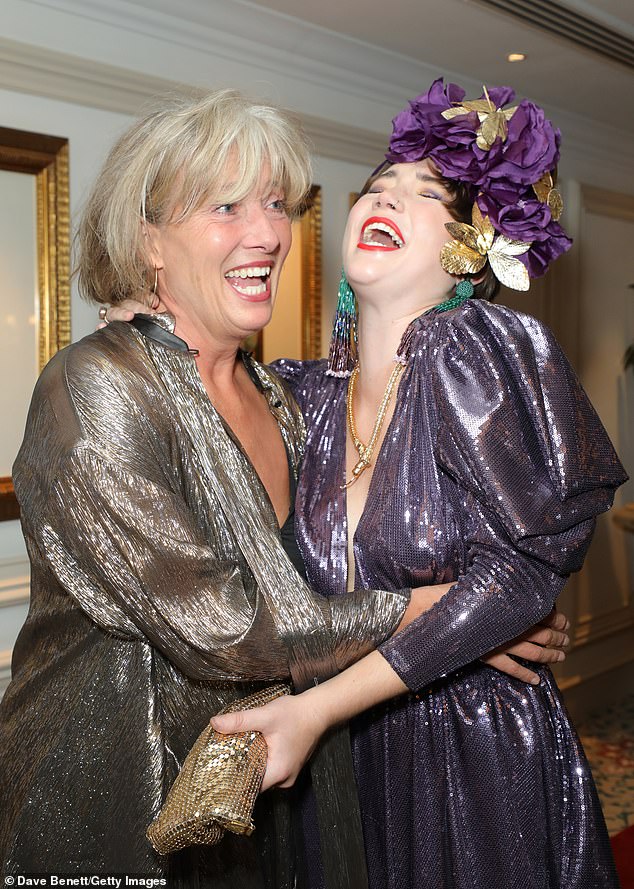 High spirits: Emma and her daughter laughed raucously as they posed at the event organised to raise money for NHS charities

She sported a pair of long pendulum earrings which featured green and purple beads.

Actor Greg is set to take place in Strictly Come Dancing when the new series star on Saturday.

This week he told how wife Emma insisted he take part, with the couple cancelling their first holiday together in seven years so he could appear on the BBC ballroom dance contest. 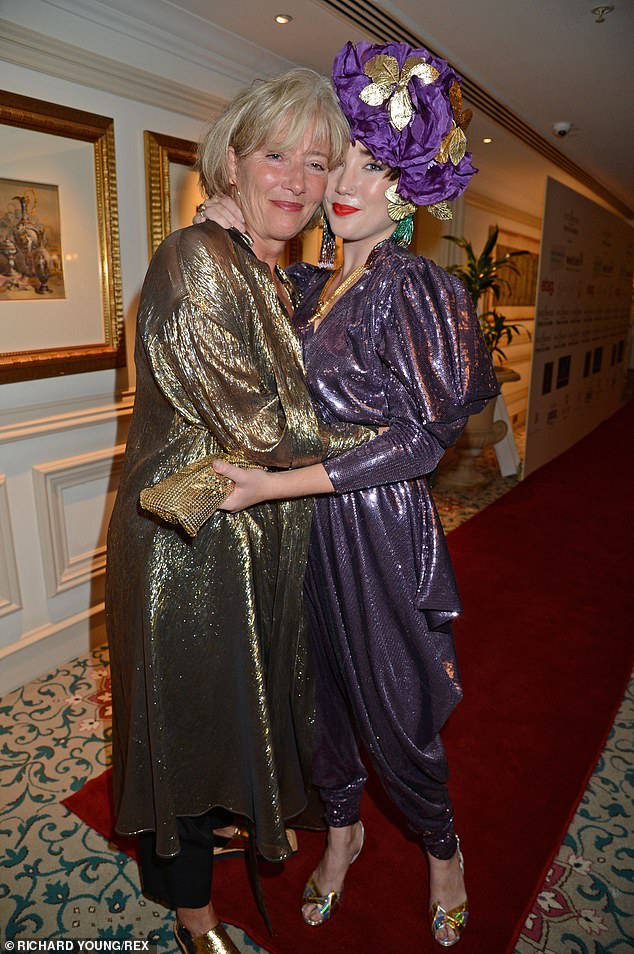 Proud parent: Emma stood with her daughter Gaia in her arms as Gaia had an elaborate floral fascinator on her head

Greg, who married Emma in 1992 after they co-starred in Sense and Sensibility, told MailOnline: ‘I told my dear lady wife when they asked me and I said no and she said ”you’re mad you’ve got to do it!”

‘She’s been filming solidly since January and she finishes her last film tomorrow. We were going to have her first holiday together in seven years, but over the five minute conversation the autumn was kicked into the grass and she’s thrilled she’ll be able to relax and support me.’

Greg also revealed that he has spoken to his pal, and Strictly 2020 winner, Bill Bailey about taking to the dancefloor, after the comic wowed viewers and scooped the glitterball with Oti Mabuse last year. 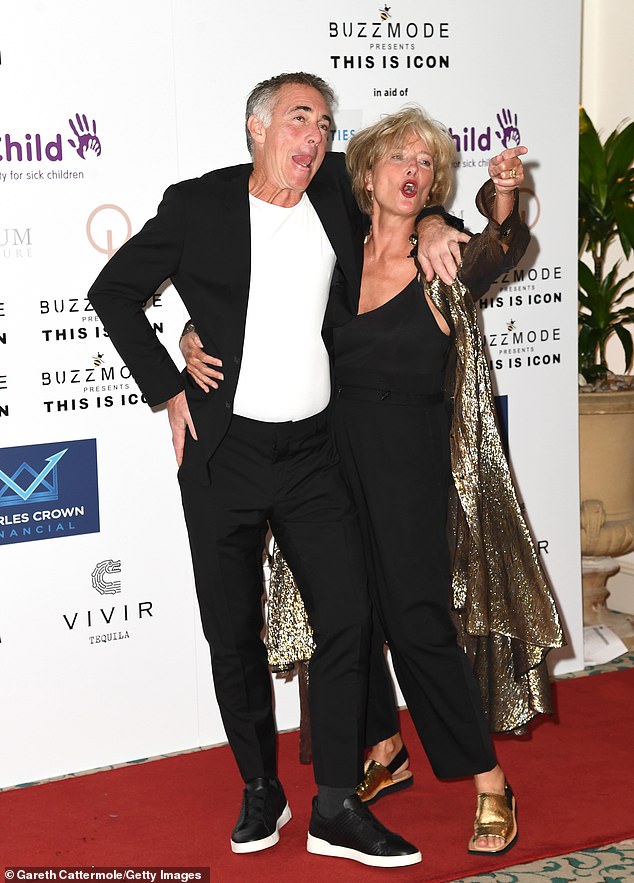 Laugh a minute: Greg, who married Emma in 1992 after they co-starred in Sense and Sensibility, looked delighted to be out as the posed on the red carpet 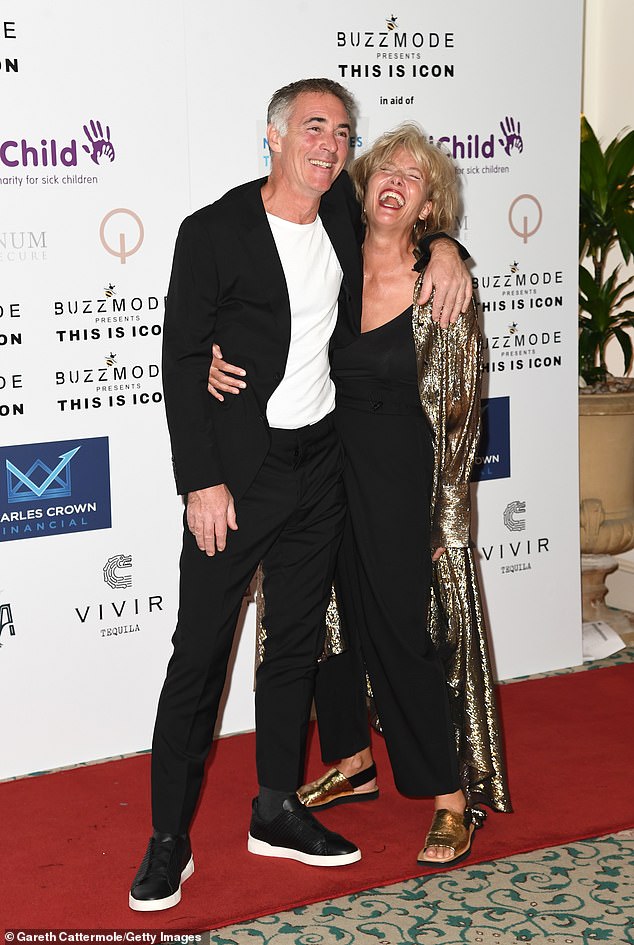 World of entertainment: Emma and her husband larked about with awaiting photographers at The Landmark Hotel before rubbing shoulders with fellow celebrities 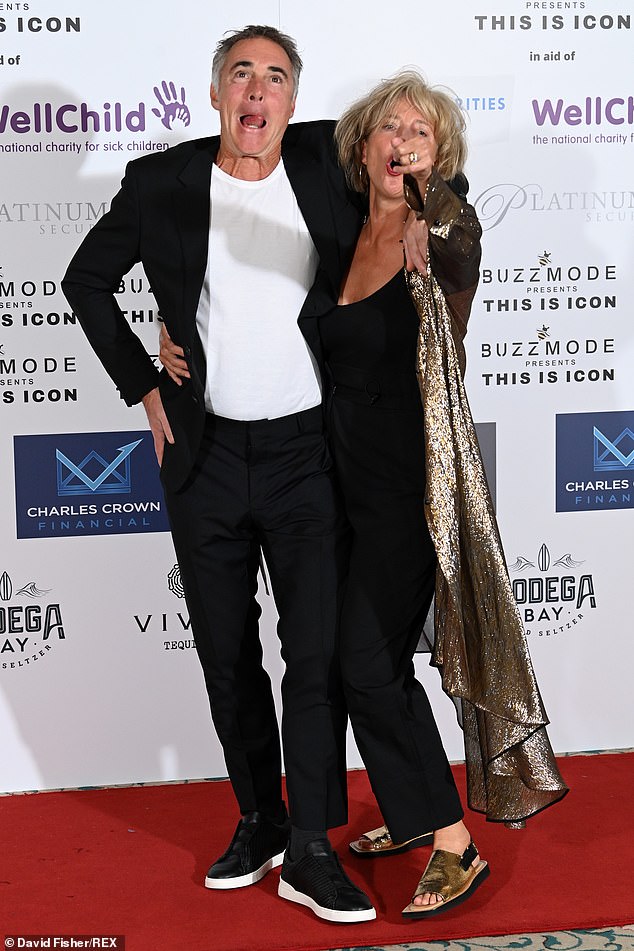 Here’s looking at you: Emma pointed at the camera as she posed while Greg pulled a face alongside her 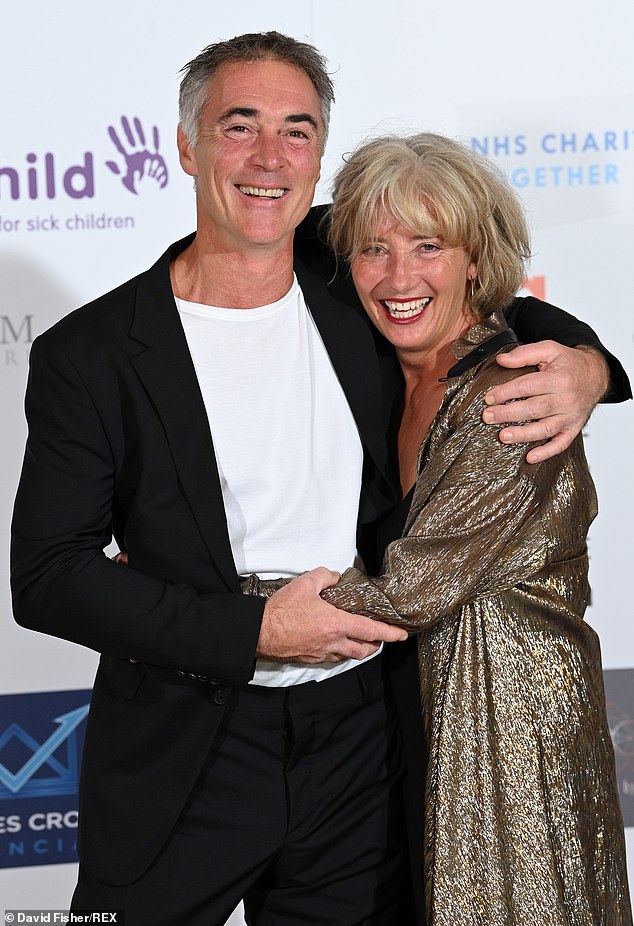 Loved-up: Emma looked content in the company of her husband as the couple stood with their arms around each other 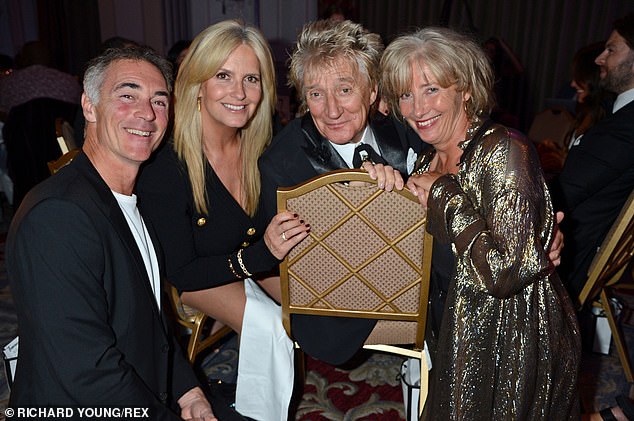 A-list crowd: Emma and Greg posed with rocker Rod Stewart, 76, and his wife Penny Lancaster, 50, at the bash 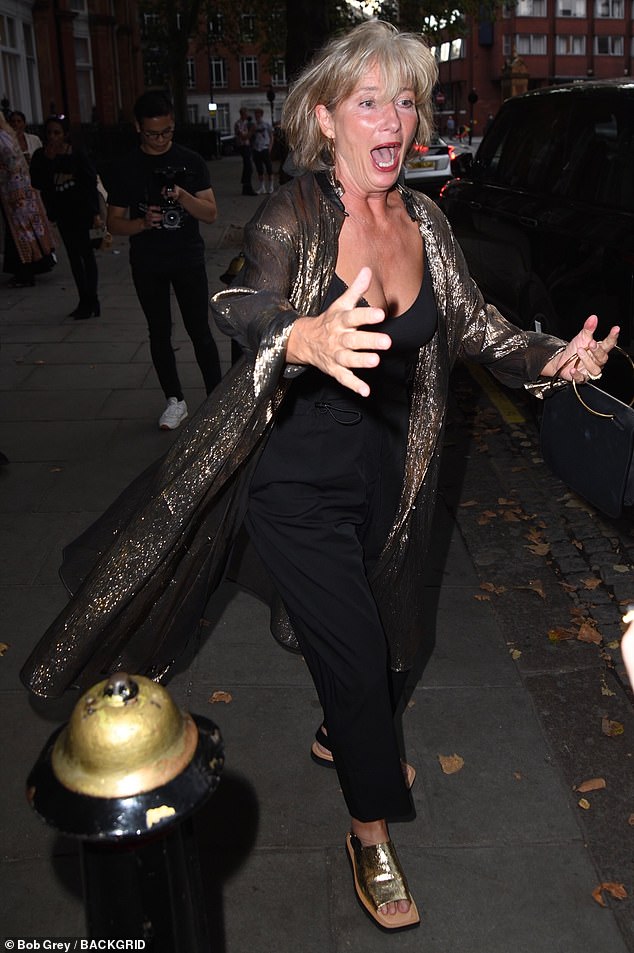 You look happy! Emma was in equally high spirits as she made her way into the star-studded ball during Fashion Week

Lady in red: Gaia later took to the catwalk in a bold ruby gown that boasted several tiers

He said: ‘When I was first asked to do I contacted him and he said ”you’ve got to look after your feet” and I’m interested in working hard and trying something completely new and seeing if this body will do what’s asked of it.

‘One of the things I’ve done is get my patent ballroom shoes ready because I think he had quite a problem with blisters, I think it was known as shoegate, I’m trying to get my feet as hard as possible.’

Greg had previously revealed that he decided to sign up for the show as a tribute to his late sister, adding that she was a real ‘disco diva’ who adored the primetime show. 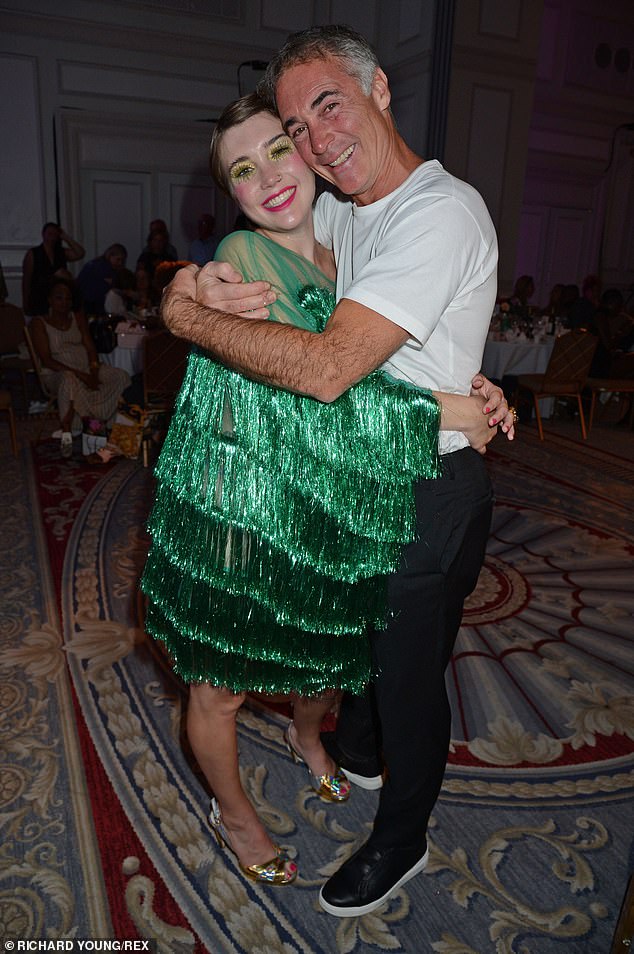 What a show: Greg proudly gave his daughter Gaia a hug as they attended the afterparty following her catwalk appearance 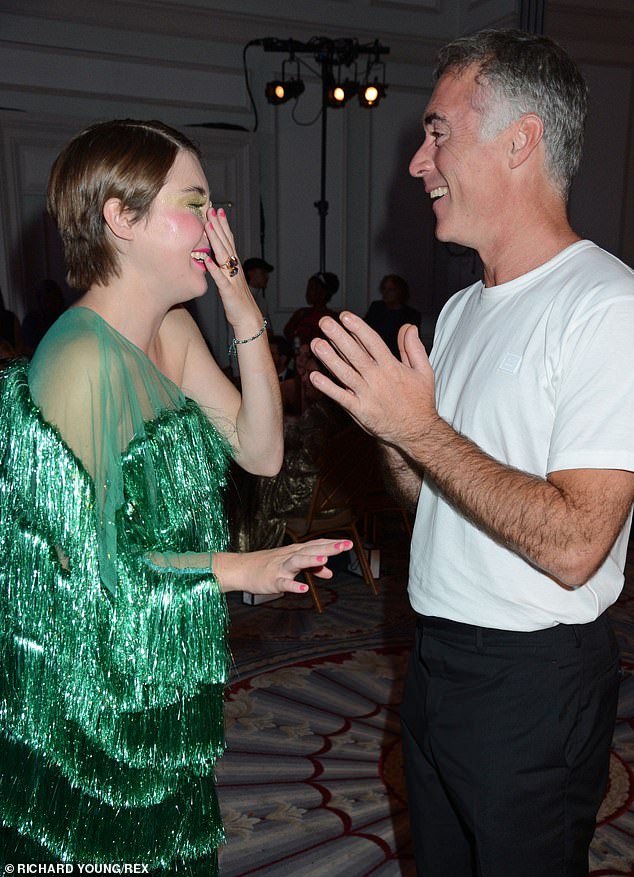 Giggles: The pair could be seen laughing as they enjoyed their evening together, an eventful one for the family 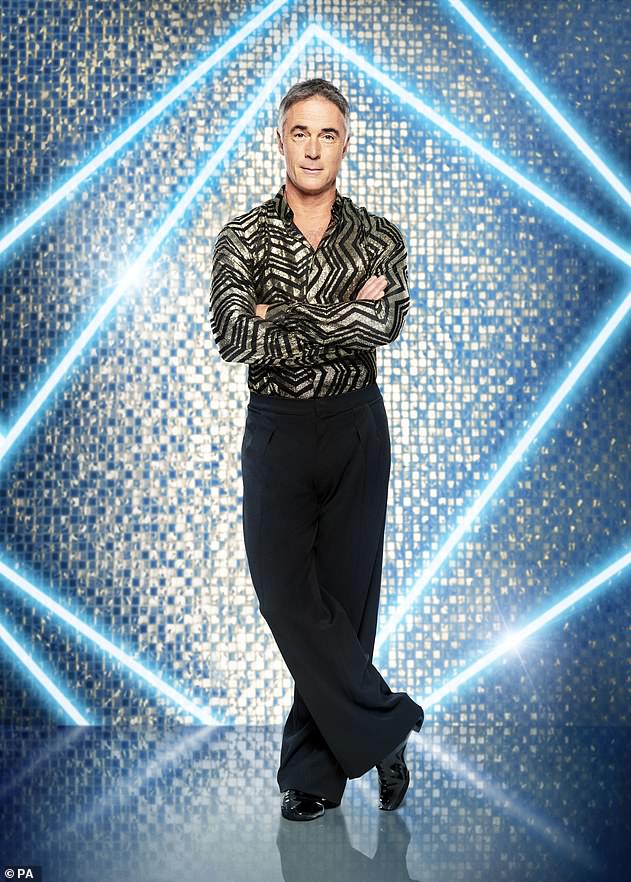 ‘She said I’d be mad not to do it!’: Strictly’s Greg revealed Emma convinced him to sign up for the new series – and even cancelled their HOLIDAY so he could join the lineup

He told MailOnline: ‘I was asked and I thought ”no absolutely I can’t do it,” and then I thought about it, and almost exactly five years after my sister died we’ll be doing our first routines.

‘My sister was a real disco diva she was the dancer in the family and she left this world in a glitterball coffin, so as this world is all glittery I have to go it for her.’ 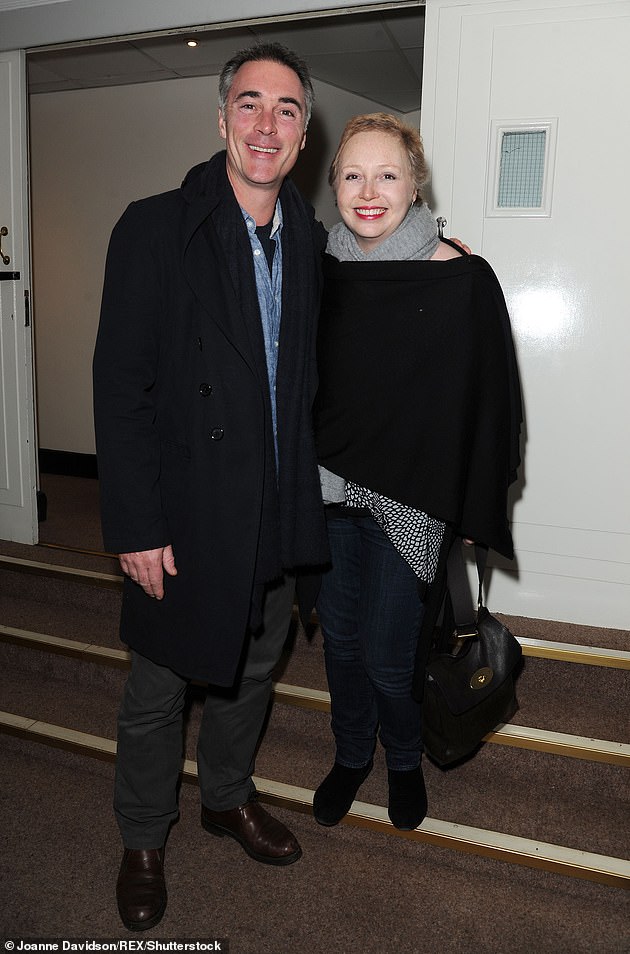 Touching: Greg added that he is taking part in this year’s Strictly in honour of his late sister Clare who was a huge fan of the show before her death in 2016 from cancer (pictured in 2014)

Jamie Lynn Spears includes a ‘text message’ from sister Britney Spears in her new book…. as she accuses the pop star of ‘throwing her to…