The 49-year-old actor wore a long sleeve sky blue Henley shirt with blue jeans and black New Balance sneakers. He topped off his ensemble with a black ballcap and dark sunglasses and sported a beard on the weekday excursion.

Brown, a one-time model, donned a country-inspired ensemble of a peanut brown top over a merrigold top with light denim shorts and knee high western boots with grey socks. 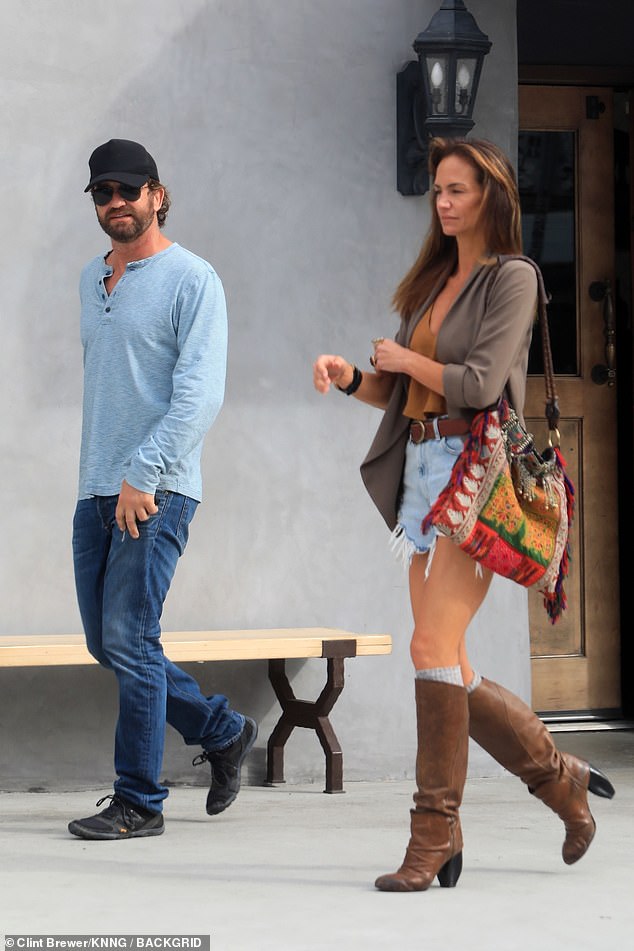 Out and about: Gerard Butler, 49, and stunning girlfriend Morgan Brown enjoyed lunch at the restaurant Crossroads in West Hollywood, California on Wednesday

The outing comes weeks after the actor was seen packing on the PDA with a mystery woman following a dinner date in Los Angeles.

The A-lister and the statuesque beauty have been dating on-and-off for more than five years, with their initial joint outing coming in September of 2014 in Malibu, California.

They parted ways in November of 2016, Page Six reported, with a source telling the outlet it was difficult for the 300 actor to remain in a relationship as ‘girls throw themselves at him. 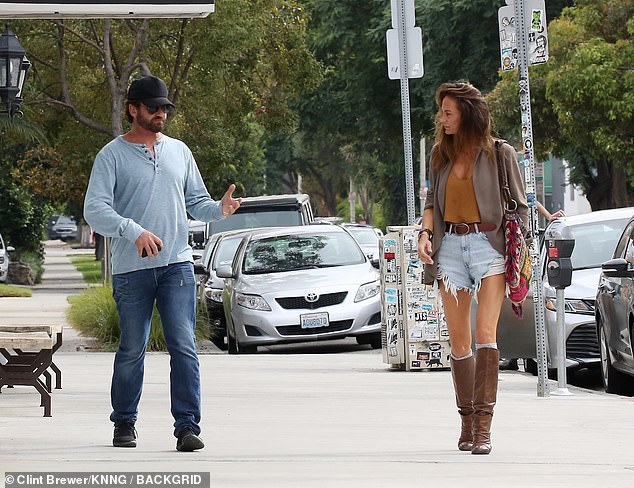 Deep ties: The A-lister and the statuesque beauty have been dating on-and-off for more than five years 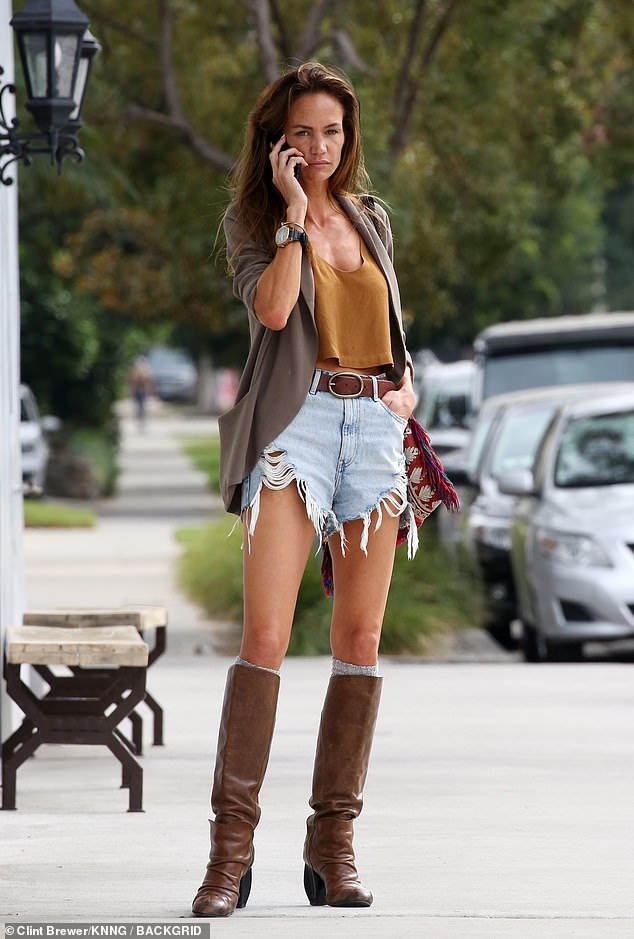 Breathtaking: Brown, an interior designer by trade, has a background in modeling

‘It’s hard for him to constantly say, “No. Get away from me. I have a girlfriend,”‘ the source added.

The Den of Thieves star and Brown were on-and-off in 2017, with a July beach excursion in Tulum, Mexico, followed by a split that fall, People reported.

But things renewed between Brown and the Scottish star by last October, according to Page Six, describing an intimate dinner between the couple at New York City’s Omar at Vaucluse. 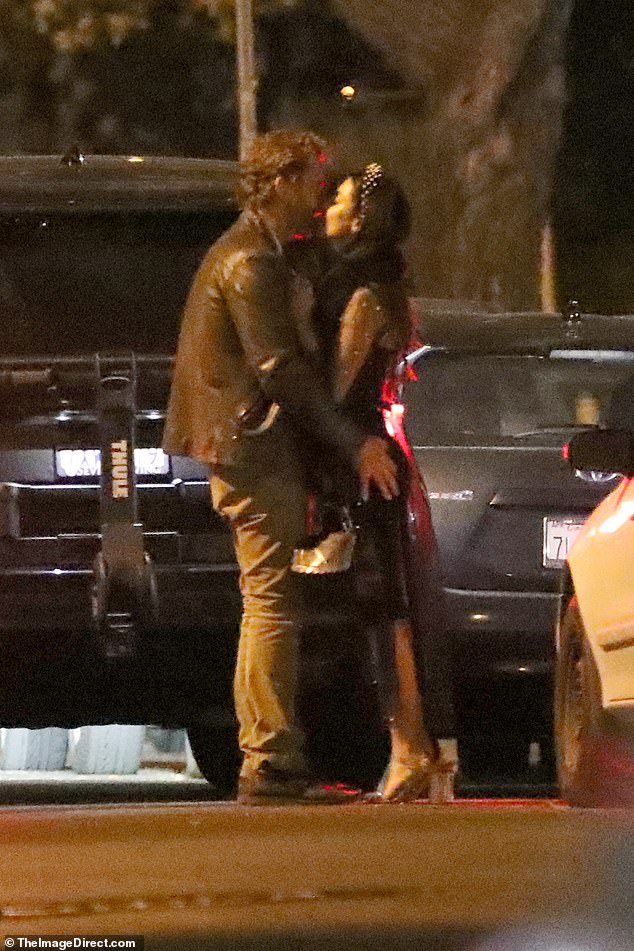 Who’s that? Earlier this month Butler packed on the PDA with a mystery brunette in Los Angeles

While ‘Butler had every woman in the room cranking her neck to try to catch his eye,’ he was solely focused on Brown, the source said.

The couple was snapped together this past August looking happy at the Los Angeles premiere of his film Angel Has Fallen. 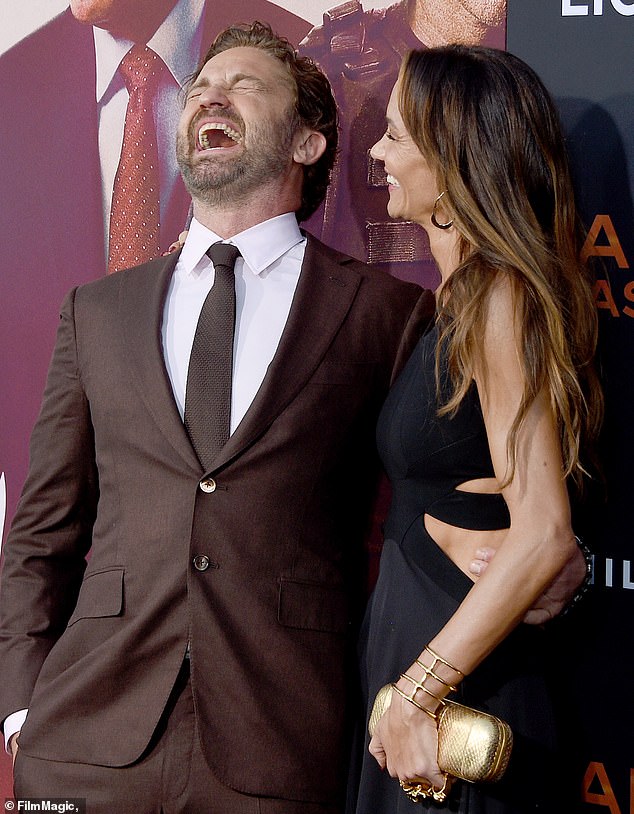 Chemistry: The couple was snapped together August 20 looking happy at the LA premiere of his film Angel Has Fallen

‘How does anyone look that gorgeous watching telly?’ Susanna Reid, 49, sends Gogglebox viewers WILD as she makes her sofa debut in sizzling leopard print…