‘I feel really out of it’: Frankie Bridge reveals she’s having ‘bad withdrawals’ from her antidepressants after forgetting to order more

Frankie Bridge has revealed that she’s been having ‘really bad withdrawals’ from her antidepressants.

The Saturdays star, 32, explained that she forgot to order more medication and because of the Bank Holiday weekend has been unable to get any until Wednesday.

Speaking candidly on Instagram Stories about how she was holding up after ‘5 or 6 days’ without her pills, Frankie admitted she was feeling ‘really out of it’. 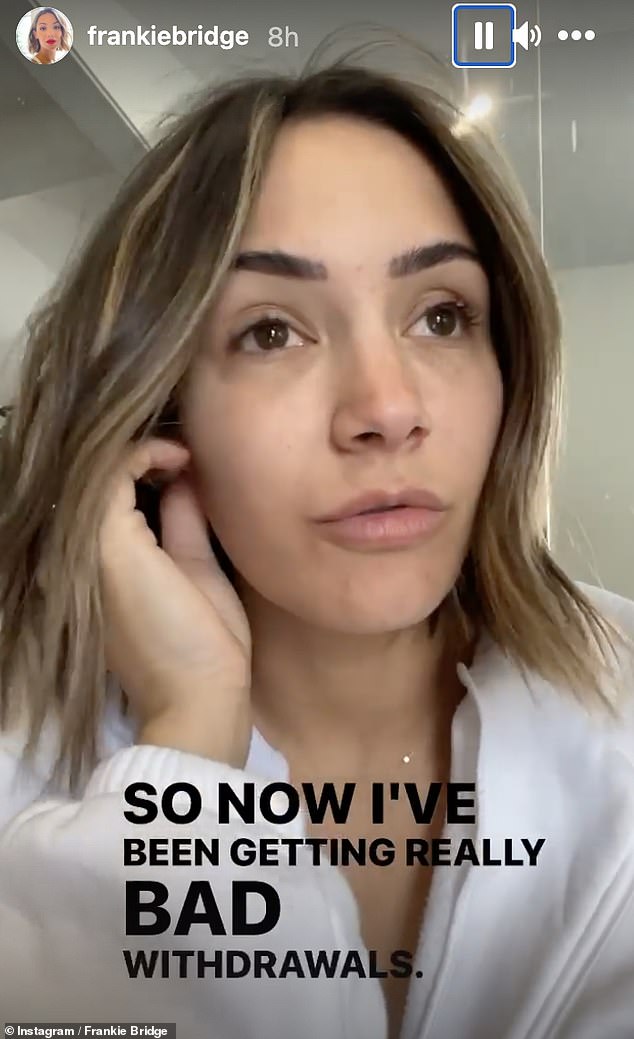 Candid: Frankie Bridge has revealed that she’s been having ‘really bad withdrawals’ from her antidepressants

‘And I still haven’t got them, so now I’ve been getting really bad withdrawals.

‘It’s really weird, the only way I can describe it is you know that first thing when you have had a drink, and your eyes feel a bit funny and your head feels a bit numb and it feels like you’re in a bit of a dream?

‘So I feel really out of it, like I can’t really concentrate on anything and I’m getting bad headaches, I’m tired, I’m feeling sick. Just really not feeling myself.’ 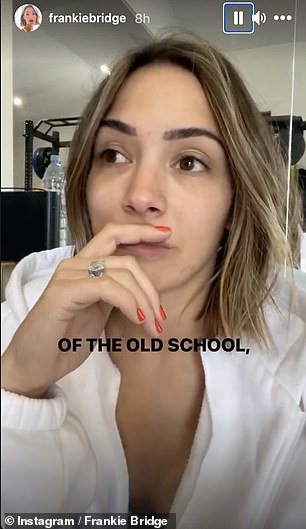 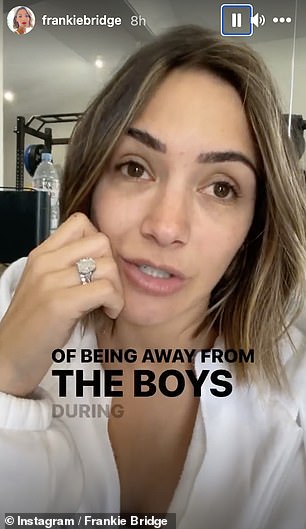 ‘I feel really out of it’: The Saturdays star, 32, said that she forgot to order more medication and because of the Bank Holiday weekend has been unable to get any until Wednesday

Frankie then added that she was due to have more medication delivered during the day and would be taking her tablets as soon as possible.

She told fans: ‘So they’re hopefully being delivered today, which will be 5 or 6 days that I’ve not been on them so I will take them as soon as they come.

‘But I do this all the time. I’ve now set monthly reminders on my phone so hopefully I don’t forget again.’

Frankie also revealed that she’s just started the seven-day break for her pill and is on her period and feeling ‘hormonal’, adding that husband Wayne ‘deserves a medal’ for everything he’s ‘had to deal with over the past week’. 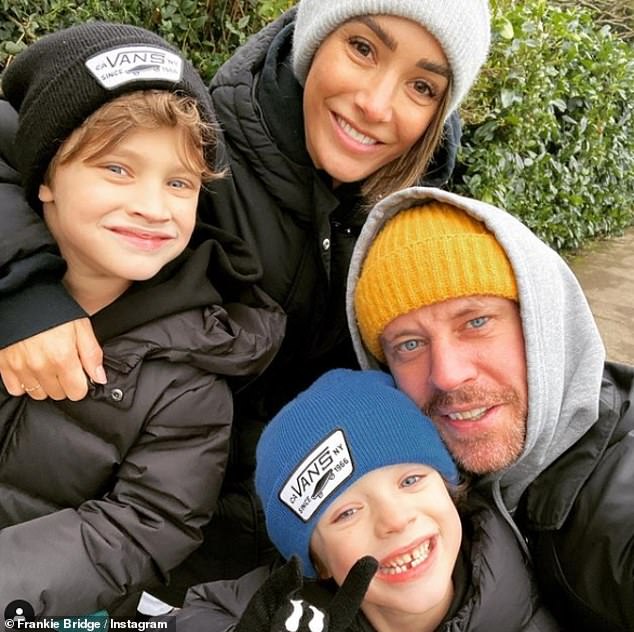 Family: The mother-of-two also told fans that being really busy over the past month has hit her hard, leading her to forget to reorder more antidepressants (pictured with sons Parker and Carter as well as husband Wayne)

Reflecting on the difficult week, Frankie said: ‘I’m going between that feeling of wanting to cry, scream and shout all at the same time.’

She also encouraged followers to always make sure they’re up to date on with their own prescriptions and stocked up as to not risk running out.

The mother-of-two told fans that being busy over the past month has hit her hard, leading her to forget to reorder more antidepressants.

Explaining why she’s not been on social media much for the past few days, Frankie said: ‘I have been in a bad place. I was really, really busy, the last few weeks which I’m really grateful for and all the things I’ve loved and enjoyed.

‘But I haven’t been that busy for so long because of corona and I think it just really hit me, the tiredness and the guilt of being away from the boys in the Easter Holidays and the last day of their old school… 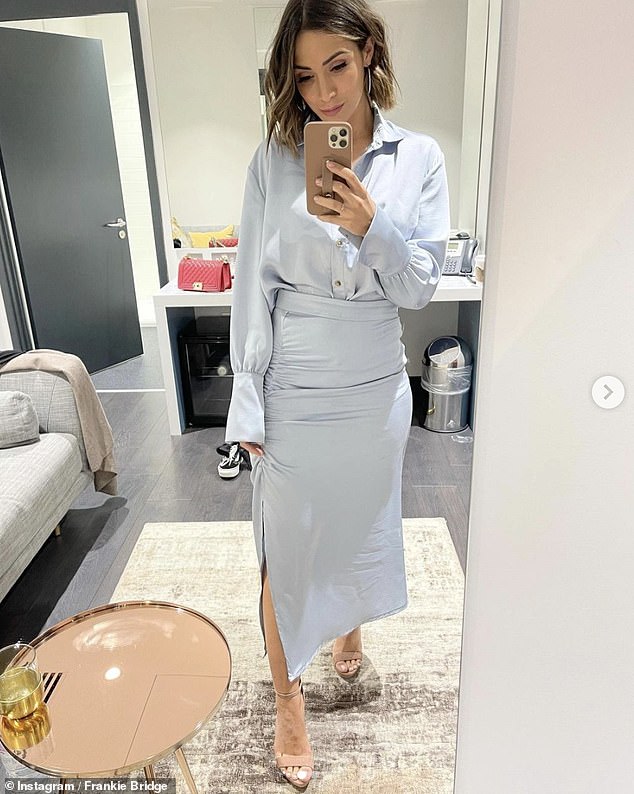 Check those prescriptions: She also encouraged followers to always make sure they’re up to date on with their own medications (pictured ahead of Loose Women on Monday)

‘The house has just been ripped apart, for me it’s been a bit much all at once and I did my usual and just before Bank Holiday realised I’d ran out of my antidepressants.’

Frankie has often been candid about her mental health battles and was named the Mental Health Game Changer winner at Glamour’s Women Of the Year Awards 2021.

Speaking during the virtual ceremony in March, Frankie said: ‘I always say that I was someone who was born anxious.

‘As I grew up in the public eye, I realised that I didn’t have much control over my own life, and it got to a point where I felt like I was coming into work and I was being “Frankie from The Saturdays,” rather than just Frankie.

‘I found I wanted to spend all my time in bed and hide away. That was when I realised that maybe my depression and anxiety had taken over me rather than me having control over it.’

The Saturdays singer previously revealed that she reached a low point during filming for the band’s melancholic track, My Heart Takes Over, in 2011.

She was admitted to a psychiatric ward that same year after suffering from a mental breakdown. Frankie has previously revealed that she had been suffering from depression since the age of 15.

Frankie tied the knot with her partner Wayne, 40, in a private ceremony in 2014 and they share two sons, Parker, seven, and Carter, five. 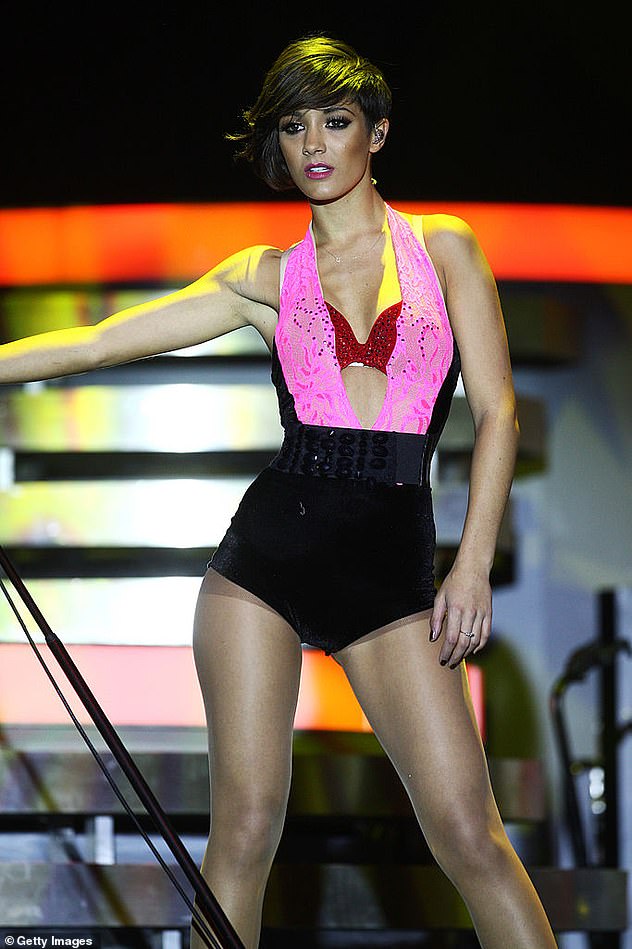 Speaking out: Frankie has often been candid about her mental health and previously revealed that she reached a low point during filming for The Saturday’s melancholic track, My Heart Takes Over, in 2011 (pictured in December 2011)