‘I should never have done it’: Fiona Phillips reveals she REGRETS her stint on Strictly Come Dancing as she reflects on career after turning 60

She celebrated her 60th birthday on New Year’s Day and revealed that it is the first time she has ever felt like a ‘serious adult’.

And Fiona Phillips has admitted that she regrets her stint on Strictly Come Dancing, where she was partnered with pro dancer Brendan Cole and eliminated in week four.

The TV presenter, 60, said she felt self-conscious on the show and that the New Zealand dancer, 44, who was axed from the show this year, was focused on winning. 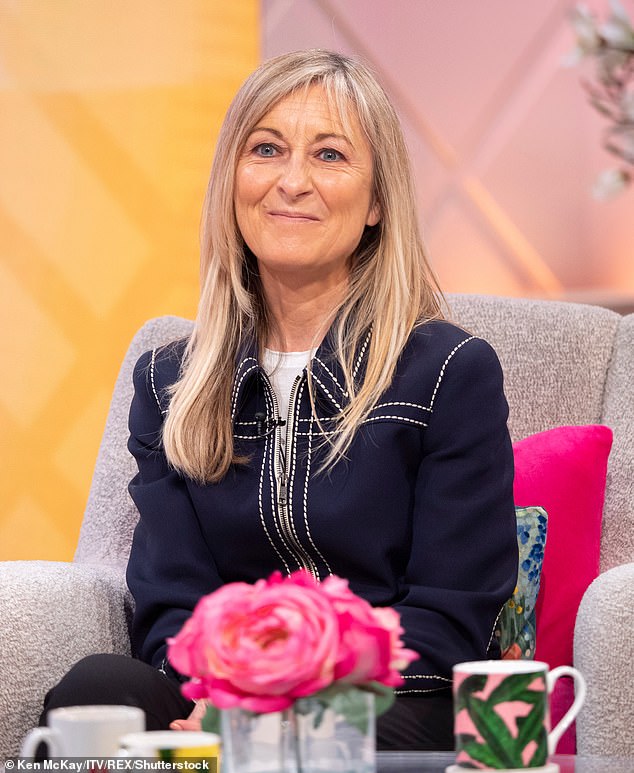 Regrets: Fiona Phillips admitted that she regrets her stint on Strictly Come Dancing in 2005, where she was partnered with pro dancer Brendan Cole (pictured in June 2018)

She told The Mirror: ‘I felt so self-conscious, but I thought, ‘I will have a professional dancer and it’s a nice programme’.

‘But Brendan is a rough old taskmaster and really wanted to be number one or nothing.’

Fiona said she has always hated getting on the dance floor and went as far as insisting that she ‘should never have done’ the BBC dance contest back in 2005.

The GMTV star also reflected on the big moments in her career after her milestone birthday, which she quipped has made her feel like a serious adult for the first time. 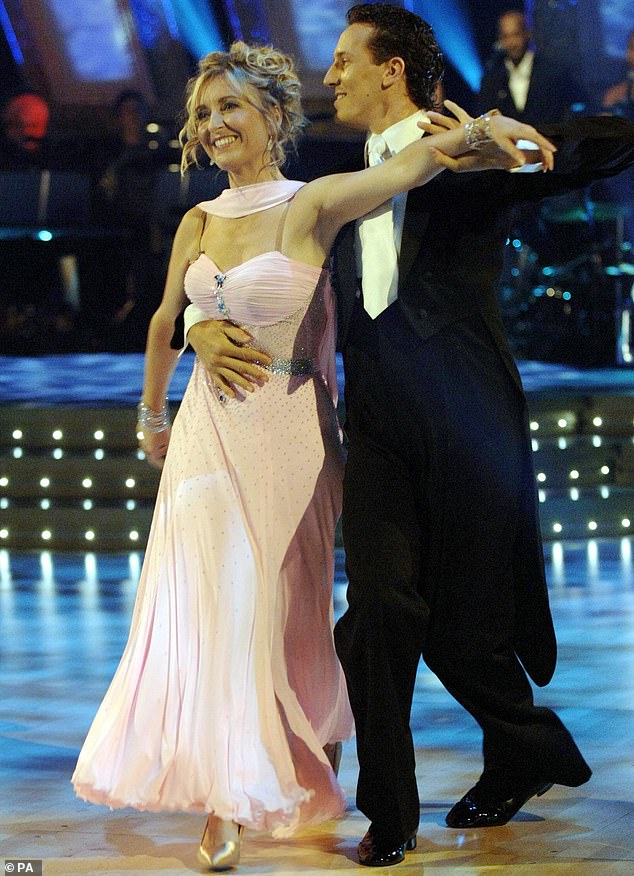 ‘Shouldn’t have done it’: The TV presenter, 60, said she felt very self-conscious on the show and that the New Zealand dancer, 44, (both above) was only focused on winning

And she revealed that one of her very favourite moments from her longtime career was when Richard Gere cheekily flirted with her on the red carpet at the Oscars.

She revealed the American Gigolo actor, 71, had arrived at the awards show with supermodel Cindy Crawford, 54, which didn’t stop him from calling her ‘gorgeous’.

She continued: ‘He was with Cindy Crawford and I was going down the line trying to talk to people and he turned to me and said, “You’re gorgeous”.’

Fiona also had a hilarious encounter with Hollywood star Mel Gibson after meeting him at the 1996 Oscars, where he won awards for best director and best picture.

She described the Lethal Weapon star, 65, as another one of her favourite famous stars to have met during her successful broadcasting career. 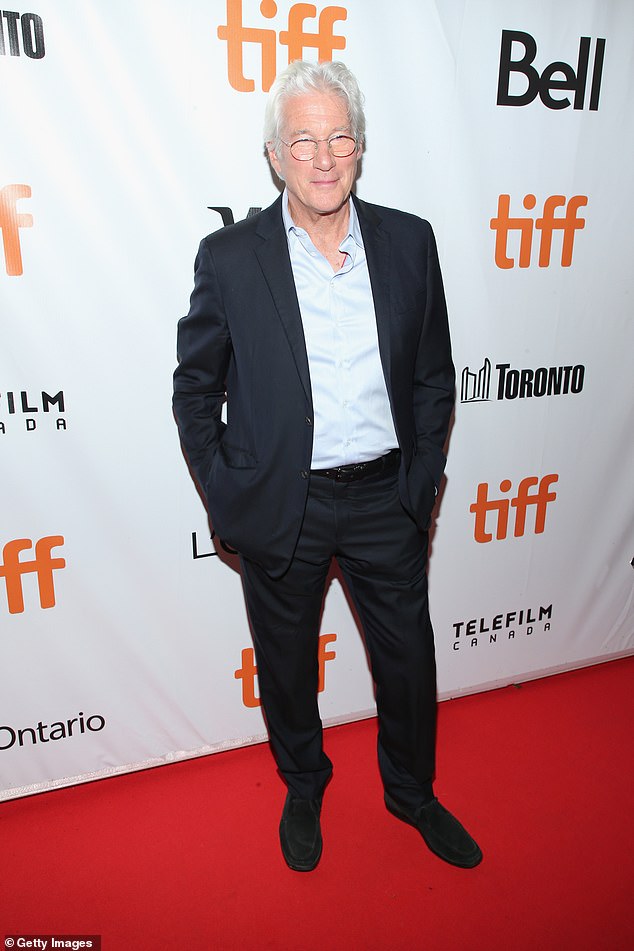 Admirer: But Fiona revealed that one of her favourite moments in her career was when Richard Gere (pictured in September 2017) cheekily flirted with her on the Oscars red carpet

The journalist explained Mel was wearing a kilt for the awards ceremony and admitted she hilariously asked him what men wear underneath their kilts.

The actor replied by saying ‘under where’ so she repeated ‘under your kilt’ – and Fiona admitted the awkward encounter continued for ages before she realised he was saying ‘underwear’.

Fiona also said her pal Victoria Beckham is a delight, while crowning Bette Midler as the most amazing and loveliest person that she has ever encountered.

But she was less impressed with meeting Arnold Schwarzenegger, who she claimed stormed off set when he became annoyed with the camera crew.

She described the Terminator star, 73, as ‘so b****y rude’, as she claimed she saw him sighing and checking his walk before walking off set in a bad mood. 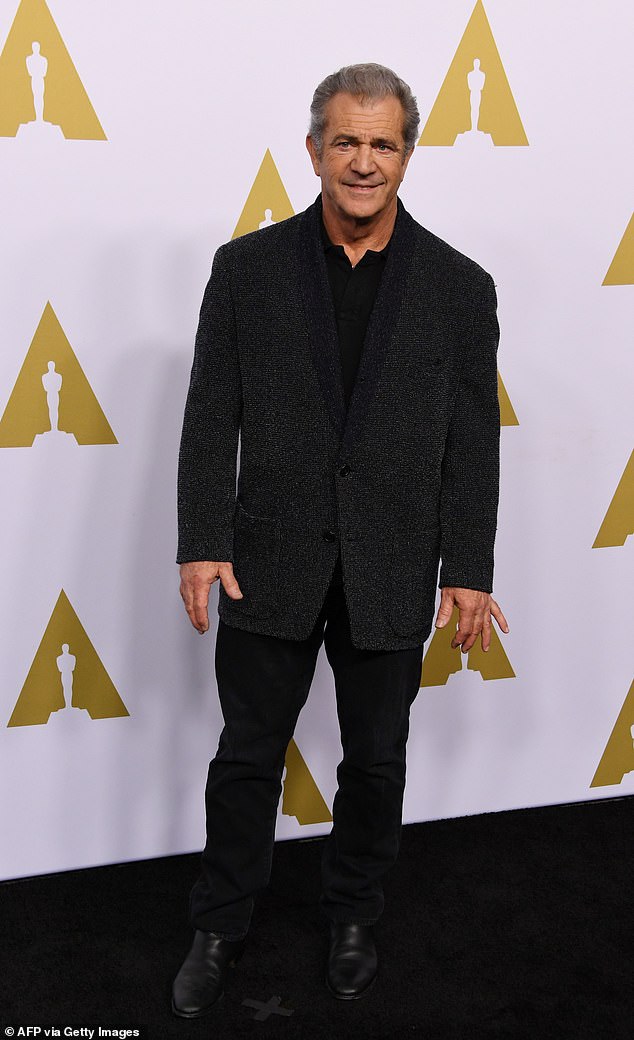 Awkward! Fiona also described a hilarious encounter she had with Mel Gibson back in 1996 (pictured in February 2017), where she asked him what he wore underneath his kilt

While reflecting on her incredible career, Fiona insisted that she has no plans to retire any time soon, as she likes having a reason to get up in the morning.

Fiona, who is married to ITV boss Martin Frizell, also described hosting GMTV with Eamonn Holmes between 1997 and 2005 as the crowning moment of her work life.

In March last year, Fiona revealed that she had contracted coronavirus, detailing her symptoms including an ‘annoying dry cough, aches, pains, lethargy and a whole-body-sized cloak of sweat’.

She became one of the first media personalities to reveal she was suffering from coronavirus. 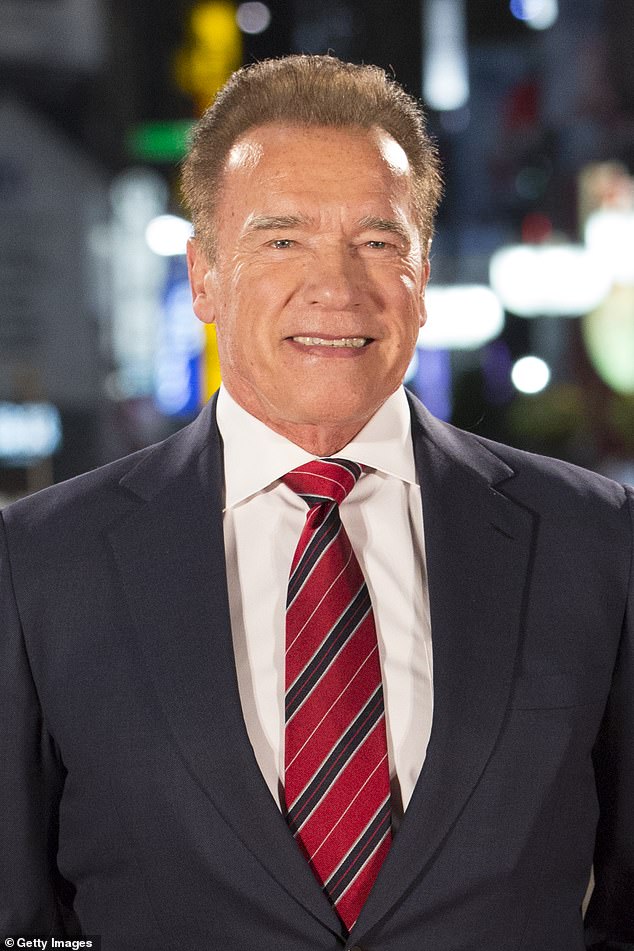 Moody: But she was less impressed with meeting Arnold Schwarzenegger, who she claimed stormed off set when he became annoyed with the camera crew (pictured in November 2019)

She wrote in a column for The Mirror that the ‘unwelcome bed partner’ has brought with it ‘a whole-body-sized cloak of sweat’ and ‘scratchy gut pain’.

The star revealed: ‘Having come bearing gifts such as a fiery sore throat, high temperature/fever, shortness of breath, annoying dry cough, aches, pains, lethargy and a whole-body-sized cloak of sweat – nice – I’ll be doing my best to make sure [COVID-19] doesn’t stay too long either.’

She recounted: ‘The first sign of the nasty bug’s generosity was about a week ago, in the form of a horrible, sort of scratchy gut pain that made me feel full, from my throat, right down through my whole digestive system.

‘It kept me awake all night – it was as if a witch had shoved her twiggy broom up into my alimentary canal and on into my throat, left it there and had then intermittently twisted it.’ 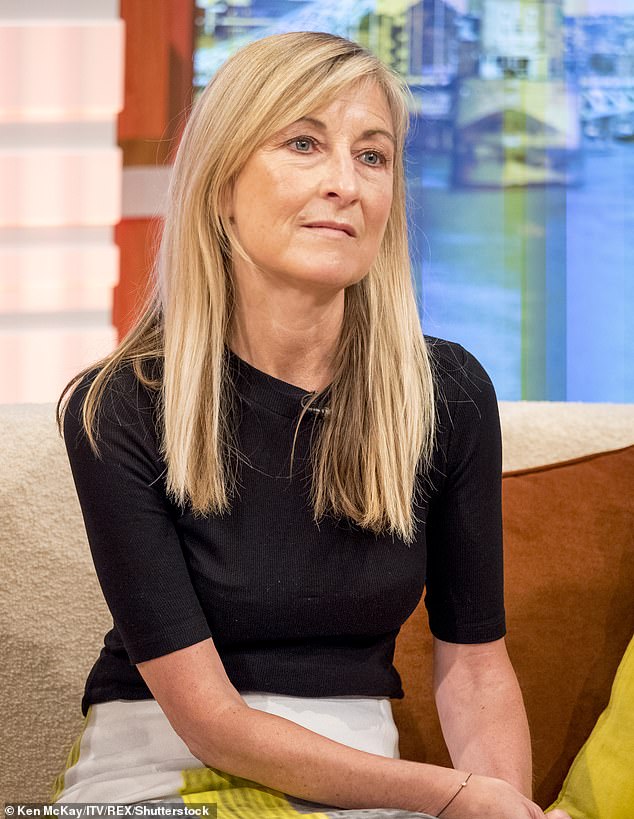 Covid: In March last year, Fiona revealed that she had contracted coronavirus, detailing her symptoms including an ‘annoying dry cough, aches, pains’ (pictured in August 2017)

She first revealed she had coronavirus on March 20 after suffering a ‘sore throat, dry cough and headache’.

The former GMTV host took to Twitter to share the news as she described the illness as ‘not very pleasant’.

Sharing the news on Twitter on Friday, Fiona wrote: ‘I am in bed with #coronvirusuk It’s not a very pleasant bedfellow, but nothing more than sore throat, dry cough, headache & tiredness. As long as it stays that way….DON’T panic!’

But Fiona was quick to reassure fans that she wasn’t in too much distress despite her diagnosis – something that clearly changed as the weekend went on.

Fiona is best know for presenting GMTV and has regularly guest hosted Lorraine. 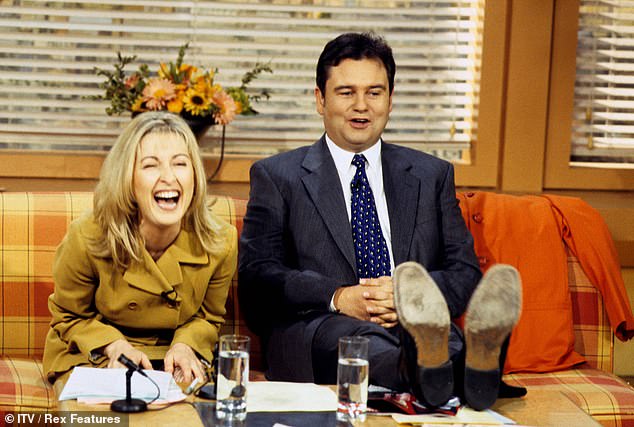 Successful star: Fiona is best know for presenting GMTV alongside Eamonn Holmes between 1997 and 2005 and has regularly guest hosted Lorraine