‘I’m not a man and I’m not white, so I wouldn’t think to do that’: Eva Longoria reveals she ‘put on her male privilege pants’ to demand directorial role

Eva Longoria has revealed she obtained her latest directing job after she channelled being a white man.

The actress, 45, was pitching to head up Flamin’ Hot, a biopic about the man who invented Cheetos.

Before the interview, she revealed she was given advice from her Desperate Housewives producer Brian Tanen which helped her land the job. 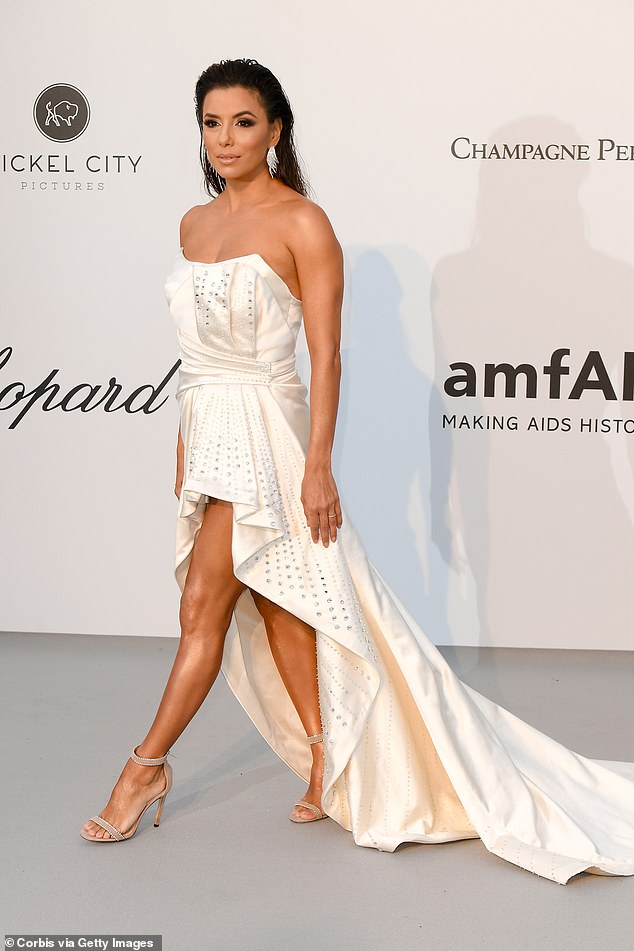 Changed attitude: Eva Longoria, 45, has revealed she obtained her latest directing job after she channelled being a white man

‘And I thought, “Oh my gosh, yeah! I’m not a man and I’m not white, so I wouldn’t think to do that”. It was a change in approach to every sentence that came out of my mouth. Because as a woman, we want to be amenable. We want to be seen as cooperative.’

The Hollywood beauty also discussed why she showed off her grey hairs to her Instagram followers last month. 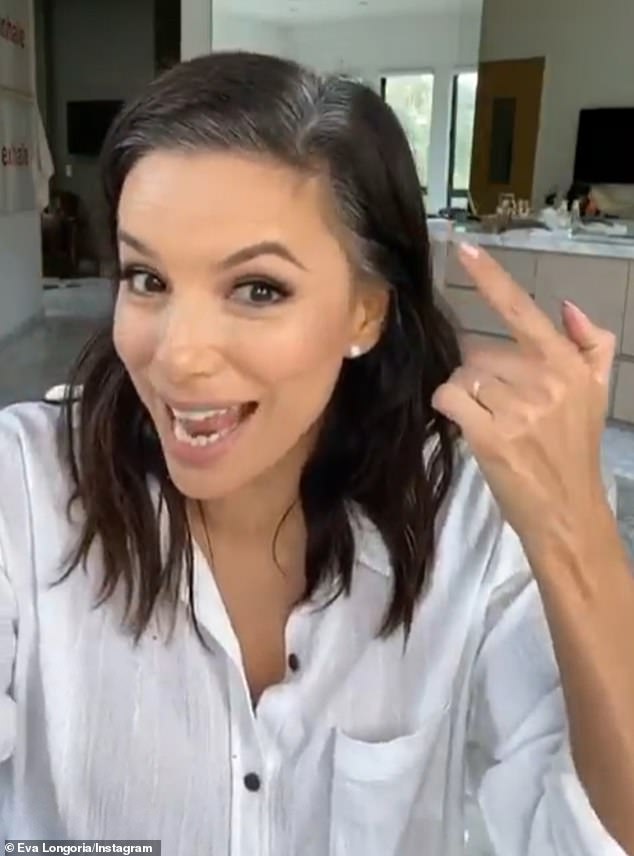 Hair me out: Eva shared an honest moment with fans last month when she unveiled her grey hair in a video posted on her Instagram account

She said: ‘I always say, “Every time I’m on a red carpet, my look is an illusion”. Those aren’t my lashes and that isn’t my hair colour or my cleavage. I’ve always been open to people. There’s nothing scary about grey hair, you can fix it.’

The star, who married Joe Baston in 2016 and shares a son with the Mexican businessman, also opened up about her difficulties breaking into the acting world.

She said she would do nine auditions a day, changing outfits between them, as she desperately sought to break into Hollywood. 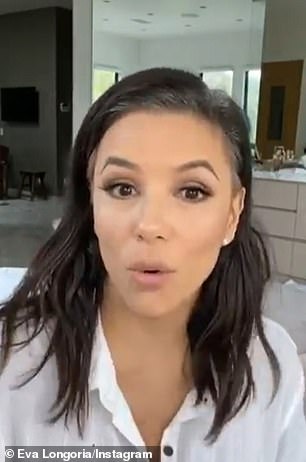 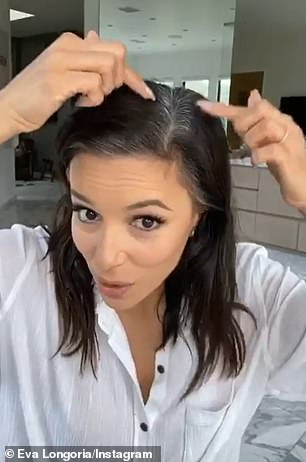 Tresses: The 45-year-actress displayed the lighter tufts of hair to her almost 8million followers

Eva worked at the time as a recruitment consultant on the side but would audition for every role going, including ‘hookers’, so she could get her break.

Her breakthrough soon came when she was cast as Gabrielle Solis in US hit Desperate Housewives, which played from 2004 to 2012.

She said it was the last audition of the day and hadn’t even had time to read the full script, but still impressed the show’s producers and won the coveted role.

The actress also revealed her mother instilled in her a pride of her Latina heritage from a young age. 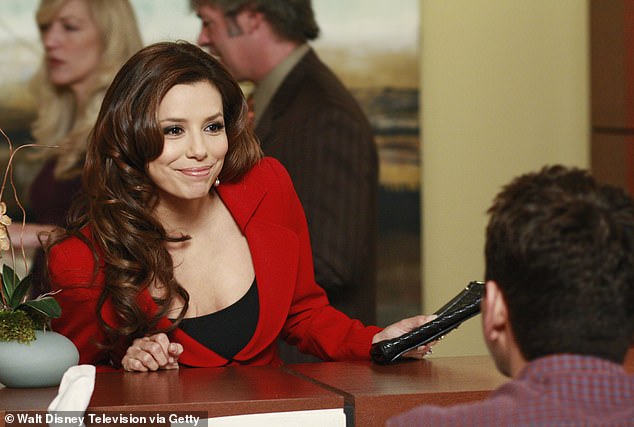 Breakout role: The actress stared as Gabrielle Solis in Desperate Housewives from 2004 to 2012

When Eva, who was raised in Texas, was teased on the bus for eating a bean taco when everyone else was eating Pop Tarts, her mother packed her two bean tacos the next day, telling her never to forget where she came from.

This week, the actress and her husband celebrated their four-year wedding anniversary with a socially-distanced ‘front yard flamenco’.

Eva uploaded a series of posts to Instagram on Thursday to mark the milestone and praised partner José Antonio Bastón as ‘the kindest soul I have ever known’.

She looked radiant as she slipped into a black linen maxi dress and went bare foot to enjoy a live performance from a flamenco band at her home. 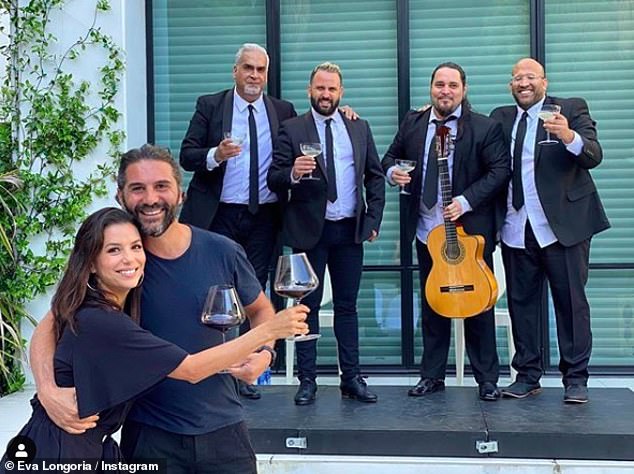 Inseparable: Eva Longoria, 45, and her husband have celebrated their four-year wedding anniversary with a socially-distanced ‘front yard flamenco’

The pair swilled glasses of red wine as they listened to the music but their one-year-old son Santiago stole the show as he danced enthusiastically.

Eva uploaded snippets of the musical escapade alongside a caption that read: ‘Wow what a wedding anniversary [red heart].

‘Thank you @manuelguitierrez6 and @flamencodistrict for helping us celebrate our anniversary! 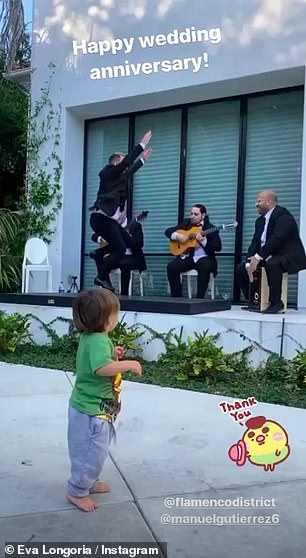 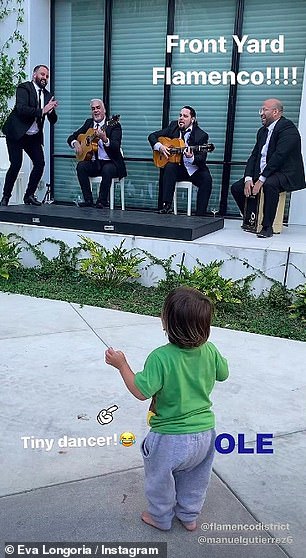 Tiny dancer: The pair swilled glasses of red wine as they listened to the music as their one-year-old son Santiago also looked to be enjoying the performance