Emily Ratajkowski made a fashion statement as stepped out to run a few errands in the heart of New York City earlier on Saturday afternoon.

The supermodel, 31, donned a pair of form-fitting pants while adding a brown, faux leather coat to stay warm in the cooler, fall temperatures.

The beauty recently commented on her relationship status amid rumors that she was currently dating Brad Pitt after filing divorce from her estranged husband, Sebastian Bear-McClard, due to alleged cheating rumors. 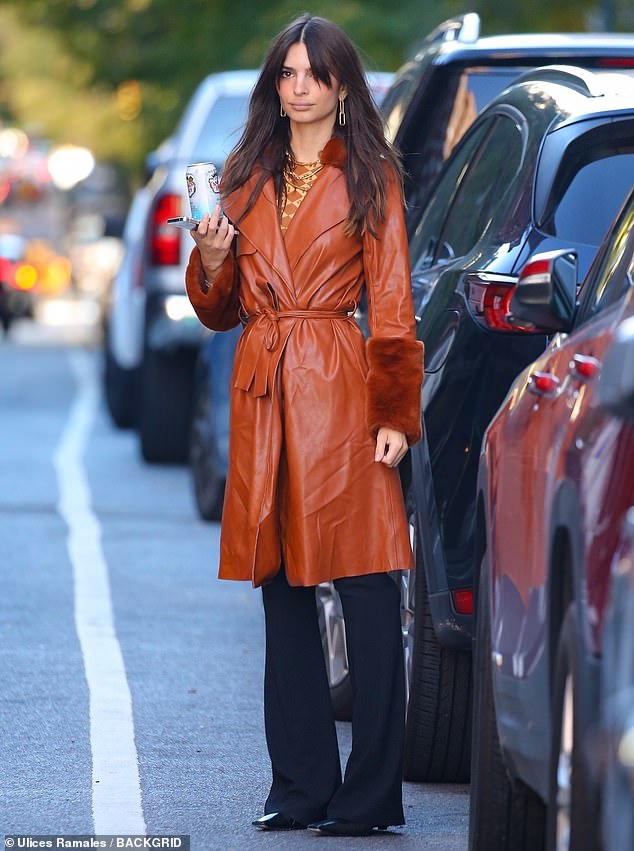 Stunning: Emily Ratajkowski, 31, turned heads in a stylish ensemble as she stepped out in New York City earlier on Saturday

The Gone Girl actress kept her look elegant and stylish as she enjoyed an outing in the big apple.

The fashionable outwear piece was also comprised of soft fur fabric on the cuffs and neckline. A belt of the same color and material was tied to better accentuate her slim waist. 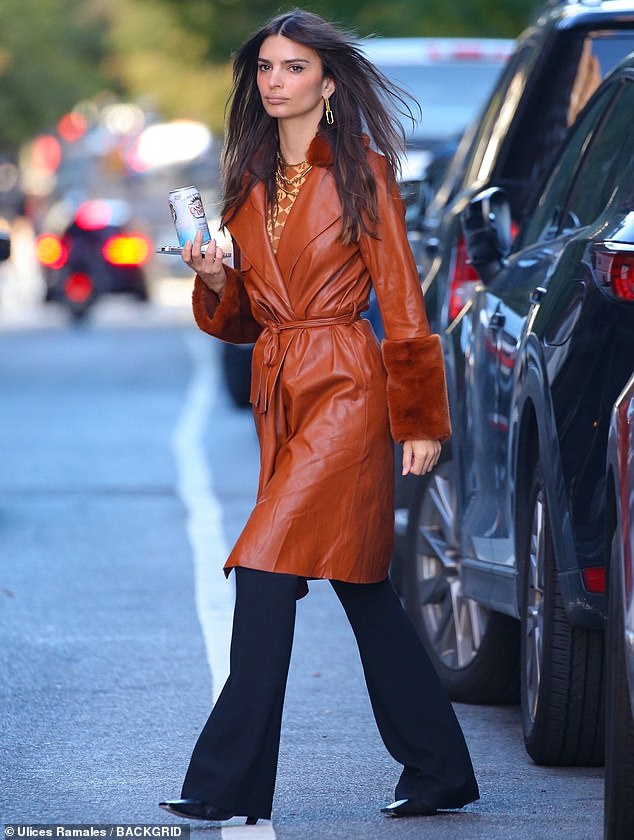 Weekend outing: The supermodel appeared to be in good spirits as she spent time out and about in big apple on Saturday

The author accessorized her ensemble by adding a pair of gold, dangly chained earrings along with a gold-chained necklace.

Her dark hair was parted in the middle and flowed down straight past her shoulders, with her bangs lightly resting on the sides of her forehead.

Emily’s makeup was classically done, with a touch of black mascara around her eyes and a nude-colored lip balm.

She opted to not carry any heavy bags or purses with her during her outing, and instead was seen balancing her phone in her right hand.

The actress and model was also pictured sipping on a refreshing drink from a Canada Dry can as she walked about the city. 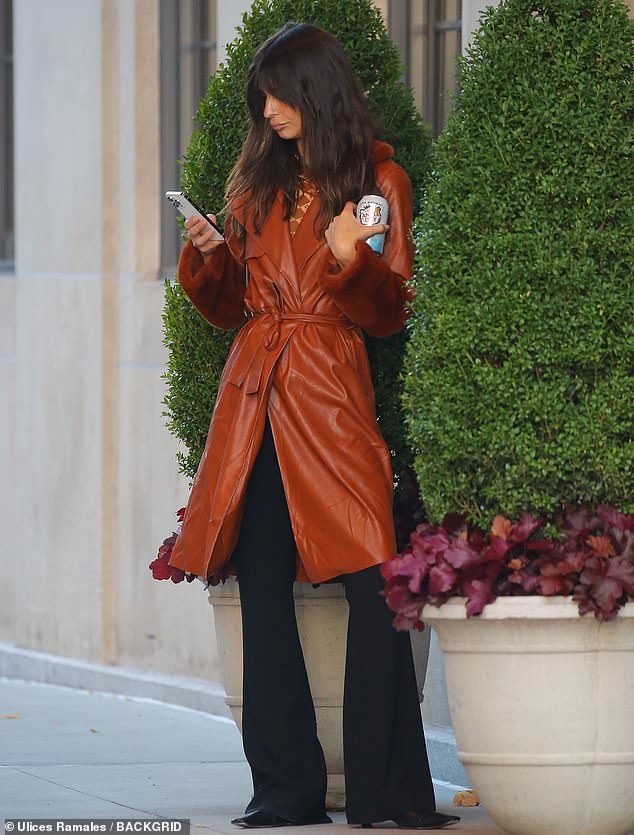 Taking a break: During her brief afternoon stroll, the mother of one was spotted checking her phone as she sipped on a refreshing drink 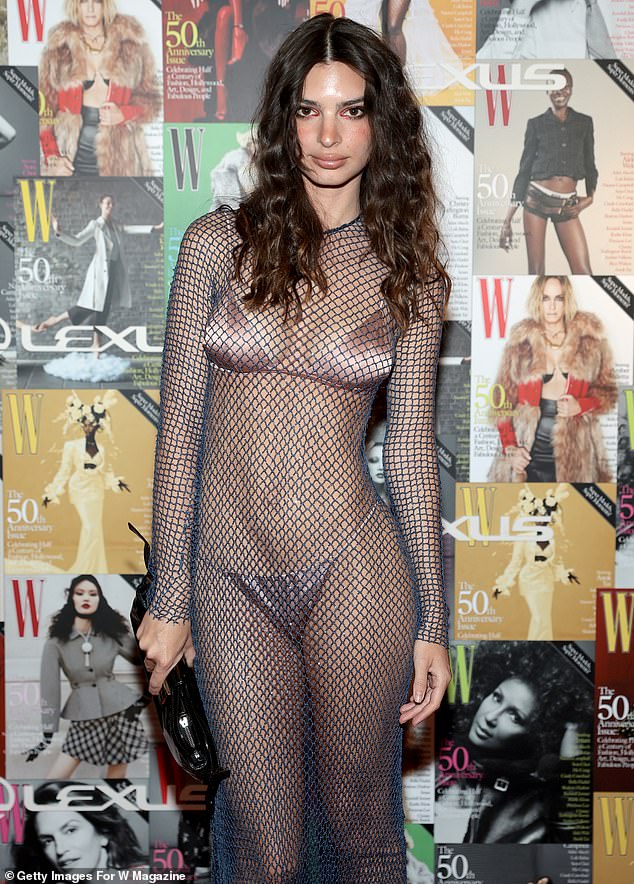 The businesswoman recently opened up to Variety on a number of different topics, including talking about her relationship status with recent rumors circulating that she was dating Brad Pitt.

The model recently filed for divorce in September from her estranged husband after being married for a total of four years.

‘One of the things I write about in the last essay of the book is about control and kind of understanding that one of the best ways to actually be happy and have some semblance of control is letting go,’ Emily explained to the publication, referencing to her book called, My Body.

She then added, ‘I’m newly single for basically the first time in my life ever, and I just feel like I’m kind of enjoying the freedom of not being super worried about how I’m being perceived. 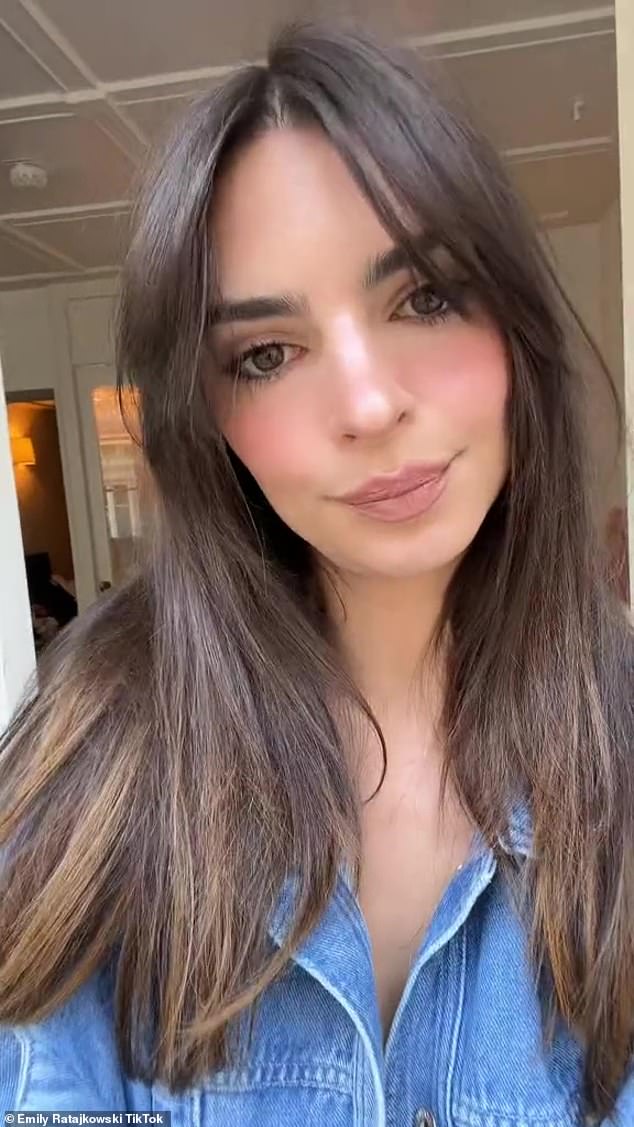 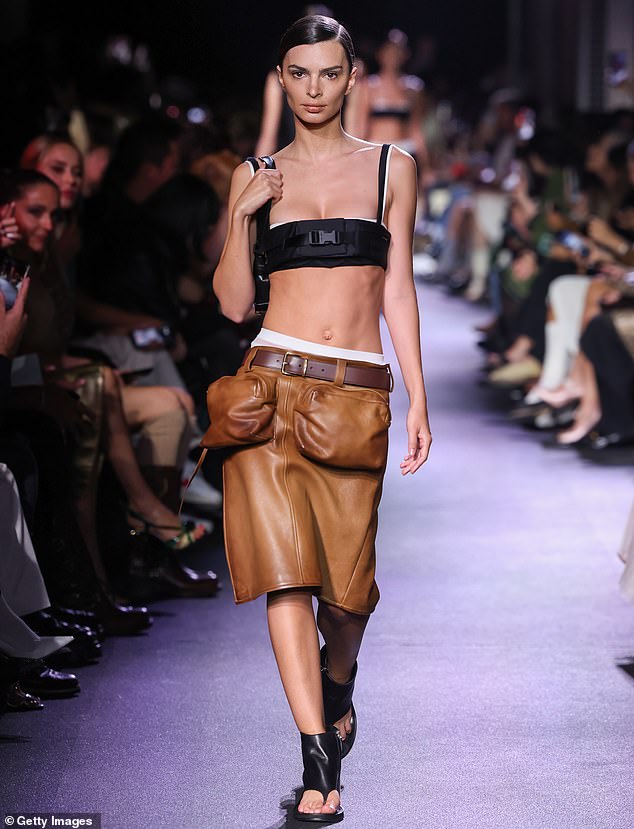 Enjoying freedom: The author further explained that she currently feels,  ‘like I’m kind of enjoying the freedom’ of being single; seen walking the runway in Paris in October

Emily appears to be taking time to enjoy her newfound freedom while raising her one-year-old son, Sylvester, whom she shares with Sebastian.

Earlier this month in October, a source commented to People about the Brad Pitt situation, explaining that the two stars were simple ‘having fun’ and were not anything serious.

‘The split was very rough for her,’ the insider stated, adding, ‘It was unexpected and devastating. It’s the perfect timing right now. There is nothing like Brad Pitt cheering you up.’

A separate source also told the publication, ‘There is an attraction, but nothing serious is going on. They have had a few dates and stay in touch when they don’t see each other.’ 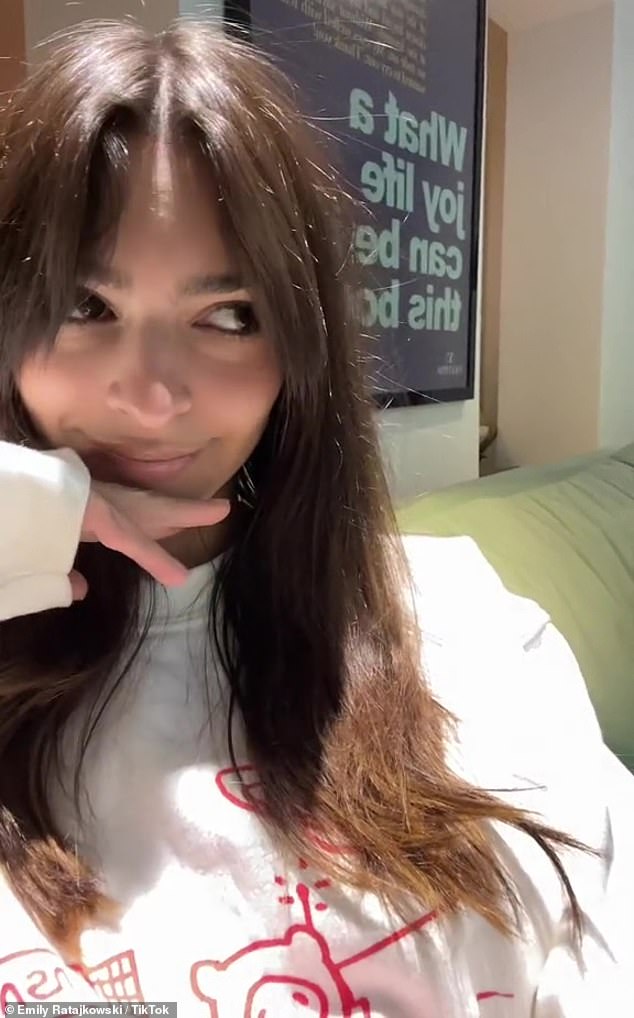 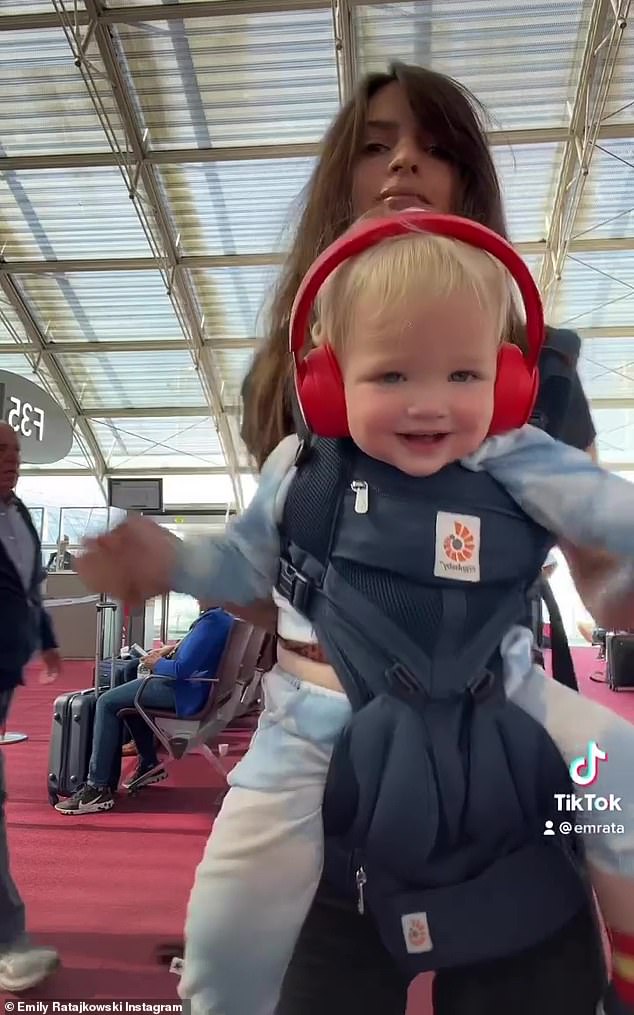 Family focus: The businesswoman expressed that she is enjoying her freedom while raising her one-year-old son, Sylvester, whom she shares with Sebastian