How tall is Emily Ratajkowski? The beauty appears on the petite side as she poses next to supermodels Shalom Harlow and Irina Shayk

Emily Ratajkowski is one of the biggest supermodels in the industry as she has landed Vogue shoots and posed for Versace.

But on Monday evening it was revealed that the beauty is actually on the more petite side when it comes to the supermodel world.

While standing next to Karlie Kloss, Shalom Harlow, Irina Shayk and Liya Kebede – as well as two other pals – Emily seemed more diminutive. 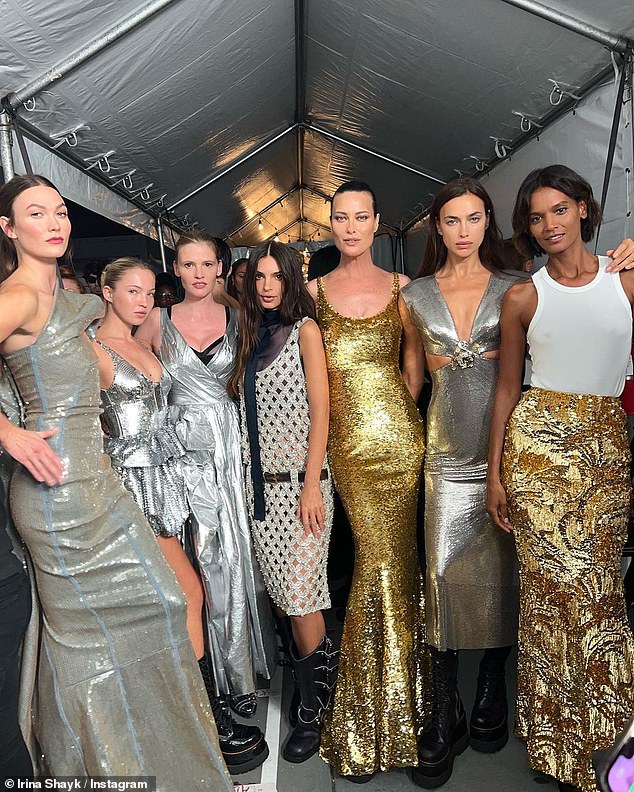 Good things come in small packages: Emily Ratajkowski is actually on the more petite side when it comes to the supermodel world. While standing next to Karlie Kloss, Shalom Harlow, Irina Shayk and Liya Kebede, she seemed smaller, but just as pretty

Single mother Emily stands at 5ft7in, which is about three inches less that the very famous models that surrounded her.

Also in the frame were two blonde beauties who wore silver dresses.

It did appear, however, that the supermodels were wearing platform boots and Emily was not, which made the contrast appear bigger than it really is. 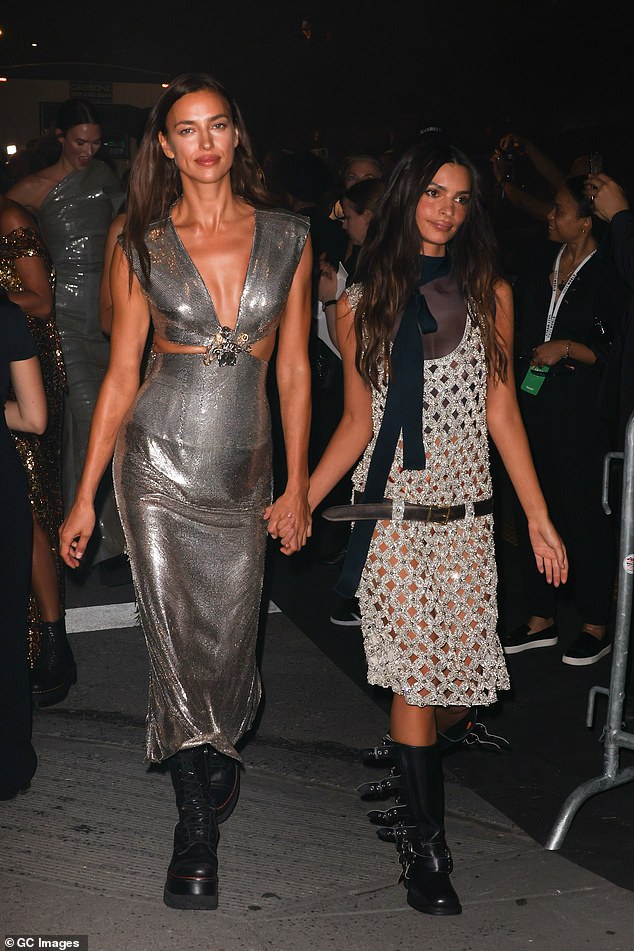 New best friends: Single mother Emily stands at 5ft7in, which is about three inches less that the very famous models that surrounded her. Bradley Cooper’s ex Irina is 5ft10in, but she did have on platform boots that made her appear even taller

The image was shared by Irina on Instagram and the event was the Vogue World show on Monday in NYC.

Emily had on a silver dress over a sheet black top with a black belt and black boots.

Shalom looked stunning and statuesque in a gold gown. Irina was gorgeous in silver, as was Kloss, and Liya modeled a sheer white top and gold skirt.

Also at the Vogue event were Bella and Gig Hadid, who are both taller than Emily at 5ft9in. 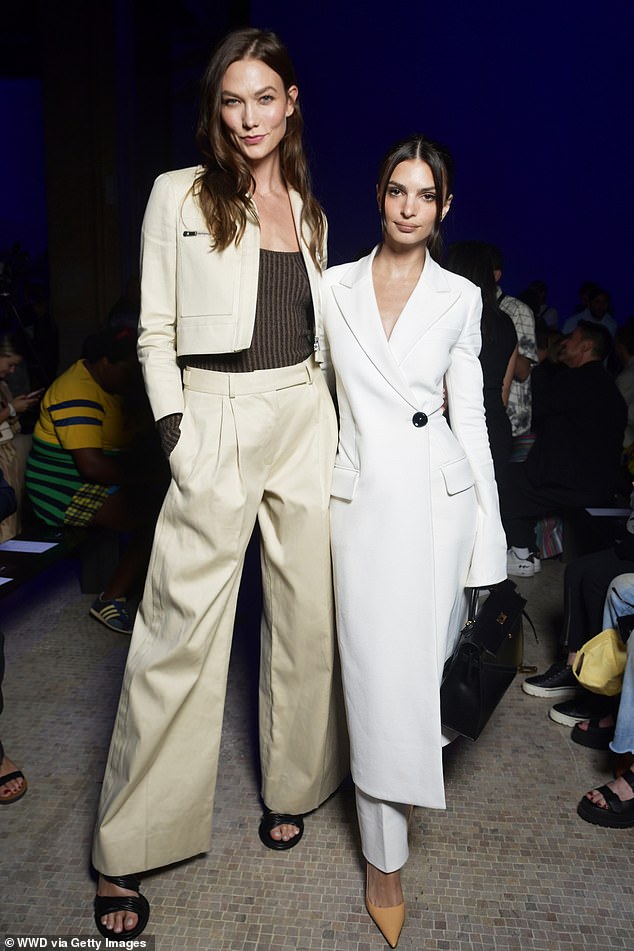 Another event: Kloss, who is 6ft2in, with Ratajkowski at the Proenza Schouler fashion show during September 2022 New York Fashion Week: The Shows at Hall des Lumieres on September 9 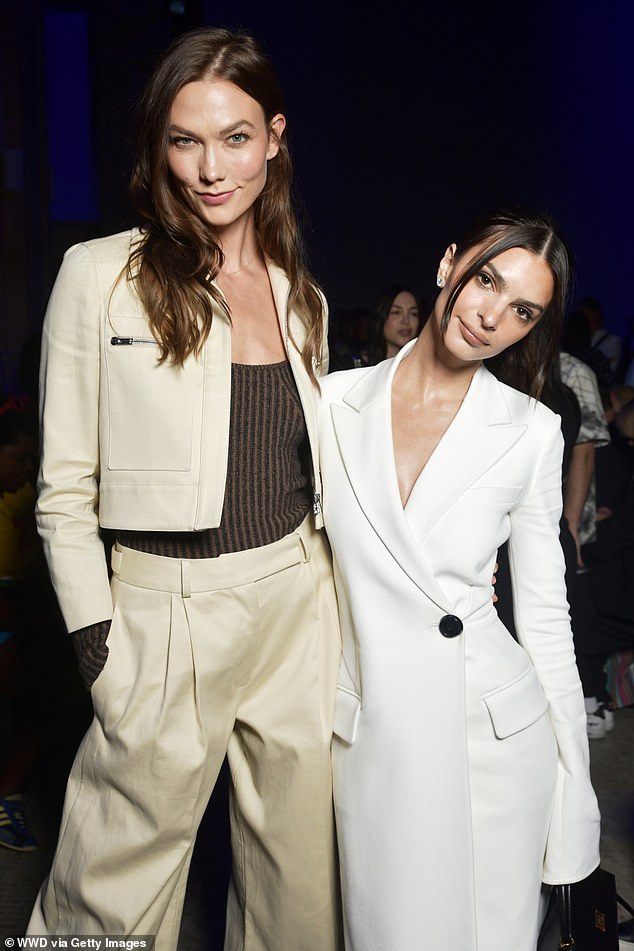 They look great together: With Kloss in beige and Ratajkowski in white, they complemented each other

This sighting comes days after Emily reportedly filed for divorce from her husband of four years, Sebastian Bear-McClard, two months after they split over allegations that he had cheated on her.

PageSix reported on Friday that the 31-year-old model filed the day before in Manhattan Supreme Court.

The outlet, which claims to have seen the documents, added that the divorce is being contested, which means there are issues to be litigated.

The couple first split in July amid accusations that 41-year-old Sebastian was a ‘serial cheater.’

The model reportedly made the decision to leave her film producer husband following the claims of his infidelity, but is said to be coping well. 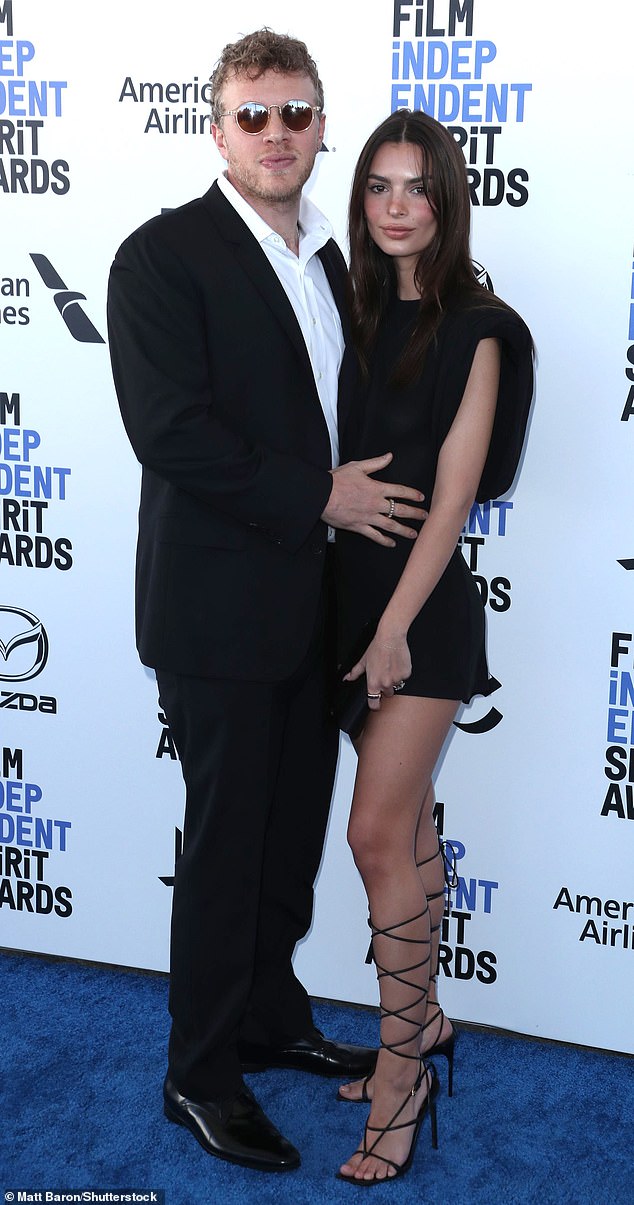 Done: Ratajkowski has reportedly filed for divorce from her husband of four years, Sebastian Bear-McClard (seen in 2020), two months after they split over allegations that he had cheated 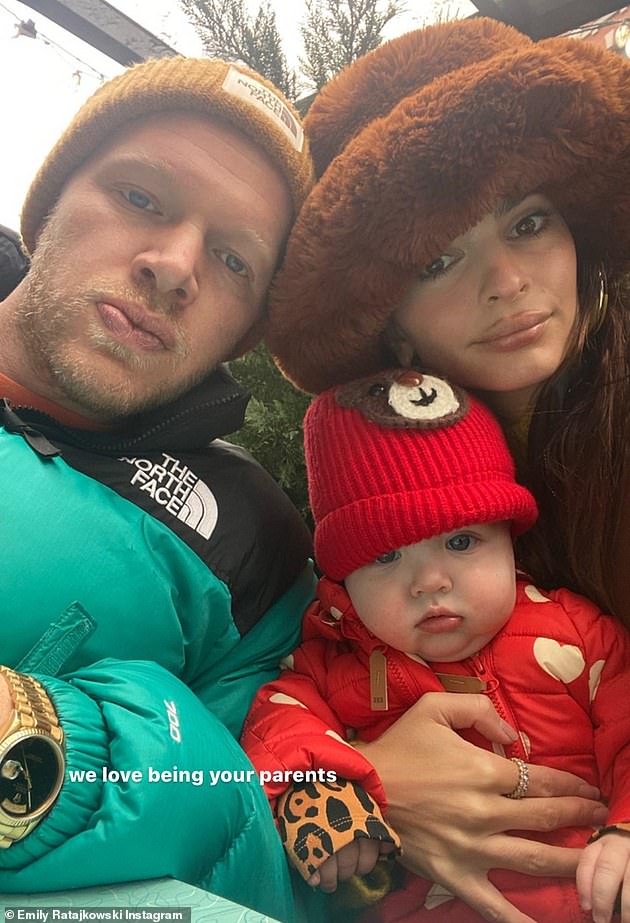 The outlet, which claims to have seen the documents, added that the divorce is being contested, which means there are issues to be litigated. They are seen with their son in March

A source close to the star first confirmed the shocking split to People magazine in July, explaining that Emily is focused on parenting the couple’s son Sylvester, 16 months.

‘They split recently. It was Em’s decision. She is doing OK,’ the insider revealed. ‘She is strong and focused on her son. She loves being a mom.’ 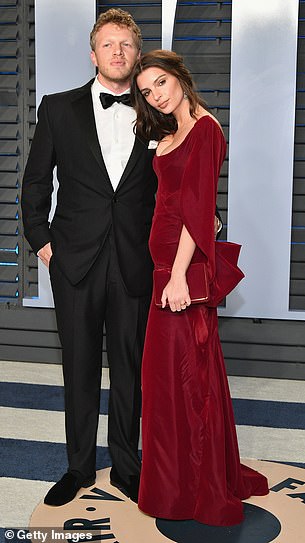 Emily and Sebastian were first linked on Valentine’s Day in February 2018. At the time, the pair was spotted packing on the PDA in Los Angeles, California. They are seen in March 2018

The news came just days after someone close to the pair told Page Six that Sebastian was a ‘serial cheater,’ with the insider stating: ‘It’s gross. He’s a dog.’

Comedian and social media influencer Claudia Oshry also spoke out about the situation during an episode of The Morning Toast podcast at the time, in which she claimed Sebastian’s infidelity was an open secret in the industry.

‘It’s, like, known that her husband has cheated on her and they’re filing for divorce,’ she said, adding that when the couple officially confirms their separation, it will not come as a surprise to anyone.

Neither Emily nor Sebastian have made any public comments in regards to the status of their marriage as of yet. DailyMail.com has contacted representatives for them both for comment.

Emily and Sebastian were last spotted together in mid-June while on vacation in Italy, and appeared in good spirits as they relaxed on Porto Ercole beach together.

The couple was also among the many celebrity guests at Ari Emanuel’s wedding to Sarah Staudinger in St. Tropez in late May.

She first sparked breakup rumors in July, when she was seen going for a stroll in New York with the couple’s son, and was not wearing her wedding ring.

The model was pictured moving her stuff out of the New York City apartment that she previously shared with Sebastian last month.