Comedian Joel, 36, shared a selfie with the Inbetweeners star, 31, as the presenting duo filmed together in a behind-the-scenes selfie.

The actress, who is yet to comment on the rumoured romance, is back in the UK following a brief trip to Paris with her mum and sister. 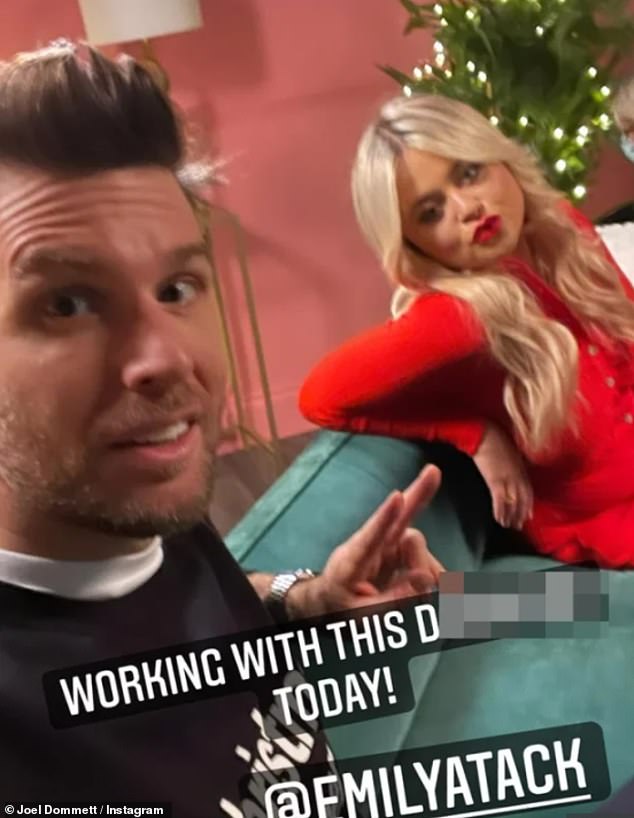 Joel wrote on his Instagram story:  ‘Working with this d***head today! @emilyatack’

Sasha Attwood, girlfriend of the Man City footballer, is ‘devastated’ over allegations that the England player has been secretly dating Emily for six weeks.

The footballer’s childhood sweetheart, 25, allegedly only found out about Jack’s meetings with Emily after England’s 5-0 World Cup win against Albania on Friday.

It is understood social media influencer Sasha had been cheering Jack, 26, on during the game with Jordan Pickford’s wife Megan Davison before hearing the news. 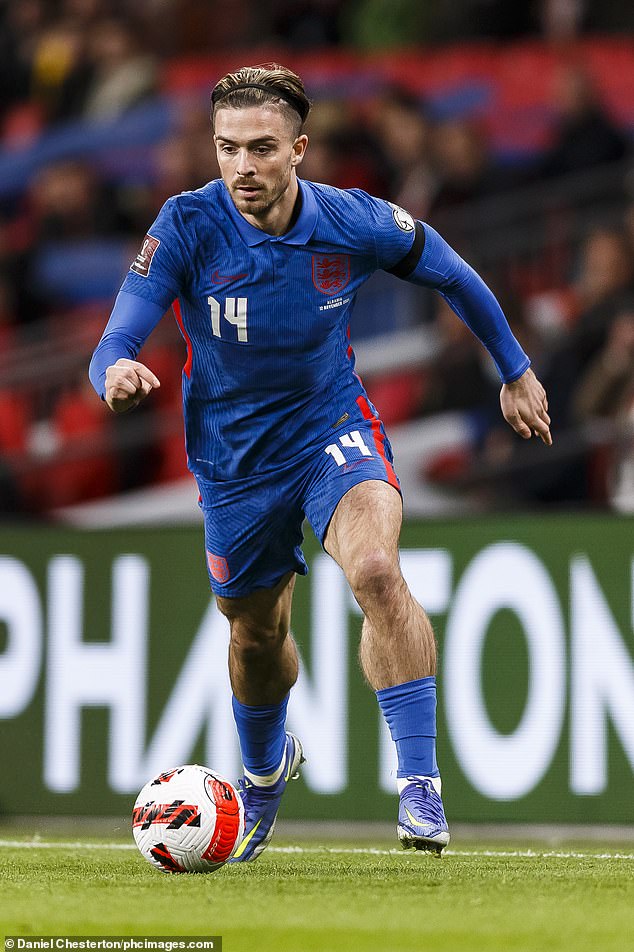 Silent: The actress is yet to comment on the romance with the Man City footballer (pictured on Friday) 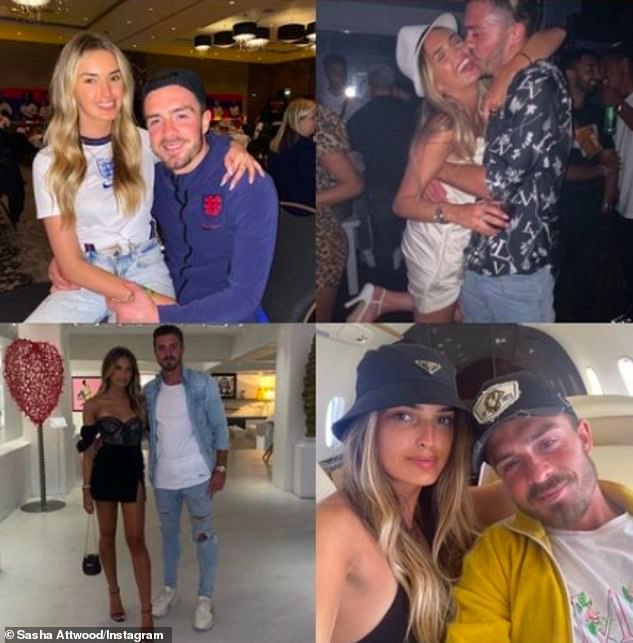 Heartbroken: Sasha Attwood, girlfriend of the Man City footballer, is ‘devastated’ over allegations that the England player has been secretly dating Emily for six weeks.

Jack now seemingly finds himself with a big decision to make – whether to dump Sasha, his girlfriend of ten years, for Emily after becoming ‘besotted’ with her.

The Mail On Sunday revealed this weekend that Emily has grown fond of England’s first £100 million footballer, but thought he was single when she was introduced to him by another England player some weeks ago.

Emily, who has been on a number of secret dates with the sportsman told friends that she had also seen him on the celebrity dating app Raya and presumed he was no longer in a relationship with Sasha.

One told The Mail on Sunday: ‘Jack is besotted with Emily… she really likes him too – otherwise, of course, she wouldn’t have met up with him.’ 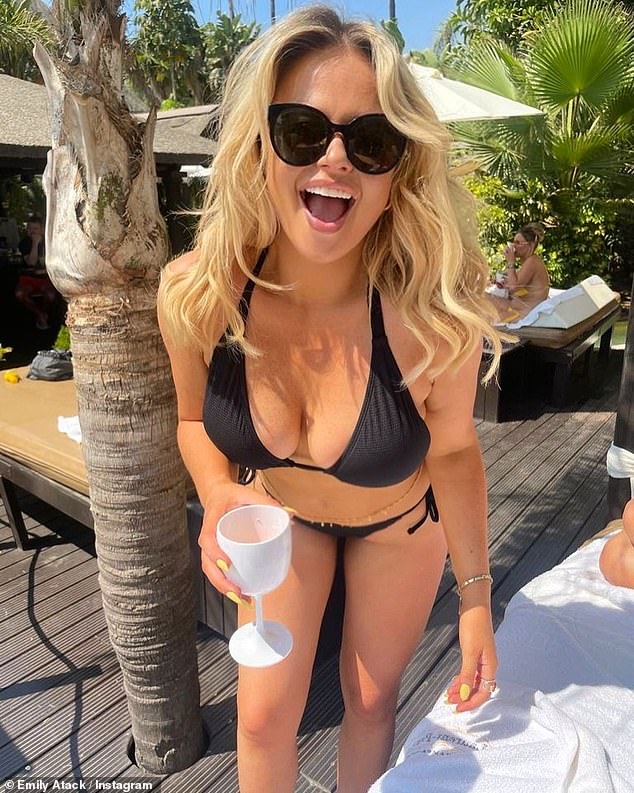 Ouch: The footballer’s childhood sweatheart, 25, allegedly only found out about Jack’s meetings with Emily after England’s 5-0 World Cup win against Albania on Friday (pictured in October)

They continued: ‘She did also think he was single – it is what you expect if you see someone on a site looking for a girlfriend.

‘Emily has really enjoyed his company recently, but she certainly isn’t going to hang around if he stays with his girlfriend.

‘She will happily get on with her life if that’s what he wants to do. It’s up to him now.’

MailOnline has contacted Jack and Emily’s representatives for comment. 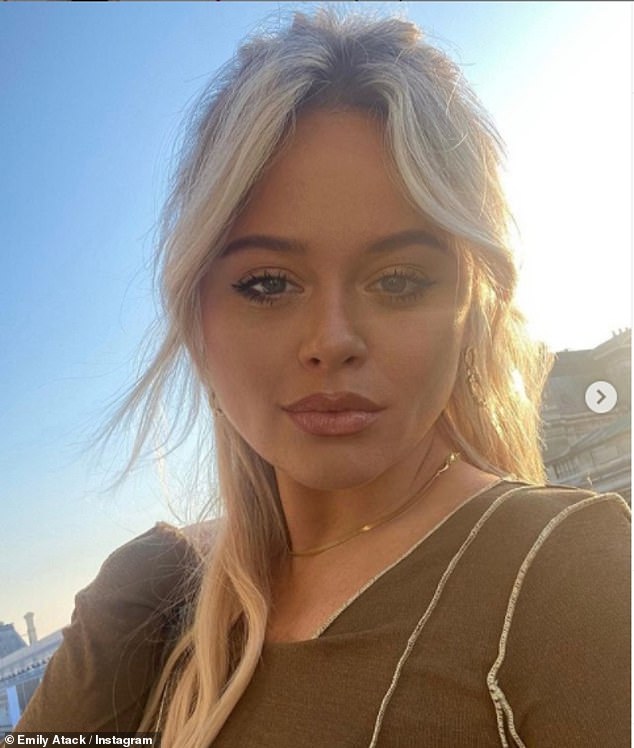 Getaway: Emily is back in the UK following a brief trip to Paris with her mum and sister

On Friday, while Jack was out of the limelight in the England team’s bubble at The Grove Hotel in Hertfordshire, Sasha was said to be ‘devastated’ after learning he had met Emily both at her North London home and at Manchester’s five-star Lowry Hotel.

Sasha had been cheering Jack on in his match against Albania with Pickford’s wife and had enjoyed a ‘festive girlie day’ earlier on Friday at London’s Corinthia Hotel.

The pair posted images on Instagram of themselves eating brunch, drinking hot chocolate and enjoying the spa facilities.

However, Sasha appeared to be in hiding after failing to return to the Corinthia with Megan, the paper reported. 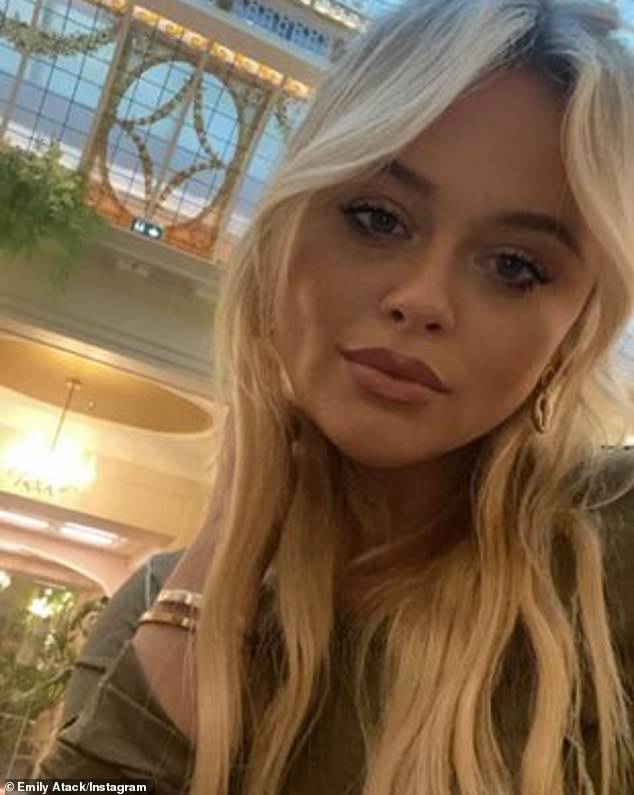 Confusion: Emily, who has been on a number of secret dates with the sportsman told friends that she presumed he was no longer in a relationship with Sasha

Sasha, who attended St Peter’s Roman Catholic secondary school in Solihull with Jack, is very close to the footballer’s family – especially his 18-year-old sister Hollie, who has cerebral palsy.

She also joined Jack’s mother Karen when he signed his record-breaking contract with Manchester City at the Etihad Stadium in August.

Meanwhile, Emily– who was in Paris when the story broke – smiled yesterday as she took her dog, a King Charles cavalier named Penny, for a walk near her home.

When appearing on I’m A Celebrity alongside Harry Redknapp, who went on to win, she asked him if his son, footballer-turned-pundit Jamie, would go out with her after the show. 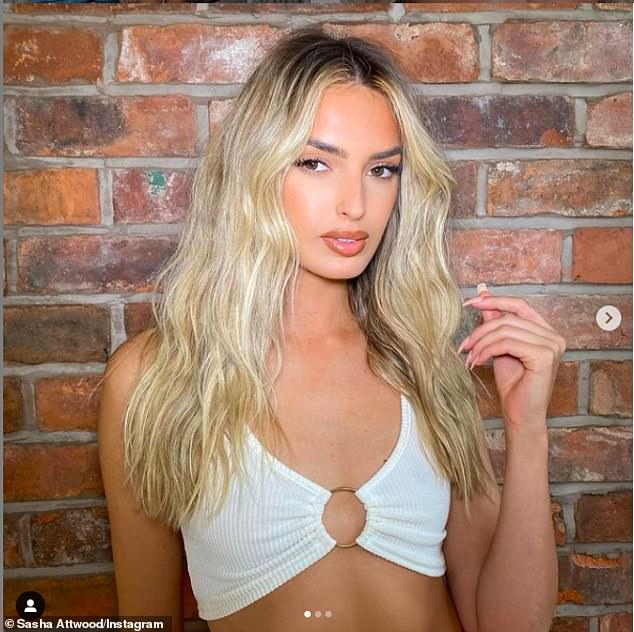 A friend of Emily’s told The Sun of her communications with the England player: ‘Emily watched Jack in the Euros and thought he was fit.

‘And for his part, Jack has been a fan of hers since she starred as Charlotte ‘Big Jugs’ Hinchcliffe in The Inbetweeners.

‘They started DMing on Instagram before swapping numbers, and taking it on to WhatsApp and FaceTime. Jack’s been calling her almost every day and has been pretty open about it.

‘They’ve become really good mates, are FaceTiming loads and he’s like a little puppy dog around her. It’s very sweet. They have a real laugh together.’ 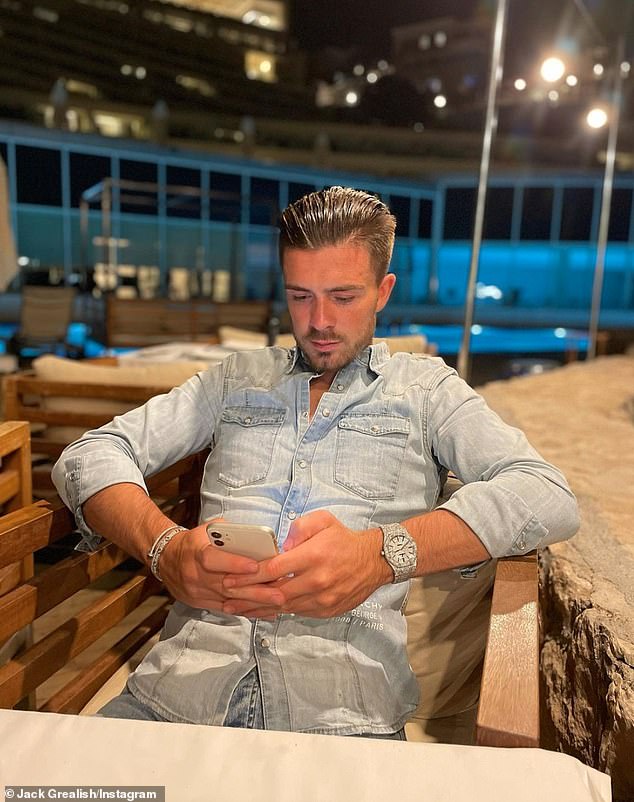 Hanging out: Jack and Emily are believed to have got together at a Manchester hotel and at Emily’s London pad in recent weeks

Since swapping numbers in September, Jack and Emily are said to have hung out at the Lowry hotel in Manchester ahead of City’s win against Brugge.

Emily was visiting nearby Salford at the time while touring the country with her comedy show, Emily Atack Has Left The Group.

A source told the publication that their friendship is ‘the talk of the dressing room’ because many of Jack’s teammates fancy Emily.

The insider isisted that the friends ‘haven’t crossed a line’ and have only been hanging out as pals so far. MailOnline have contacted reps for Jack and Emily. 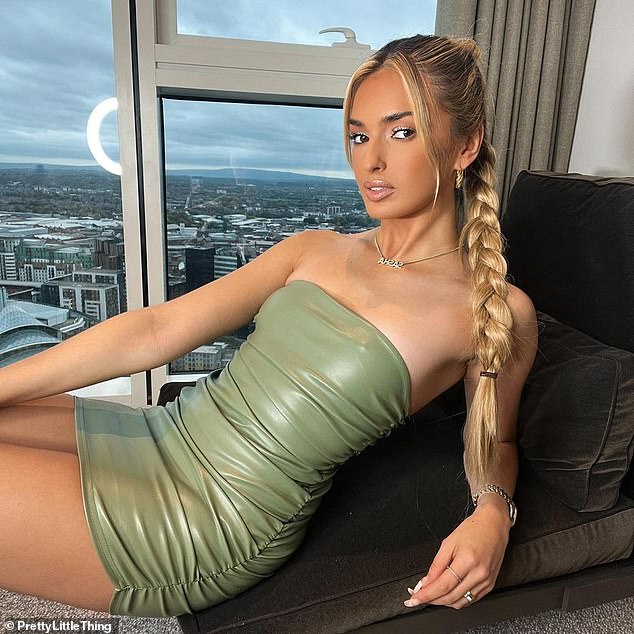 Betrayal? The insider isisted that the friends ‘haven’t crossed a line’ and have only been hanging out as pals behind Sasha’s back so far

In the same month, Sasha confirmed she and Jack were still an item as she posted a sweet birthday tribute to the Man City footballer.

The blonde beauty took to her Instagram to share a series of cute pictures of them together, writing in the caption: ‘Happy Birthday my babe, loving you always.’

In the montage the model sat on her childhood sweetheart’s lap wearing an England shirt, cuddled up to him at a party and on a private plane and posed before a night out. 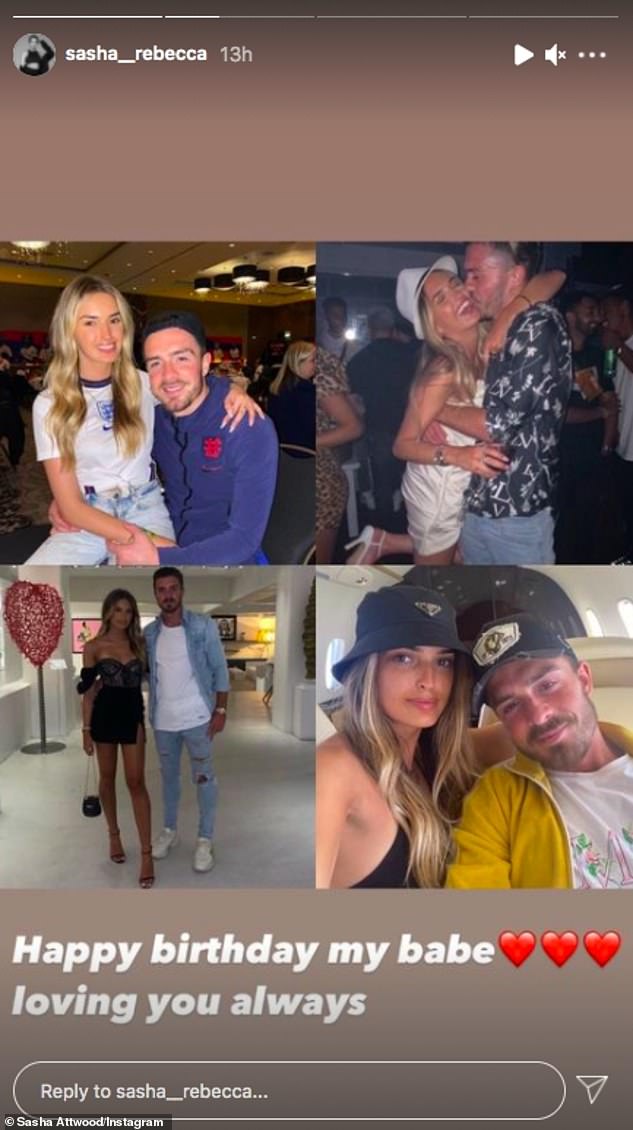 Cute: In September Sasha confirmed she and Jack were still an item as she posted a sweet birthday tribute to the Man City footballer 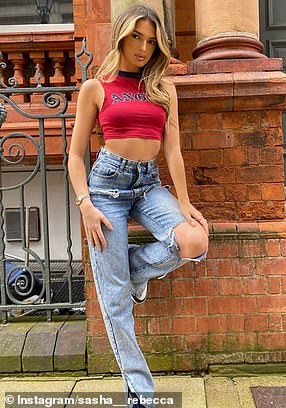 Glamorous: Sasha Attwood, 25, is a model from the West Midlands

Sasha Attwood, 25, is a model from the West Midlands.

She has known Jack since their school days and the pair are said to have rekindled their romance in June.

Sasha is represented by Industry with her modelling jobs, where she has a profile that lists her details.

According to The Sun she was scouted at age 13 in Birmingham while out shopping, and has modelled for brands such as Boohoo.

As well as modelling, Attwood is a successful Instagram influencer with over 50,000 followers, often sharing fashion and beauty posts. She also has a YouTube channel.

She does not share any insight into her relationship with Jack online.

The couple recently jetted off on holiday together to Croatia after the Euros.

Though Sasha and Jack had initially managed to keep their relationship under-wraps, rumours began to circulate about a possible romance after she was spotted supporting him during England’s Euro 2020 games at Wembley.

Jack has reportedly been keen to keep Sasha out of the spotlight.

But a source recently described Sasha as Jack’s ‘secret weapon off the pitch’ and that she ‘keeps him grounded’. 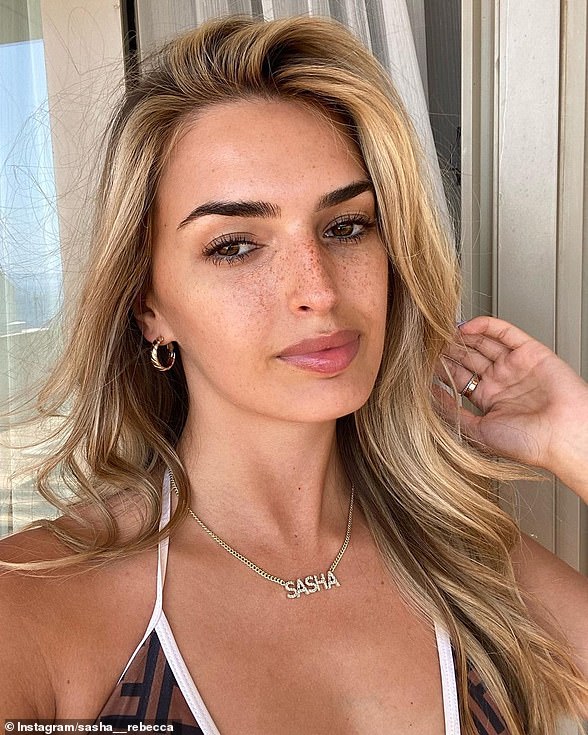 Stunning: As well as modelling, Attwood is a successful Instagram influencer with over 50,000 followers, often sharing fashion and beauty posts