Prince Charles wrote a dramatic and deeply personal article for the Mail on Saturday, calling on big businesses to join his crusade for action in the fight against climate change ‘before it’s finally too late’.

His younger brother Prince Andrew doesn’t appear to have got the message. I can disclose that the Queen’s second son took not one, not two, but three SUV vehicles to Scotland for his holiday at Balmoral.

The three ‘Chelsea tractors’ travelled in convoy for the 1,020-mile round-trip from Royal Lodge, Windsor, to Deeside, returning last Friday after a ten-day stay. 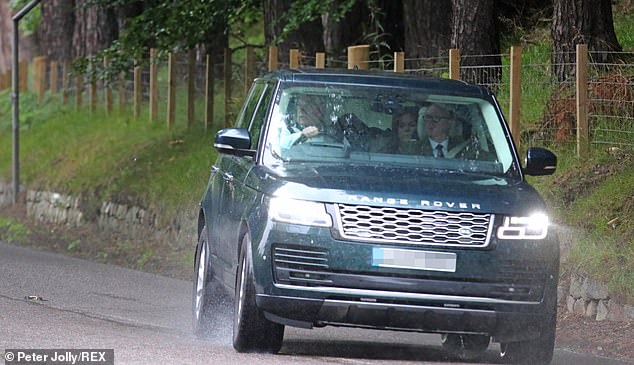 The gas-guzzling convoy: I can disclose that Prince Andrew took not one, not two, but three SUV vehicles to Scotland for his holiday at Balmoral. Pictured: Prince Andrew at the wheel of one 4×4

‘It doesn’t seem very eco-friendly,’ admits a friend of the beleaguered Duke of York. ‘It’s not clear why he needed three cars.’

It’s understood that Andrew still receives taxpayer-funded police protection even though he ‘stepped back’ from public engagements in November 2019 because of the furore over his ill-judged friendship with convicted sex offender Jeffrey Epstein.

He was due to have his armed police cover downgraded to officers carrying just Tasers, but was reportedly allowed to keep his protection team, which carries firearms, after he complained to the Queen. 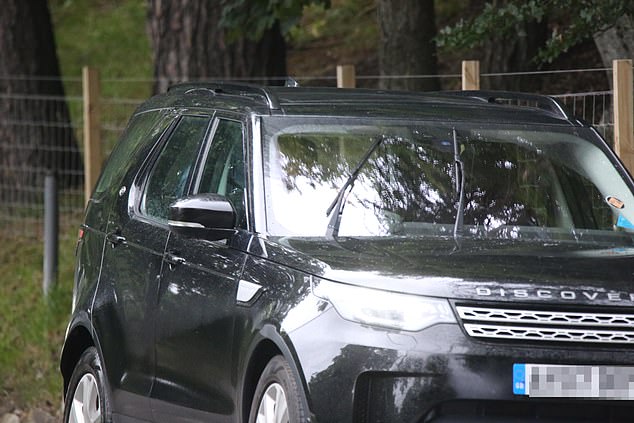 The three ‘Chelsea tractors’ travelled in convoy for the 1,020-mile round-trip from Royal Lodge, Windsor, to Deeside, returning last Friday after a ten-day stay 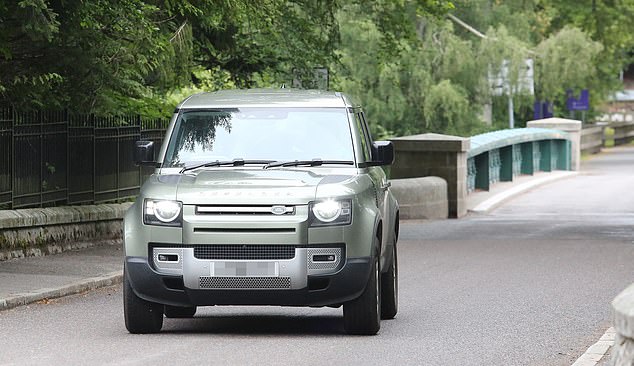 One of the vehicles was a pristine new petrol-powered Land Rover Defender, (pictured) which costs more than £53,000. The other two were his Land Rover Discovery (£51,185) and his Range Rover petrol-electric hybrid (£115,000).

However, this was a private visit and all three cars belonged to Andrew, carrying his personalised number plates. One of the vehicles was a pristine new petrol-powered Land Rover Defender, which costs more than £53,000.

Andrew travelled in the same car as his ex-wife, Sarah, Duchess of York. As revealed in this column, Fergie stayed at Balmoral for the whole of Andrew’s visit for the first time since their divorce. She previously had to leave before the arrival of Prince Philip.

Strictly host Tess Daly is so worried about her daughter going to Reading Festival this weekend that she’s sending her TV presenter husband Vernon Kay, as a chaperone. 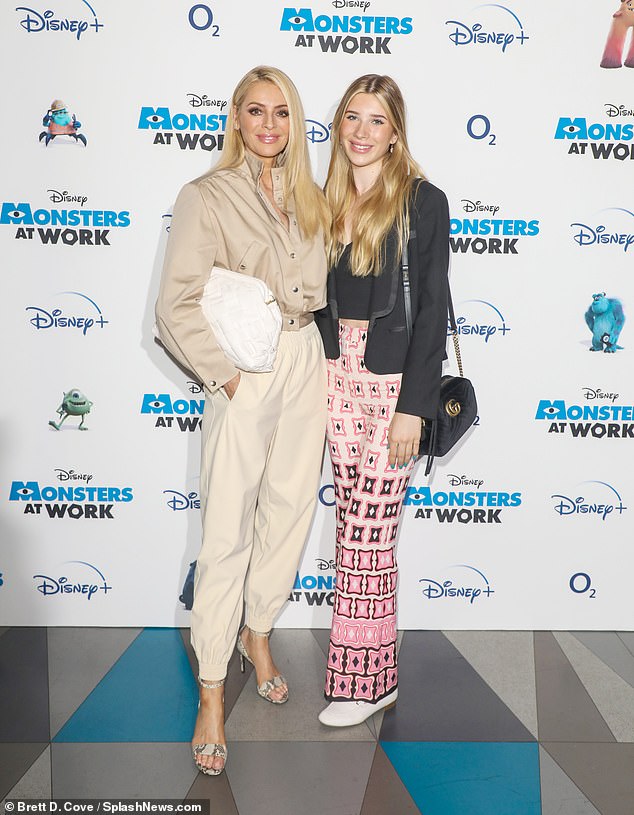 Tess Daly (pictured with her eldest daughter Phoebe, 16, in July 2021) is sending her TV presenter husband Vernon Kay, as a chaperone with her daughter to Reading Festival

‘Phoebe is 16 and her first festival will be Reading,’ Kay explains. ‘It was my first festival, too, and everything that goes on at a festival went on — and it was quite daunting. So I’m going with her.

‘She said: “You can’t follow me around, you’ve got to leave me alone.” I said: “Don’t worry, I will park myself somewhere in front of a stage but if you need me, I’m there.”’

But who will be keeping an eye on Kay?

Billy Connolly, who received a lifetime achievement award at the Edinburgh TV Festival this week, declares: ‘I’m happy to tell people I wear underwear under my kilt. I’ve got very sensitive skin. The kilt eats me alive. It makes my willy go purple.’

Too much information, perhaps, from the Big Yin.

Heidi hi jinks for James at stag do

He won two Olympic gold medals for Team GB, but rowing star James Cracknell appeared to be flying the flag for Switzerland on his stag do.

The 49-year-old, who is to marry American financier Jordan Connell, 35, slipped into a Heidi costume, complete with blonde wig and pigtails, for his night out with male friends. 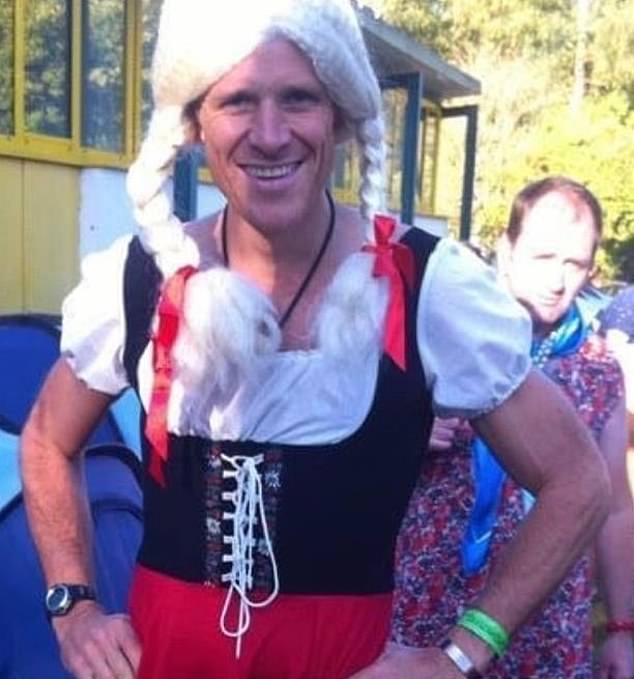 Rowing star James Cracknell, 49, slipped into a Heidi costume, complete with blonde wig and pigtails, for his stag do night out with male friends

Worried his high jinks might hinder his performance in a half marathon the following day, the former Strictly star joked: ‘My running legs seem to be Missing In Action after my stag. Luckily, the outfit is MIA as well.’

Cracknell met Jordan while they were studying at Cambridge in 2018. She will be his second wife following his 16-year marriage to TV host Beverley Turner, the mother of his three children.

For Jordan’s hen do she had friends carry heart-shaped balloons featuring James’s face.

‘Piscator Non Solum Piscatur’, the Teenage Kicks singer declares in response to the news that Bob Mortimer and Paul Whitehouse’s genial Gone Fishing series, in which Sharkey made a guest riverside appearance, is returning to BBC Two.

The Flyfishers’ Club motto roughly translates as ‘there is more to fishing than catching fish’. True, but it certainly helps . . .

Oh, BABY! Nat’s in the money 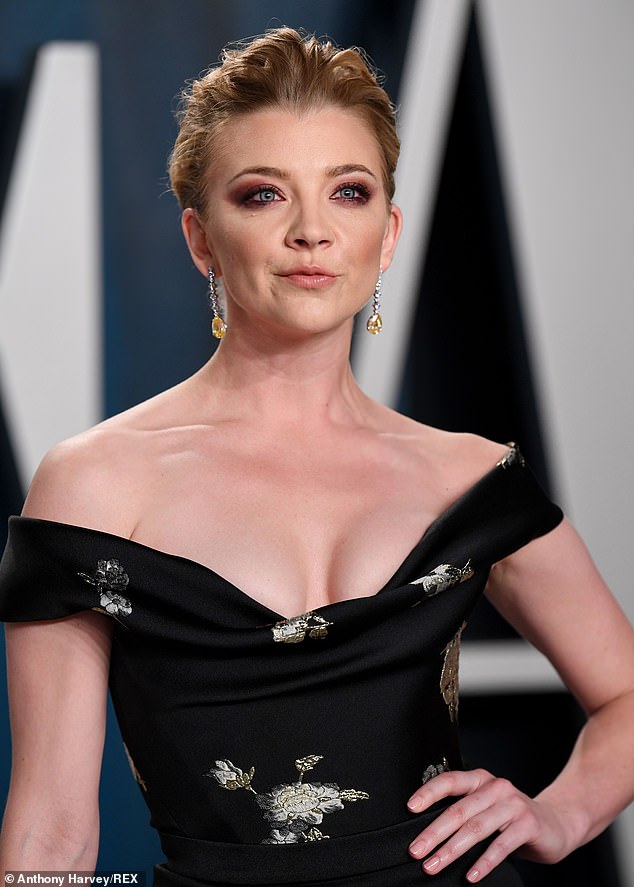 Natalie Dormer, 39, who played queen Margaery Tyrell in sex-and-dragons drama Game Of Thrones, joked recently about the birth of her first child — a girl: ‘There’s going to be lots of Covid babies, because what else can you do?’

But she’s also found time to make plenty of money. I can disclose that Dormer has seen her assets top £1 million.

They rose by more than £300,000 to £1.12 million in 2020, according to newly released documents for Pangur Ltd, the business she uses to channel her earnings.

TV academic Lucy Worsley throws herself into presenting with such gusto that she regularly dresses up in historical costumes, but she can apparently be over-enthusiastic behind the wheel, too.

I hear the Tudor expert’s car got stuck in a trench while she was on holiday in Northumberland.

She was visiting a Victorian mansion, Cragside, run by the National Trust.

Worsley thanks a member of staff, saying: ‘Above and beyond the call of duty from house steward Alex, who towed our car out of a ditch.’

The author declines to say how the vehicle got stuck in the first place!