She is set to appear in the upcoming series of Dancing In Ice in 2021.

And Denise Van Outen set pulses racing as she donned an ice skating-themed outfit that consisted of a shimmering bodysuit and skating boots, for a photoshoot on Friday.

The TV personality, 46, confirmed she is ‘getting in the ice zone’ as she prepares to make her grand entrance on the show which returns to ITV in January. 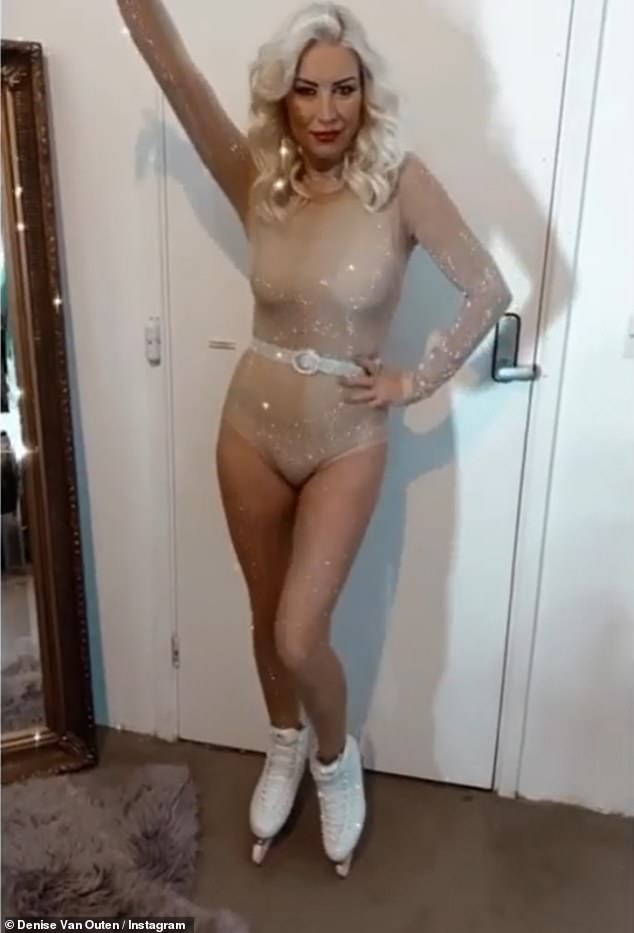 Set pulses racing: Denise Van Outen set pulses racing in a slinky shimmering bodysuit on Friday as she prepares to make her Dancing On Ice debut in January 2021

Denise cinched her nude one-piece in at the waist with a white belt, accentuating her sensational curves.

She also sported white ice skating boots and tights as she struck a pose for the sizzling Instagram post.

The actress styled her blonde tresses in a glamorous wave and rocked a red lipstick.

Despite getting into the ice skating spirit, Denise has insisted she won’t be trying any death-defying moves on the show. 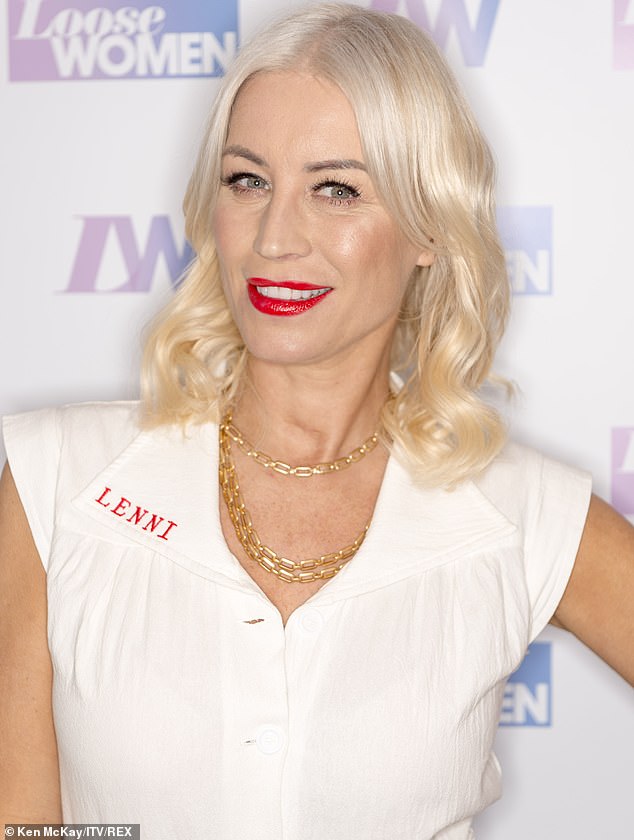 Staying safe? The TV personality, 46, confirmed she is ‘getting in the ice zone’ as she prepares to make her grand entrance on the ITV show but insists she won’t try any death-defying moves

Speaking to The Sunday Mirror’s Notebook Magazine, Denise cited her daughter Betsy, eight, as the reason she wouldn’t be taking too many risks on the ice.

She said: ‘I won’t take any risks on the ice for my daughter’s sake.’

One of the show’s most nail biting moves is the headbanger, where a skater is swung around with their head being raised and lowered, often dangerously close to the ice.

Donna Air previously told how she had been banned from attempting the move when she took part in the 2018 series as bosses told her she was ‘too tall’.

Denise shares her daughter Betsy with her ex-husband Lee Mead, who she was married to from 2009 to 2013.

The star is partnered with pro skater Matt Evers on the upcoming series and will be competing against the likes of Myleene Klass and Rebekah Vardy. 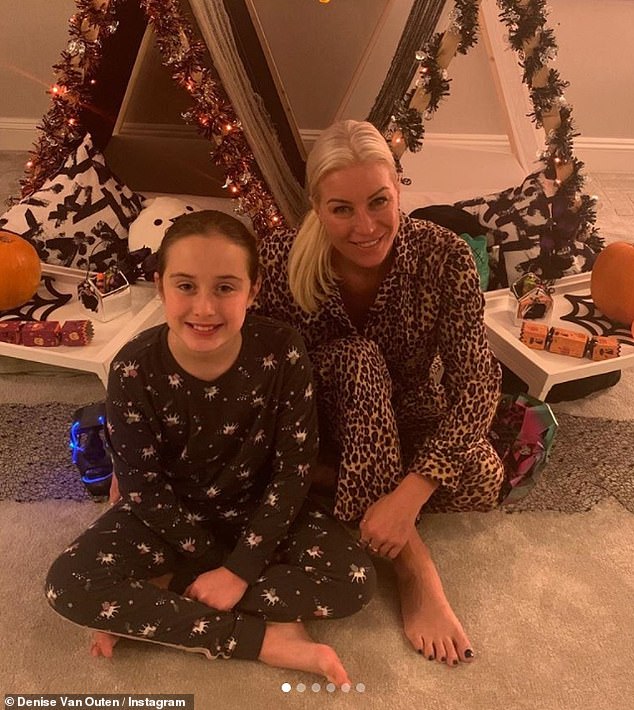 Family: Speaking to The Sunday Mirror’s Notebook Magazine, Denise cited her daughter Betsy, eight, as the reason she wouldn’t be taking too many risks on the ice

It comes after reports that Dancing On Ice was going to be ‘hit in a big way’ during the second lockdown due to some of the rinks being closed to adhere to new coronavirus guidelines.

The pro skaters and celebrities were said to be concerned that they’ll be unable to train as they don’t live near the select few open venues.

The new rules will also see all leisure centres and sporting venues shut until at least Wednesday 2 December.

A source told The Sun: ‘Lockdown is affecting many industries, but Dancing On Ice looks set to be hit in a big way.

‘The main concern from some of the professionals is that because council rinks are being closed down, they’re going to be left with nowhere to train. 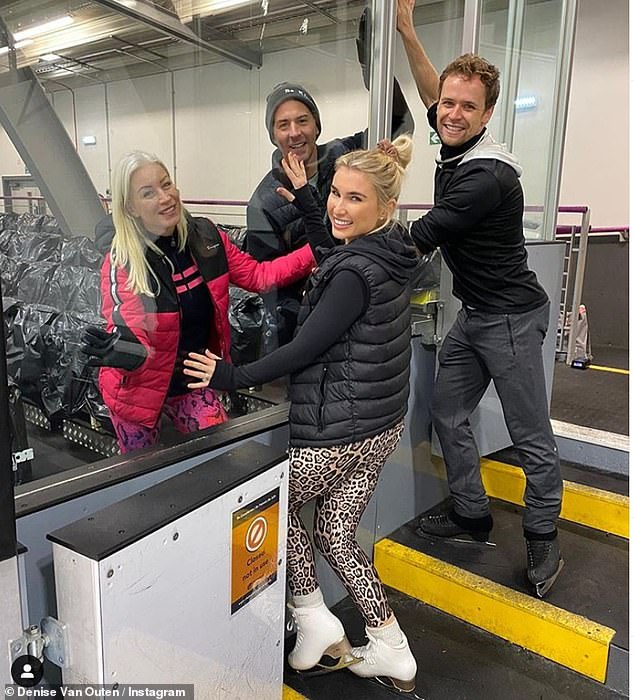 Pals: Denise is partnered with pro skater Matt Evers (far left) on the upcoming series and will be competing against the likes of Billie Faiers (pictured)

‘Not all of them are near one of the few available UK rinks so it remains to be seen how they’ll get on-ice training.’

Yet a Dancing On Ice spokesperson hit back at the claims and told MailOnline: ‘We’re in constant contact with our entire cast in training and there have been no concerns raised.

‘All scheduled training is proceeding safely within guidelines and at easily accessible locations.’

They added: ‘ITV takes the safety and welfare of everyone involved with its programmes extremely seriously and follows all government guidelines regarding Covid-19.

‘The government has confirmed that TV production can carry on throughout lockdown, to that end we will be hiring the local ice rinks on a private and exclusive hire basis.’

So far, the cast have been undergoing weekly coronavirus tests in order to train with their professional partners on the ice.

Dancing On Ice 2021: Who are the celebrities?

Myleene says: ‘My girls have always wanted me to do this but I’ve always been too scared someone will skate over my fingers!’

Jason says: ‘To be able to learn a skill and spend some time focused is quite exciting, and I’m looking forward to seeing you guys.’

Profession: Actress best known for her role as Kate Connor in Coronation Street

Faye says: ‘I’m so excited! The producers get to know you and this is the first time I think people are just going to see me, not being a character… Just being me – Faye!’

Profession: Former sprint and hurdling athlete, who has since carved out a career as a TV personality

Colin says: ‘You go out there, you enjoy yourself and you learn a new skill and to hone the skill of skating will just be a huge, huge plus. I’m looking forward to it.’

Rebekah says: ‘I’m really looking forward to getting my teeth into that. I’m going to give my 100% effort for it all.’

Rufus says: ‘I’m doing it for the money. I don’t know if you’ve heard but about six months ago this global pandemic hit and made just about everything I’ve ever done to earn a pound note disappear!’

Profession: Performer and presenter, best known for The Big Breakfast

Denise says: ‘I’m really excited. Finally, I get to tell people. I’ve kept this a secret from most of my friends and family. Betsy [her daughter] doesn’t even know….’

Profession: Actor best known for his role as Jacob Gallagher in Emmerdale

Joe-Warren says: ‘I’m super excited. I’m glad I have the time off Emmerdale to really focus on training…’

Profession: Former Olympic skier, who is also a TV presenter, adventurer and journalist

Graham says: ‘Ice doesn’t scare me, it’s the dancing… [My experience was confined to] ‘dancing on tables, wearing ski boots in après ski. It’s not graceful and elegant!’

Lady says: ‘I’m petrified, (but) I’ve always wanted to ice skate so what’s better than doing it in front of millions of people.’

Billie says: ‘I am soooo excited to announce that I will be taking part. I still can’t believe I am actually doing it!!’