She’s no stranger to setting pulses racing with her sizzling social media snaps.

And Demi Rose, 26, did just that on Saturday as she left almost nothing to the imagination and posed in just a towel while on holiday in Ibiza.

In one sultry shot, the influencer could be seen covering her assets with her arm as she gave a salute, while a white towel rested on her lap. 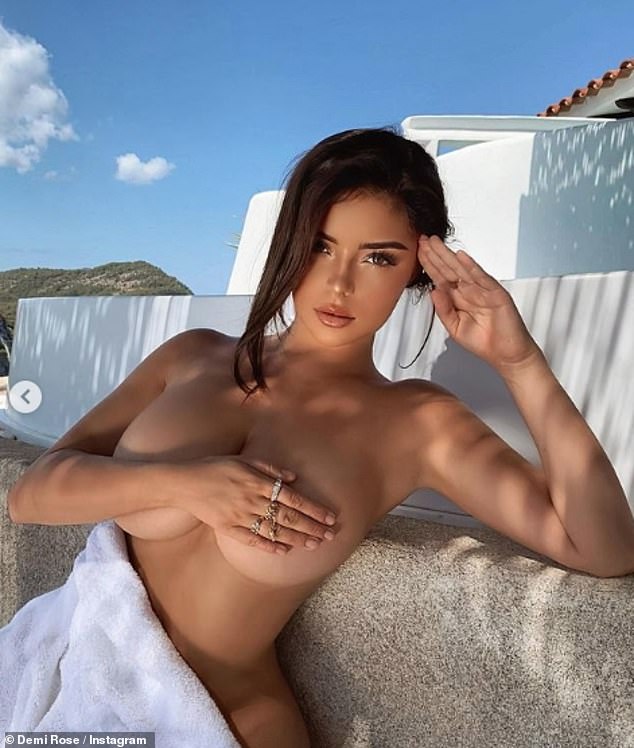 Sizzling: Demi Rose, 26, set pulses racing on Saturday as she made the most of her ample assets and posed in just a towel while on holiday in Ibiza, sharing the snaps on Instagram

Her towel rested just below to protect her modesty and she showed off her flawless skin as she caught the golden glow of the sunlight.

Her brunette hair was clipped up behind her hair with some loose strands hanging down.

In another picture, she could be seen wrapped in the towel as she looked relaxed, closing her eyes. 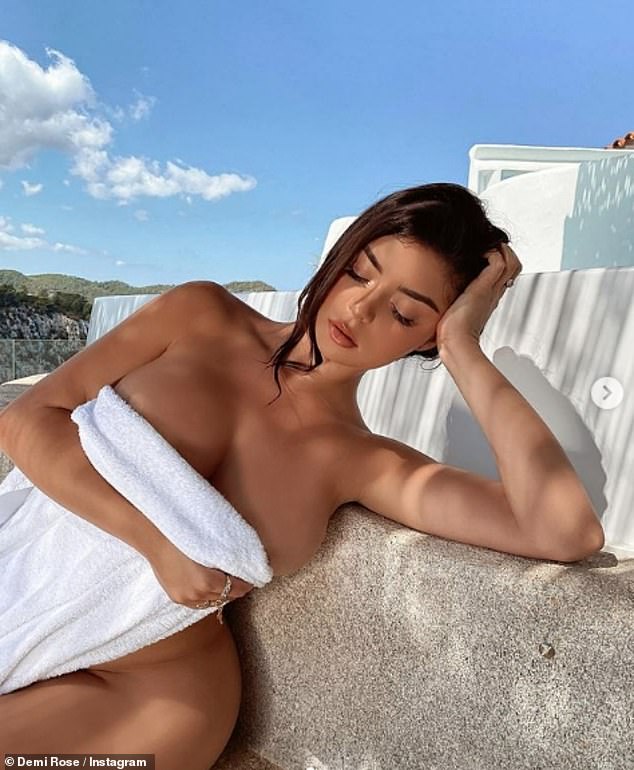 Rest and relaxation: In another picture, she could be seen wrapped in the towel as she looked relaxed, closing her eyes

The internet star sent temperatures soaring as she showed off her jaw-dropping curves in a striped orange Jean Paul Gaultier dress with a revealing thigh-high split on Thursday.

Sitting with a glass of orange juice in hand, Demi seductively gazed at the camera while showing off her tanned legs in the revealing dress. 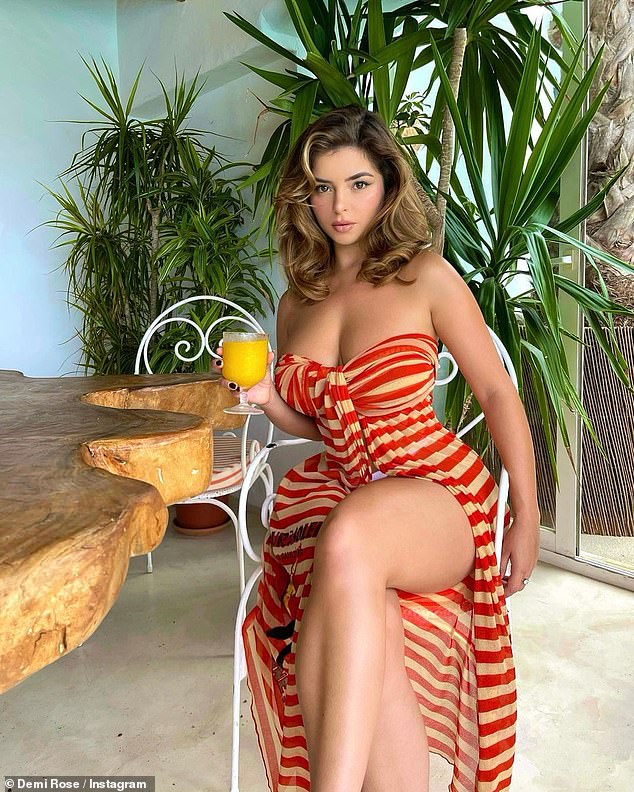 She’s on fire! Demi also posed for a sultry Instagram snap on Thursday, putting on a very leggy display in the new shot

Her highlighted hair was styled into a bouncy blow dry with her loose curls gently resting on her shoulders.

Demi could be seen setting next to a large rustic table as she wound down after a busy day of sunning herself on her holiday.

In another image, Demi could be seen standing to show the print on her gown, which featured a naked figure with its arms and legs outstretched with a sun in the background. 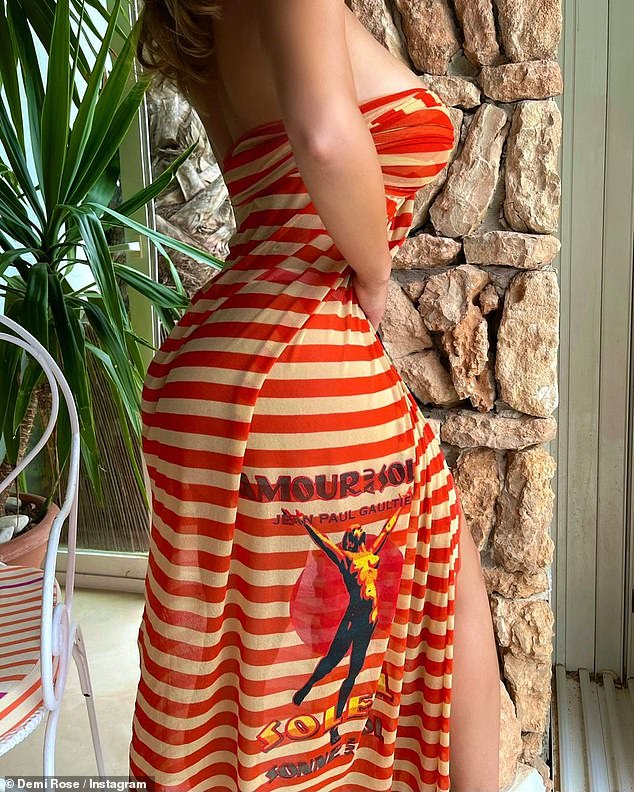 Fashion forward: The influencer posed up a storm on the Spanish island of Ibiza in a striped orange Jean Paul Gaultier dress with a revealing thigh-high split

Ensuring the snap was of a sensual nature, she stood with her leg forward to partially show some skin, displaying her impressive tan.

Demi also put on a steamy display on Wednesday as she shared some Instagram shots of herself wearing an incredibly skimpy swimming costume.

She left little to the imagination as she relaxed in the sunshine in a red string swimsuit which plunged below the navel.

The beauty made the most of her hourglass curves and showed off her impressively flat stomach and ample assets in her attire. 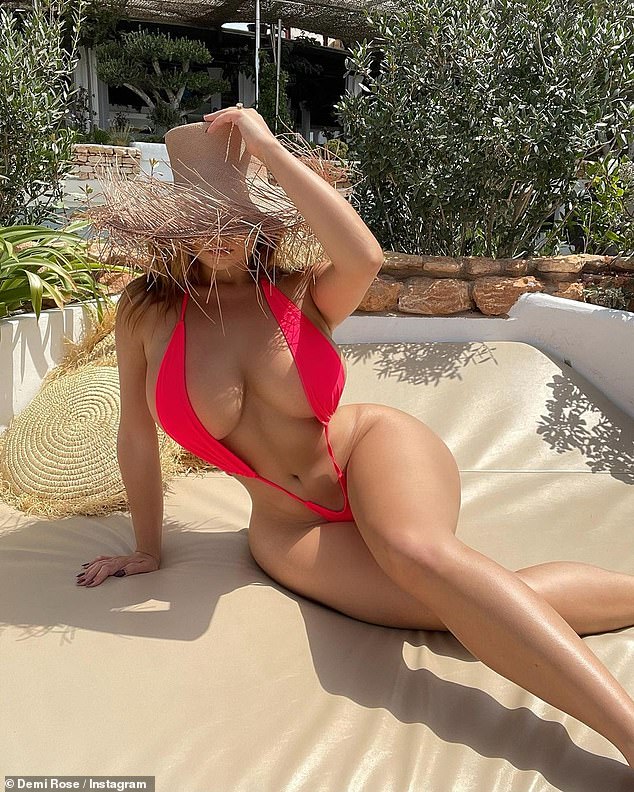 Hot out here: Demi also set pulses racing on Wednesday as she shared some Instagram shots of herself wearing a plunging red swimsuit on the Spanish island of Ibiza 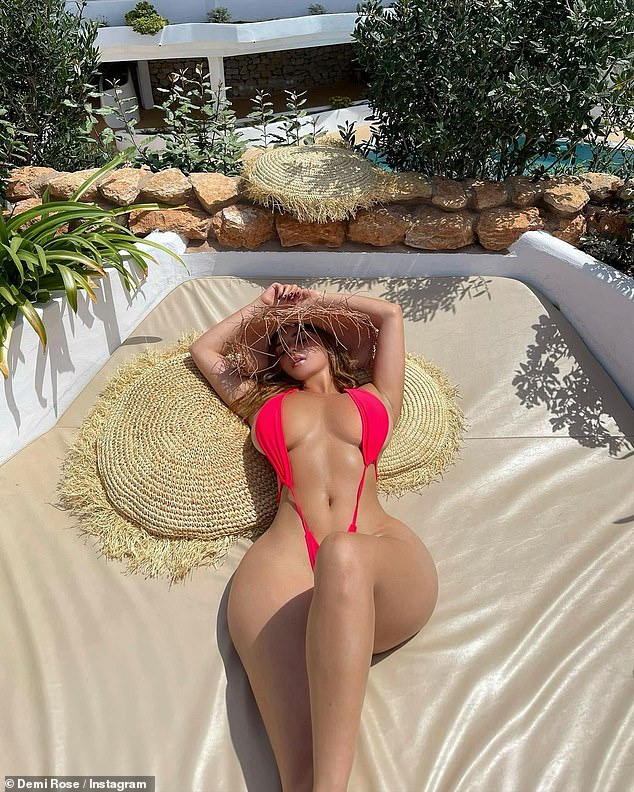 Time to relax: The influencer left little to the imagination as she relaxed in the sunshine in a red string swimsuit before posing up a storm for the snaps

The Birmingham beauty could be seen holding the straw hat that was perched on her head as she sat on a day bed to work on her glow.

In another picture, Demi could be seen laying on her front as she gazed off into the distance.

Sharing the images online, she wrote: ‘Suns out.’ 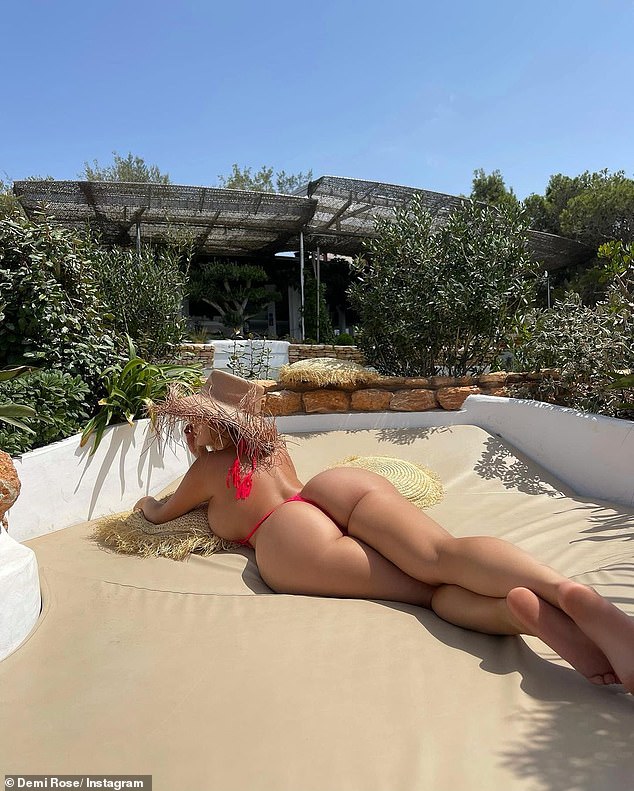 Just peachy: Demi worked on her glowing tan and she posed in the barely-there swimsuit