Demi Moore, 59, is a pretty pinup in a hot pink string bikini as Bruce Willis’ wife gives her a compliment: ‘Looks good on you’

Demi Moore is in incredible shape and she doesn’t mind showing off her curves.

On Monday the Inside Out author shared a look at her bikini body as she stood on a boat in the Mediterranean. The beauty is one of the designers on the suit she is wearing for Andie’s Swim.

‘Soaking up summer,’ the brunette wrote in her Instagram caption. And the current wife of Demi’s ex-husband Bruce Willis seemed to approve. Emma Willis wrote in the comments box, ‘And it looks good on you!’ 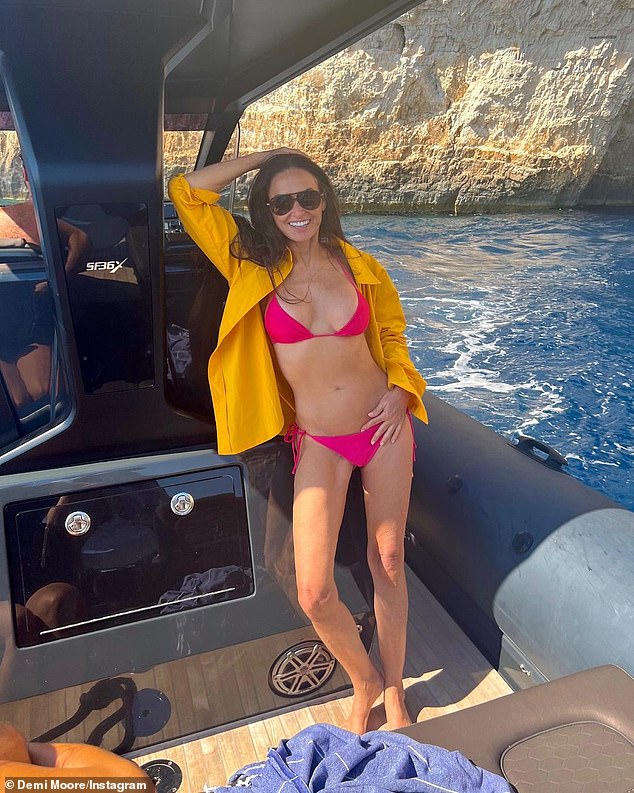 Super siren: Demi Moore is in incredible shape and she doesn’t mind showing off her curves. On Monday the Inside Out author shared a look at her bikini body as she stood on a boat. The beauty is one of the designers on the suit she is wearing for Andie’s Swim

Demi and Emma have become good friends as they help Bruce who suffers from aphasia which is a cognitive disorder that affects a person’s ability to communicate.

Last week Moore was seen in a black suit from Andie’s Swim.

The St Elmo’s Fire actress posted a swimsuit photo to her Instagram account on Tuesday where she looked as healthy as can be.

She said her dog Pilaf liked this plunging black suit the best: ‘Meet Pilaf’s favorite suit — the Tropez in Crochet.’ 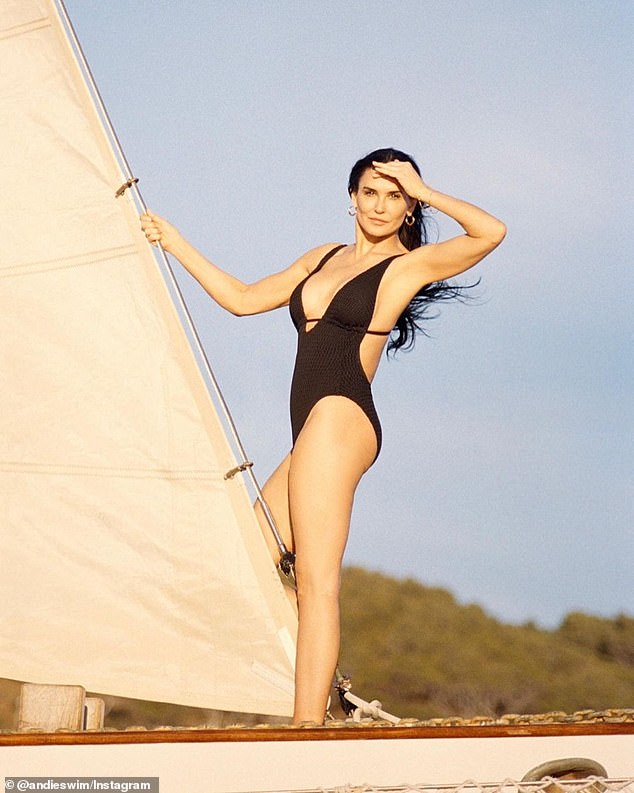 A 10! Moore posted a new swimsuit photo for Andie Swim to her Instagram account on Tuesday where she looked healthy as can be

This comes after her ex-husband Ashton Kutcher, 44, revealed he is ‘lucky to be alive’ after suffering from a rare autoimmune disorder that left him unable to hear, see or walk.

Kutcher followed up on Monday saying he was ‘all good’ and has ‘fully recovered’ from a health scare he suffered years ago.

In her memoir, Inside Out, she said that That 70s Show star was the love of her life, until he drifted away from her.

He was caught numerous times cheating by tabloids like Star magazine before he divorced Moore.

Ashton is now wed to his That 70s Show co-star Mila Kunis.

But Demi and Ashton seem to be on better terms these days as Demi made a commercial with Mila which was hooked on a joke about Kutcher.

Last week Kutcher said on Twitter ‘[b]efore there are a bunch of rumors/ chatter/ whatever out there’ about his present condition. 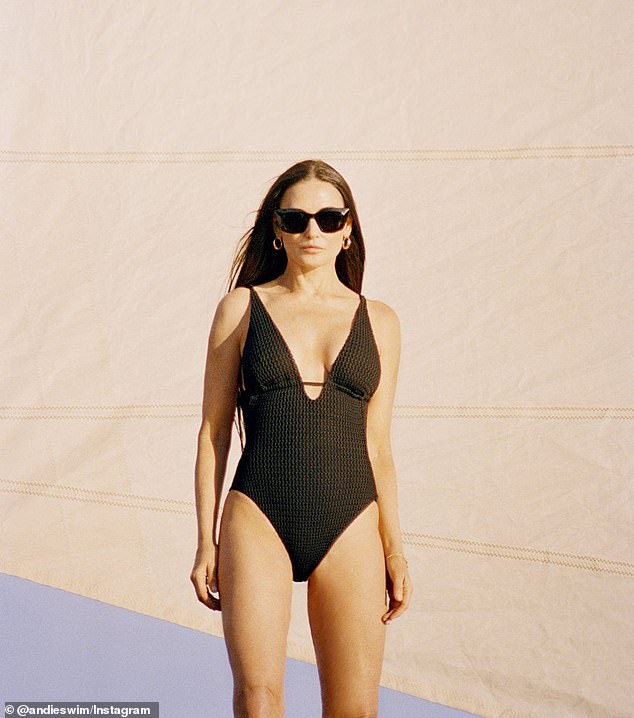 She does not age: The siren was seen in a plunging suit; she has helped design the bathing line

‘Yes, I had a rare vasculitis episode 3yrs ago. (Autoimmune flair up) I had some impairments hear, vision, balance issues right after. I fully recovered. All good. Moving on. See you at the 2022 NY Marathon w/Thorn,’ he wrote.

Ashton spoke about the condition that upended his life in a sneak peek of an upcoming episode of Running Wild with Bear Grylls: The Challenge, on which he detailed the horrific symptoms he suffered from as a result of his autoimmune disorder. 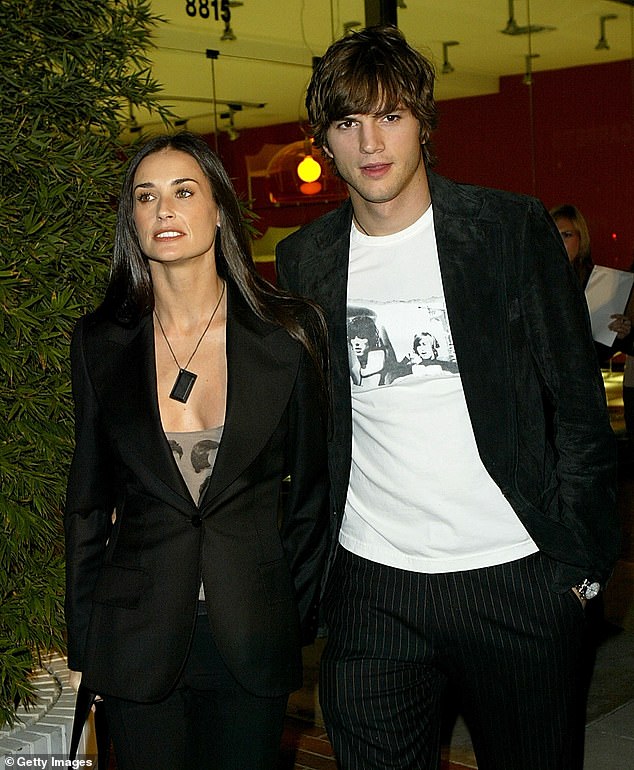 They were a power couple: Demi and Ashton were seen at the opening of the Stella McCartney Store in Beverly Hills in 2003

According to the Mayo Clinic, vasculitis involves the inflammation of the blood vessels causing the walls to thicken, reducing the width of the passageway through the vessel.

If blood flow is restricted, organ and tissue damage can occur. There are many types of vasculitis, and most of them are rare.

According to Kutcher, his harrowing experience with vasculitis, though scary, gave him a new-found appreciation for his health and his senses, explaining that he hadn’t ever truly realized how essential they were, until he lost them.

‘You don’t really appreciate it, until it’s gone,’ admitted the human rights activist. 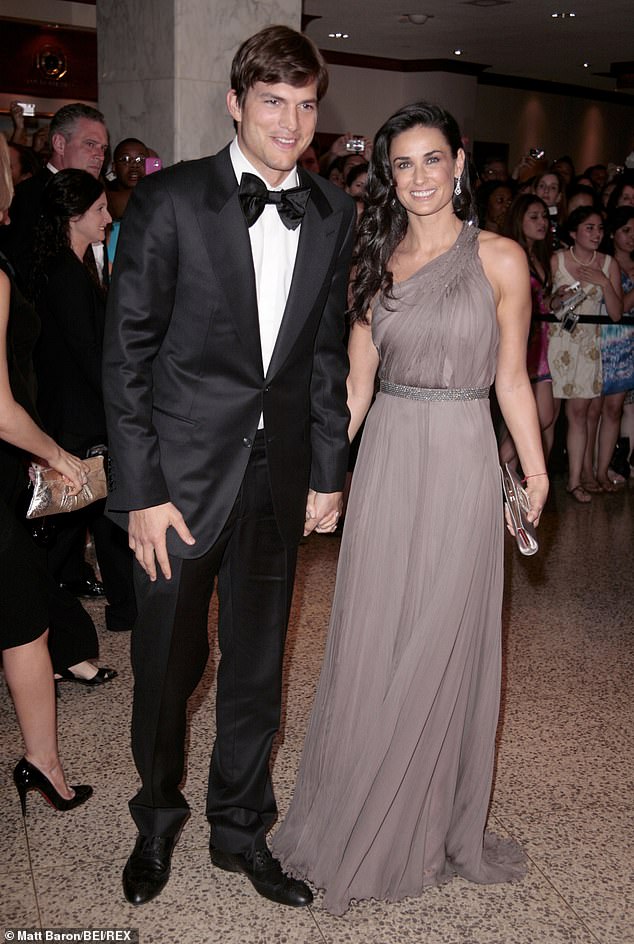 They had a glow: The stars at The Annual White House Correspondents’ Association Gala Dinner at the Washington Hilton Hotel in 2009

He added that he is ‘lucky to be alive’.

The actor revealed that it took him a year to build up his strength, prompting Grylls to praise his ‘strength through adversity’.

The condition that could have cost Ashton Kutcher his sight: What is vasculitis and how is it treated?

Source: WebMD and The Vasculitis Foundation

The father of two said he considers challenges an opportunity for growth.

‘The minute you start seeing your obstacles as things that are made for you, to give you what you need, then life starts to get fun, right? You start surfing on top of your problems instead of living underneath them,’ he said.

The episode featuring Ashton will be released Monday night on National Geographic.

Kutcher did not specify when exactly his medical issues began, however the actor maintained a relatively low profile during the pandemic lockdown, sharing just a few Instagram posts from the home he shares with Kunis, 38, while the pair were quarantining with their children.

The actors have also been rigorous about continuing to wear face masks for almost all of their public outings since the pandemic began, with both opting to go without face coverings on just a handful of occasions since March 2020, even after their hometown of Los Angeles removed all mask mandates.

Last month, the pair were both seen sporting face masks as they stepped out for a grocery store run with their two children.

However, Kutcher chose to go without a face covering this weekend, when he put on a very sporty display while enjoying a beach outing with his family – taking the opportunity to show off his athletic skills while playing some football.

The Stoner Cats star enjoyed playing some football on the beach with his wife in Santa Barbara.

That 90s Show star was shirtless and wore a pair of red and blue knee length swim trunks and a white billed cap as he threw the ball.

An adorable black dog tried to get in on the action.

The game got pretty intense as Kutcher – who is a former assistant high school football coach – was seen lying on the sand while triumphantly raising the ball in the air to prove he’d made a difficult catch.

In the preview clip from Kutcher’s upcoming appearance on Grylls’ latest show, he did not go into detail about his vasculitis treatment process, however the Mayo Clinic states that treatment for the condition typically ‘focuses on controlling the inflammation and managing any underlying conditions that may be triggering the vasculitis’.

The most common type of drug prescribed for vasculitis sufferers are corticosteroids, which are used to control the inflammation of the blood vessels.

However these can have a number of unpleasant and severe side effects, including weight gain, diabetes, and weakened bones. 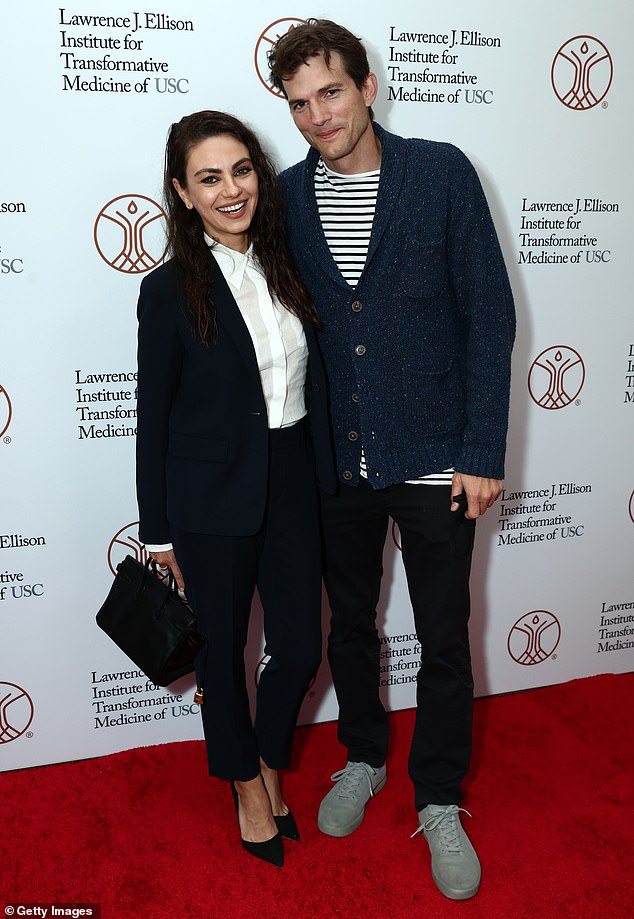