Now, a flirty exchange between Demi and Mike has sent their fans into overdrive.

On Thursday, Demi, 27, shared an unedited photo of herself in a leopard-print bikini alongside an empowering caption about appreciating one’s body, imperfections and all. 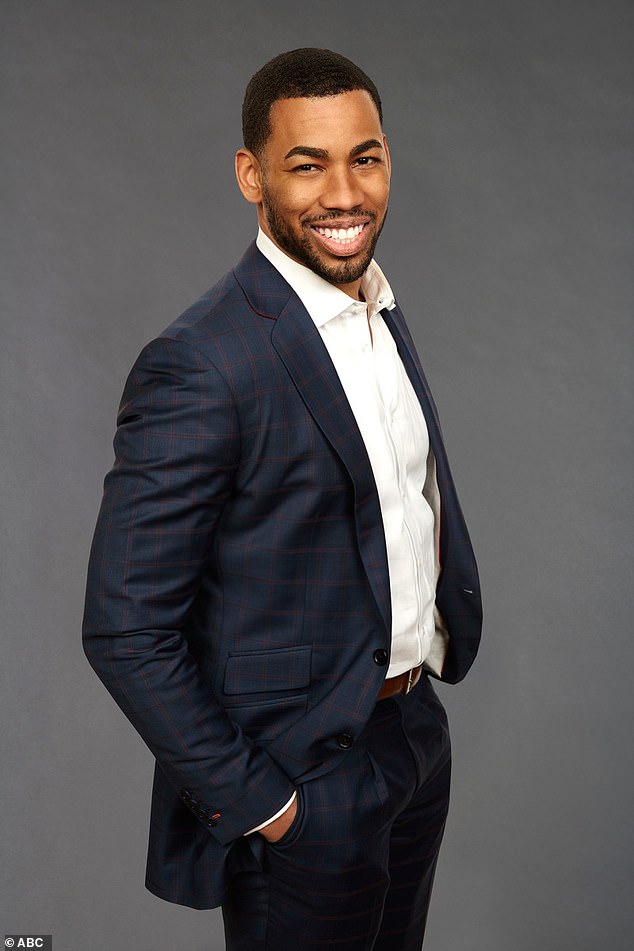 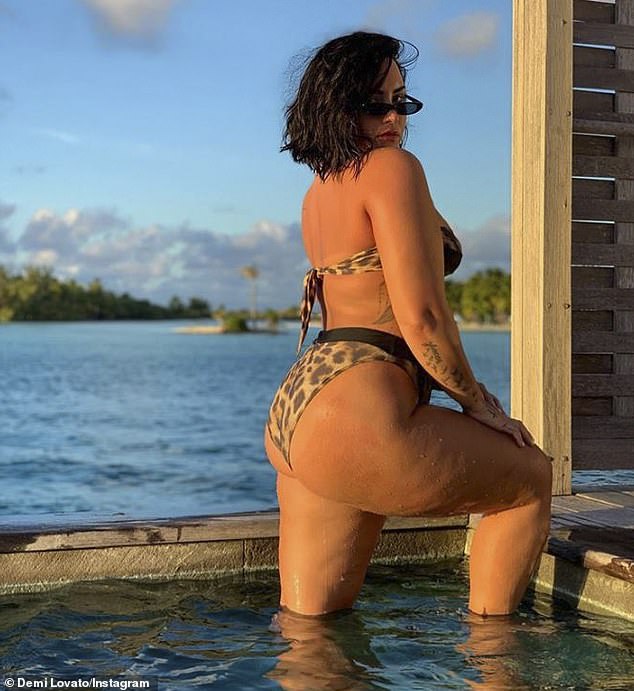 Beautiful and brave: Demi shared this stunning and unedited bikini photo on Instagram on Thursday evening from her holiday to Bora Bora in May as she wrote about being ‘authentic’

Thousands of supportive comments flooded in — including one from Bachelorette fan-favorite Mike, 31.

‘Look at me like that again,’ he wrote. ‘Love yaself.’

In response, Demi sent a kissy emoji and one with its tongue sticking out, prompting hundreds of fans to chime in with comments begging the two to get together.

The excitement comes as the songstress faced her ‘biggest fear’ by posting the stunning, untouched shot as she soaked up the sun in a leopard print bikini by luxury swimwear brand PilyQ.

Flirtatious fun: Demi replied to Mike’s saucy Instagram  comment with a kissy emoji and one with its tongue sticking out, prompting hundreds of fans to chime in with comments begging the two to get together 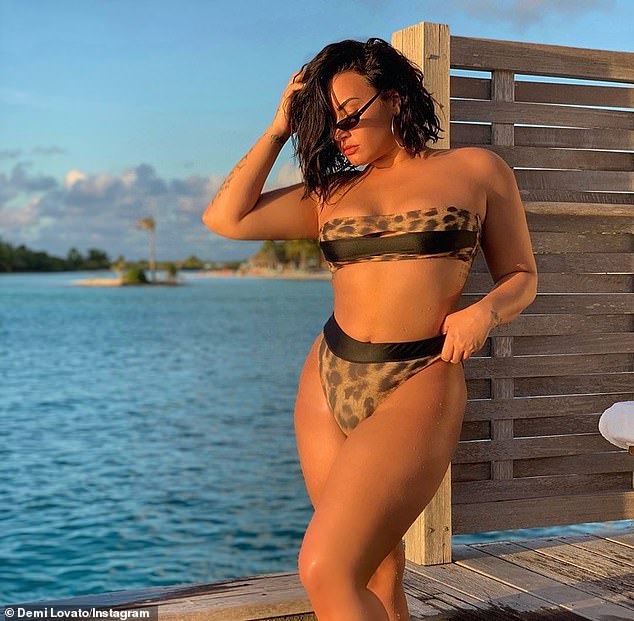 Sun kissed: This is the (just as beautiful) image which Demi shared back in May on  Instagram, which appears to have been edited

‘I hope to inspire’: Demi shared this post about learning to love the ‘raw and real’ version of herself

It was taken on her trip to Bora Bora Four Seasons in May, four months after Demi shared an edited (and just as beautiful) picture of herself on the same trip.

‘This is my biggest fear. A photo of me in a bikini unedited,’ she wrote in a lengthy caption to her 73 million followers. ‘And guess what, it’s CELLULIT!!!!

‘I’m just literally sooooo tired of being ashamed of my body, editing it (yes the other bikini pics were edited – and I hate that I did that but it’s the truth) so that others think I’m THEIR idea of what beautiful is, but it’s just not me.

Demi looked over her shoulder in the photo, flaunting her hourglass curves as she stepped out of a pool while on a tropical holiday at the Four Seasons.

‘This is what I got. I want this new chapter in my life to be about being authentic to who I am rather than trying to meet someone else’s standards,’ she wrote.

‘So here’s me, unashamed, unafraid and proud to own a body that has fought through so much and will continue to amaze me when I hopefully give birth one day.

‘It’s such a great feeling to be back in tv/film while not stressing myself with a strenuous workout schedule before 14 hour days, or depriving myself from a real birthday cake rather than opting for watermelon & whip cream with candles because I was terrified of REAL cake and was miserable on some crazy diet s**t. 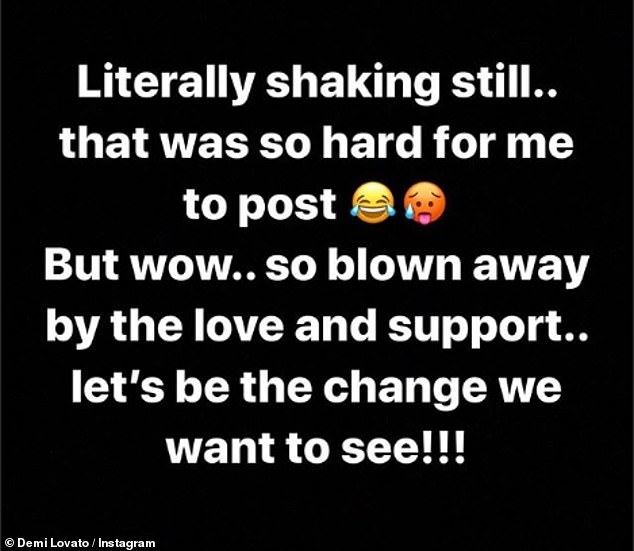 Word’s out: Demi later took to social media to thank everyone for their support and said she was ‘still shaking’ after having posted her picture

‘Anyway, here’s me, RAW, REAL! And I love me. And you should love you too! Now back to the studio.. I’m working on an anthem.. also.

‘Just so everyone’s clear.. I’m not stoked on my appearance BUT I am appreciative of it and sometimes that’s the best I can do. I hope to inspire someone to appreciate their body today too.’

Celebrities turned out in droves to support Demi’s post, with Ashley Graham, Jenna Dewan, Jamie Lee Curtis and Ashley Greene all encouraging Demi to stay true to her beautiful self. 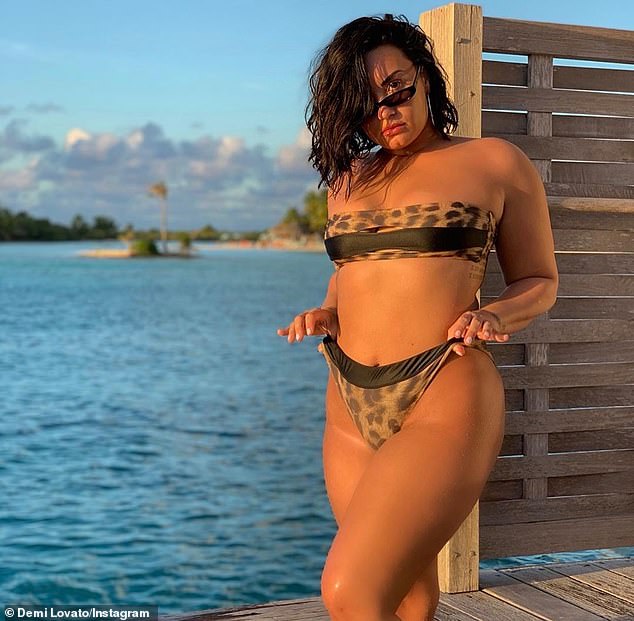 So bold: Demi flaunted her hourglass curves as she stepped out of a pool while on a tropical holiday at the Four Seasons 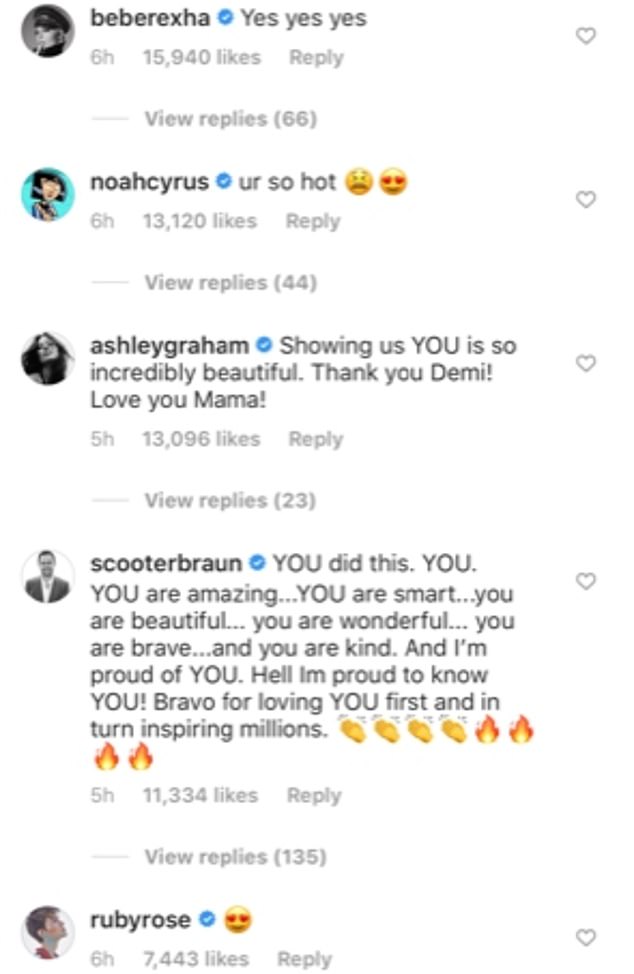 Supportive: A host of stars took to the comments section to applaud Demi for her latest post

Scooter Braun wrote: ‘YOU did this. YOU. You are amazing. YOU are smart… you are beautiful… you are wonderful… you are brave… and you are kind. And I’m proud of YOU.

Hell Im proud to know YOU! Bravo for loving YOU first and in turn inspiring millions.’ [sic].

Sara Sampaio wrote: ‘You are beautiful the way you are. So proud of you.’

Demi uses her platform to educate fans and followers about mental health and wellness, and is a longtime advocate for gay rights.

In 2015, she released a song called Confident as she battled with her own journey of self-acceptance.

She said at the time: ‘I have never been confident enough in my own skin to feel sexy. Now that I’m feeling great and I feel confident, I’m proud of the skin that I’m in.

‘I’m wanting to share that with the world and showing everyone how you can go from being very insecure with body image issues to feeling so proud of your body that you want to show it to the world.’ 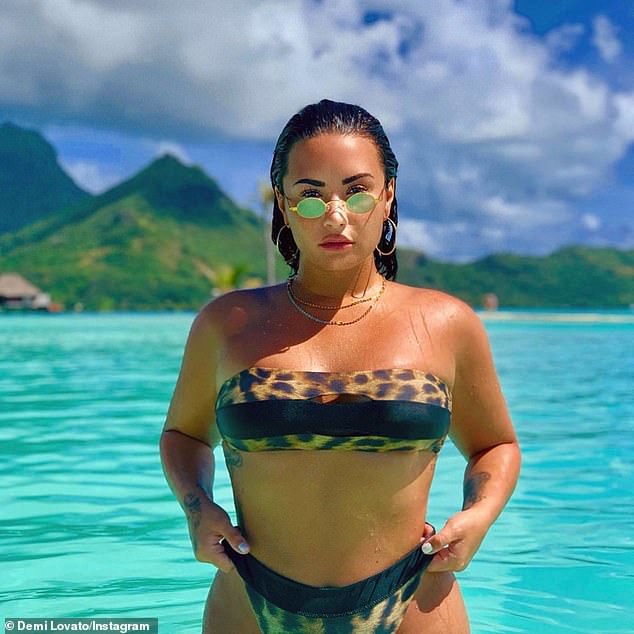 Cool for the Summer: Demi shared a series in the swimsuit earlier this year after a whirlwind vacation with friends in French Polynesia