Declan Donnelly and wife Ali Astall join Lucy Mecklenburgh and Ryan Thomas as stars clap for the carers in weekly salute to the NHS, police and key workers helping to fight COVID-19

Declan Donnelly and wife Ali Astall joined Lucy Mecklenburgh and Ryan Thomas in leading a slew of stars in a nationwide applause in honour of the NHS, police and key workers during the coronavirus pandemic.

Presenter Dec, 44, and Ali, 41, were seen joining the nation outside their home and joining in with the applause which rang out across the nation on Thursday – as staff across the country continue to place themselves in harm’s way to beat coronavirus.

Joining Dec and Ali in the national event were stars including the Beckham family, Ryan Thomas and Lucy Mecklenburgh, and Brian May and wife Anita Dobson. 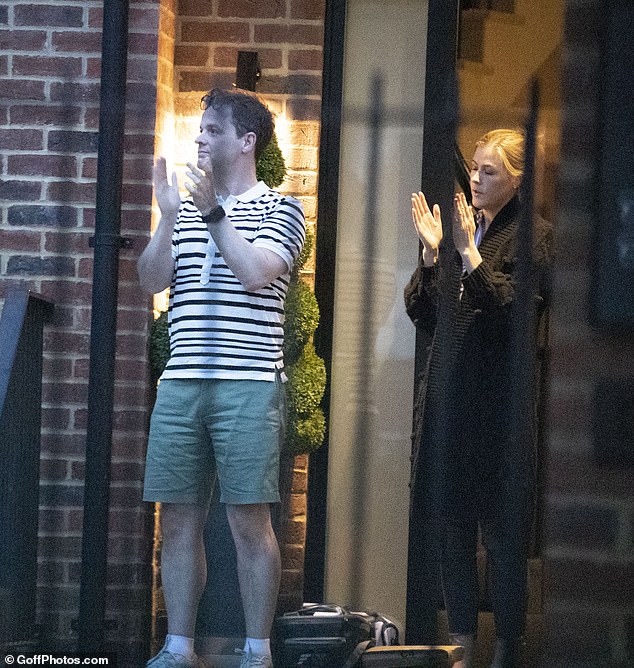 Praise: Declan Donnelly and wife Ali Astall led a slew of stars in a nationwide applause in honour of the NHS, police and key workers during the coronavirus pandemic

Dec and Ali looked focused as they applauded enthusiastically on their front doorstep.

Lucy cradled Roman as Scarlett clapped alongside her outside their home.

Queen rocker Brian May, 72, joined actress wife Anita Dobson on their doorstep to show their appreciation. 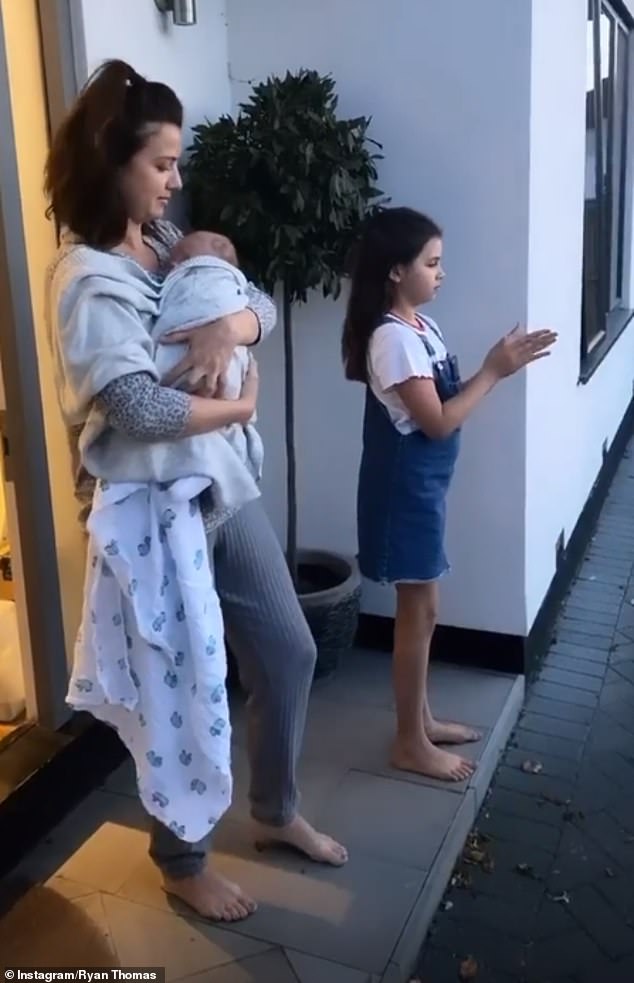 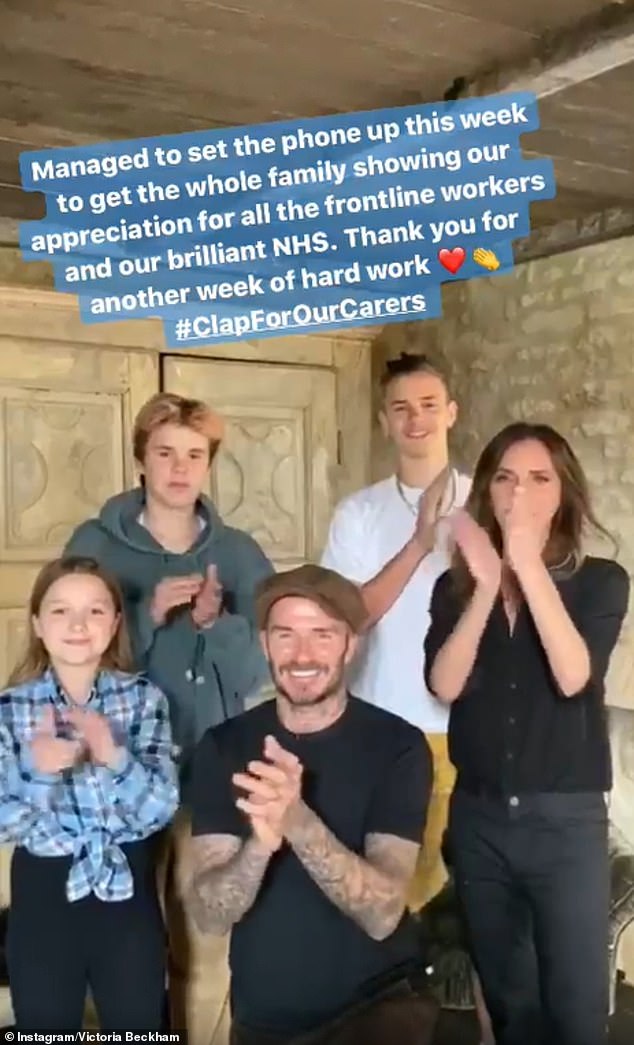 The Beckhams join in with the clap for carers event this evening, as millions of Brits thanks the NHS and key workers

The couple were seen clapping before giving the thumbs up to the camera, with Anita blowing a kiss.

The guitarist captioned the clip: ‘To our front-line fighters – A HUGE THANK YOU – Bri & Anita.’

The Beckham family once again showed their support from lockdown with Victoria, 45, David, 44, and their children Romeo, 17, Cruz, 14, and Harper, eight applauding.

Victoria wrote: ‘Managed to set the phone up this week to get the whole family showing our appreciation for all the frontline workers and our brilliant NHS. 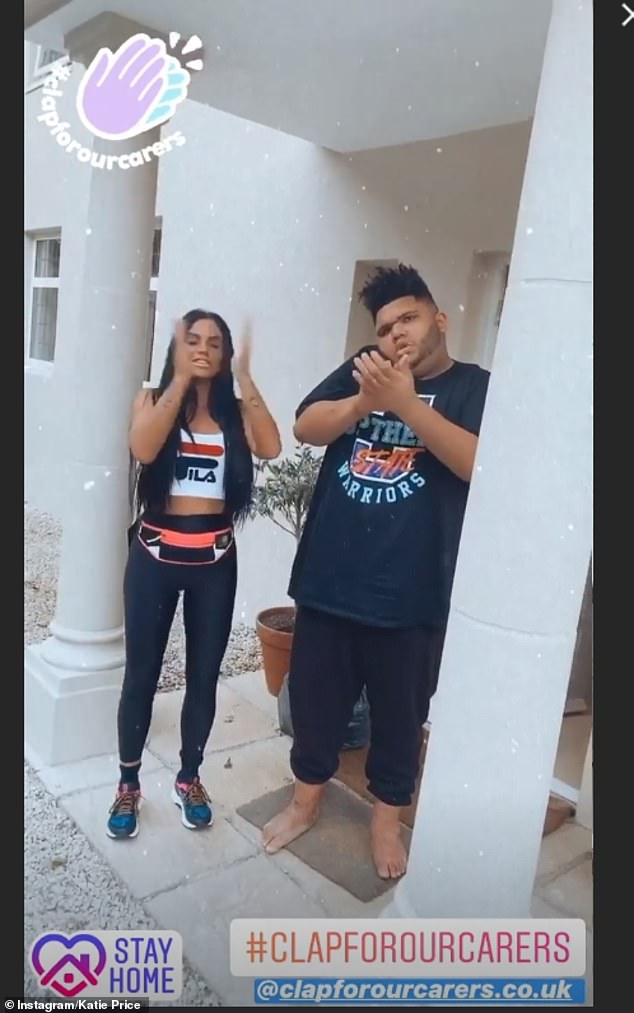 Praise: Katie Price, 41, and her disabled son Harvey, 17, also came out in support of the NHS once more as the pair clapped on their doorstep 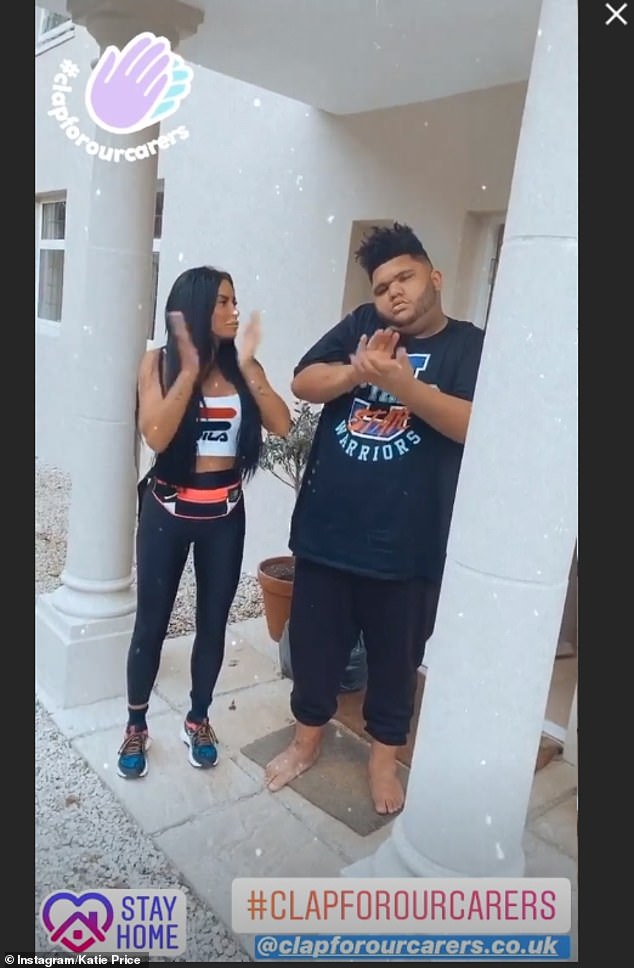 Nationwide event: Katie said: ‘We’re gonna do a big clap for the NHS, all the doctors and nurses, big clap’ as Harvey cheered

‘Thank you for another week of hard work.’

Myleene Klass applauded with baby son Apollo and daughter Hero, nine, in tow as they wore blue for the NHS.

Myleene, 42, said: ‘Woo for the NHS!’ as she and her children wore blue and banged kitchen equipment in celebration.

Katie Price, 41, and her disabled son Harvey, 17, also came out in support of the NHS once more as the pair clapped on their doorstep.

Katie said: ‘We’re gonna do a big clap for the NHS, all the doctors and nurses, big clap’ as Harvey cheered.

Harvey then said: ‘Thank you NHS’ as the mother-son duo continued clapping.

For the past two weeks, NHS workers have been the recipients of the cheers and claps from the nation. 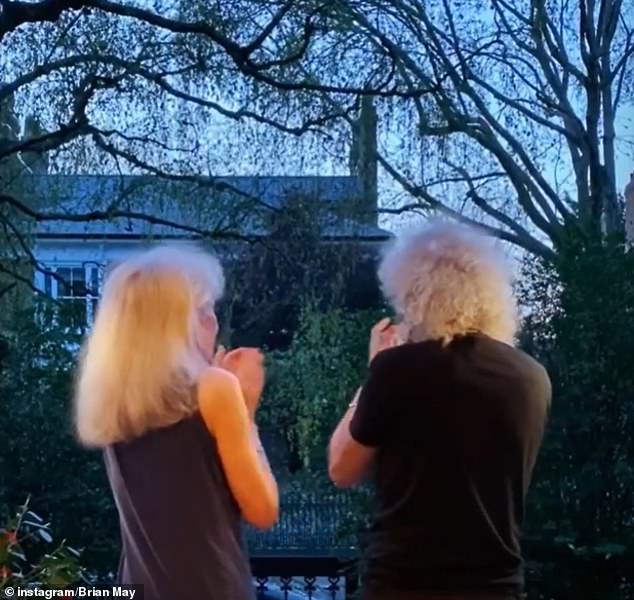 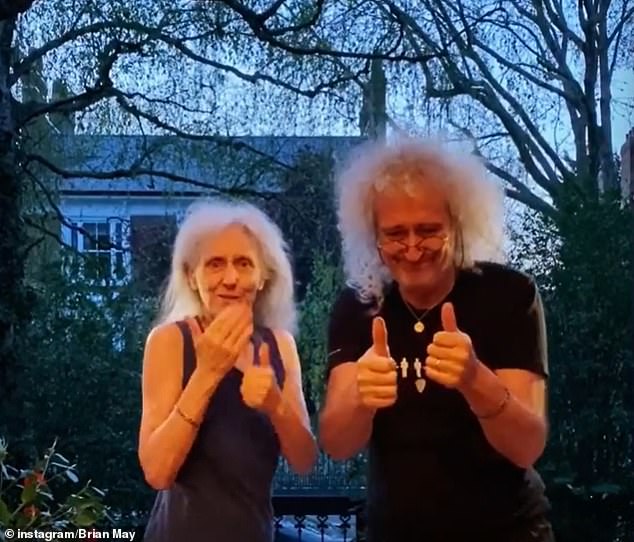 Support: The couple were seen clapping before giving the thumbs up to the camera, with Anita blowing a kiss

But last week the event, organised by the Clap For Our Carers campaign, was expanded to include all key workers, such as supermarket staff, the emergency services and teachers who are continuing to work.

It comes as an urgent new appeal was launched tonight in an attempt to raise millions of pounds to support NHS nurses, doctors, staff and volunteers.

NHS Charities Together hopes the #OneMillionClaps campaign will raise at least £5million.

The appeal will be promoted with a short film voiced by David Walliams and featuring NHS staff and people from across the UK.

#OneMillionClaps is part of National COVID-19 URGENT APPEAL, which was launched two weeks ago by NHS Charities Together – the official umbrella organisation for NHS charities.

The appeal asks people to donate £5 by texting the word ‘CLAP’ followed by any messages of support to 70507. 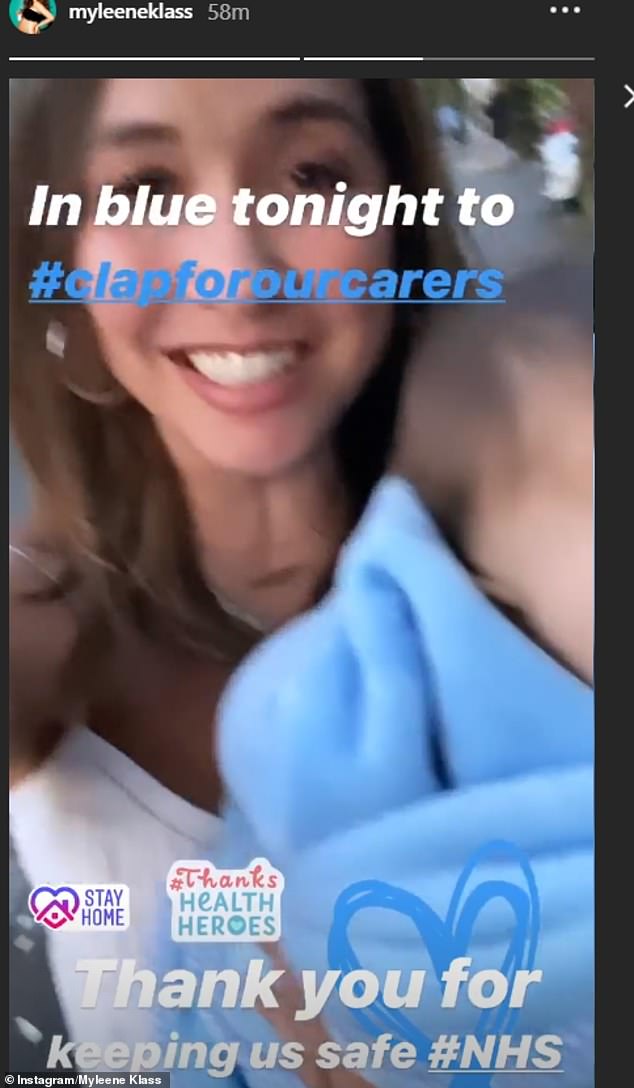 To you: Myleene Klass applauded with son Apollo and daughter Hero, nine, in tow as they wore blue for the NHS 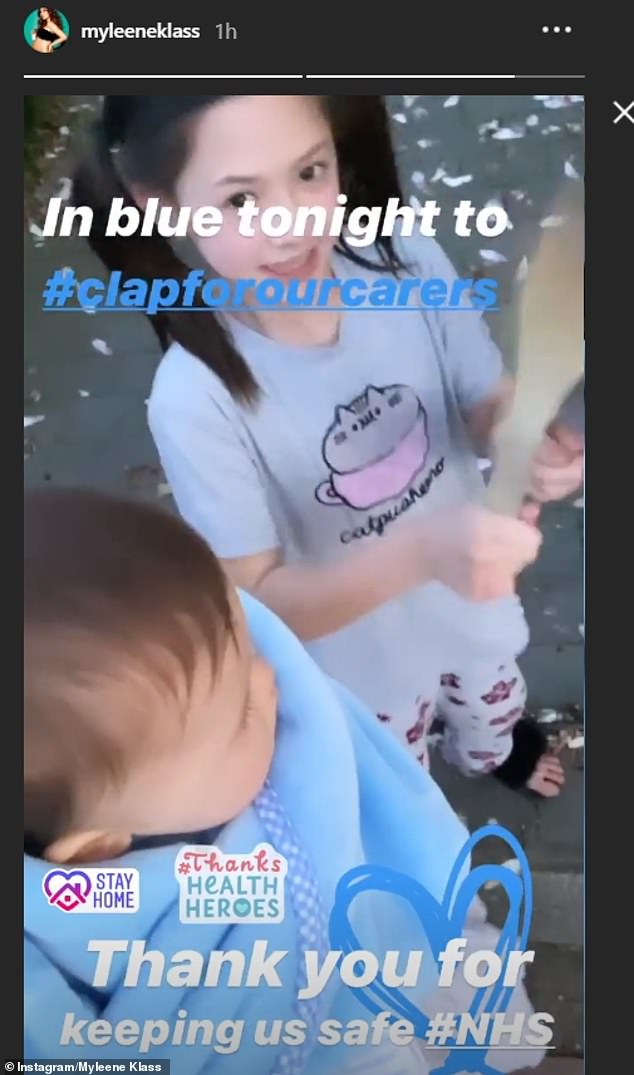 Cute: Apollo and Hero were among the younger Brits showing their support

Each £5 donation will be used to provide a range of supplies and support for NHS staff and volunteers- including food, travel, accommodation and counselling. Individual messages of support will be also forwarded to local NHS charities and sent to the donors’ local hospital.

The goal is to inspire at least a million people to donate £5 – meaning more than £5million will be raised for NHS staff in just one evening.

Ellie Orton, Chief Executive of NHS Charities Together said: ‘Every single penny raised for nurses, doctors and NHS staff in this way will go to help those health service workers who are working so hard and risking so much to help us.

‘Thousands of staff are risking their lives every day for us and many of them are now sick themselves or at breaking point.

‘I really hope #OneMillionClaps inspires those who can to give a donation that will make a real difference to the amazing staff and volunteers who are daily saving lives and battling against this horribly virus on our behalf.

‘If we can raise £5 million tonight, it will go a long way to providing them and their families with the support they so desperately need.’

The UK recorded 881 more coronavirus deaths on Thursday, taking Britain’s total to 7,978 as its coronavirus crisis rumbles on and 4,344 more positive tests pushed the number of patients, past and present, to 65,077.

The grim tally is considerably smaller than the devastating 938 announced on Wednesday but still represents the second biggest surge since the epidemic began almost six weeks ago.

Britain has so far managed to avoid the dark milestone of announcing 1,000 deaths in a single day, something that has only happened in the US. 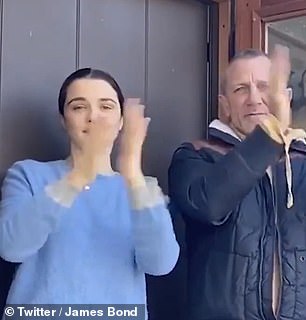 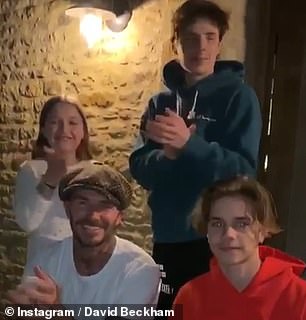 We support you! Daniel Craig and his wife Rachel Weisz (left) and The Beckham family (right) led the applause at the first event on March 26