A trick of two halves! She’s been sliced, diced and decapitated. Now, 100 years after the first woman was sawn in half on stage, Paul Daniels’ widow DEBBIE McGEE reveals what it’s like to pull off eye-popping feat 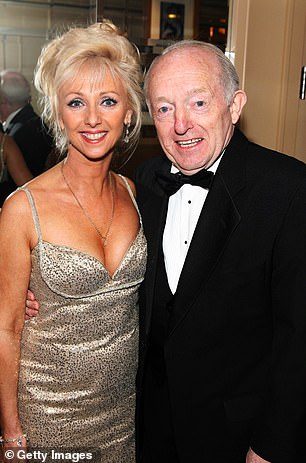 My first appearance on the long-running Paul Daniels Magic Show was all the more memorable for the prank Paul played on me during rehearsals for the infamous ‘sawing-a-woman-in-half’ illusion.

After tying me up with ropes, he put me in a wooden crate and closed the lid, then announced to the camera crew and production staff: ‘OK everyone, let’s take a 15-minute break for coffee.’

Of course, he was joking. It was the first of many hundreds of illusions I performed on the show, which ran from 1979 to 1994.

The demands of a prime-time programme that drew up to 12 million viewers every Saturday night meant we were always under pressure to find new material, including spectacular variations on ‘sawing me in half’.

Over the years I was sliced, diced, cremated, crushed and decapitated — and the fact that this was at the hands of the man who later became my husband seemed only to add to the audience appeal.

The question Paul was most often asked by male fans was: ‘Can you saw my wife in half?’ I wonder what they would have said if he’d replied ‘Yes!’

The enduring popularity of the trick is something its creator could hardly have anticipated when he first performed it at the Finsbury Park Empire in North London, exactly 100 years ago next Sunday.

The Magic Circle is marking the centenary with an evening of online events to be streamed on Facebook — and as its first female honorary vice-president, I’m proud to be contributing my memories of the trick.

It was the brainchild of a British magician who was born Percy Thomas Tibbles but wisely tinkered with the letters of his surname to create the stage name of P. T. Selbit.

He was one of my husband’s heroes and they had much in common, both being entrepreneurial types who were always thinking ahead of the game.

What Selbit realised was that audiences were tiring of the gentler styles of magic popular before World War I. 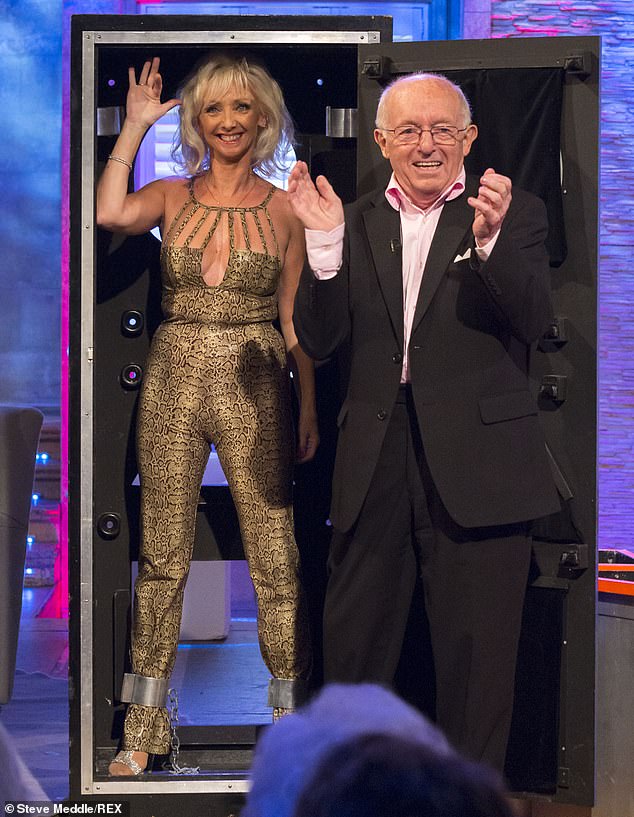 Something more sensational was required — and in an era when silent movies featured pretty young heroines being tied to railway lines and rescued at the last minute, there was money to be made from damsels in distress.

If Selbit had had his way, one of those damsels would have been Christabel Pankhurst, whose mother Emmeline was leader of the women’s suffrage movement.

According to Noel Britten, president of The Magic Circle, Selbit may have realised that those opposed to female suffrage might delight in seeing one of its champions selected as a ‘victim’.

Perhaps wisely, Ms Pankhurst turned down the chance to become Selbit’s guinea pig and her place was taken instead by his principal assistant, Betty Barker.

That a woman should take part at all was possible only because of a change in female fashion. 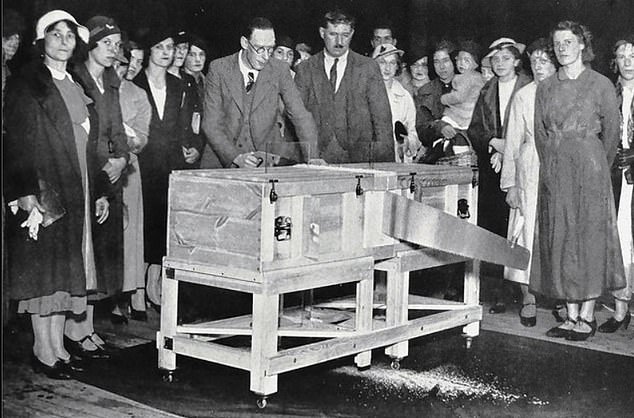 Pictured: Selbit performing the sawing a woman in half illusion

During the Victorian era, women’s voluminous clothes meant it would have been impossible for them to fit inside the box — but Betty Barker and others like her paved the way for the glamorous magicians’ assistants of the future.

I have a lot of sympathy for what Betty must have gone through in those early performances because, decades later, we recreated the trick for Paul’s TV show Secrets, exactly as Selbit performed it.

Unlike later versions of the trick in which the assistant’s head and feet are seen poking out of the box, Betty was entirely inside it.

Nor did Selbit favour the kind of shiny wooden cabinet popular today. These expensive props generally remain undamaged but Selbit used rough wooden crates, which he divided with a large saw — and I can tell you from personal experience that the loud vibrations and splintering sounds as the teeth tore through the cheap plywood were terrifying.

Of course, this only made it more entertaining for the audience and soon Selbit’s trick was being copied in America and beyond, with ever more gory presentations.

One magician had women in nurse’s uniforms stationed in theatre lobbies. Another had parking spaces outside marked ‘Reserved for Ambulances’, ramping up the idea that something might go terribly wrong.

It certainly seemed to have done so when, in 1956, the BBC’s Panorama programme featured an Indian illusionist known as The Great Sorcar slicing a young woman in half with a circular saw.

The show was transmitted live and when it ran out of time, presenter Richard Dimbleby stepped forward to say goodbye before the ‘corpse’ had returned to life, prompting hundreds of anxious calls to the BBC switchboard. 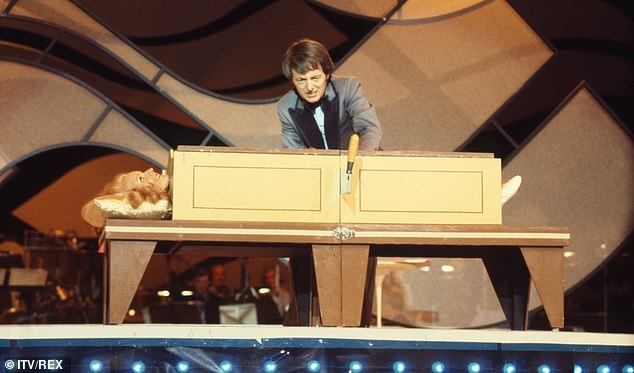 In the 1970s, Peruvian illusionist Richiardi went so far as to spatter blood and entrails over the stage during the illusion.

Paul never went that far, although I was sawn into thirds or even eight pieces, and had a box containing my torso section pulled away from those in which my face was still smiling and my hands and feet were still wiggling.

As to how it’s done, we of The Magic Circle never divulge our secrets. But I can tell you that, like much magic, it demands quite a lot of the assistant.

Paul liked to tell the story of one magician who fell ill and asked a replacement to perform the saw trick with his assistant.

They did it for two weeks and when the magician returned to work, his stand-in asked him how it was done. That shows how much work the girl in the cabinet was doing!

Today, when I speak to magicians about choosing their assistants, I always say ‘don’t just put your girlfriend in the box’ — and although Paul and I eventually fell in love and married, we had great respect for each other professionally.

He thought everything through for months beforehand and I trusted him completely.

Sometimes, after endlessly practising certain illusions, he would pull them from the show with just days to go because he was worried they might put me in danger. 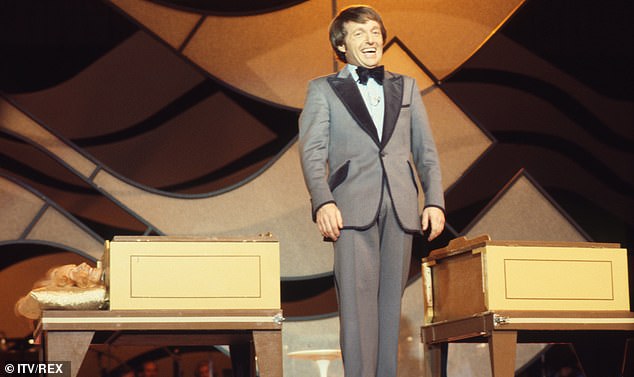 Debbie McGee, pictured after being ‘cut in half’ says sometimes Paul would pull certain illusions from the show last minute because he was worried that they might put her in danger

In case things went awry, we had an emergency code-phrase — ‘Mrs Robinson’.

Heaven knows how he came up with that. But I had to use it on only one occasion, when a lit torch he thrust through a wooden box I was held in set fire to the interior.

It took some time for Paul to hear me above the studio audience and live band — and as a curtain was brought down, I emerged spluttering from the fumes.

Thankfully, there were never any problems like that with the saw trick. But there is the potential for things to go wrong when you are in such a confined space.

The smaller the box, the better the illusion, because it seems you have less opportunity to escape the blade. Our cabinets were custom-built for me.

Even with all today’s technology, people are still entertained by the illusion. It’s one of the oldest and, in my view, still one of the best.

Sunday’s event, starting at 6pm, will be streamed on The Magic Circle Unlocked Facebook page.