Danielle Armstrong took a trip down memory lane as she revealed she is doing her first bikini photoshoot since giving birth to daughter Orla in May.

The reality star, 32, shared a photo of herself taken when she took her daughter home from the hospital to contrast with her jaw-dropping figure today.

Danielle has shed an incredible 3st since she gave birth, saying she still felt like she was pregnant a few weeks after having Orla. 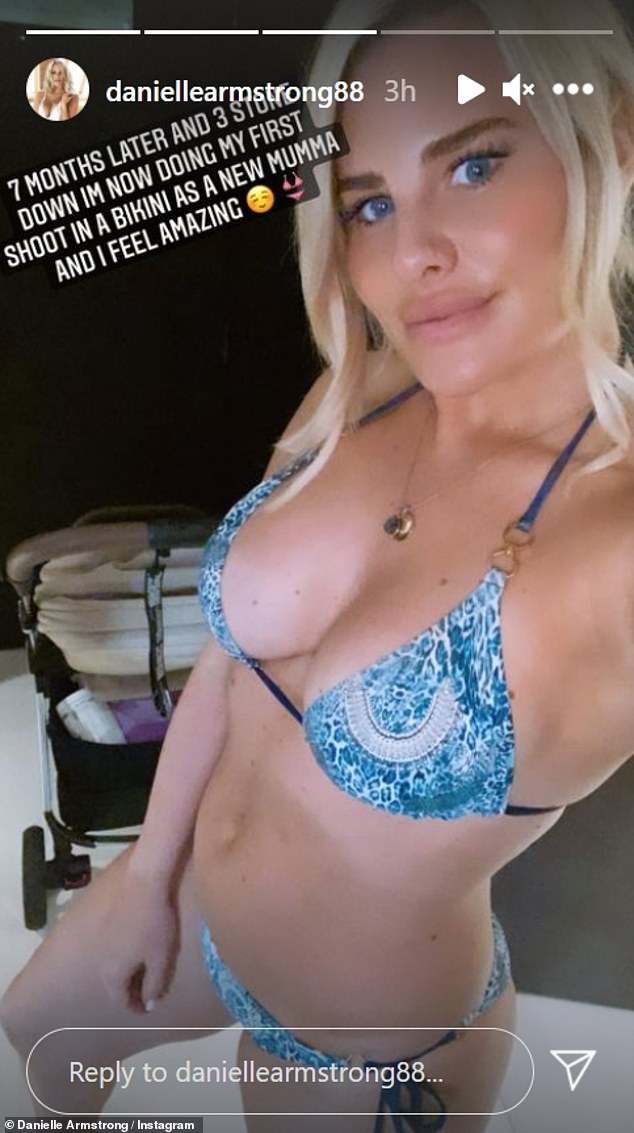 Stunning: Danielle Armstrong took a trip down memory lane as she revealed she is doing her first bikini photoshoot since giving birth to daughter Orla in May

In the first snap of herself taking the tot to the car, Danielle captioned it with: ‘The day I stepped outside the hospital with my newborn baby girl’.

She then shared a photo with her fiancé Tom Edney as they took Orla for a stroll shortly after she was born.

Danielle wrote: ‘Two weeks after having Orla I still felt like I was pregnant’.

The former TOWIE star then posted a snap of herself showcasing her washboard stomach in a blue bikini as she prepared for her photoshoot. 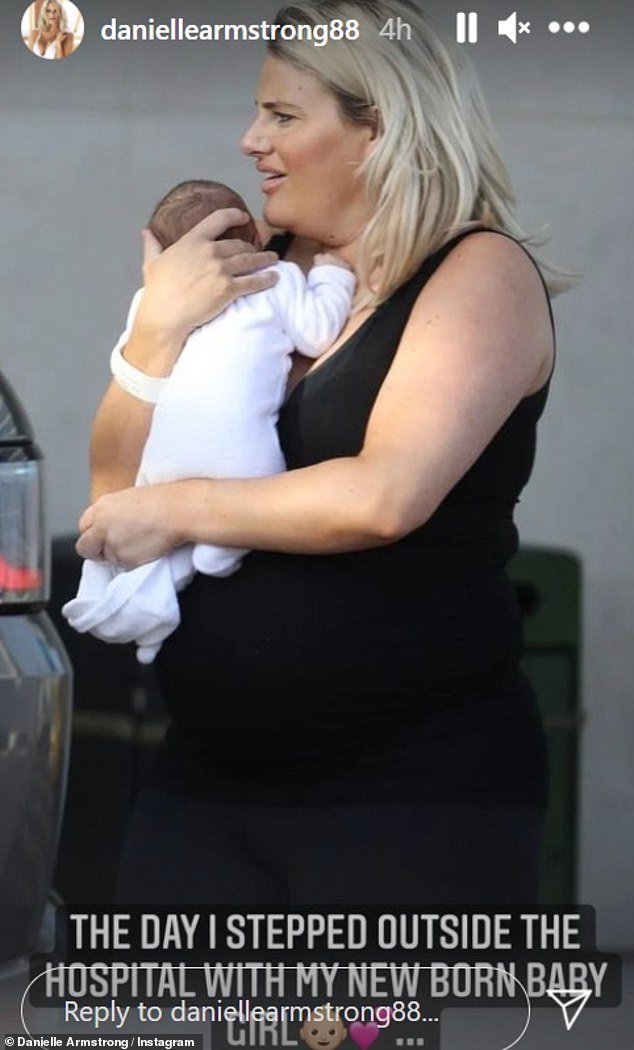 New mum: The reality star, 32, shared a photo of herself taken when she took her daughter home from the hospital to contrast with her jaw-dropping figure today

She wrote: ‘Seven months later and three stone down I’m now doing my first shoot in a bikini as a new mumma and I feel amazing’.

Danielle also wore a gold necklace for the sultry snap while she styled her platinum locks into an updo.

Danielle gained 4st during her pregnancy – and recently shared a clip of herself two weeks post-partum – with the star saying she ‘feels like me’ again after losing weight.

She captioned the clip: ‘The Female Body Is Incredible. 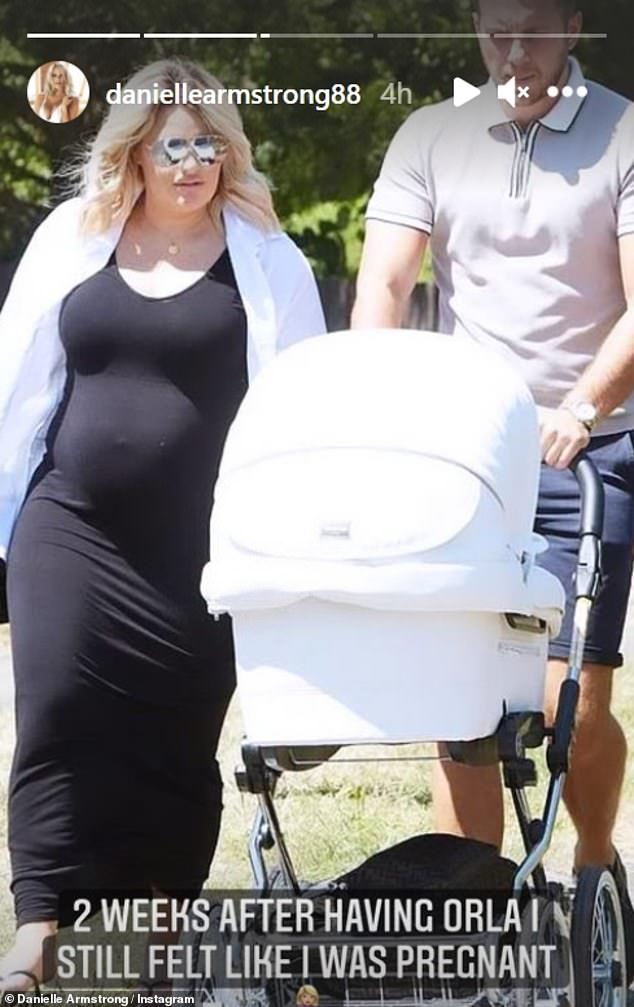 Throwback: She then shared a photo with her fiancé Tom Edney as they took Orla for a stroll shortly after she was born

‘After gaining four stone in my pregnancy I really wanted to show women how your body looks after having a baby as for some women like myself it’s not as easy to snap back in to your post-pregnancy clothes.

‘I decided 6 weeks after having my baby girl I wanted to start feeling like me again and to shift some of the baby weight I gained.

‘I followed a simple nutrition plan and a few workouts from home and the results have been incredible.

‘Six months of following this plan I’ve lost 3 stone, back in my size 10 jeans and feeling happy. Of course I love being a mummy but it’s also important to feel like ME again.’ 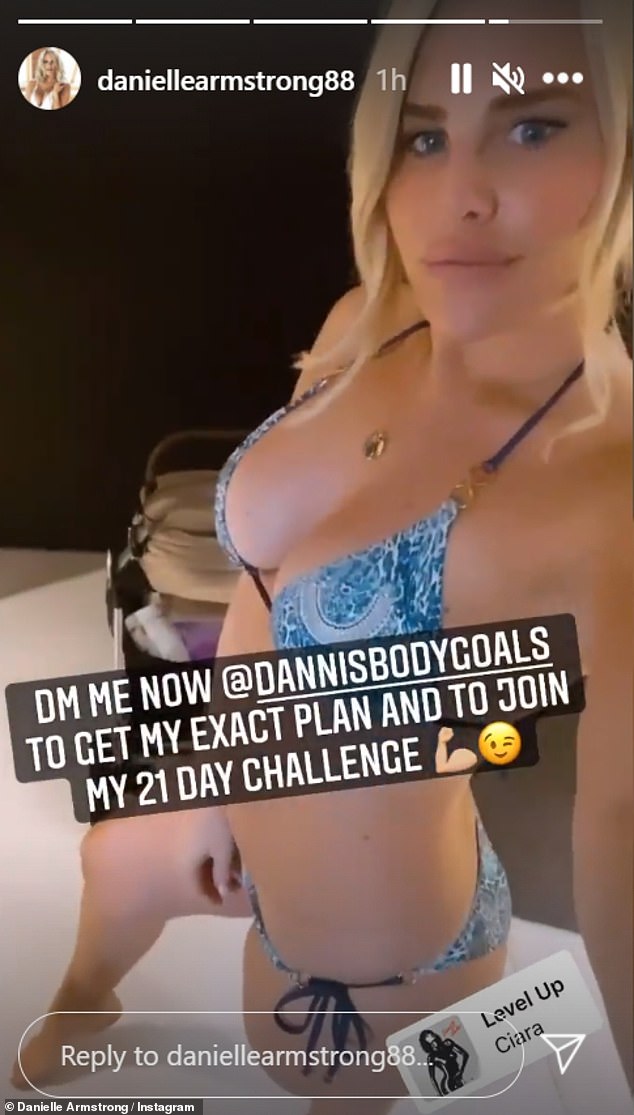 Incredible: The former TOWIE star then posted a snap of herself showcasing her washboard stomach in a blue bikini as she prepared for her photoshoot

In July Danielle openly discussed her ‘tough’ birthing experience after she welcomed an overdue Orla, who weighed 8Ibs 11oz, the previous month.

Speaking to new! magazine, she said: ‘She’s so beautiful. I’m so in love with my little girl, we are totally smitten. [The birth] was tough, but Orla was totally worth it.’

While the stunner has been focused on motherhood, she revealed she has been working hard on her fitness regimen, in an effort to reach her desired shape.

Danielle recently explained that she’s been doing her own 21 day plans to slim down and lose some of the four-stone she put on while pregnant. 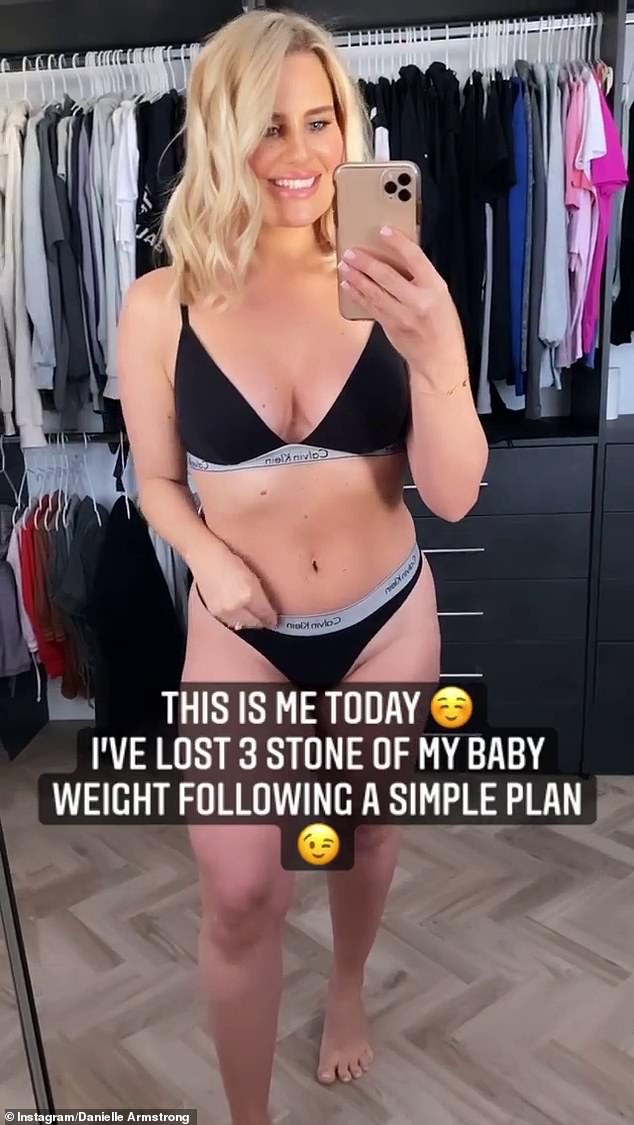 Journey: Danielle posted a video where she showed off her heavily pregnant stomach (L) and her body two weeks after the birth (R)

She told her Instagram followers: ‘I’m really happy with my results, this is my operation transformation results. I started in July and took the other picture tonight.

‘I’m still on my journey, still a bit here [touching her stomach] and my legs always take the longest.. but I’m really proud of myself.’

Danielle also said she was posting Instagram videos that documented her progress in her underwear because she often gets accused of editing her snaps.

She explained: ‘The reason why I’m standing in it is because I always think people are going to think I Photoshop my pictures. I’ve got an insane filter on my face as I’ve got no makeup on but that’s it.’ 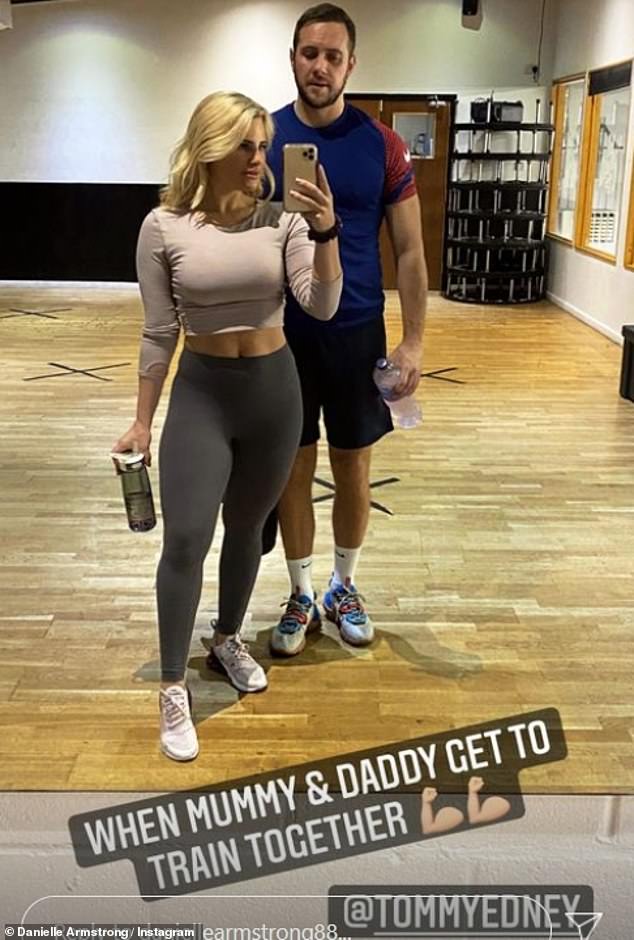 Stunning: Danielle welcomed Orla with fiancé Tommy back in June