She welcomed her first child, a little girl called Orla, with fiancé Tom Edney in May.

And Danielle Armstrong looked sensational as she showed off her post-baby body with some Instagram snaps on Wednesday, after three months of 21 day fitness challenges. 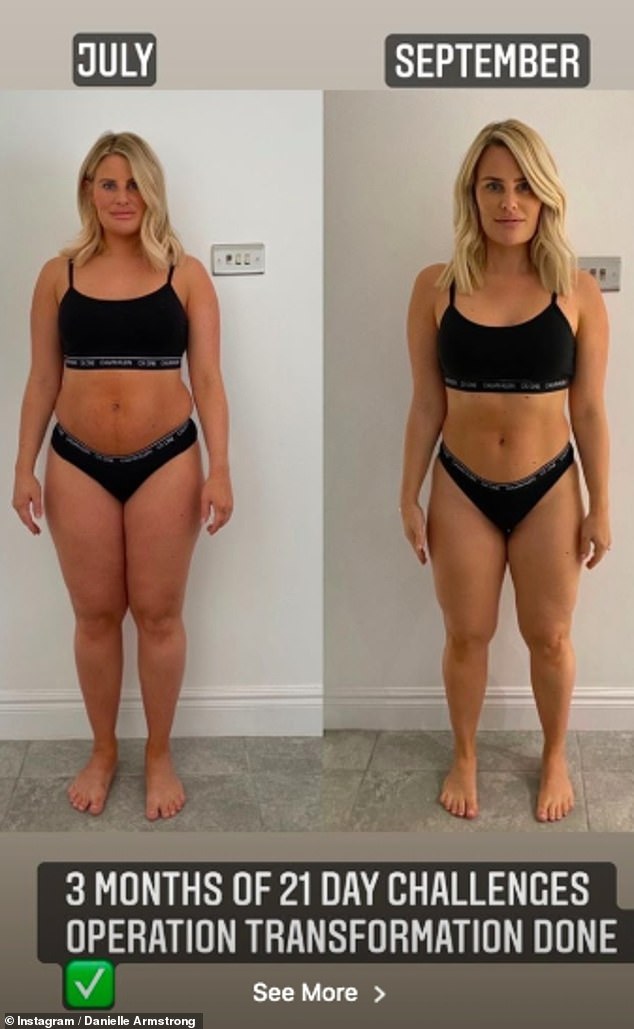 Transformation: Danielle Armstrong looked incredible as she compared before and after snaps of her physique, revealing she started trying to lose some weight in July

Danielle explained that she’s been doing her own 21 day plans to slim down and lose some of the four-stone she put on while pregnant.

Standing in a black sports bra and pants set, she explained how satisfied she felt with her journey so far.

She said: ‘I’m really happy with my results, this is my operation transformation results. I started in July and took the other picture tonight [Wednesday].

‘I’m still on my journey, still a bit here [touching her stomach] and my legs always take the longest.. but I’m really proud of myself.’ 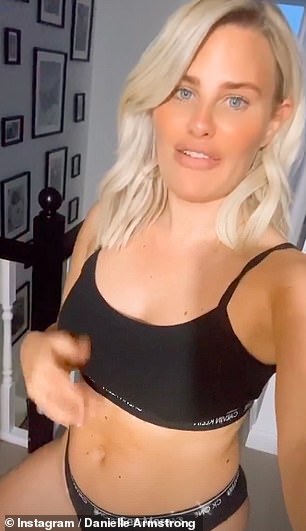 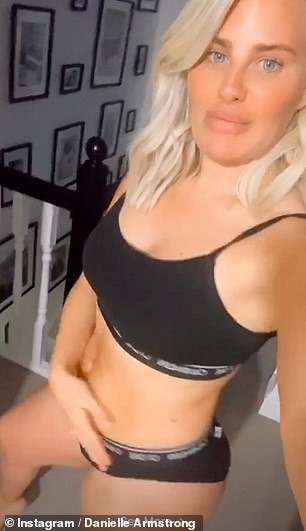 Impressive: The former TOWIE star said that although she’s still ‘on my journey’, she’s ‘really proud of myself’ for the changes to her physique so far 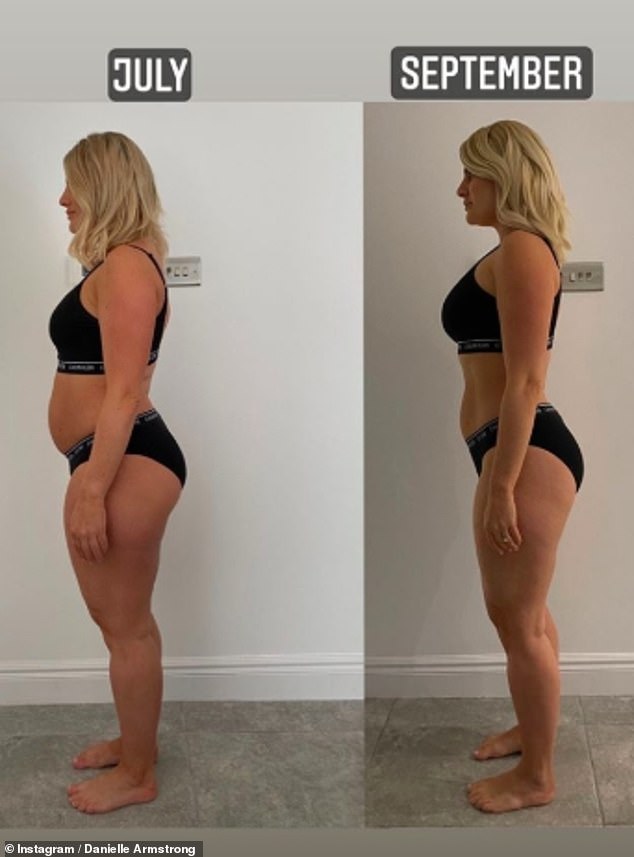 Slim: The mother-of-one explained that the picture on the left was taken in July and the one of the right on Wednesday

Danielle also said she was doing the videos in her underwear because she often gets accused of editing her snaps.

She explained: ‘The reason why I’m standing in it is because I always think people are going to think I Photoshop my pictures. I’ve got an insane filter on my face as I’ve got no makeup on but that’s it.’

The beauty shared three pictures of her transformation, showing her physique from all angles and really proving to followers that she’d managed to toned up her frame.

Danielle looked incredible after just three months of plans which are from her own product range. 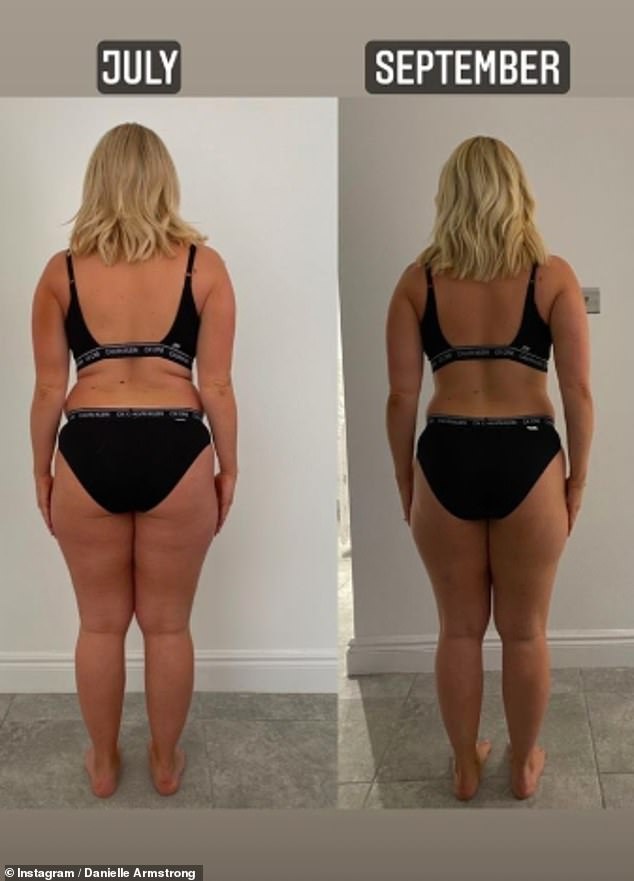 Toned: Danielle has been doing her own 21 day challenges after welcoming her daughter

The star has spoken candidly about her weight in the past with her recently revealing that fat-shaming trolls left her in tears just days after giving birth to baby Orla.

She also slammed juice boot camps and explained how she couldn’t ‘put herself through’ trying to lose her baby weight in six weeks in order to bring out a fitness DVD.

10 days after giving birth to Orla, photographs of Danielle were published online, after which and a sick troll decided to create an anonymous Instagram account just to tell Danielle that she ‘still looked fat and pregnant’.

Describing the impact which the online trolling had on her, Danielle explained that she was left in tears over the comments. 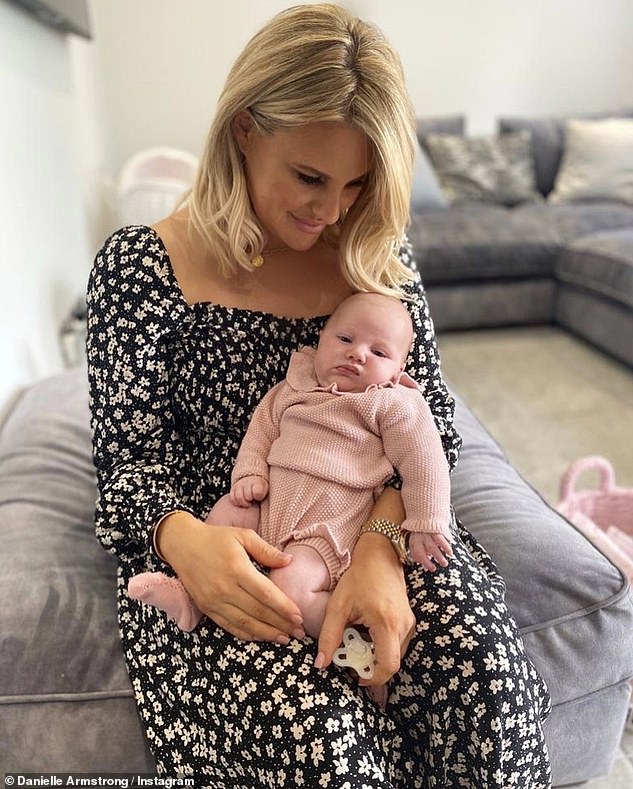 Awful! Danielle, who gained 4 stone during her pregnancy, recently revealed that fat-shaming trolls left her in tears just days after giving birth

She told The Sun: ‘It was horrible and it broke me for a little while. I went from being overjoyed about having my baby girl and everything I’d ever wanted, to suddenly feeling really insecure.’

Danielle explained how fiancé Tom, 32, showers her with love and points out how sad the trolls are, while mum Debbie often takes it upon herself to responds to the vile messages on Instagram.

Of Tom, she said: ‘He always tells me I’m beautiful. He reassures me every day that he fancies me, which is nice because you definitely don’t feel very sexy after having a baby!’

Doing her best to combat the abuse, Danielle has put the words ‘fat’ and ‘ugly’ into Instagram’s filter facility, so that any comment which includes them doesn’t show up,’ although Instagram users can still send DMs. 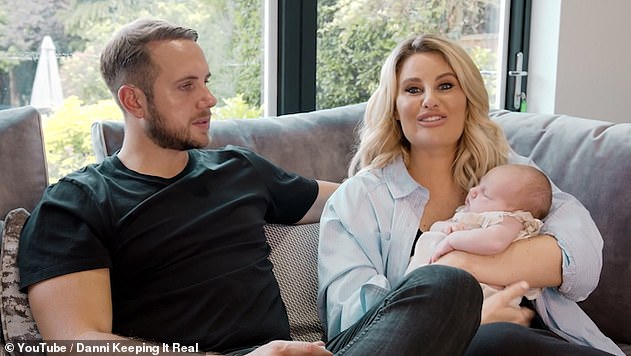 Supportive: Danielle explained how fiancé Tom, 32, showers her with love and points out how sad the trolls are

Discussing her plan to get back into shape, Danielle insisted: ‘For me it’s about doing it my way – the healthy way – and working it around Orla.’

The TOWIE star admitted that – despite doing a 21 day postpartum health regime – it could take her a few months or even a year to get down down to a size 10.

Danielle admitted that during her final trimester she never ‘felt full’ even after gorging on roast dinners, deserts and boxes of Krispy Kreme doughnuts.

After welcoming Orla, Danielle waited six weeks before easing back into a fitness regime and embarking on a nutrition plan.

She added that it’s important that new mums remember what their bodies have just done, and be proud of the fact that they’ve ‘just created this beautiful little miracle.’ 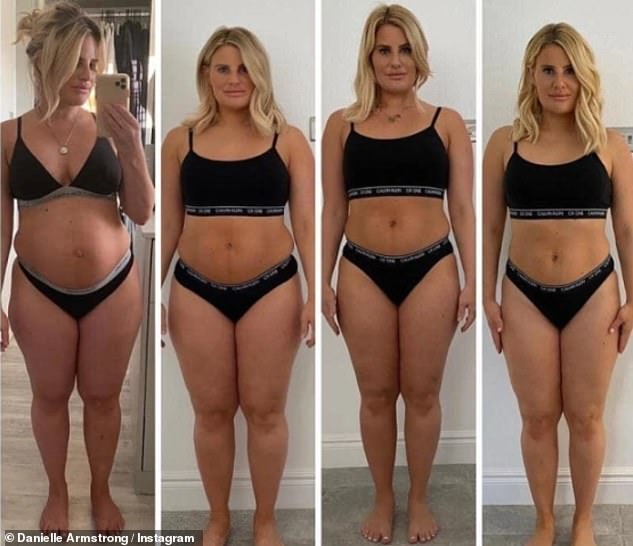