Dancing On Ice 2023: Michelle Heaton becomes 10th star to sign up for hit show – and admits she could ‘never’ have competed during alcoholism

Michelle Heaton has become the latest star to sign up for the new series of Dancing On Ice.

The former Liberty X bandmember, 43, confirmed the exciting news on Monday’s Lorraine as she told the presenter she ‘never’ could have competed in previous years due to damage caused to her body by alcoholism.

She said: ‘I’m so excited, I can’t believe it. Me and the kids are huge fans and we watch every series. I would never have been able to compete because of the way my body is and I’m so grateful I got this this year so I can do it properly. 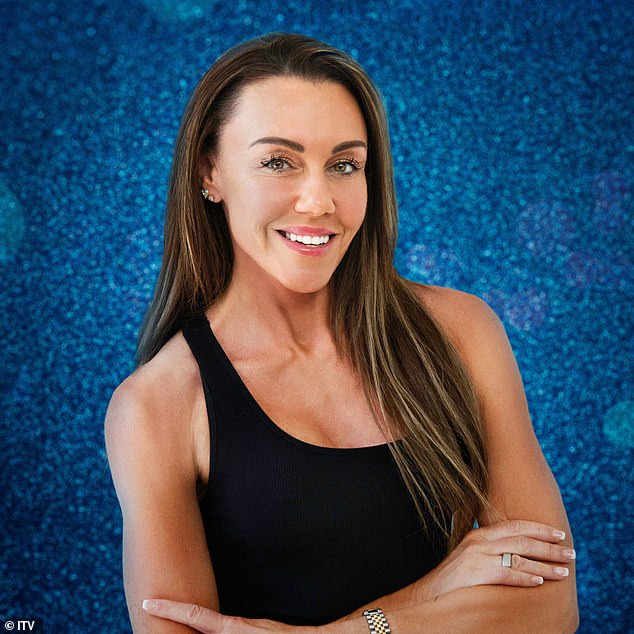 Back on screens: Michelle Heaton has become the latest star to sign up for the new series of Dancing On Ice

‘I have no idea what I’m doing. I’m not a skater. I’ve been on the ice a few times to audition. I get my skates tomorrow.

‘Jessica [Taylor] was fantastic from Liberty X. I told the girls a few weeks ago and she said to enjoy it and be me.

‘We have quite a few gigs coming up and balancing everything with the show, panto and performing.

’18 months sober. I was hear 16 months ago telling my story and I feel so lucky. The colours came back to me. 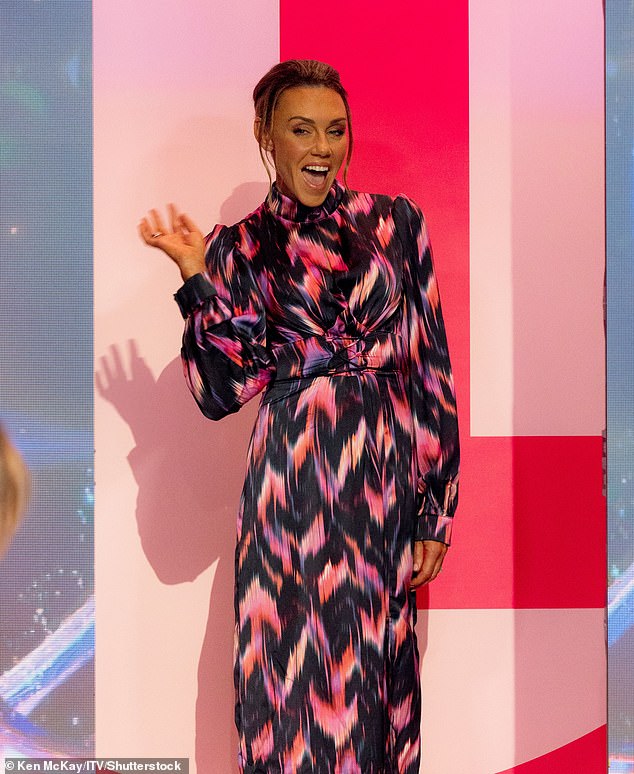 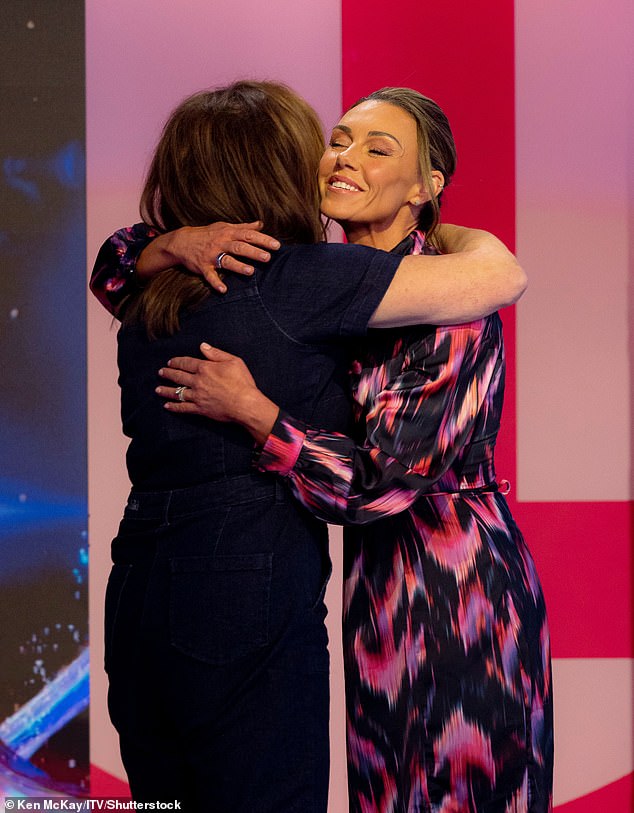 Inspirational: She told the presenter she ‘never’ could have competed in previous years due to damage caused to her body by alcoholism

‘My kids are buzzing, my one said I’m proud of you mummy and it shows strength from where I was to where I am now. It is possible. just one day at a time is how I take it.

‘I told the kids to wear T-shirts there coming every week and there great ages to be a part of it. 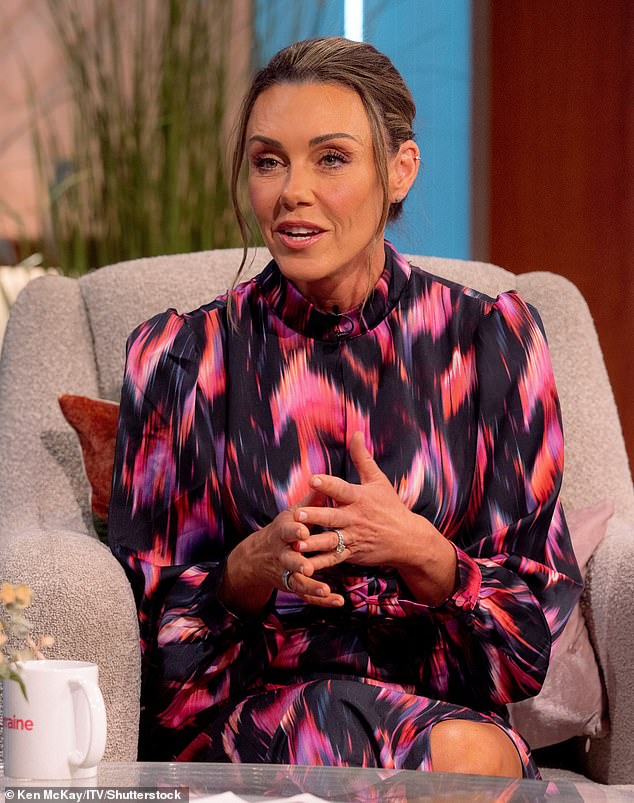 Strong: Michelle told Lorraine: ’18 months sober. I was hear 16 months ago telling my story and I feel so lucky. The colours came back to me’ 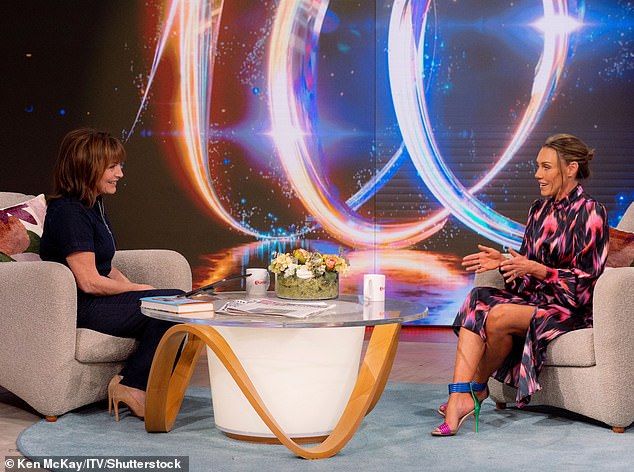 Wow! Inspiration: Michelle told Lorraine: ’18 months sober. I was hear 16 months ago telling my story and I feel so lucky. The colours came back to me’ 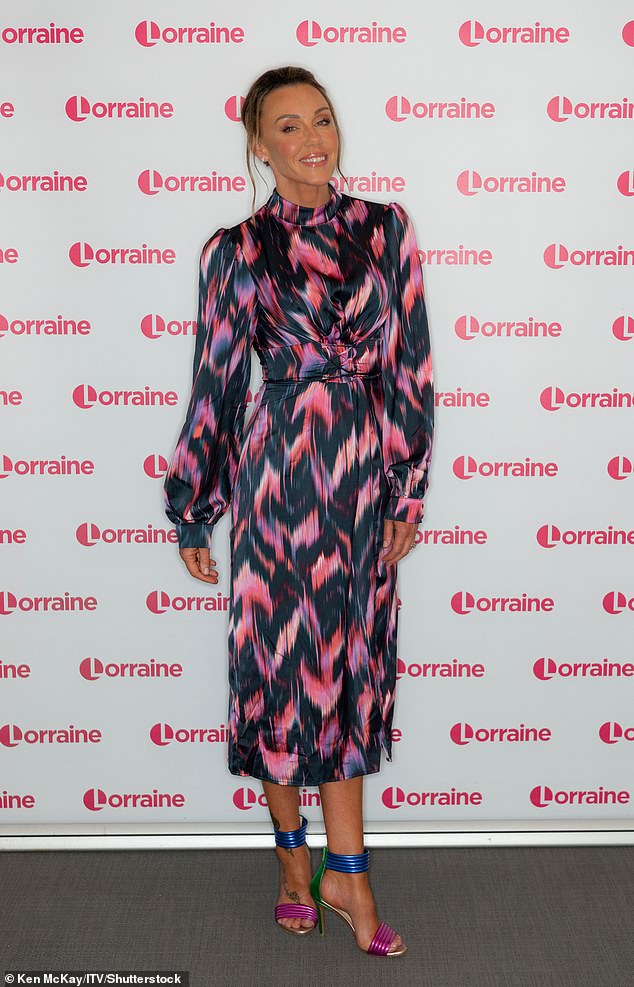 Journey: Michelle said: ’10 years ago I had the double hysterectomy and I remember wanting to be a part of the cancer campaign’

’10 years ago I had the double hysterectomy and I remember wanting to be a part of the cancer campaign. If anyone can get there soon and stop breast cancer it was really important for me to find that out that I had it.

‘Nothing can keep me down. My life has been a real journey and I think what doesn’t break me makes me stronger.’

It follows reports that the move is part of her plan to relaunch her career following her battle with drink and drugs.

The singer is said to have impressed bosses at the ITV show and her signing will be confirmed in the coming days. 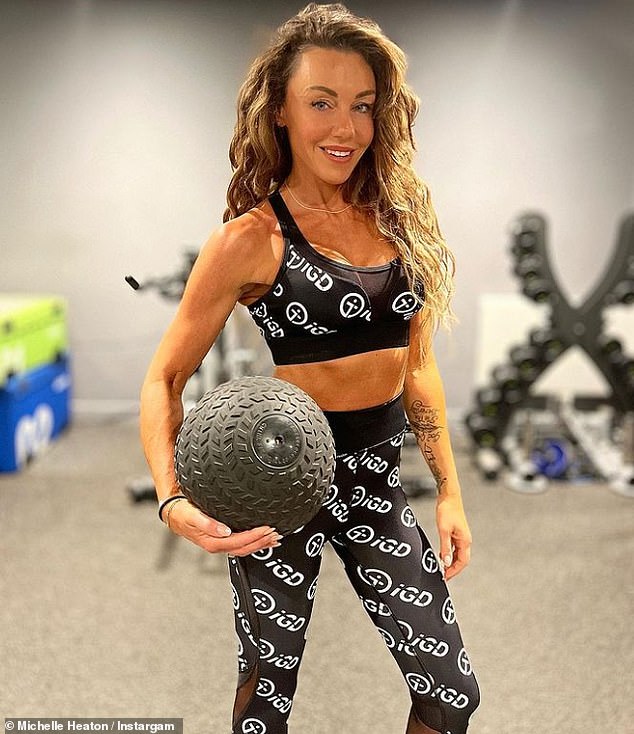 Back on screens: It follows reports that the move is part of her plan to relaunch her career following her battle with drink and drugs

Pals of the Michelle’s told The Sun: ‘Michelle really impressed the Dancing On Ice team and they were delighted to be able to offer her a place on this year’s show.

‘Michelle has been through a lot over the past few years and she has overcome a lot to make it this far.

The insider added that her motivation for taking part is her two children Faith, ten, and AJ, eight.

‘She wants to push herself and make her children proud of her. She is raring to go and cannot wait to get out onto the ice.’ 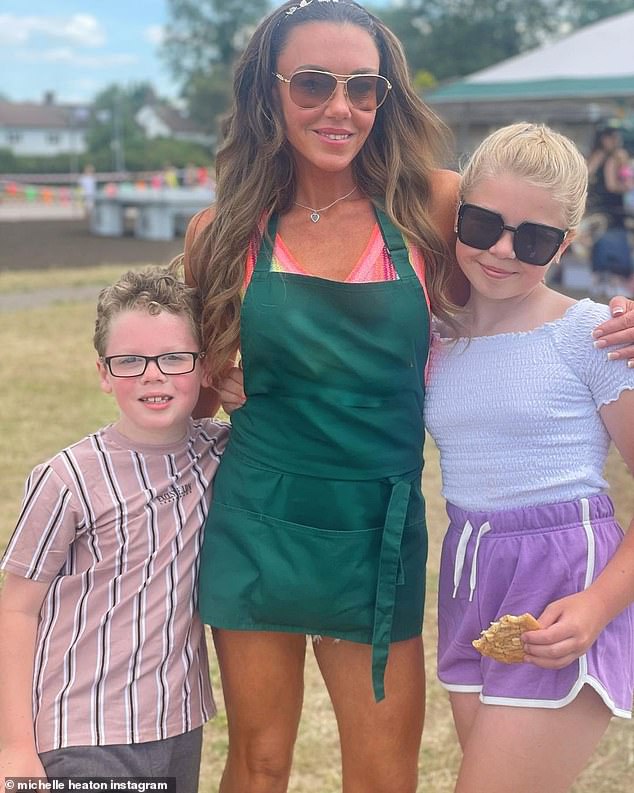 ‘She wants to make them proud’: Friends of the Liberty X singer have revealed that her motivation for taking part is her two children Faith, ten, and AJ, eight 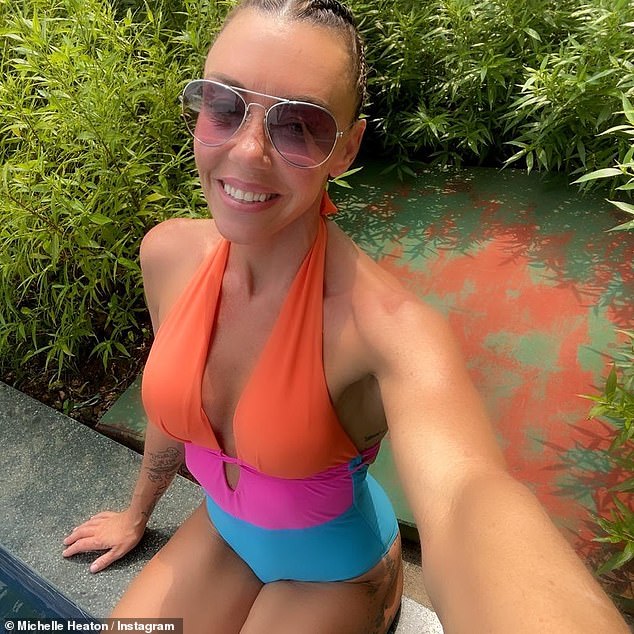 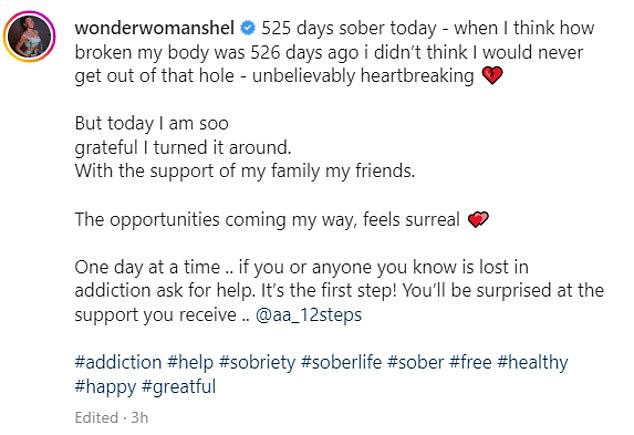 Michelle is already working on another major reality show as it was revealed last week that she is currently filming for the fifth series of Celebrity SAS.

The hit Channel 4 show sees celebrities sign up for a condensed version of the hazardous training course utilized by the United Kingdom Special Forces.

Meanwhile on Dancing On Ice, which will air in January, Michelle will join Love Island favourite Ekin-Su Culculoglu, former footballer John Fashanu and actress Patsy Palmer, who have all been confirmed this week to be taking part. 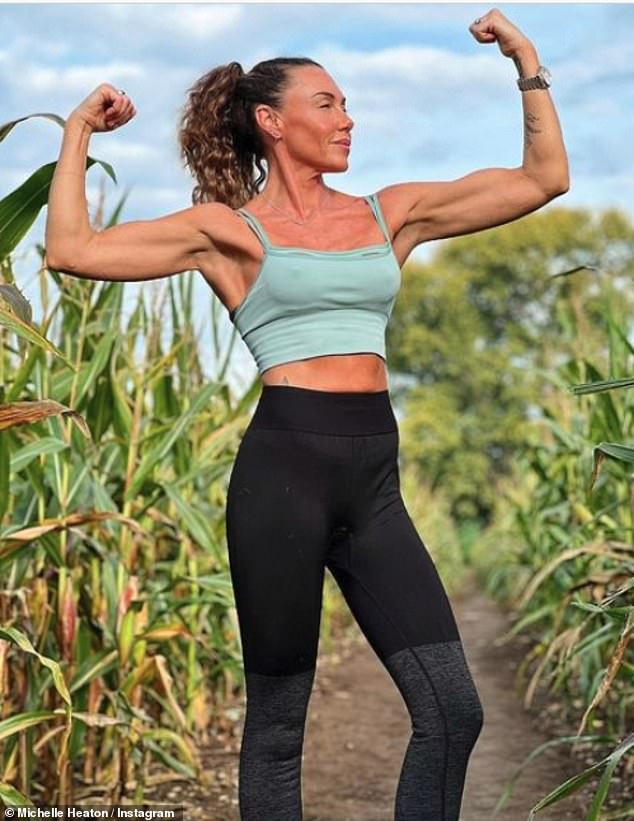 Busy: Michelle is already working on another major reality show as it was revealed last week that she is currently filming for the fifth series of Celebrity SAS

Michelle previously explained she had been offered TV gigs in recent years, however due to drinking she was not ‘in a fit state’ to take part.

The singer said she was not in a healthy place ‘both mentally and physically’ but is now the happiest she has been for a while.

She is celebrating 17 months of sobriety after checking into The Priory in April last year in a bid to beat her alcohol addiction.

Speaking about her four weeks in rehabilitation, Michelle admitted: ‘I was so scared that day but I knew I had nothing left. I was trapped in the four walls of my disease and I had nowhere to turn.’ 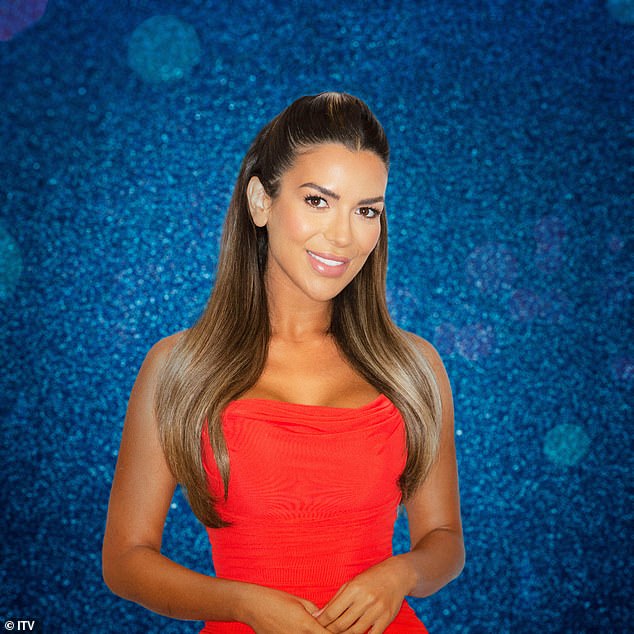 Dancing On Ice 2023: Michelle will join Love Island favourite Ekin-Su Culculoglu, who was confirmed to be taking party in the ITV show this week

Michelle previously revealed she did not go for a day without alcohol for three years before she checked into rehab .

At the height of her ordeal, she was drinking two bottles of wine and a bottle of vodka a day, with things becoming so bad that she felt she ‘wanted to die’.

She’s since kicked her drinking habit after following the 12 Step Programme and regularly attends AA meetings.

While she admits she’s always been a ‘heavy drinker’, the mum-of-two told how she thinks her spiral into alcoholism was possibly sparked by her menopause, stating an ‘internal switch’ happened at the time and she became ‘dependent’ on alcohol.

She underwent a hysterectomy in 2012 and a double mastectomy in 2015, to reduce her risk of cancer, which resulted in her experiencing an early menopause. 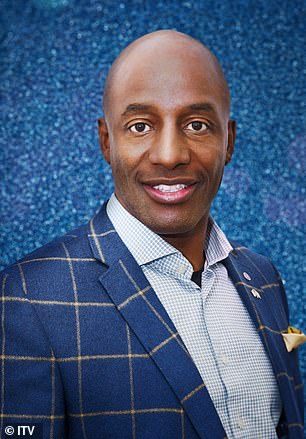 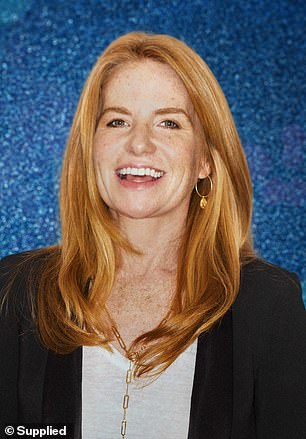 Wow! Football legend John Fashanu was the second celebrity confirmed to be taking to the ice while EastEnders icon Patsy Palmer was the first name revealed earlier this week

DANCING ON ICE 2023: MEET THE CONTESTANTS

WHAT DID THEY SAY?:  ‘I’ve turned it down before because I was terrified, but when I turned 50 I made a pact to get out of my confront zone. ‘

WHAT DID THEY SAY?:  ‘I’ve got some amazing news to tell you. I’m so excited, I can’t wait to get myself on the ice and skate. Stay tuned and see you on the ice.’

WHAT DID THEY SAY?: ‘I’ve not got the best coordination so when people find out they will laugh, but I don’t want to spend my life saying “I can’t do this, I can’t do that.”

WHAT DID THEY SAY?: ‘I’m so excited. I wanted something in my life with structure and it’s more serious than what I usually do.’

WHAT DID THEY SAY?: ‘I’m so excited that I get to learn how to dance…on ice! I’m terrified but can’t wait – I just want to make the most of this whole experience.’

WHAT DID THEY SAY?:  ‘I am definitely in it to win it.And this may be one of the scariest things I’ve ever signed up for but I couldn’t be more ready for the challenge!’

WHAT DID THEY SAY?: ‘I’ve not done much ice-skating but I am so excited for the opportunity. I’m so excited to get into that routine and to feel like an athlete again.’

JAMES LEE WILLIAM AKA THE VIVIENNE

WHAT DID THEY SAY?: ‘To be the first drag artist to take part in one of the big UK reality competition shows is an honour and a big step forward for queer representation on TV.’

WHAT DID THEY SAY?: ‘I’ve got giant feet, I don’t skate and I can’t dance. My family has already made bets – they’re making bets that I’ll fall on the first episode!’

WHAT DID THEY SAY?: ‘I’ve always wanted to do it but I know I would never have been able to complete anything because of the way I was 18 months ago, so I’m really truly grateful that I’ve got it this year when I’m a lot stronger.’