And  Courtney Stodden appears to have given up entirely on  the concept of daytime clothing, instead taking her dog for a walk in her dressing gown and slippers on Saturday.

The 25-year-old reality star was spotted out and about in Los Angeles on Saturday as she soaked up the bright sun while wearing a robe that was loosely tied. 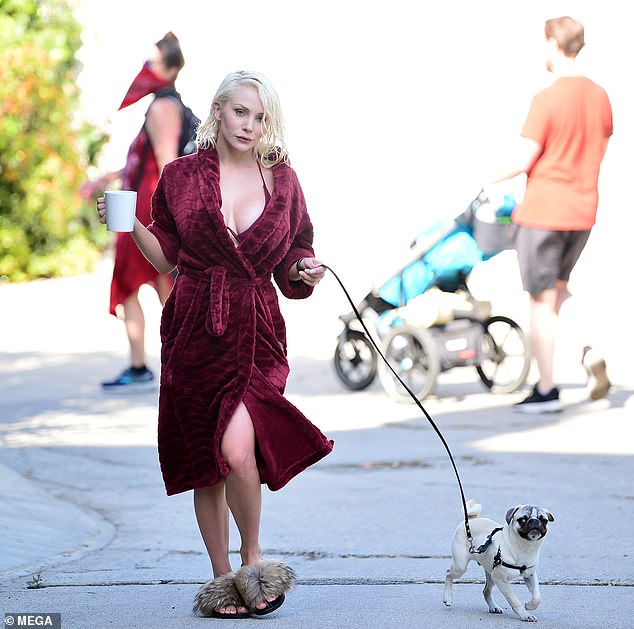 Rise and shine: Courtney Stodden, 25, stepped out on Saturday in Los Angeles for her morning coffee while taking her cut Pug Gucci Gucci for a stroll

She also brought along her cute puppy Gucci Gucci, who looked happy to stretch his legs.

The 5ft3in platinum blonde brought along a white coffee mug for the stroll and sipped it while following her cute pug Gucci. 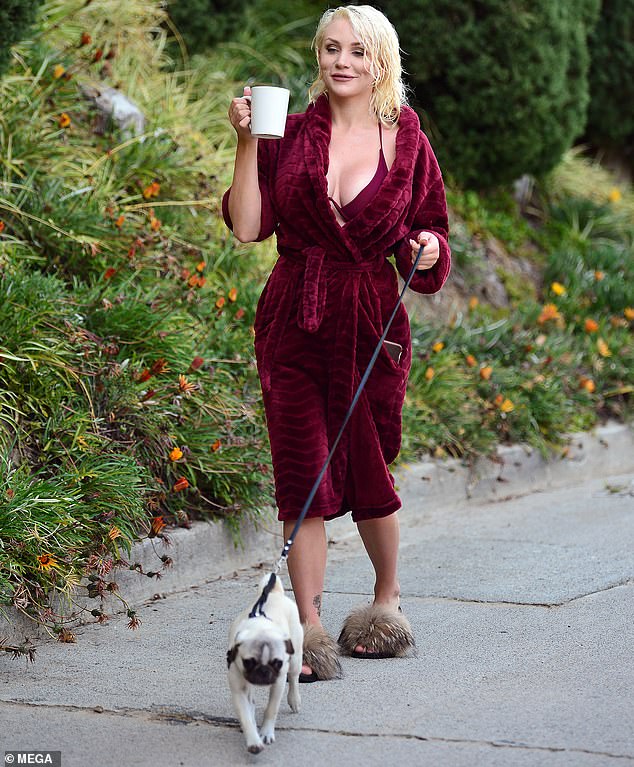 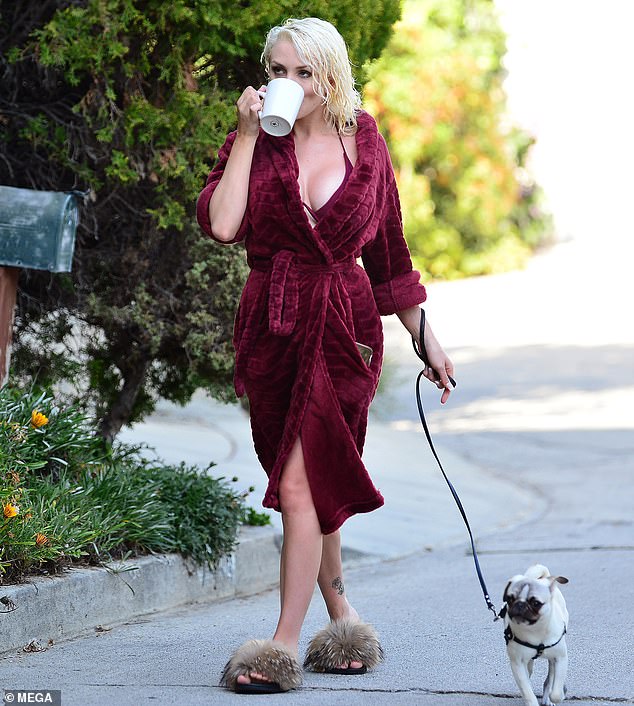 Caffeine blast: The 5ft3in platinum blonde rocked a wet just-out-of-the-shower look and wore a pair of fuzzy brown slippers for the short walk

Though Courtney was stepped out of her home amid the coronavirus pandemic, she was careful to practice social distancing and stayed at least six feet away from others.

On Friday, she shared a closeup photo fixated on her sultry smile while stating the importance of social distancing to slow the spread of the virus.

‘Who else isn’t going out on the town and being a dumb bunny? #stayhomestaysafe #corona.’ 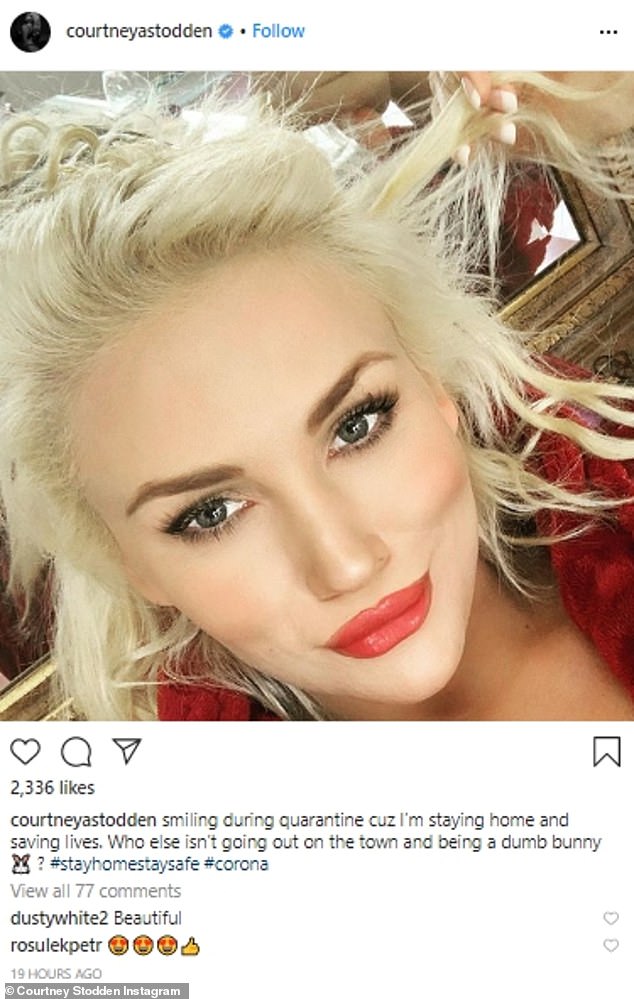 ‘Staying home and saving lives’: On Friday, she shared a closeup photo to Instagram fixated on her sultry smile while stating the importance of social distancing to stop the coronavirus

Courtney has been on her own since finalizing her divorce from actor Doug Hutchison early last month.

Courtney claimed to Fox News last year that the divorce was delayed because of her paperwork errors.

‘This is my first divorce so I was filling out the paperwork all wrong for two years.’ 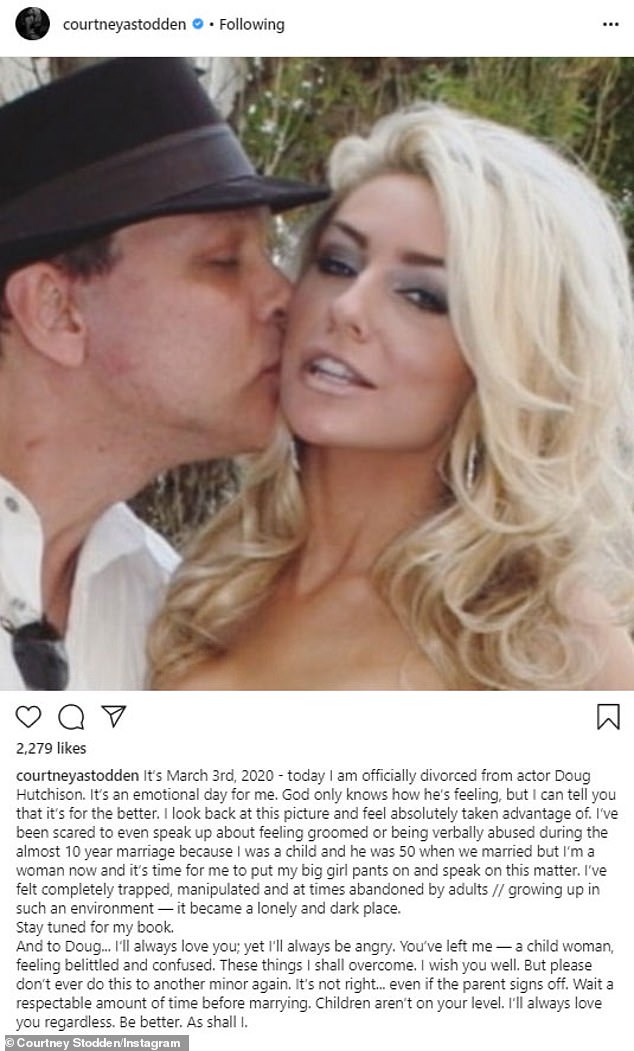 Scandalous: Courtney made her divorce from older actor Doug Hutchison final in early March. The couple married in 2011 when he was 50 and she was only 16