CHRISTOPHER STEVENS reviews last night’s TV: Why Bill Bailey’s the coolest guy to take on a chilly trip to Iceland

The Scots have 421 words for snow. Old dictionaries list flindrikin, which is a slight shower of light flakes, and feefle, which is to swirl, and flukra (fat flakes) and frog (the first smattering) — and that’s just the Fs.

So if the Icelanders have somewhere between 30 and 100 words for wind, as Joe Lycett claimed in his first trip as the new Travel Man, they really aren’t trying hard enough.

Joe struggled with his pronunciation, as he tried to explain the phrases first used by Viking settlers 1,000 years ago to describe squalls, storms and gales, but he couldn’t really get his tongue round them.

That was all right because his guest Bill Bailey wasn’t listening. They could barely hear each other over the gusts. On their first morning, they tried boiling eggs in a hot thermal spring, and ate them with black bread baked in the hot soil. At least, Bill did. The wind blew Joe’s breakfast away. 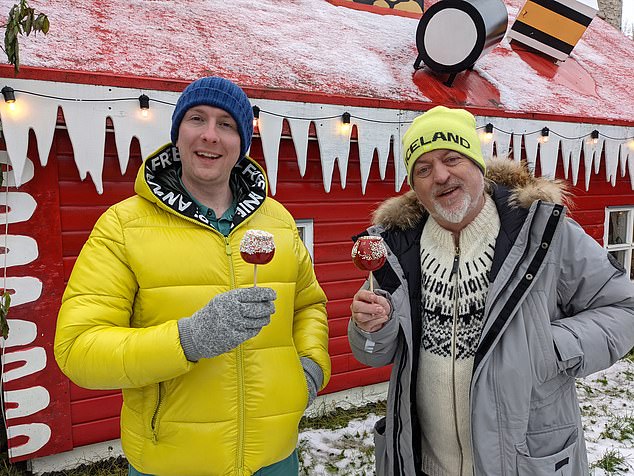 Instead of confining their stay to the capital, Reykjavik, Joe and Bill forayed all over the country, even flying to the far north to step inside the Arctic Circle

Bill fared better throughout the four days of Travel Man: 96 Hours In Iceland (C4). He had the easier job, for a start, because he was simply tagging along.

Joe is taking over the show from Richard Ayoade, who launched the format in 2015 and made 40 episodes, visiting everywhere from Marrakesh to St Petersburg.

Richard’s visits were crammed into 48 hours, which he always regarded as about 47 hours and 30 minutes too long.

The running joke, though it wore wafer thin, was that he hated going anywhere.

An easy way to reboot the series is to double the length of the mini-breaks and let the host roam more widely. Instead of confining their stay to the capital, Reykjavik, Joe and Bill forayed all over the country, even flying to the far north to step inside the Arctic Circle.

But Joe hasn’t yet decided on the tone. Does he mimic the Ayoade ennui? Does he flit everywhere in hyperactive excitement, as he did on The Great British Sewing Bee?

The producers gave him no help. Some of the activities, such as dog sledding, were magnificent fun and others looked pathetic. Bill summed up the underwhelming earthquake simulator at a shopping centre: ‘Well, that was £1.69 worth of entertainment.’

Joe is at his funniest when he’s stupidly happy. His best bet as Travel Man is to find excursions and experiences that he loves. No one wants to see him moaning and sulking. Richard Ayoade did that so much better than he ever could.

Joe might consider taking Bill with him everywhere, though. Ever charming, self-deprecating, full of songs and repartee, the former Strictly champion is becoming telly royalty. Whatever he does is entertaining.

The mere mention of ‘Bill’ brings FBI Special Agent Starling out in a cold sweat, in Clarice (Alibi), a formulaic spin-off from The Silence Of The Lambs.

‘Bill’ was a serial killer who designed outfits made from the skins of his victims. You won’t see that as a fancy dress challenge on the Sewing Bee. Now our heroine (Rebecca Breeds) is in demand to catch all serial killers in America.

‘You are a woman with a very public reputation for hunting monsters, Clarice,’ says the attorney general, whose own daughter nearly ended up as one of Bill’s dress patterns.

The corpses with their festering wounds are presented in obscene detail — always female, always naked, of course.

The dialogue is equally revolting. ‘Let’s set her free,’ Clarice murmurs, as she and her partner find yet another body, this one stuck in a grating. This show is one old friend you won’t want to have for dinner again.

Original and best of the day: The new West Side Story has proved such a flop that some say it spells the end of Hollywood remakes. Far better to enjoy Natalie Wood in the 1961 film, on BBC2, and a celebration of the great Stephen Sondheim (BBC4).