The Netflix villainess, 33, told fans to enjoy the show’s ‘5,000 fake storylines’ in a tweet posted to her account 34 minutes before season five was set to drop on the streamer.

’30 minutes till the launch of #SellingSunset,’ she posted on Thursday night. ‘Enjoy the new season and all of it’s 5,000 fake storylines!’ 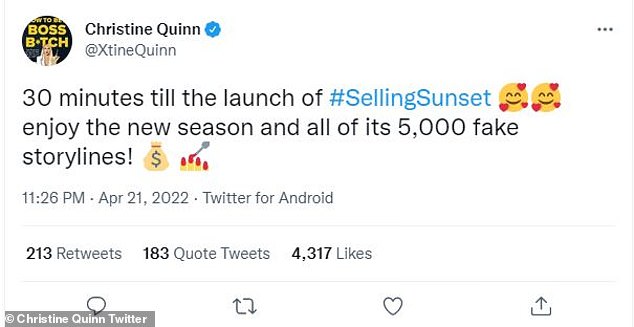 She did not specify what exactly was real or fake on the newest season but ended her tweet with a money bag and nail painting emoji.

However, according to a source speaking with Page Six, the allegedly fake storyline concerns a ‘$5,000 bribe’ fellow Selling Sunset realtor Emma Hernan claims Christine offered in order to steal one of her clients.

Season five of Selling Sunset debuted on Netflix on April 22 and the stars teased the drama to come in a cover shoot for Netflix’s companion site Tudum.

The covers showed the ‘real estate baegents’ glammed up from head to toe and  enjoying the finer things in life in the Barbie themed shoot. 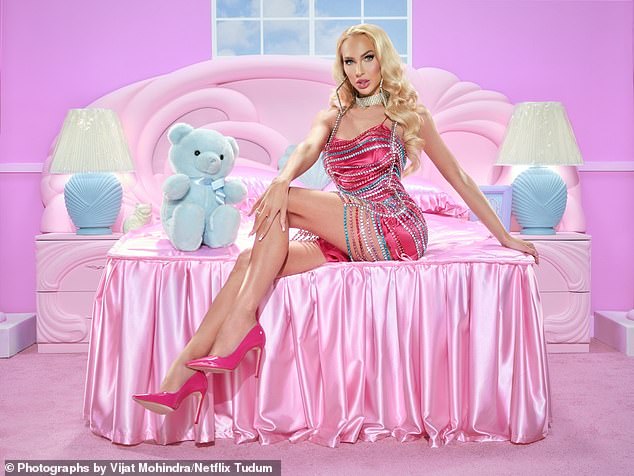 Raising eyebrows: She did not specify what exactly was real or fake on the newest season but ended her tweet with a money bag and nail painting emoji 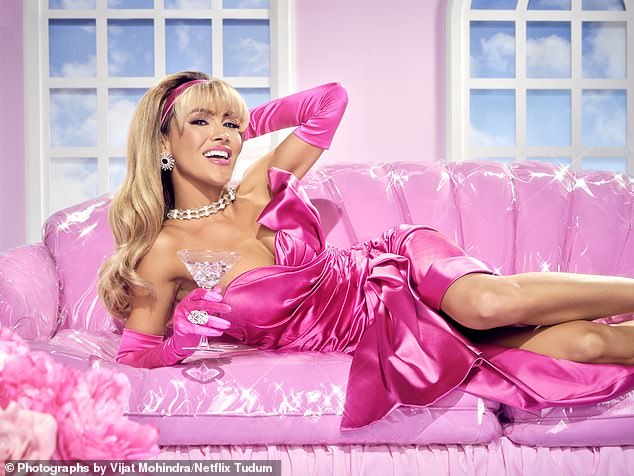 All dolled up! The leading ladies of Selling Sunset were living it up in Barbie’s dreamhouse as they posed up a storm for Tudum’s first digital cover

In the shoot, fan favorite Chrishell Stause wore a hot pink satin mini dress with long gloves as she clutched a martini glass and reclined on a plastic-wrapped sofa.

And Christine was all dolled up in a glittering mini dress and hot pink heels as she struck a pose on a girly bed decked out in pink.

One of the covers showed Heather Rae Young flashing her abs in a shimmering pink outfit as she floated about the pool while lowering her heart-shaped shades.

Amanza Smith kicked back sipping a drink while Davina Potratz rocked a feathered mini skirt and carried a tray of beverages.

In another shot, Chrishell raised her glass as she hung out with her glammed up co-stars/colleagues, Mary Fitzgerald and Emma Hernan. 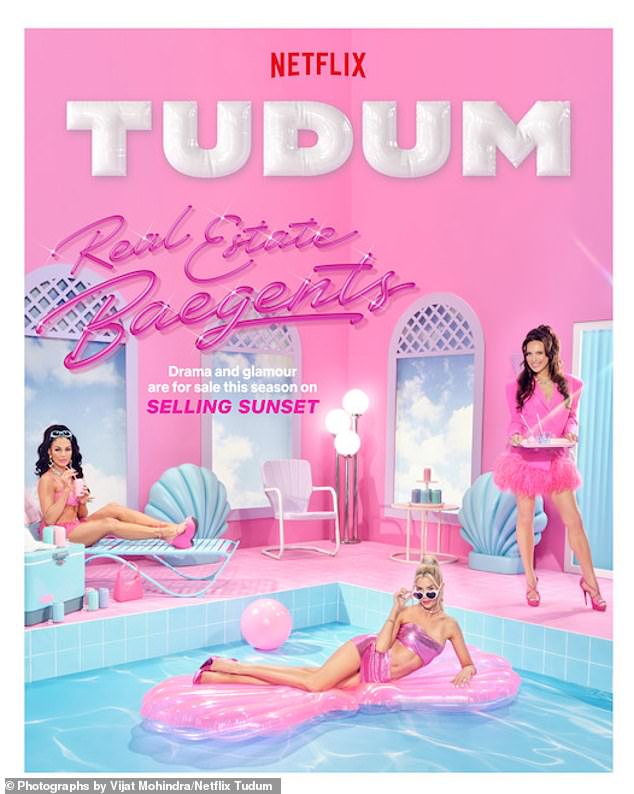 Christine and her new pal, Chelsea Lazkani, who is the latest real estate agent to join the show, also got the cover treatment as they kicked back on the pink bed.

Maya Vander and Vanessa Villela turned up temperatures while posing in a retro-style bathroom.

Maya wore a pink towel dress as she blew dry her hair while Vanessa sported a pink romper and matching heels. 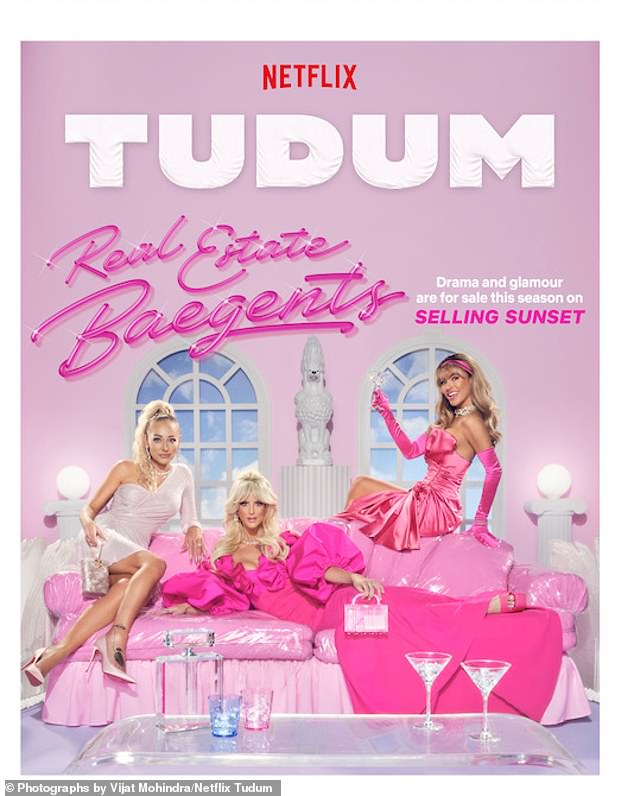 Working it! Chrishell raised her glass as she joined forces with Emma Hernan and Mary Fitzgerald 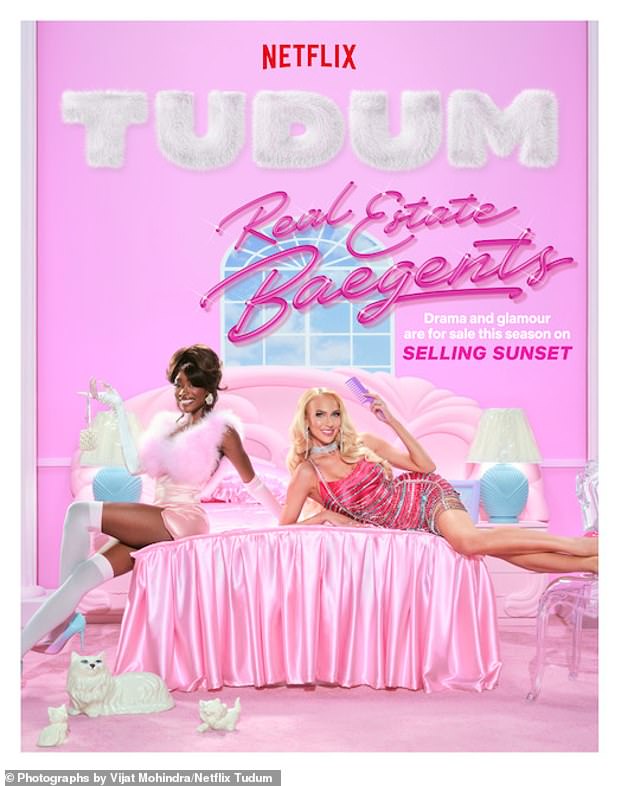 In the Tudum article, the women dished on what fans can expect from the next season of Selling Sunset.

In no surprise to fans, the Christine drama continues.

Without naming names, Chrishell tells the site: ‘It’s true that we don’t all get along. It is really hard if you’re being given an energy from someone. There are always times I wish I could have been better, but it’s difficult to support someone toxic.’ 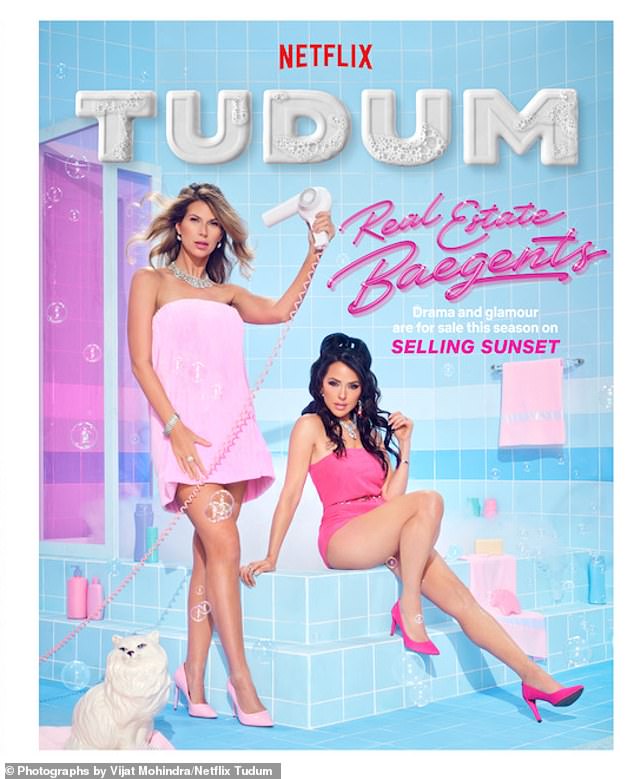 Blown away! Maya Vander and Vanessa Villela turned up temperatures while posing in a retro-style bathroom 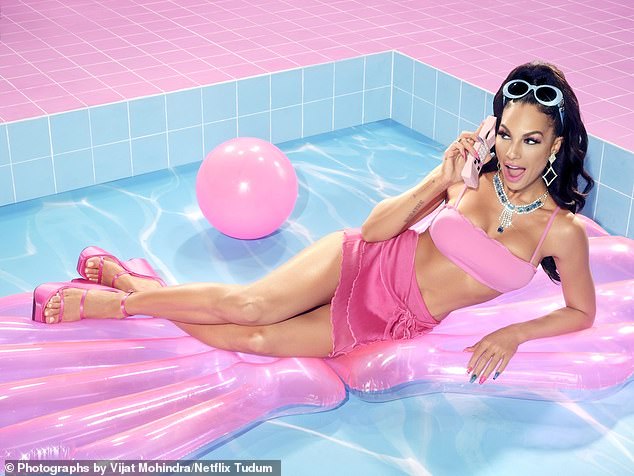 On the line! Amanza chatted on her baby pink phone as she floated in the pool

‘I think the hardest thing is you’re seen one way, and then people don’t realize that you have feelings. People make mistakes and it’s OK.’

According to Tudum, newcomer Chelsea, who bonds with Christine in the premiere episode, used the words ‘bully’ and ‘mean girls’ to characterize the behavior of the other women in the office.

‘The type of person I am and where my value system lies, I really just call things out how I see them, and I didn’t take into account prior behavior,’ Chelsea told the site.

She revealed the stars staged a ‘care-frontation’ to warn her – in a kind manner – of the perils of associating with Christine. 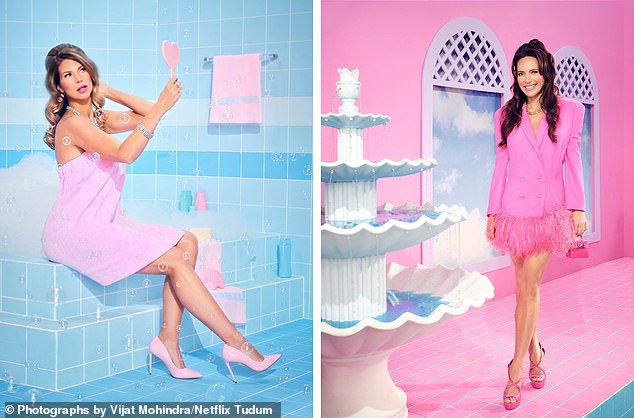 Mirror, mirror! Maya gazed at her reflection as Davina turned heads in a feathered mini skirt 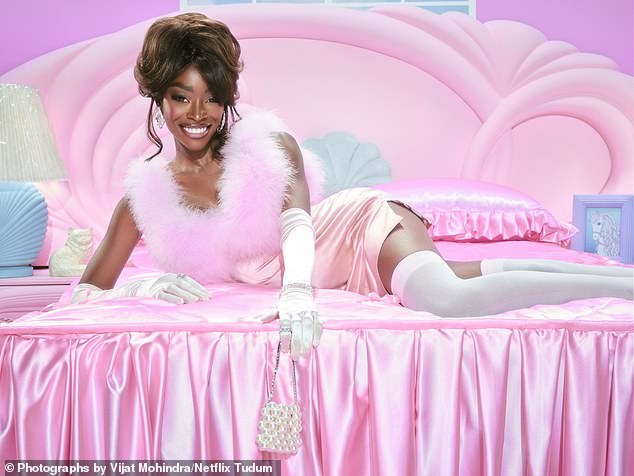 Going glam! Newcomer Chelsea rocked a furry pink top as she lounged about the satin bed 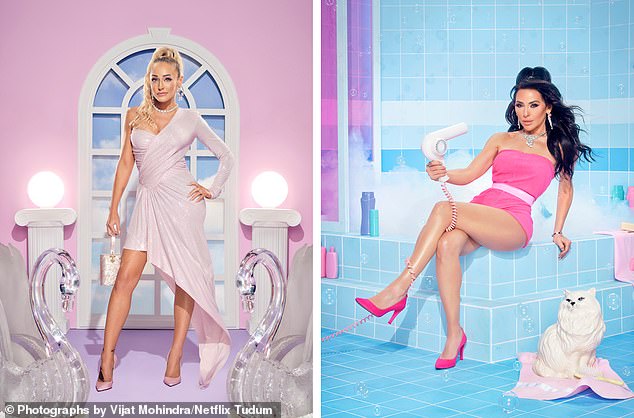 Back for more: Season five of Selling Sunset will premiere on Netflix on April 22

‘I hate that we’re being portrayed as mean girls this season,’ Heather Rae Young told the site. ‘There’s a reason why we choose not to have someone in our lives. There’s one person all of us girls have an issue with.’

Emma insisted they were anything but ‘mean girls’: ‘These people are the opposite of mean girls. These are the most supportive girls to me, personally. I struggled in high school and coming into this group has been the biggest breath of fresh air.’

The Christine drama won’t be the only story unfolding – so will the office romance between Chrishell and her boss Jason Oppenheim.

While they have since split, Chrishell admits she is not exactly looking forward to watching it play out on small screens.

‘Knowing it’s coming, I almost just want to rip it off like a Band-Aid,’ Chrishell says.

‘We are going to have a laugh about it, a cry about it, take a minute, take a breath, regroup.’ 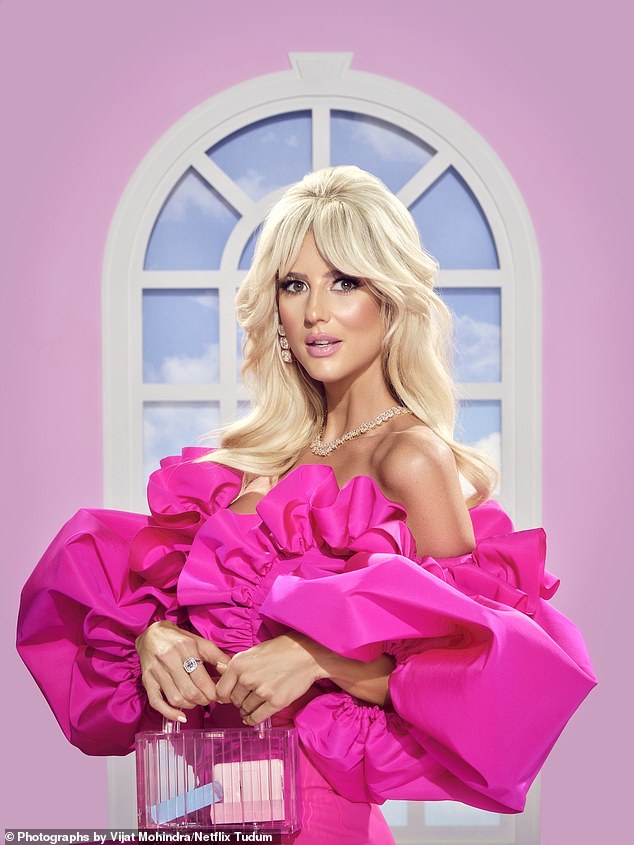 You can sit with us! ‘These people are the opposite of mean girls’ Emma said. ‘These are the most supportive girls to me, personally. I struggled in high school and coming into this group has been the biggest breath of fresh air.’