Christine Quinn was all legs in a flirty pink tweed mini dress on Sunday.

The Selling Sunset villain, 33, worked a bow slit mini dress by Area with an embellished collar which attached to her wrist.

Despite being center of drama amongst her castmates, Christine didn’t seem bothered as she shot a secret project in Los Angeles. 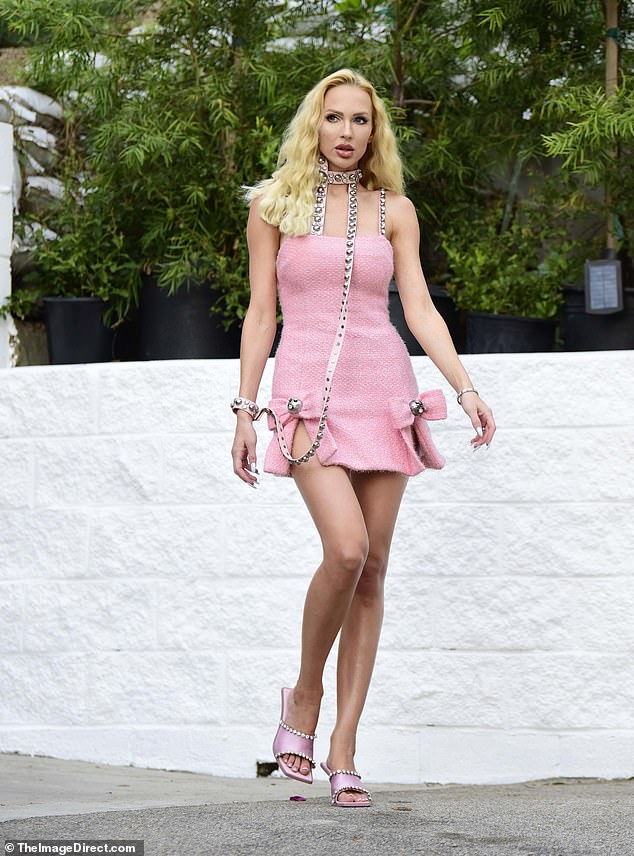 Pink lady! Christine Quinn batted off the drama as she shot a secret project in Los Angeles wearing a pink tweed mini dress

The blonde beauty put her fabulous post-baby body on display in the pretty pink number which accentuated her trim waist and toned arms.

She teamed the dress with a matching pair of satin pink heels embellished with jewels.

Her hair was styled into loose crimped waves with a chic side part and her face shone with lip gloss and long lashes.

Christine showed more angles of her sexy look to her Instagram account, where she looked every inch the fashionista striking poses in her trendy look. 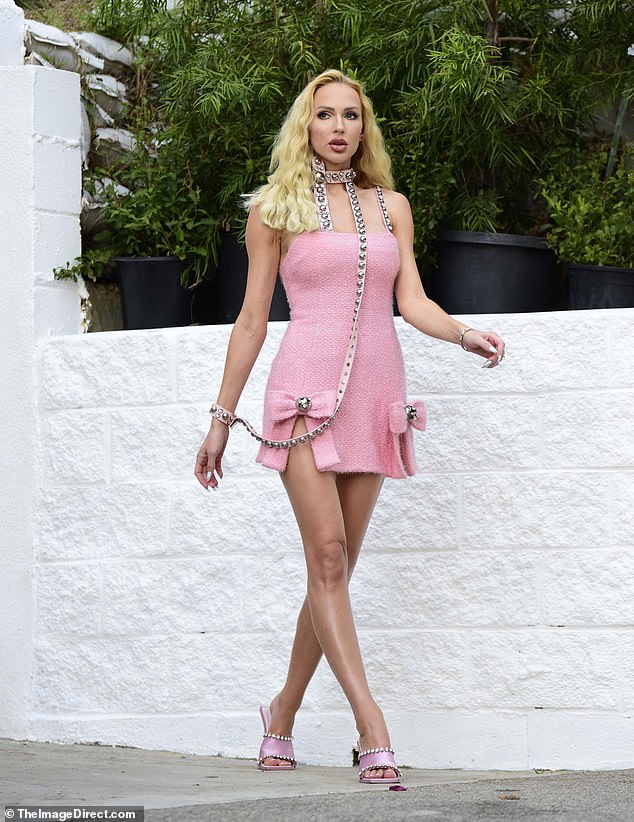 If you’ve got it! The blonde beauty put her fabulous post-baby body on display in the pretty pink number which accentuated her trim waist and toned arms

‘I pink I’m in love with this new @area collection,’ she captioned the shots.

While Christine may love rocking the latest trends on and off camera, her top priority remains being a mother to nearly seven-month-old son Christian, whom she shares with husband Christian Richard.

The luxury real estate agent posted heart-melting video of her kissing and fawning over her ‘big boy’ on her Instagram Stories. 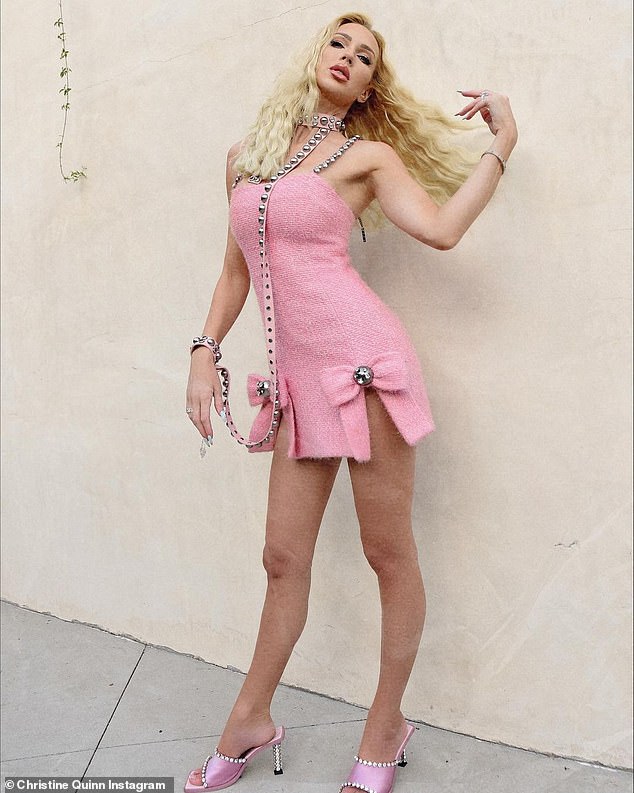 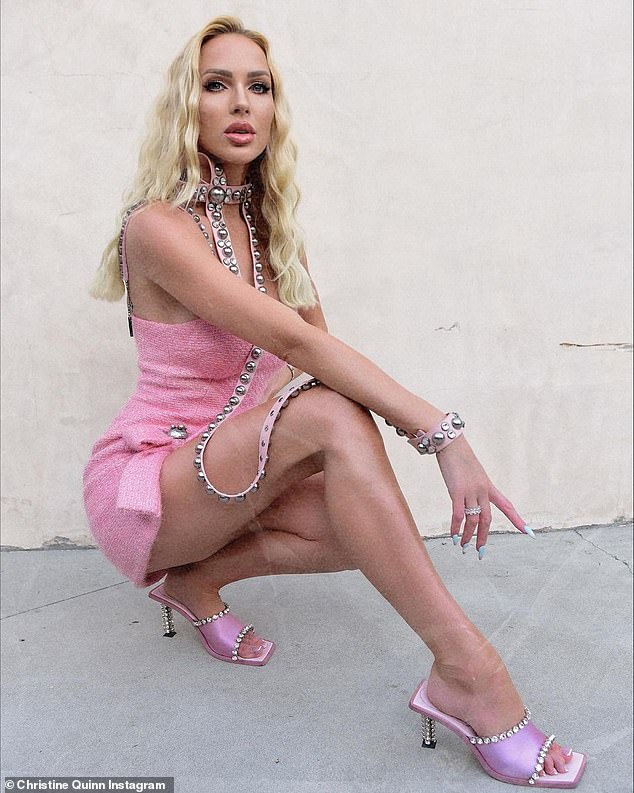 Outside of her blissful life as a parent, however, Christine has been enmeshed in drama with her Selling Sunset co-stars, including Chrishell Stause.

In a recent interview with Vulture, Chrishell claimed she threatened Christine with legal action after Quinn allegedly attempted to ‘plant a false story’ about Stause during her divorce from Justin Hartley.

During the season finale of the show, Chrishell accused Christine of attempting to ruin her life – and the actress went into detail into the allegations during her interview. 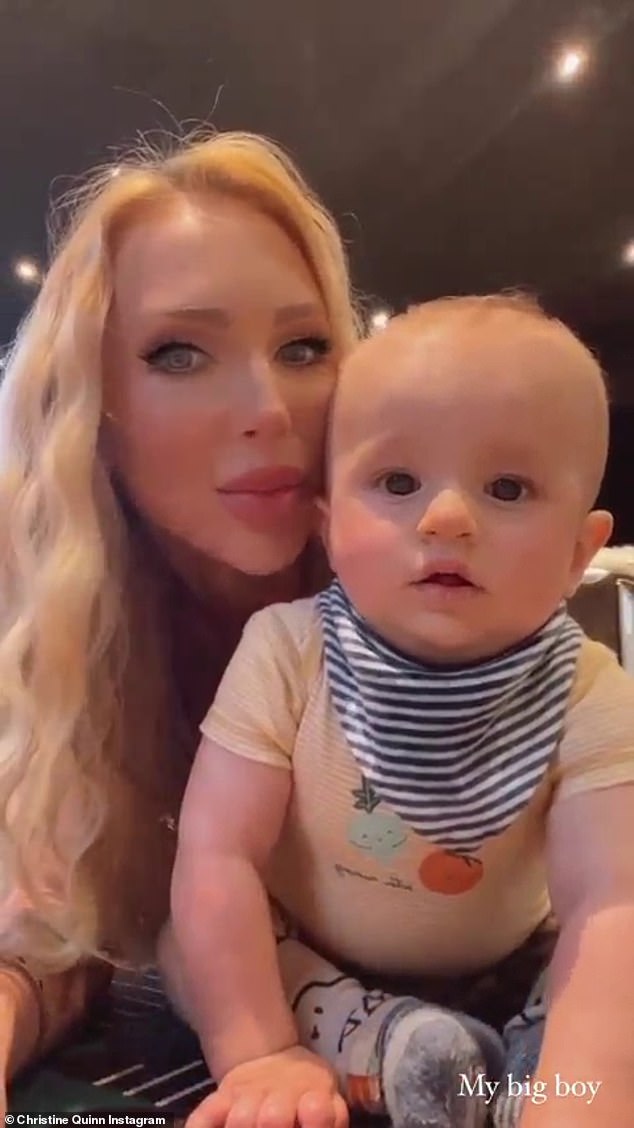 That’s her boy! Christine doted on her seven-month-old son Christian on her Instagram Stories 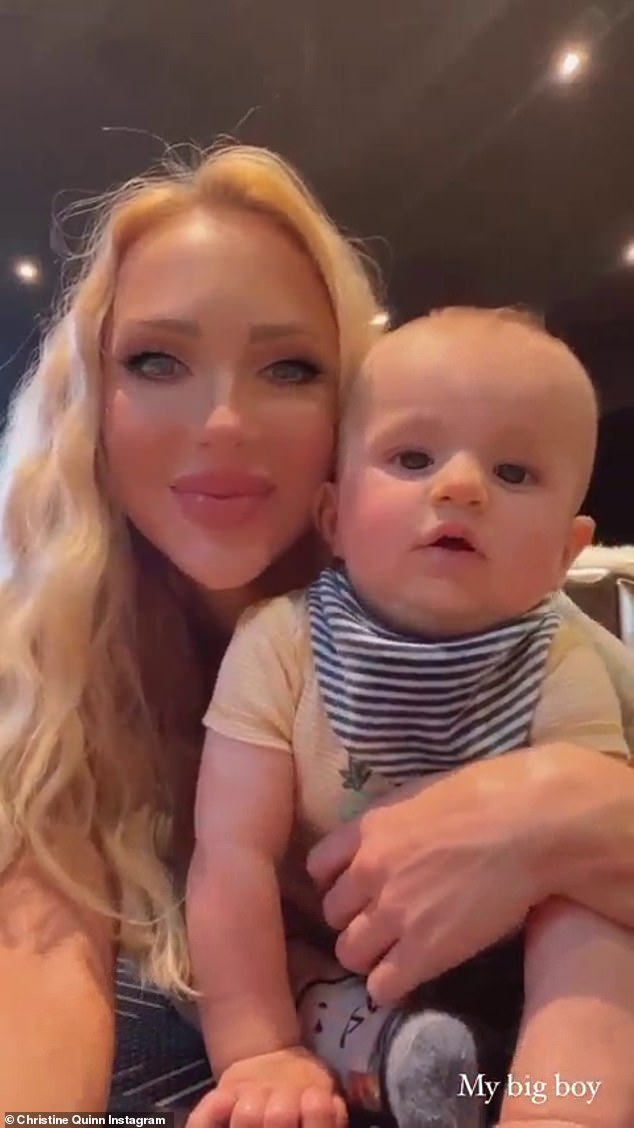 ‘In the finale, you were talking about her trying to ruin your life. In that moment, what were you thinking of specifically? Emotions were running so high, but I felt like I was missing part of the story,’ the interviewer asked.

‘Unfortunately, with our show, when things happen in the press sometimes, they don’t want to break the fourth wall and we can’t say things clearly. I felt that way when I watched as well,’ Chrishell responded.

‘I’d rather just be honest and tell you: She tried to plant a false story when I was going through my divorce and I had to have both sides confirm that it wasn’t true and then threaten legal action. And this was right after my mom died. It was a lot on my plate and kicking someone while they’re down and trying to spread a rumor that I was hooking up with someone. Both parties knew that is not what happened.’

‘They had to pull it, but to try and even put that out there at a time where everybody was wondering what happened and I lost my mom — to me that’s so below the belt. I had to spend thousands of dollars in legal fees and this isn’t the first time I dealt with something on this level.

‘She did it again recently, trying to say that me and Jason were happening before, and it’s just not true. You can understand how that really could take someone down and ruin them when everyone on the internet is trying to figure out what happened. She takes it as an opportunity to fill in some blanks that were blatantly untrue. It was many steps too far for me.’ 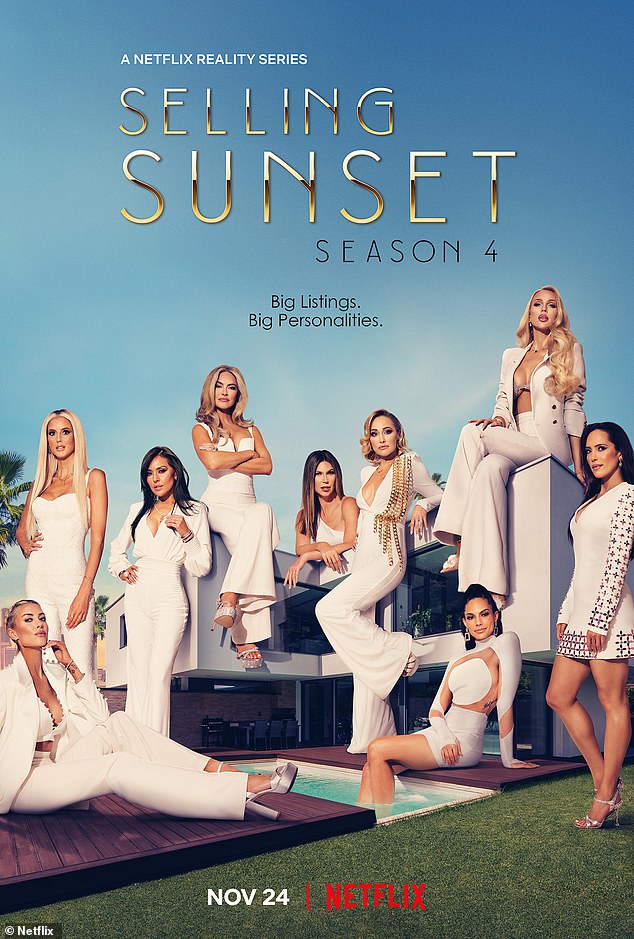 Starting a buzz: Outside of her blissful life as a parent, however, Christine has been enmeshed in drama with her Selling Sunset co-stars, including Chrishell Stause