EXCLUSIVE: Christina Haack fuels speculation she is engaged to Joshua Hall as she wears a huge diamond ring while frolicking on the beach in Cabo

Christina Haack further fueled rumors that she is engaged to Joshua Hall while celebrating her new boyfriend’s birthday at the Montage in Mexico.

On Sunday, the 38-year-old Flip Or Flop star was spotted wearing a massive diamond ring on her wedding finger as she frolicked on the beach with Hall in Cabo San Lucas.

This sighting comes just before the siren shared an image to Instagram with her arms around her boyfriend. She seems to be wearing the same engagement ring as she had on when she took a dip in the ocean. The reality TV star added a lock and key emojis in her caption that made it seem she was locked down for marriage. 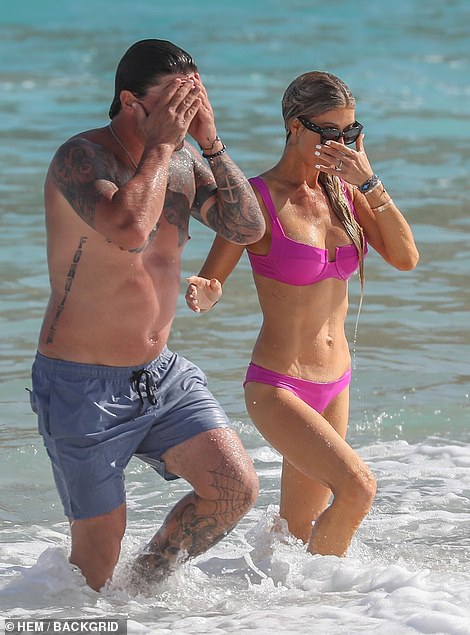 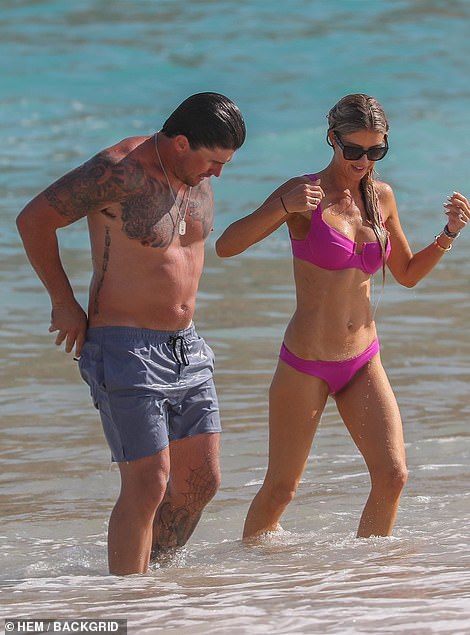 A new ring! Christina Haack further fueled rumors that she is engaged to Joshua Hall while celebrating her new boyfriend’s birthday in Mexico 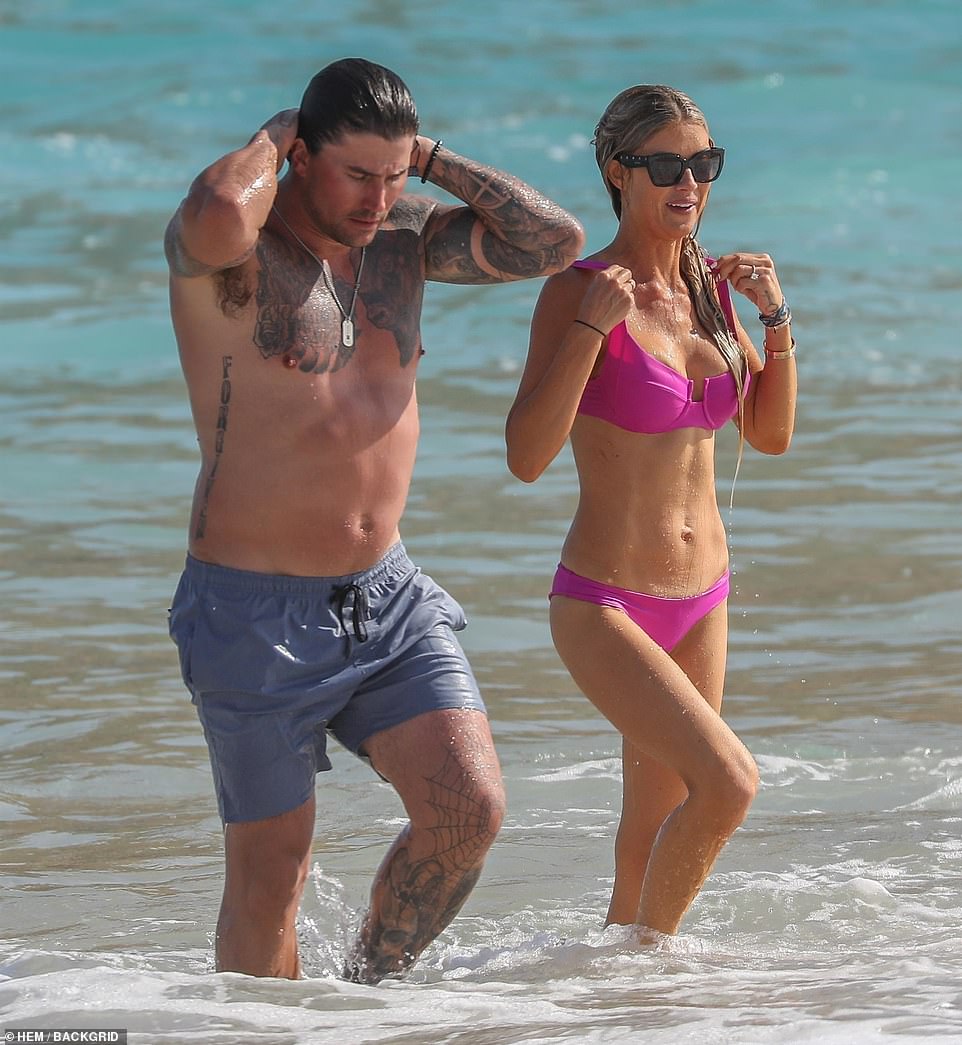 Cooling down: She shielded her eyes from the sun with a pair of black shades and wore a white baseball cap. The television personality accessorized with stacks of string bracelets 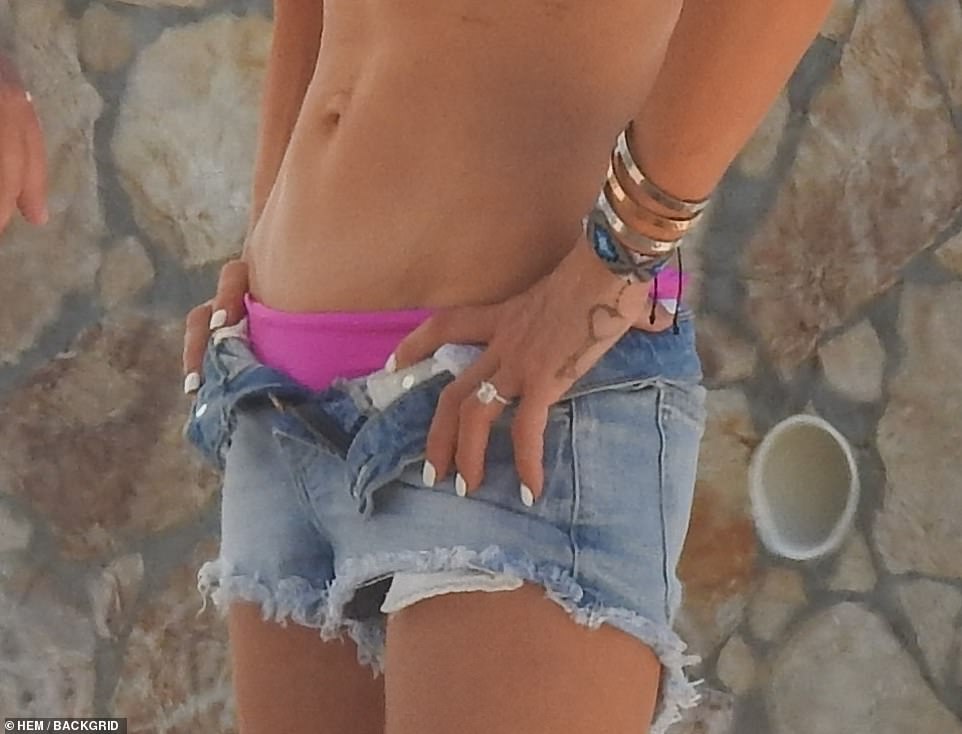 The bling: Here the diamond ring is seen clearly on her wedding finger as she modeled a pair of unzipped Daisy Duke shorts

Over the weekend, Christina deleted a photo that she posted on her Instagram Stories in which she was seen sporting the rock. Haack later reposted the same image but covered her wedding finger with a heart emoji.

The Christina On The Coast host donned a hot pink bikini with straps that crisscrossed and tied in the back.

She shielded her eyes from the sun with a pair of black shades and wore a white baseball cap. The television personality accessorized with stacks of string bracelets. 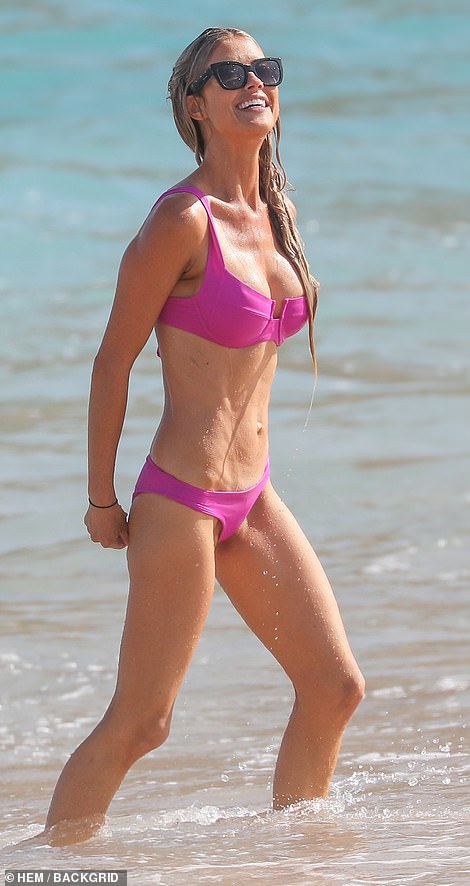 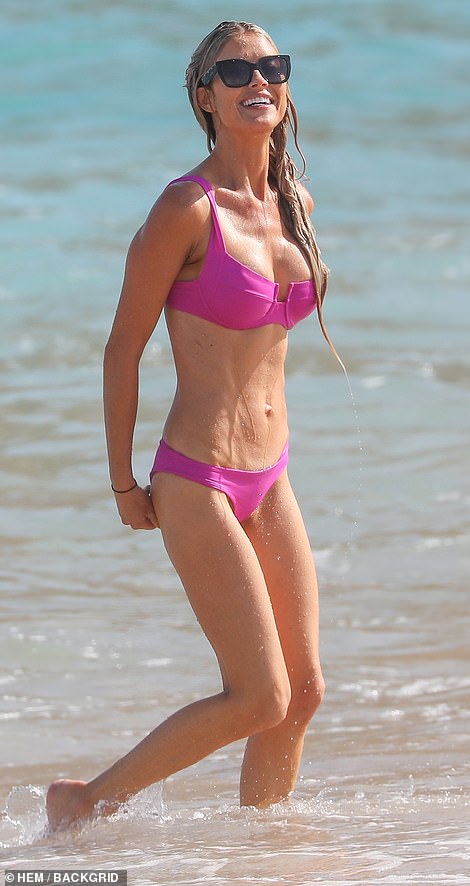 She has never looked better: Christina looked very slender in the suit as she smiled to onlookers 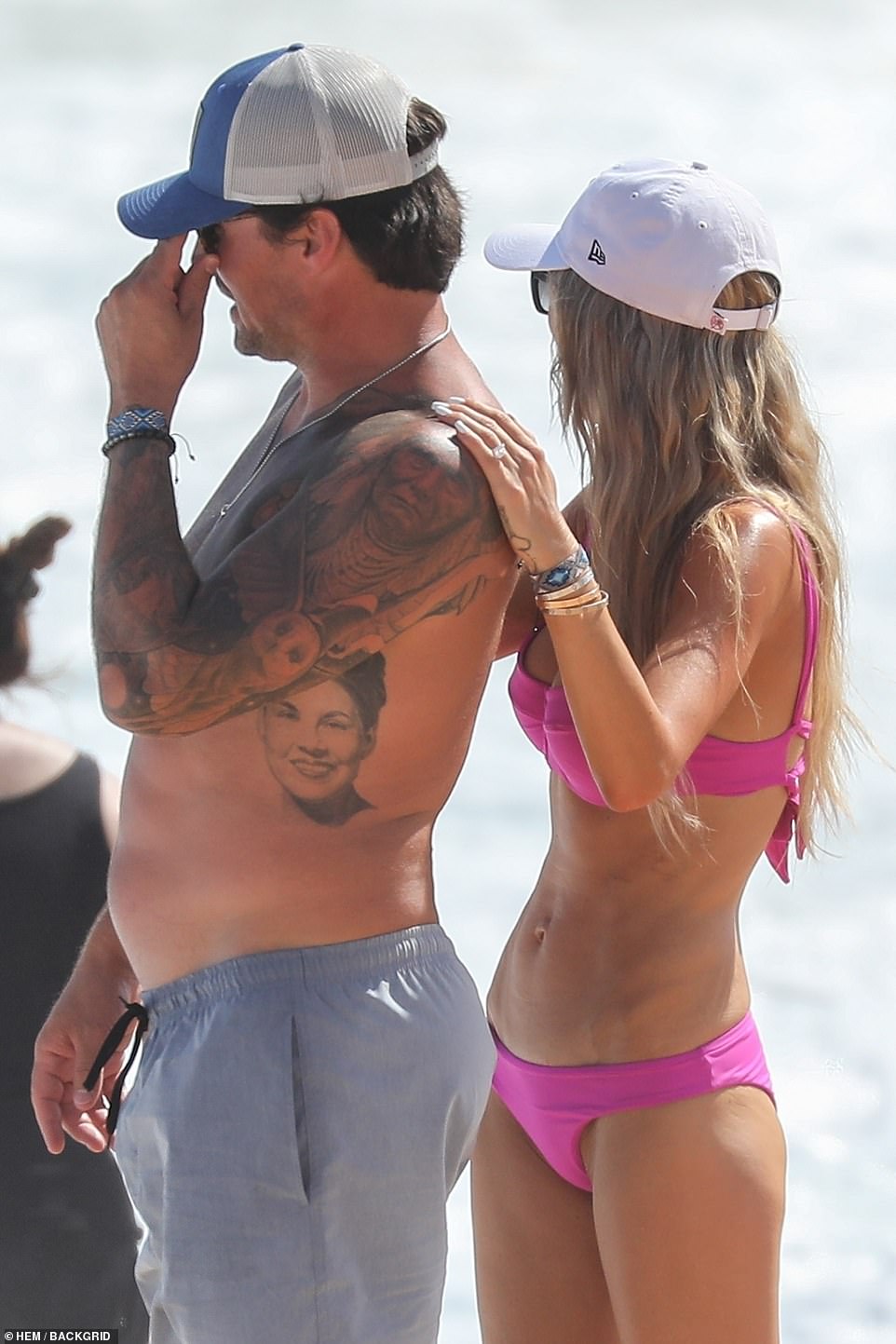 The bling day with her babe: And she also put her hand up on her love, which showed off the new bauble well 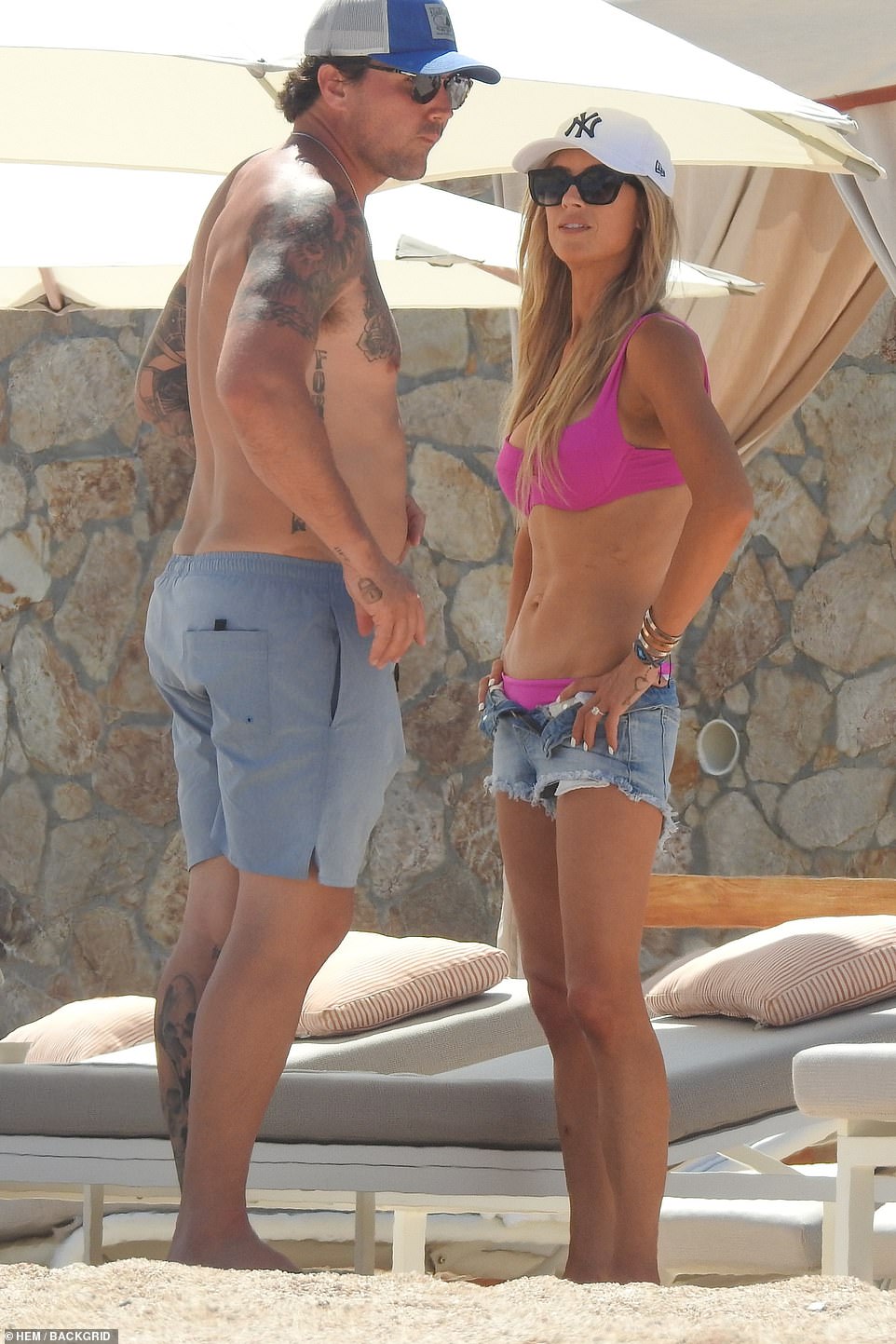 Face to face: Christina and Joshua seemed to be talking as she wore her micro shorts and added a NY cap in white 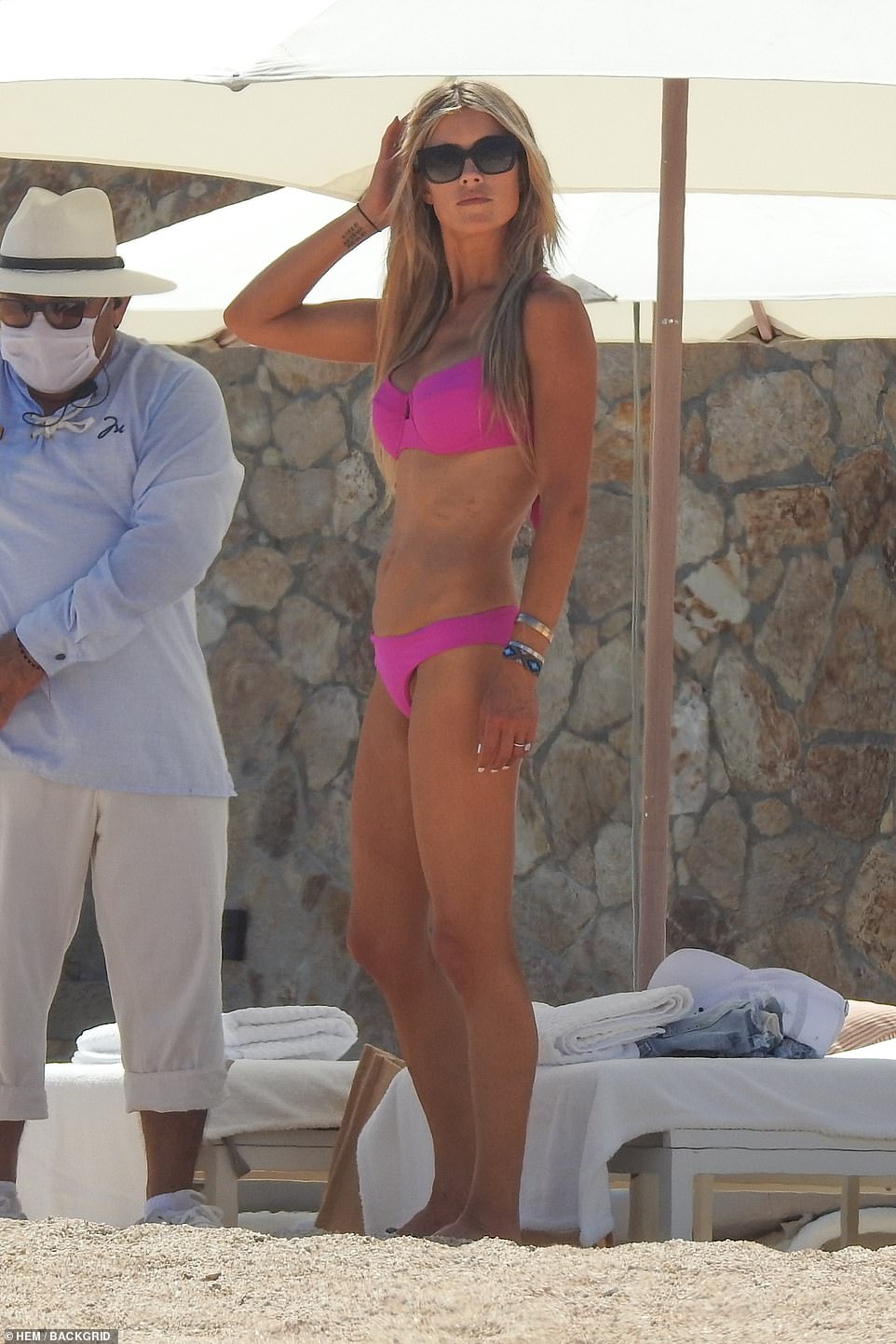 Rock it: On Sunday, the 38-year-old Flip Or Flop star was spotted wearing a massive diamond ring on her wedding finger as she frolicked on the beach with Hall in Cabo 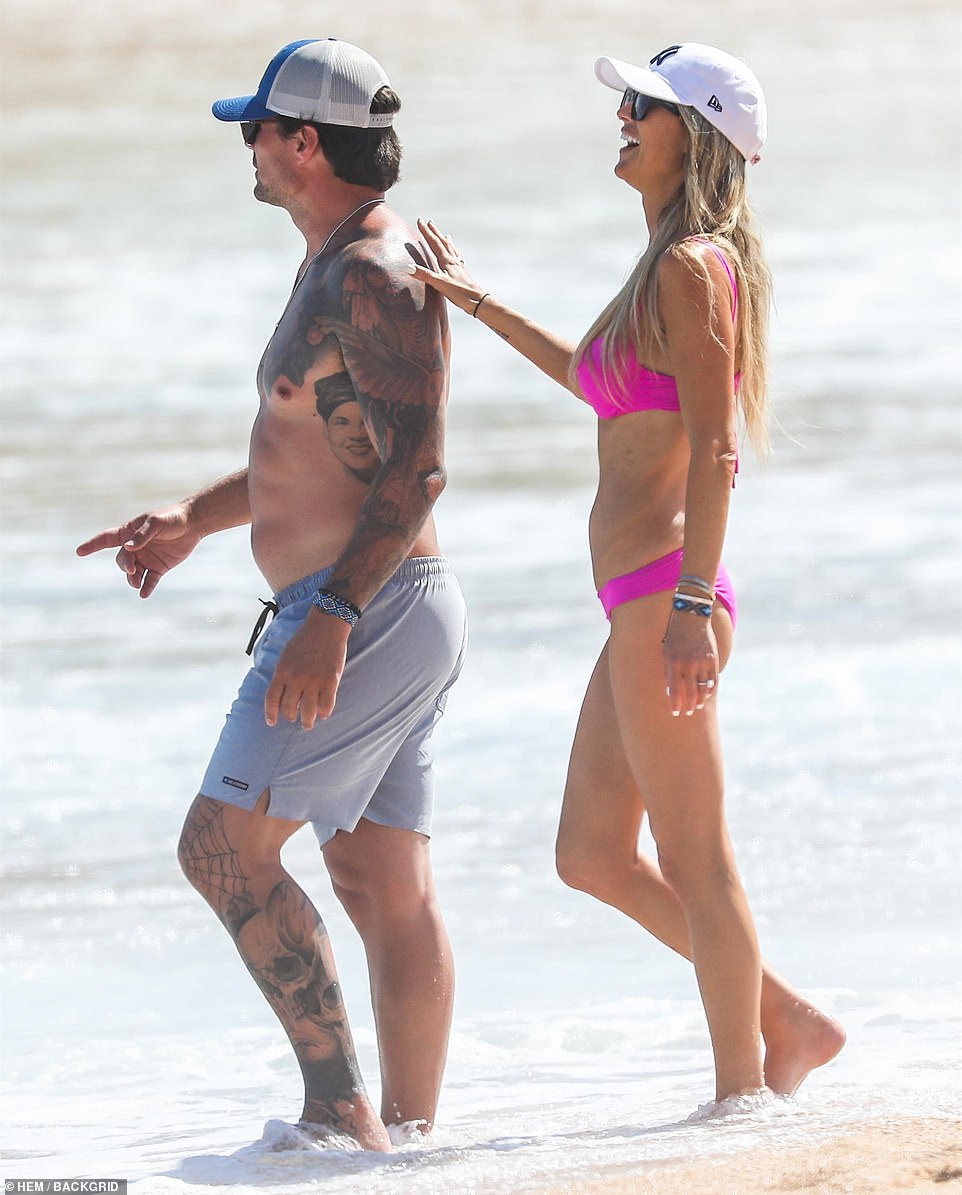 Cute look: The Christina On The Coast host donned a hot pink bikini with straps that crisscrossed and tied in the back

Haack wore a denim cut-off shorts which she left unbuttoned over her bikini bottoms.

Joshua was clad in gray swim trunks and sported a silver dog-tag necklace with beaded bracelets.  He covered his head with a blue and white baseball cap and donned black sunglasses.

Christina rested her hands on the her hips as the couple stood on the beach next to their lounge chairs.

Haack later removed her shorts to take a dip in the ocean with Hall. She beamed as the two waded through the ocean surf.

While strolled through the waves, Christina adjusted her bikini top and flashed the diamond ring.

The loved-up pair laughed and held hands as they walked out of the water and headed back to their lounge chairs.

Christina’s ring was once again visible as she tenderly rested her hand on her love’s shoulder. 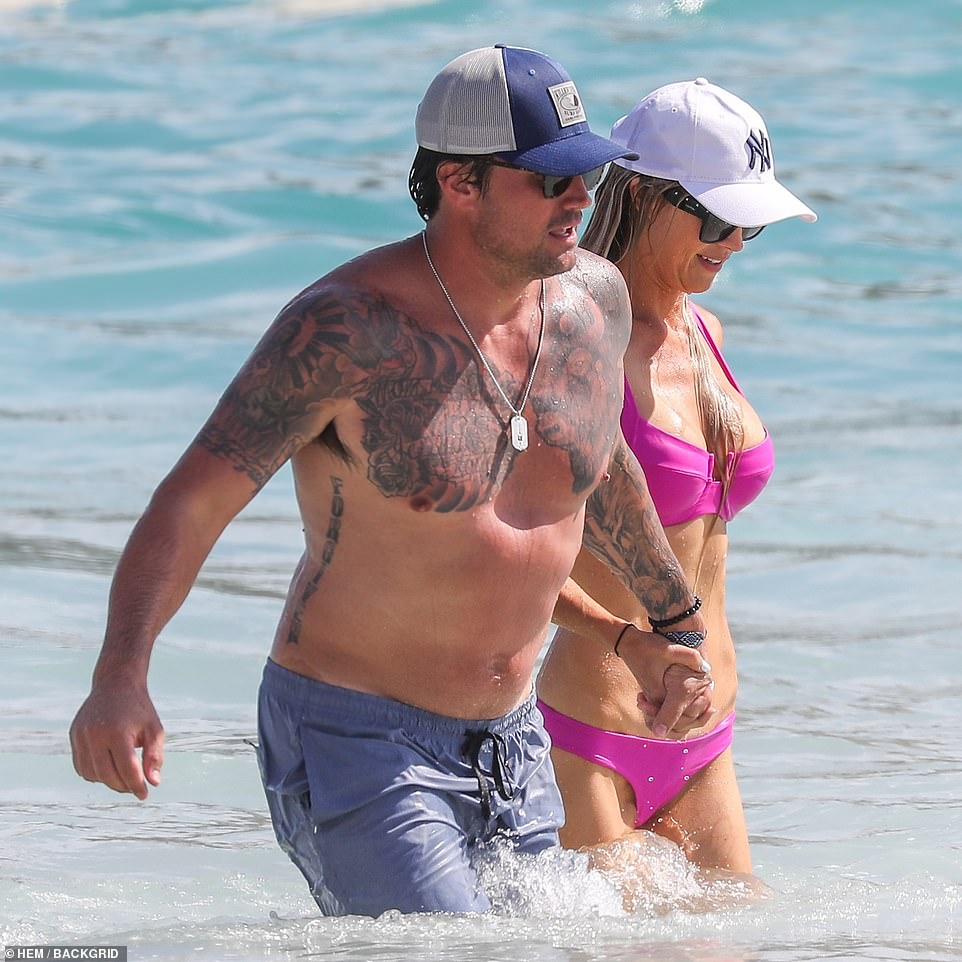 He sure does love her: They held hands as they walked through the water in their swimsuits 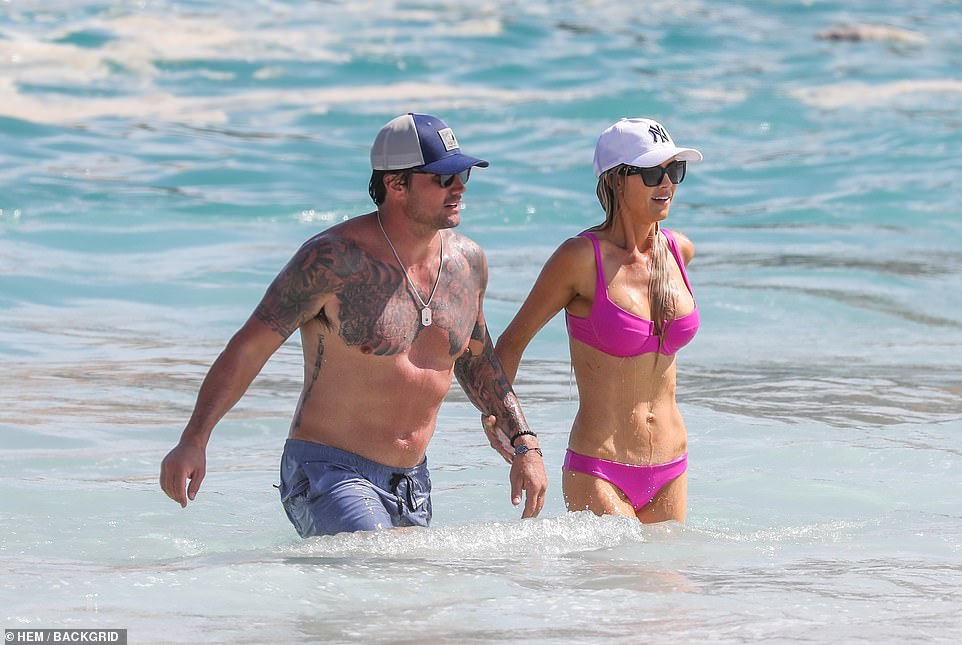 Tat man: Her lover has many tattoos on his chest and arms; he also wore a necklace in silver 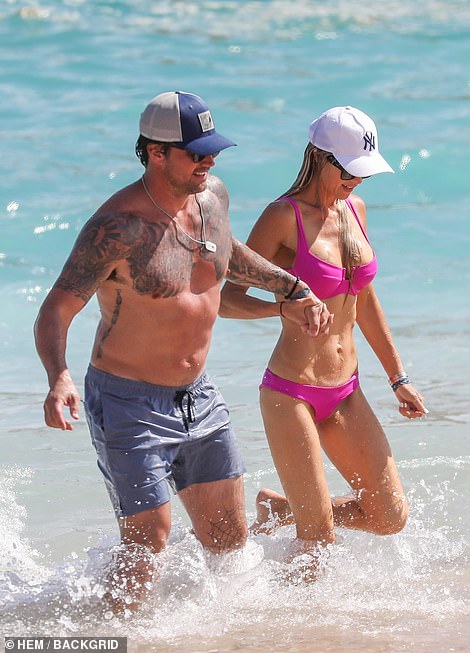 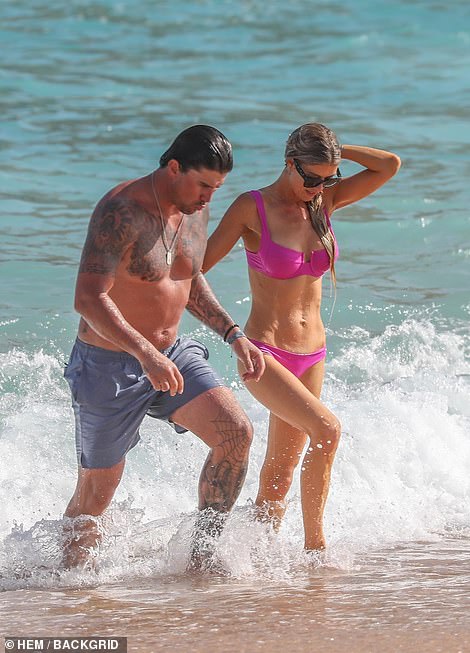 They have a special bond: On the weekend, Christina said that her beau made her feel protected in a ‘manly’ way 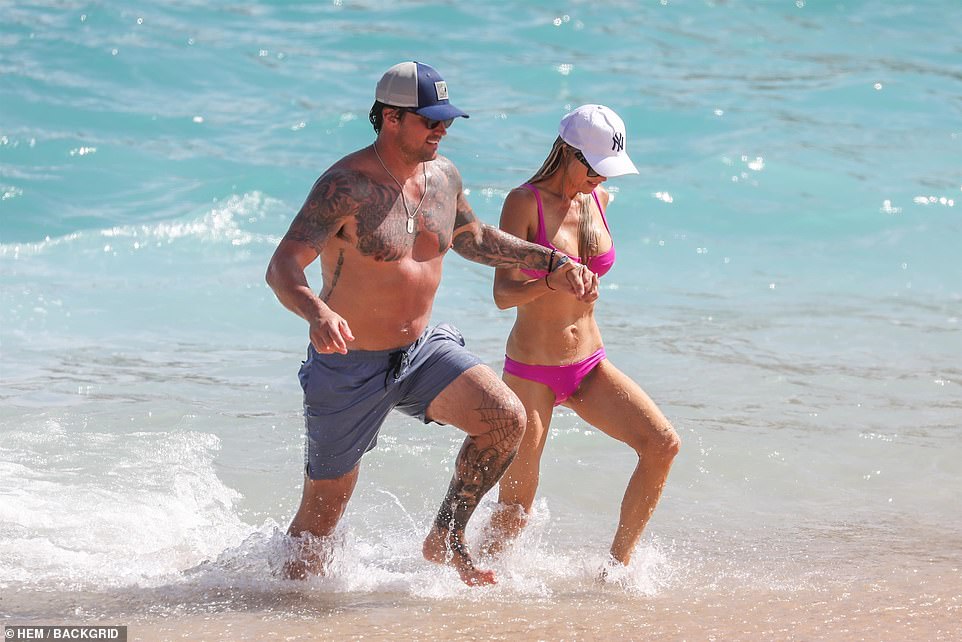 Her damp tresses cascaded down her back as she and Joshua took a seat on their lounge chairs. Hall gazed lovingly at Haack as she glanced down at her iPhone.

During their getaway, Christina seems to be on cloud nine with her boyfriend.

Earlier on Sunday the reality star shared an image where she was hugging him on the beach as she had on a pink bikini.

‘You give me that teenage kinda love vibe and manly protection. It’s a combo for a lifetime of happiness + success.

‘Thank you for reminding me what life and love are like when you put down the technology. I love you Josh ♾.’

She wore a pink bikini with her hair down as he had on blue swim trunks with his hat on backwards. 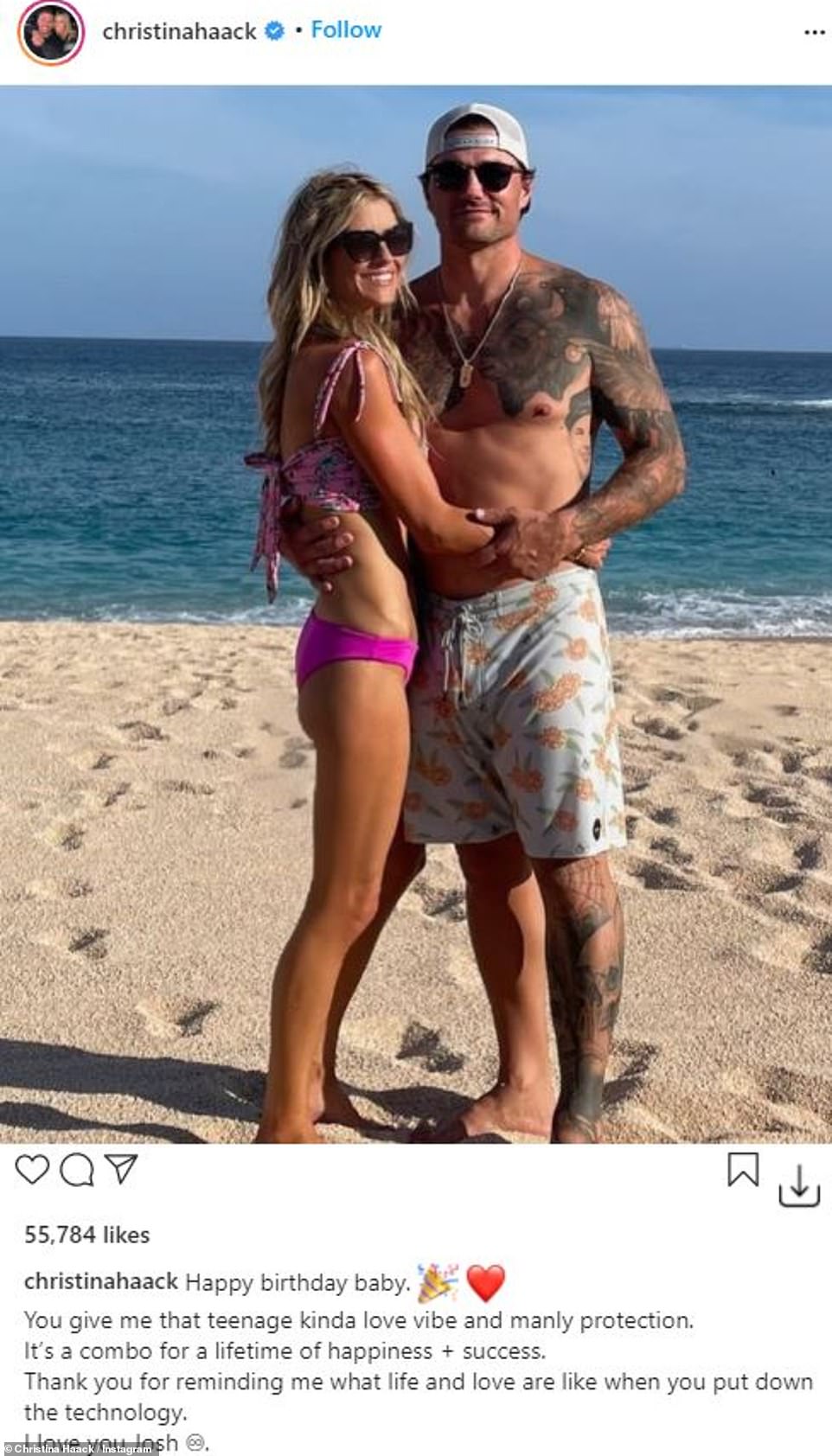 Young love feel: The blonde beauty also wished her love a happy birthday this weekend as she said she loved him

On Wednesday the lovebirds got cozy on the balcony of their hotel room. She was seen with a massive ring on her wedding finger then as well.

While the mom-of-three has yet to confirm whether wedding bells are in her near future, this is not the first time she was seen wearing the diamond. 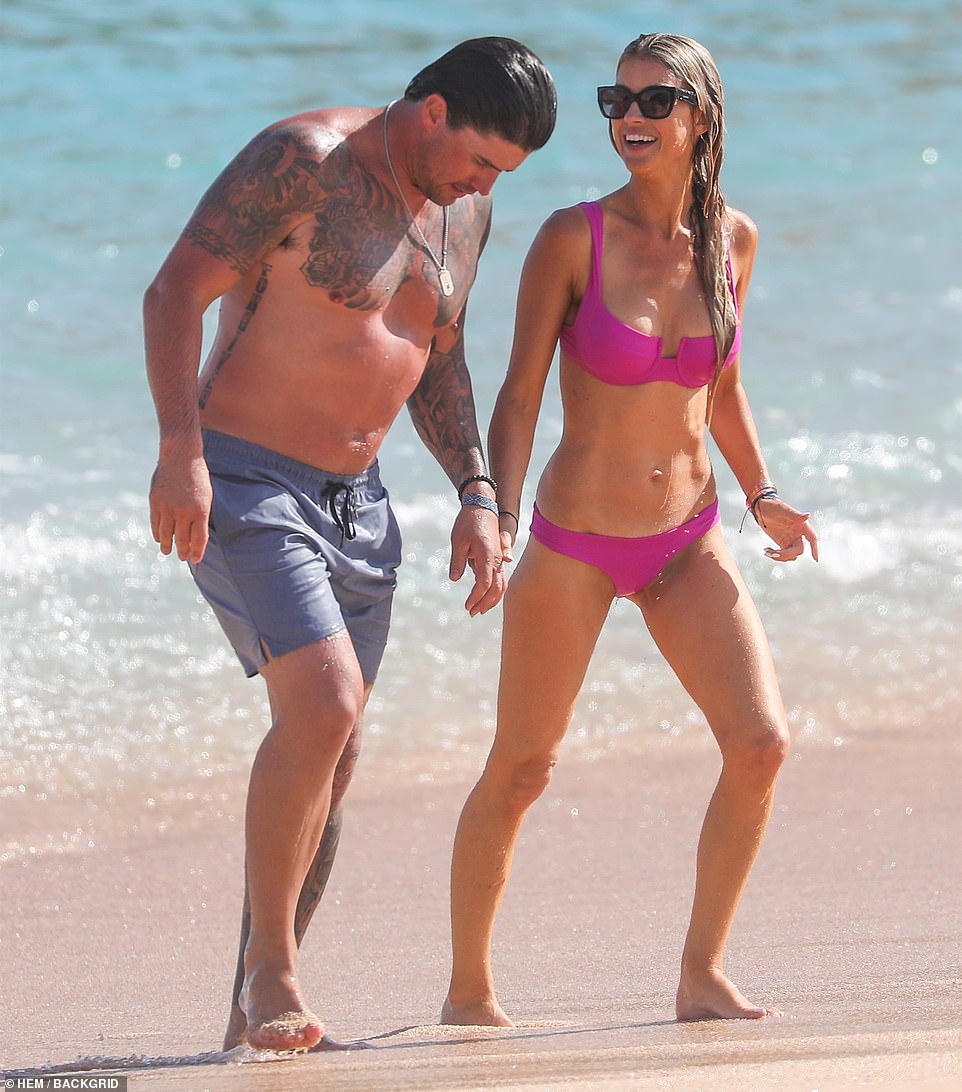 The smile that says she is in love with this guy: She flashed her pearly whites at her love as she walked up the shore 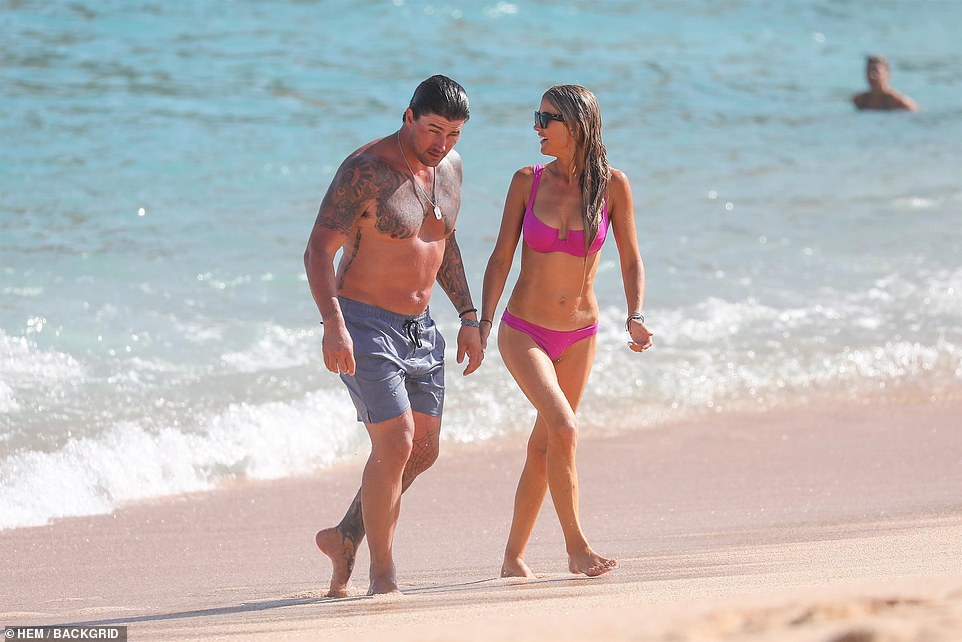 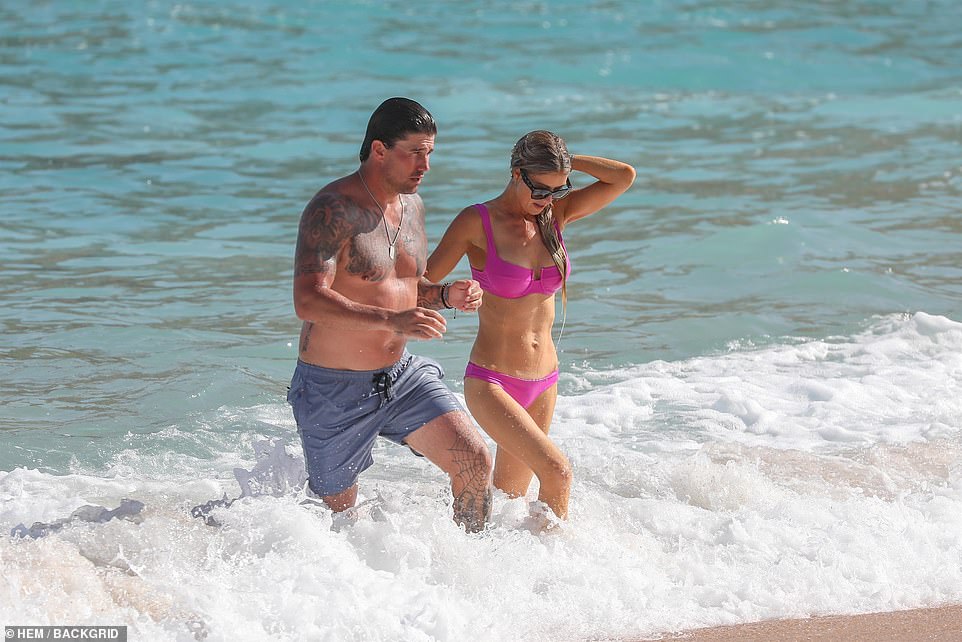 Her other half, who gazed lovingly at Haack during their conversation, wore a plain white t-shirt, blue cap and grey shorts.

Their conversation seemed light-hearted as they took in the views and chatted away.

Last month, the HGTV star posted a photo of herself wearing a dazzling diamond ring on her ring finger – before promptly deleting it, according to TMZ.

In the original photo, the ring was in view as Christina snuggled up to her beau during a day of boating with his mother.

The reality star couldn’t have looked any happier snuggling up to her beau while clutching a glass flute. ‘Boat day with babe and his pretty mama,’ Christina wrote in bold font in the snap.

Not long after posting however, the image was removed and replaced with a nearly identical snap of the trio – minus the ring. 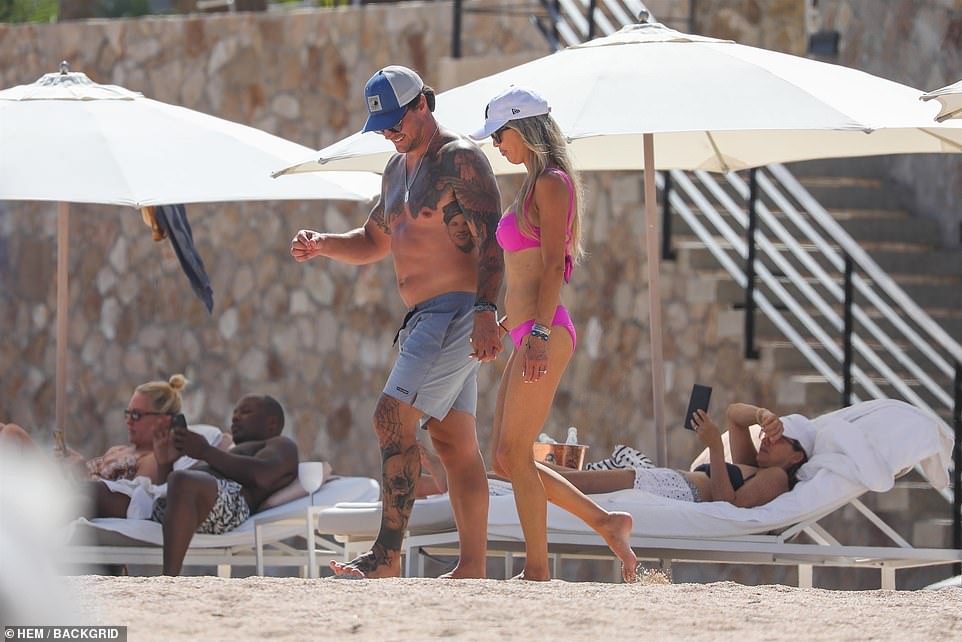 Tricky: This comes after Christina deleted a photo that she posted on her Instagram Stories in which she was seen sporting the rock 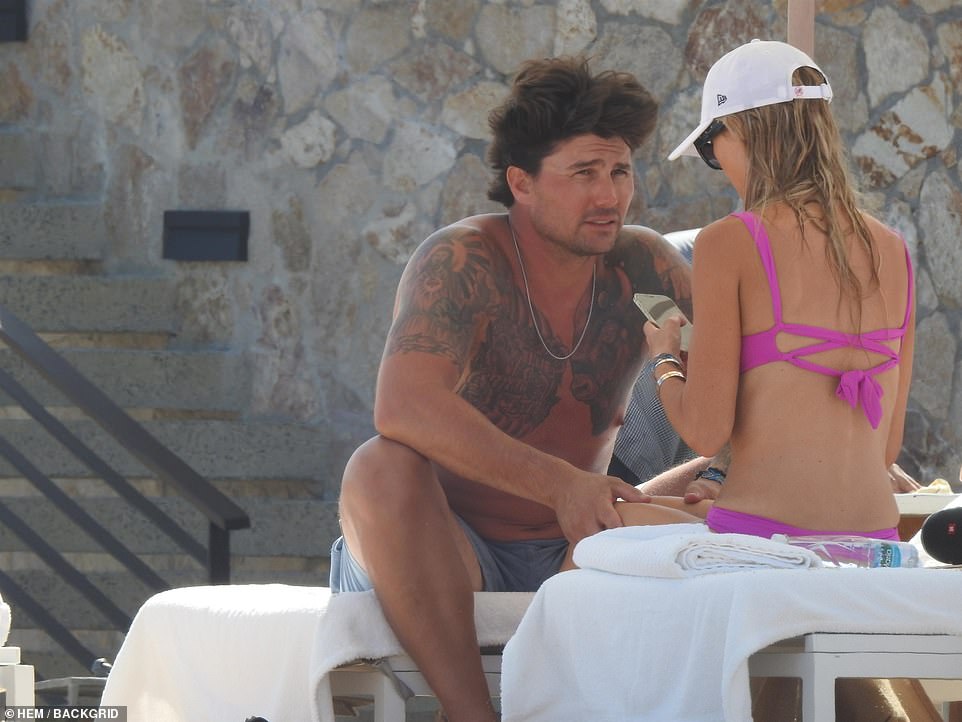 A serious talk: Hall held on to the beauty’s slender legs as she looked at her cell phone. His hair looked much puffier without his hat on

The new image was exactly the same as the last, but this time Christina was not wearing any ring.

It emerged back in July 2021 that Christina and Joshua had been ‘dating for a few months’, Us Weekly reported at the time.

She went Instagram official with her new beau during their getaway to Tulum, posting a photo from their ‘most whimsical/romantic dinner’ date.

In the caption of a photo capturing a romantic moment from their getaway, she opened up about their unbelievable connection. 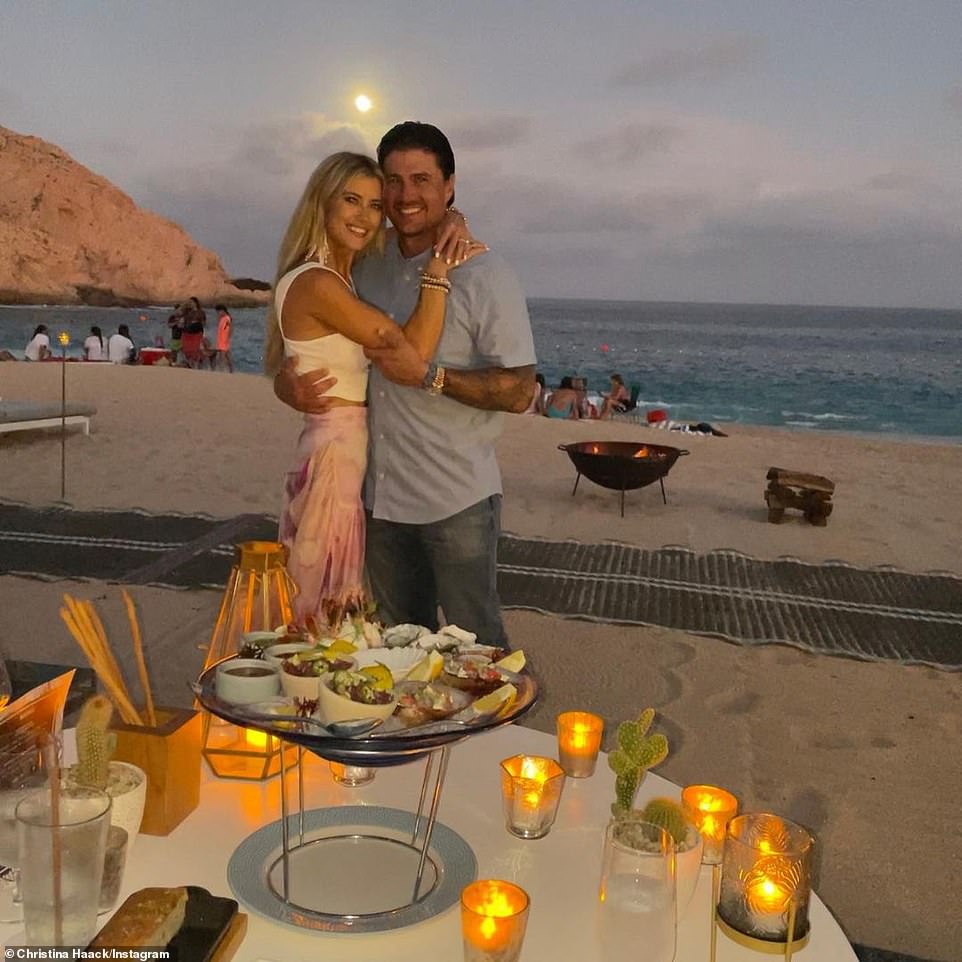 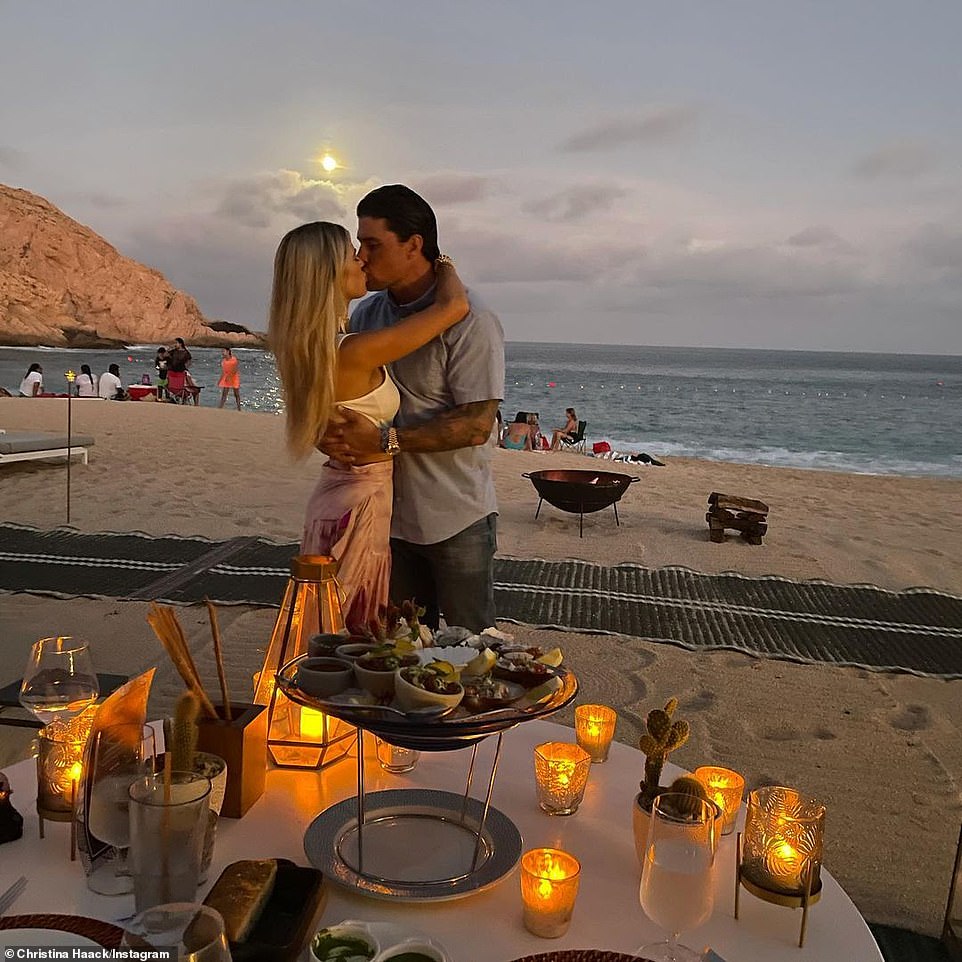 Clever caption: The reality TV star added a lock and key emojis in her caption that made it seem she was locked down 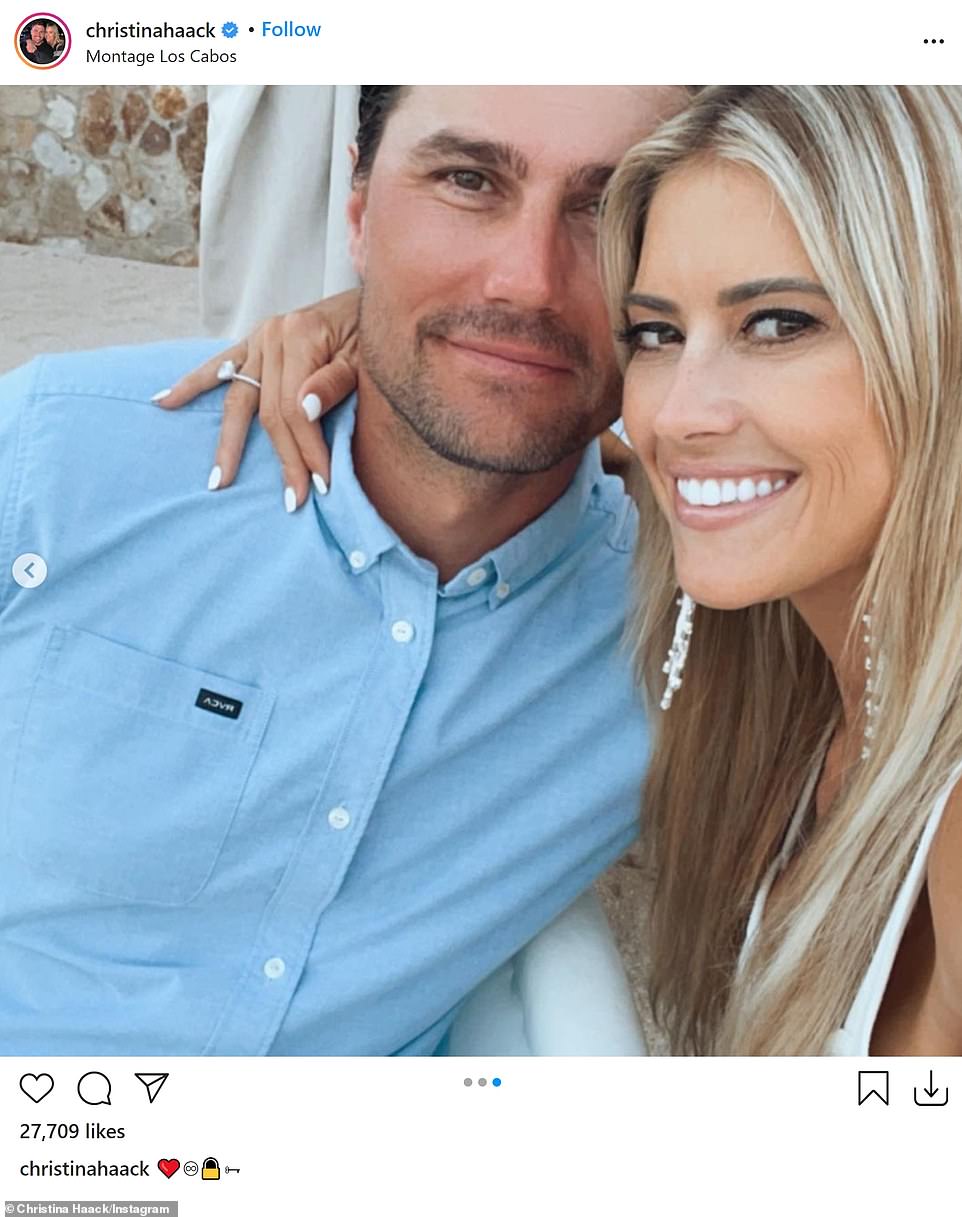 And there is that ring again: Now the ring appears to be on her right hand, but she may have flipped the photo

The reality star wrote about her non-traditional approach to self-healing, telling fans: ‘I met Josh when I wasn’t in a state of fear or fight-or-flight.’

Her journey included taking ‘time off social,’ and hiring a ‘spiritual coach,’ as well as smoking a psychedelic substance drawn from ‘Bufo toad,’ which she said ‘basically reset my brain and kicked out years of anxiety in 15 mins.’

‘When we met this past spring, the synchronicities hit us so hard and fast they were impossible to ignore,’ she recalled.

It was uncovered by numerous outlets at the time that the hunk was a former police officer and now works in real estate, which Christina is plenty familiar with.

In September 2020, Christina filed for divorce from Wheelers Dealers star Ant Anstead citing irreconcilable differences, with their divorce finalized this past June. They share one-year-old son Hudson together. 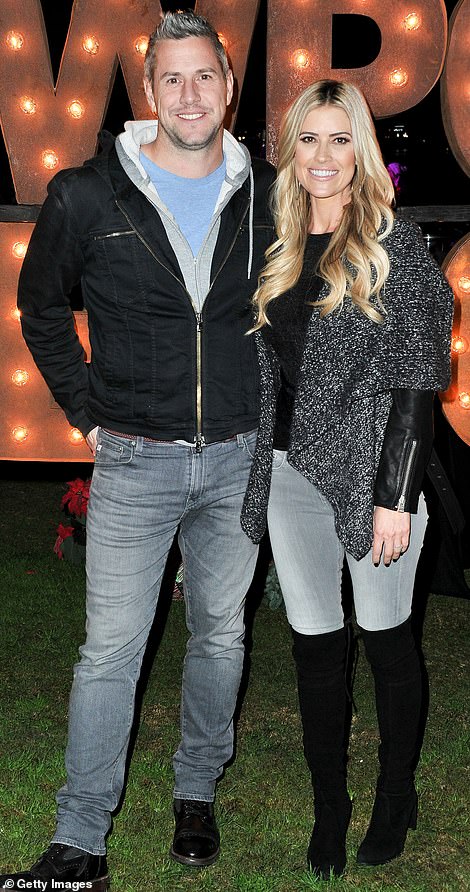 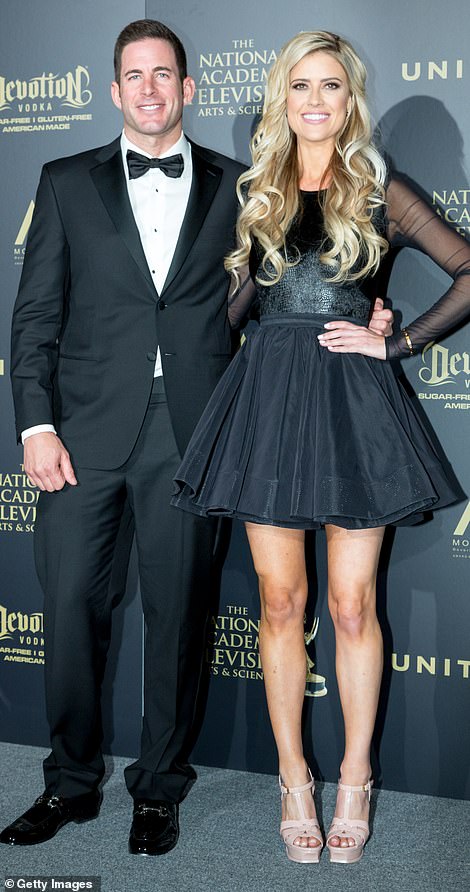 Split: In September 2020, Haack filed for divorce from Wheelers Dealers star Ant Anstead, left,  citing irreconcilable differences; seen in 2019. She was also previously married to her Flip or Flop costar Tarek El Moussa, right, with whom she shares daughter Taylor, 10, and son Braydon, five, with (pictured 2017)

Ant has since entered into a relationship with Oscar-winning actress Renee Zellweger, 52.

On Wednesday, the pair made their relationship Instagram official with a sweet snap showing Zellweger with her arms wrapped around Anstead.

She was also previously married to Tarek El Moussa, with whom she shares daughter Taylor, 10, and son Braydon, five, with.

Tarek has since gone on to a romance with Selling Sunset star Heather Rae Young, 33, and the pair are engaged.

Earlier this week, Tarek broke his silence on the nasty verbal tirade he hurled at Haack on the set of their show Flip Or Flop back in July.

Speaking with E!’s Daily Pop, the HGTV star, 40, admitted he had a ‘disagreement’ with his ex that he deeply regretted and hoped to never repeat.

Though he did not get into details about the altercation, he did admit there were ‘choice words said on both sides.’ 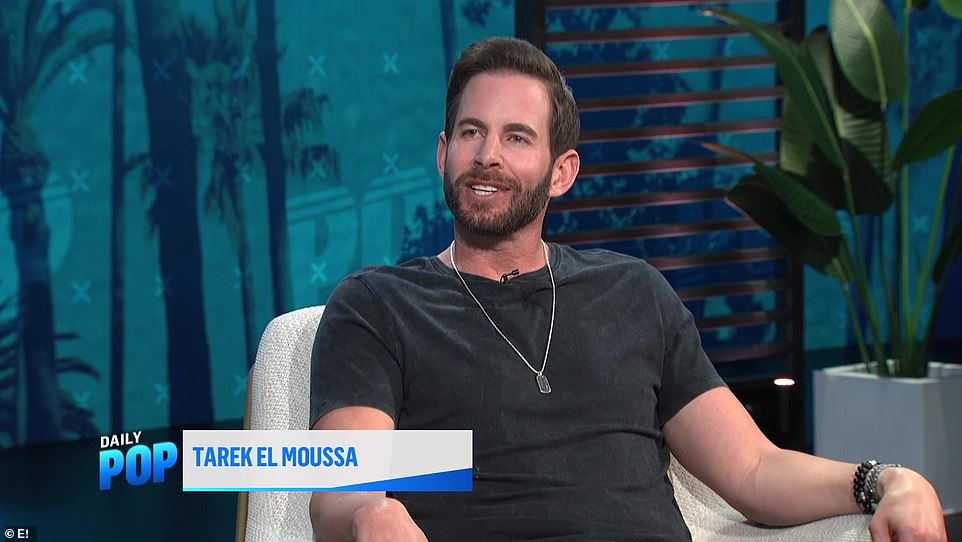 ‘It can be stressful working with an ex’: Earlier this week, Tarek broke his silence on the nasty verbal tirade he hurled at Haack on the set of their show Flip Or Flop back in July

‘You know Christina and I, we worked together wow for over 10 years now and we’ve been working together as exes for five years now,’ Tarek began. ‘As you can imagine, it can be stressful working with an ex and we did have an incident where some choice words were said on both sides and I’m sure we both wish the whole thing never happened.

‘I mean, I certainly do, but I mean honestly since we got into that little disagreement a few months back, I’ve just decided that moving forward, never again.

‘The whole thing just sucked for everyone involved.’