Chrissy Teigen’s crying made a very meme-able moment at the 2015 Golden Globes.

And the celebrity cookbook author, 35, poked fun at her very emotional display on Instagram Sunday, hours ahead of 2021’s Golden Globes.

The newly-sober celeb was the first person to admit her reaction to husband John Legend’s win was a bit over-the-top, captioning a ‘Happy anniversary to this drunk dumba** lmao.’ 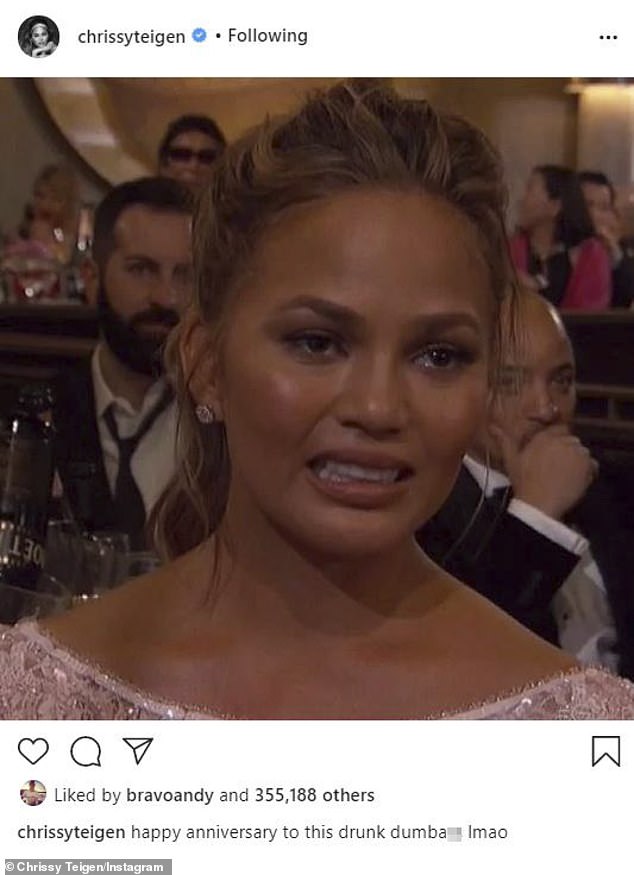 Under the influence: Chrissy Teigen poked fun at her much-memed drunken crying face from the 2015 Golden Globes on Instagram Sunday ahead of the 2021 event

Chrissy first publicly shared she was sober in late December, telling an Instagram commenter she was four-weeks drink-free.

Taking to Instagram Stories after, she explained: ‘One month ago, on my birthday, I got this book from my doctor and friend.

‘I was done with making an a** of myself in front of people (I’m still embarrassed), tired of day drinking and feeling like s**t by 6, not being able to sleep.’

She credited Holly Whitaker’s self-help book, Quit Like A Woman: The Radical Choice To Not Drink In A Culture Obsessed With Alcohol, with helping her decide to kick the habit. 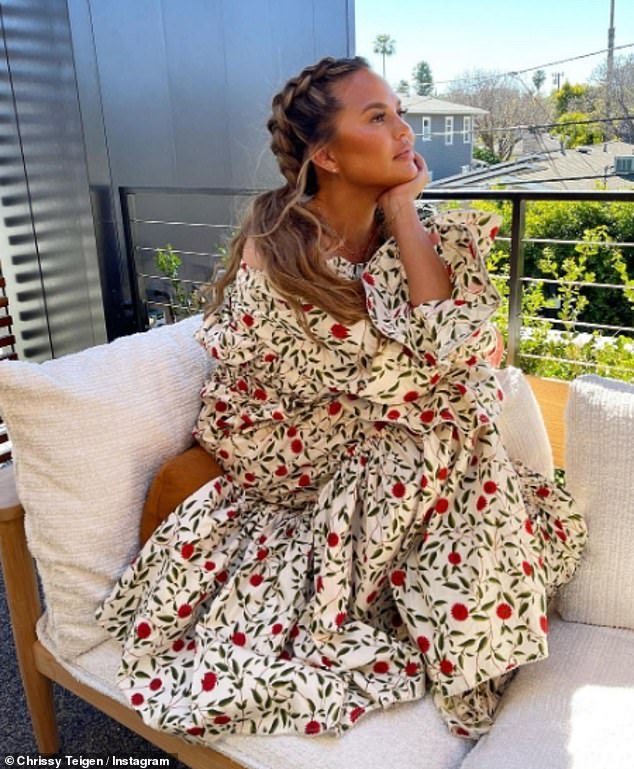 Dry life: Chrissy first publicly shared she was sober in late December, telling an Instagram commenter she was four-weeks drink-free 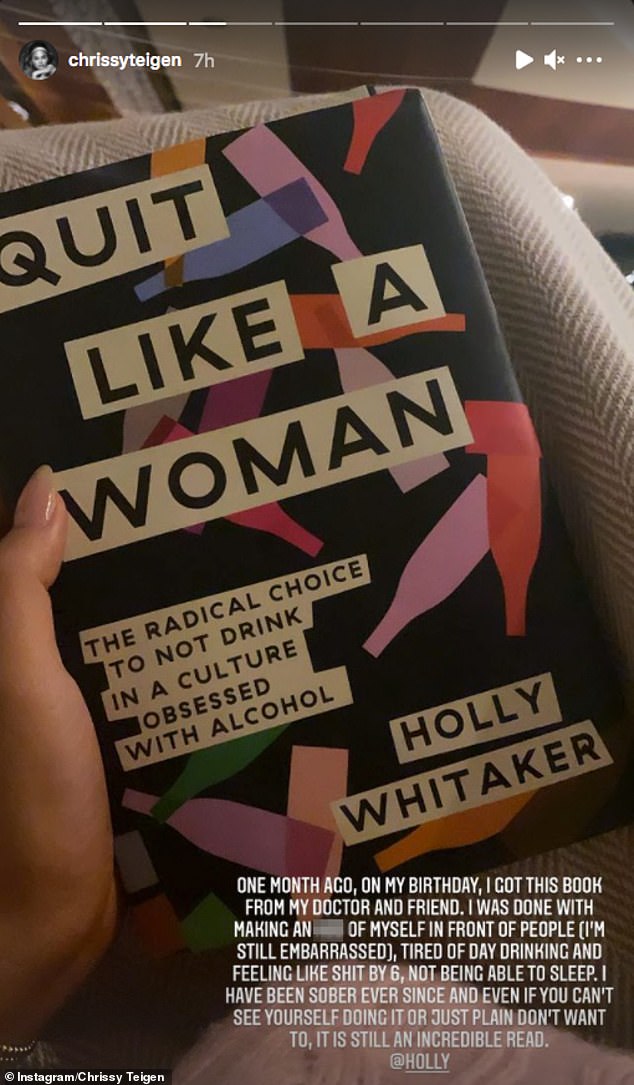 ‘Incredible read’: The model said Holly Whitaker’s self-help book, Quit Like A Woman: The Radical Choice To Not Drink In A Culture Obsessed With Alcohol, impacted her choice

Chrissy, who celebrated her birthday on November 30, urged her social media followers to read the book, even if they aren’t planning to ditch alcohol.

‘I have been sober ever since and even if you can’t see yourself doing it or just plain don’t want to, it is still an incredible read,’ she went on.

Weeks later, she reflected on how far she’d come while in Washington DC for the inauguration of President Joe Biden.

Sharing a charming shot of the family looking out at the Washington Monument, she wrote: ‘Ran our a**** up the stairs just for this shot.

‘just incredible to be here. sober. I know that’s weird but it’s like…a different world for me. everything is new and better very happy. the most happy bigly happy.’ 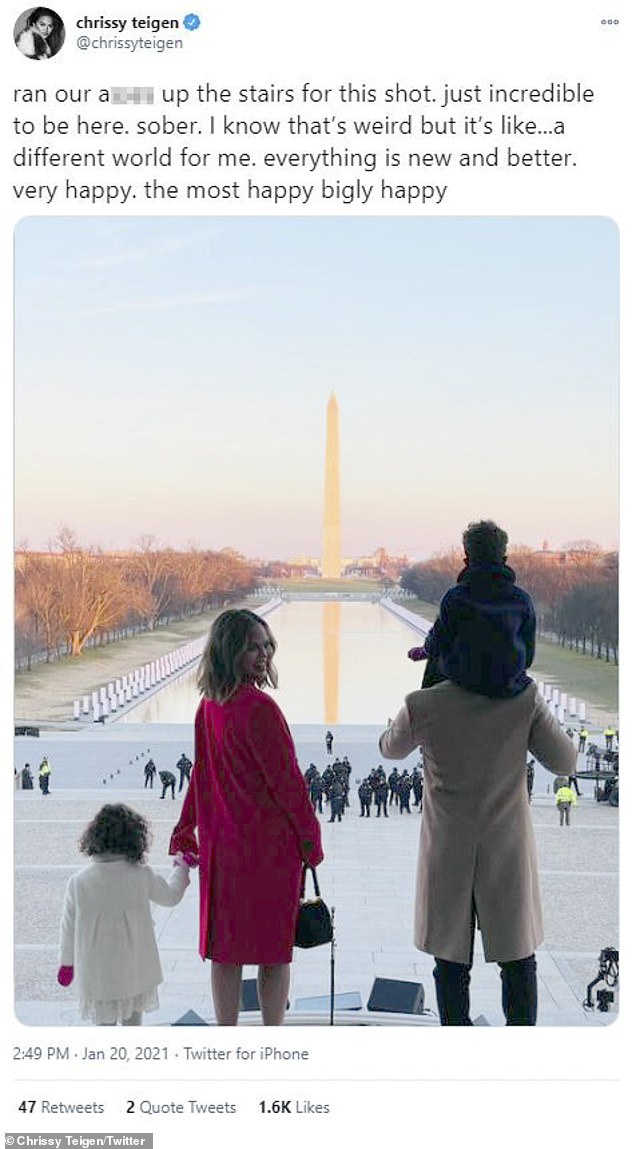 Thankful: Chrissy previously expressed how thankful she was to have experienced the historical event ‘sober,’ a decision that has made her ‘very happy’ 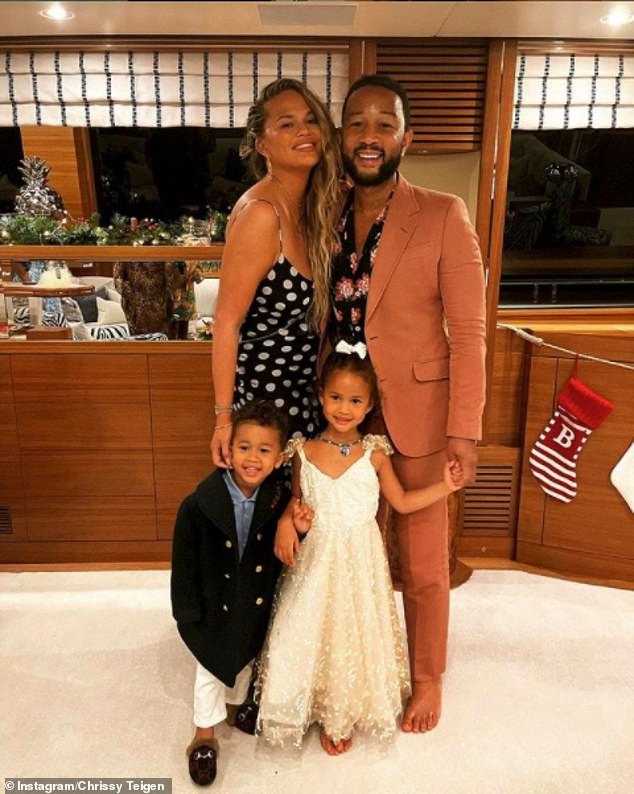 Her decision to embark on a sober lifestyle came not long after she and John tragically lost their baby son Jack last September.

Chrissy has been open about her relationship with alcohol in the past. In a 2017 Interview with Cosmopolitan, she said: ‘I was, point blank, just drinking too much.

She continued: ‘And then I felt bad for making an a** of myself to people that I really respected.

‘And that feeling, there’s just nothing like that. You feel horrible. It’s not a good look for me, for John, for anybody.’ 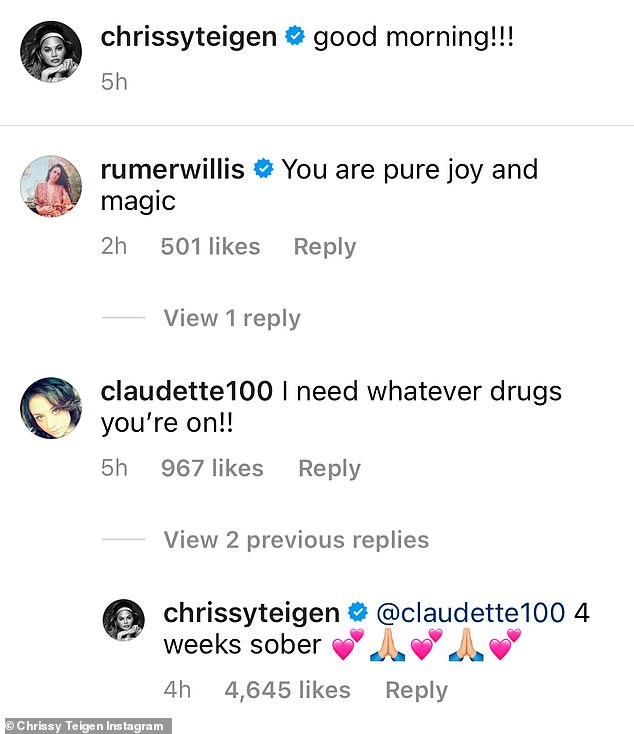 The exchange: A fan marveled at her level of energy and said, ‘I need whatever drugs you’re on!!,’ to which Teigen responded, ‘4 weeks sober,’ with prayer hand emojis and hearts

In 2018 she spoke to Women’s Health Magazine and said that postpartum depression after having Luna also caused her to drink to cope with the pain before she was prescribed an antidepressant.

‘After Luna, I was drinking too much. I wasn’t eating as much because I was full from drinking. I wasn’t being good to my body.’

In February 2019 after overindulging at the Oscars, Chrissy tweeted in the early hours of the morning: ‘Oh my god I feel like absolute s**t. I hereby go sober for at least the week. Booze is poison.’

A history of alcohol abuse in her family, she said having ‘just ‘one drink’ was hard for her: ‘I don’t know how to go to an awards show and not drink.’ 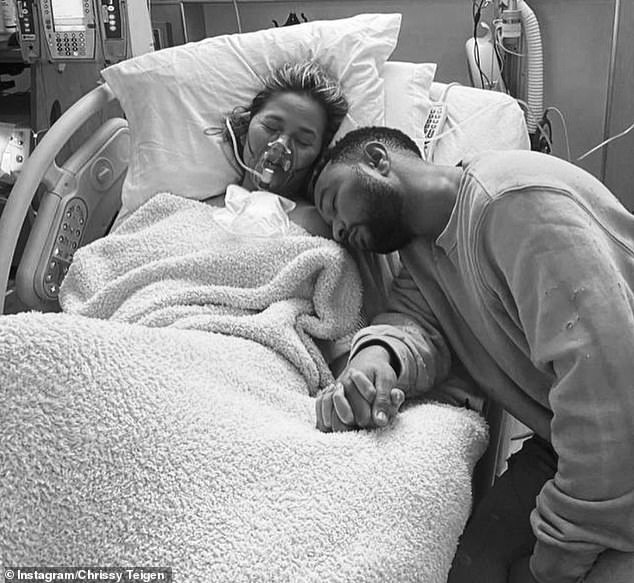 Tragic loss: Her decision to embark on a sober lifestyle came not long after she and John tragically lost their baby son Jack in September