Chris Quinten re-proposes to fianceé Robyn Delabarre, 21, after she ‘lost her £3k engagement ring’ as they pack on the PDA at his 62nd birthday bash

Coronation Street star Chris Quinten celebrated his 62nd birthday with his stripper fiancée Robyn Delabarre by re-proposing to her on Thursday night.

The actor was packing on the PDA with his stripped bride-to-be as they marked the occasion at their favourite London haunt The Secret Lounge.

The second proposal comes after it was reported Robyn lost her £3,000 engagement ring during a romantic Turkish getaway, as she desperately tried to save Chris from drowning. 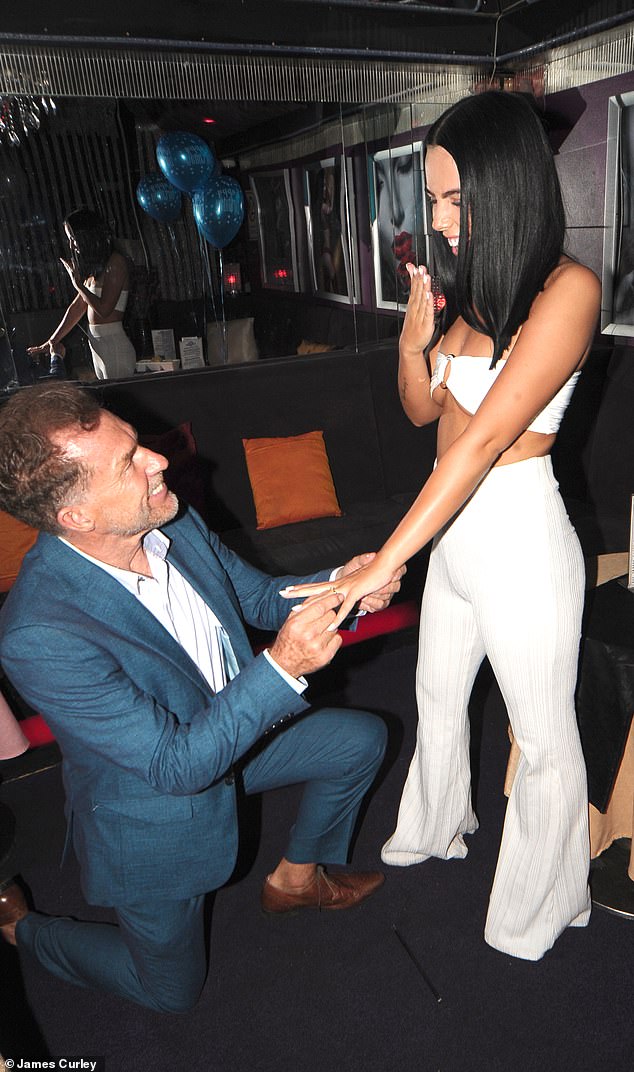 Marry me again! Coronation Street star Chris Quinten celebrated his 62nd birthday with his stripper fiancée Robyn Delabarre, 21, by re-proposing to her on Thursday night

Chris cut a dapper figure in a smart blue suit as he delightedly got down on one knee with Robyn, with what appeared to be a replacement for her lost ring.

The couple celebrated the occasion with kiss after kiss, as Robyn gushed about her delight in having the ring replaced.

Speaking to onlookers at the bash, she said: ‘I’m over the moon. I am devastated I lost the original ring but Chris proposing tonight on his birthday means everything.’ 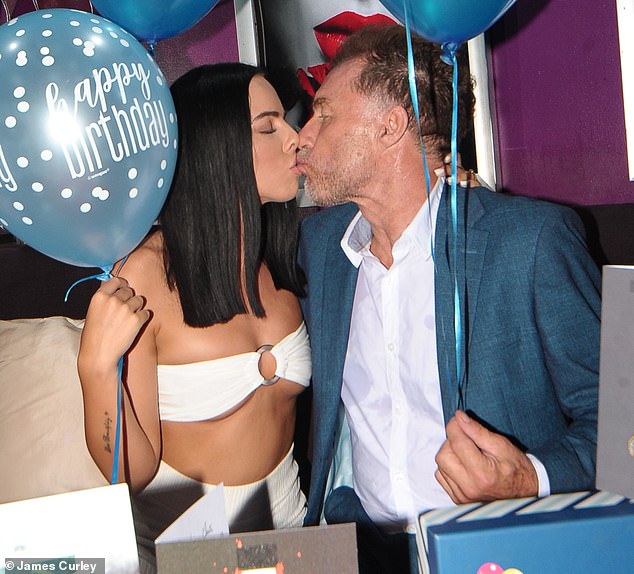 Sweet: The couple were packing on the PDA for the lavish birthday celebration, as they shared kiss after kiss at their favourite London haunt The Secret Lounge 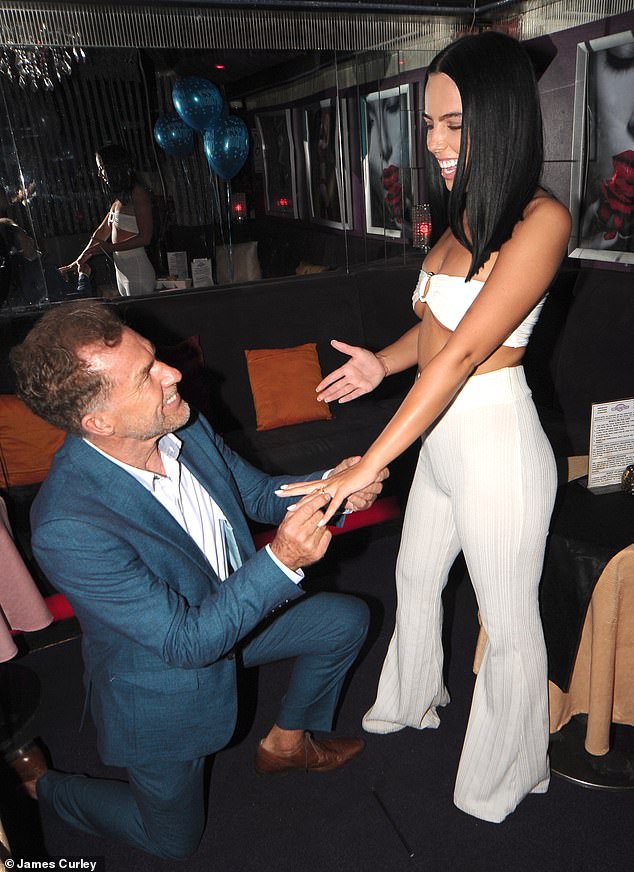 Marry me? During the birthday celebrations, Chris got down on one knee and proposed to Robyn for the second time, with a replacement for her lost engagement ring 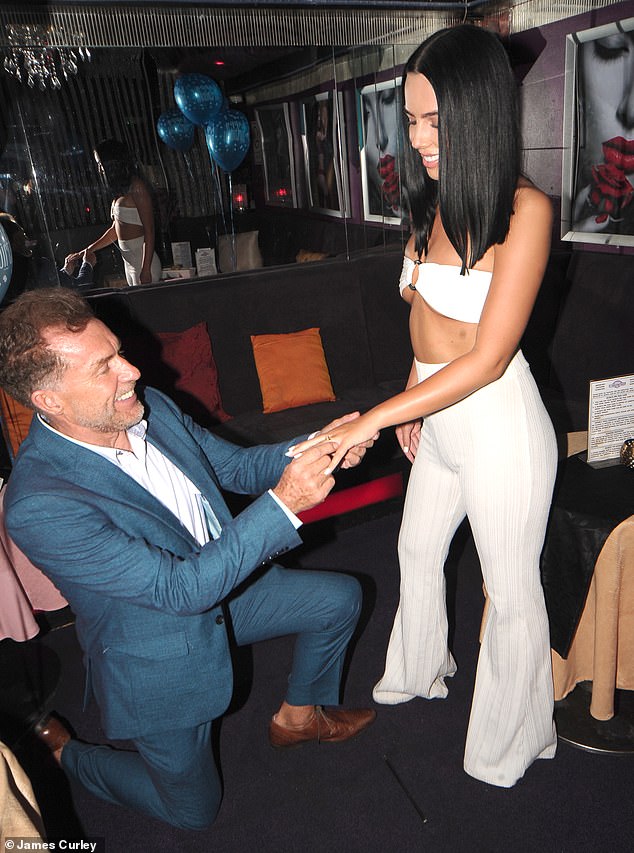 Happy: The soap star grinning from ear to ear as his bride-to-be eagerly accepted for the second time 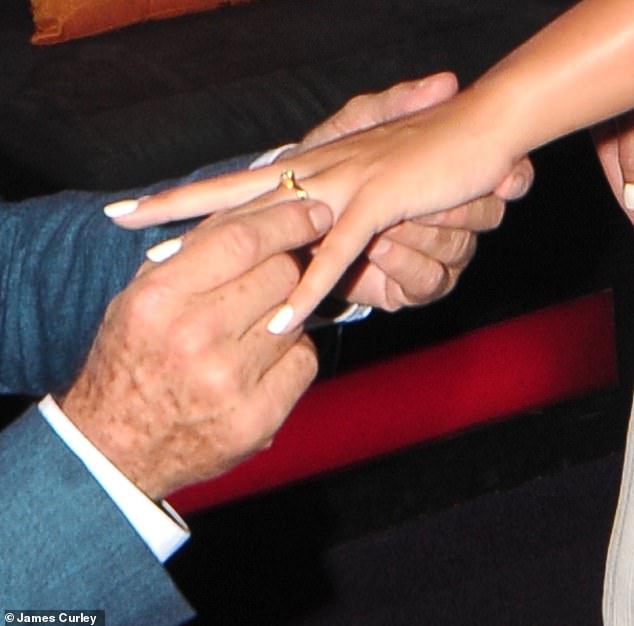 Speaking: The ring proved to be an ideal replacement for the misplaced jewellery as it was placed on Robyn’s finger 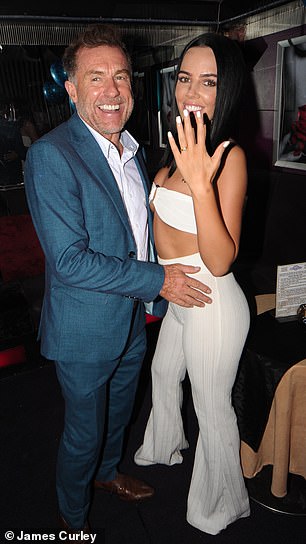 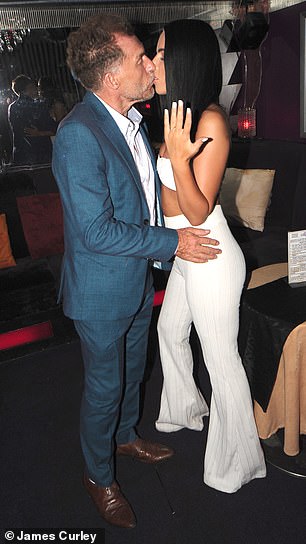 Beaming: The couple also proudly displayed their recently whitened smiles, after jetting to Turkey to undergo the procedure 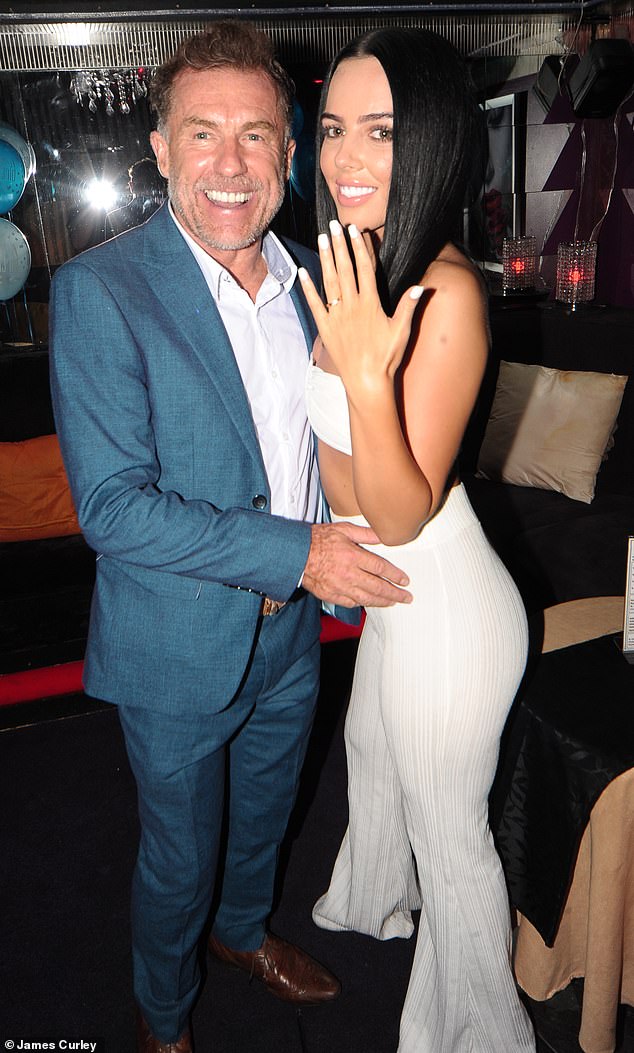 Dazzling: Robyn told onlookers at the bash she was ‘devastated’ to lose the ring, but couldn’t hide her delight at the surprise replacement

She wore her raven locks slickly around her shoulders, adding deft touches of natural make-up to her complexion.

The pair beamed for snaps during the evening, showcasing their recently enhanced ‘nashers’.

The pair recently jetted to Turkey to have their teeth whitened ahead of their wedding.

They marked Chris’ birthday while abroad – with their London soiree a chance to celebrate again with their pals in England.

Sexy: Robyn proudly displayed her toned abs in a skimpy white bandeau and flared trousers as she posed up a storm at the bash 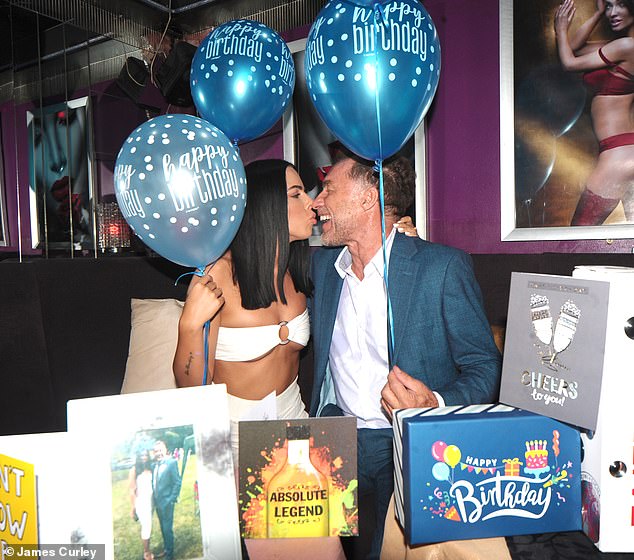 Cute: Surrounded by Chris’ birthday gifts, the couple shared a slew of romantic kisses as they marked his birthday in style 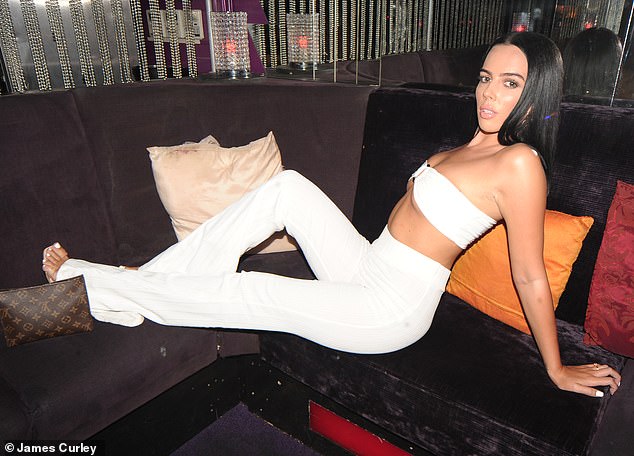 Wow! Robyn looked sensational in her stylish all-white look as she relaxed in her favourite London haunt 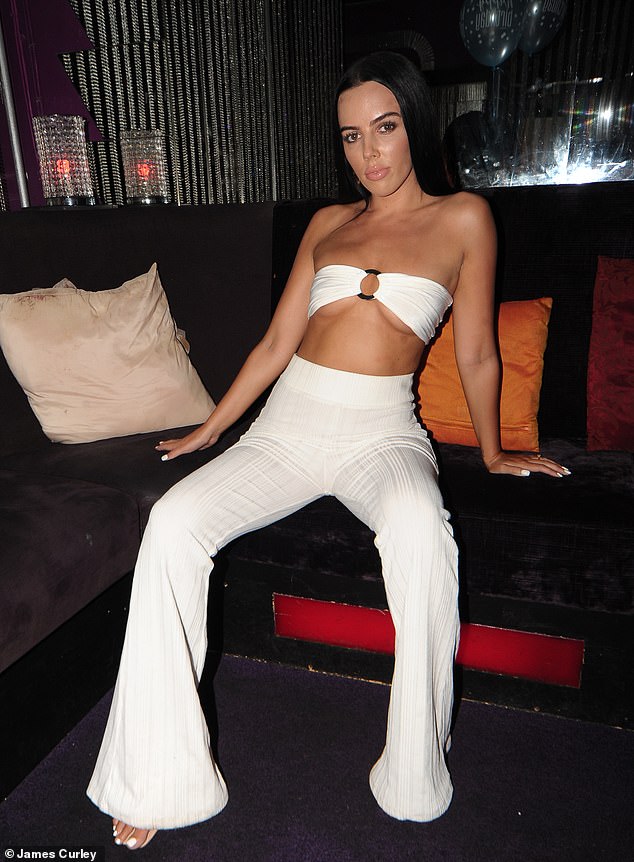 Stunning: The stripper announced her engagement to Chris last month, after he proposed at her 21st birthday 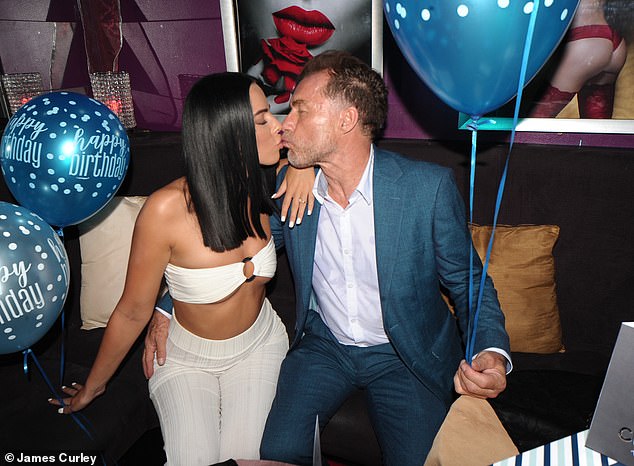 To be wed! Chris surprised fans with news of his engagement, given the 41 year age gap between him and Robyn

While on holiday, the veteran soap star was showered with designer gifts by his bride-to-be. Taking to social media to share a snap of the gifts, Chris captioned the post: ‘It’s my birthday! My beautiful cake presents and balloons I’m a very happy man.’

Chris later took to Instagram Stories to reveal that he’d also been surprised with a birthday breakfast in his hotel room, complete with personalised balloons, cocktails and a delicious chocolate cake.

It was also reported earlier this month that Robyn lost her £3,000 engagement ring on the Turkish break, after jumping into the sea to save Chris from drowning. 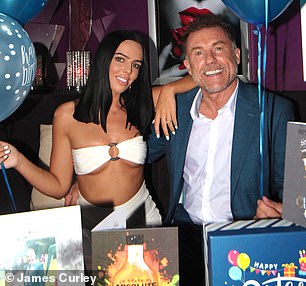 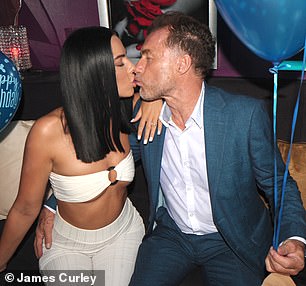 Excited: Chris and Robyn couldn’t hide their love for one another as they packed on the PDA during their lavish birthday celebrations 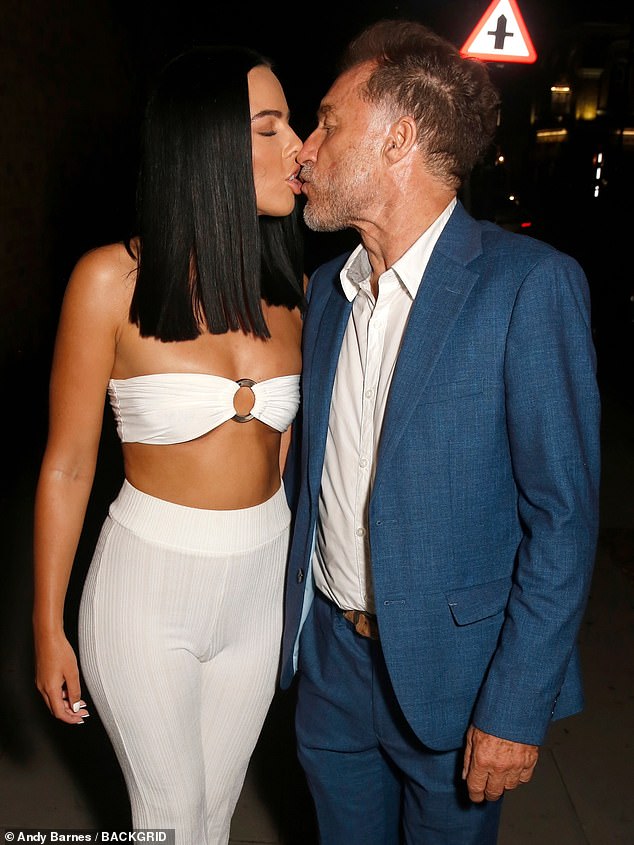 Delighted: Chris and Robyn were the picture of happiness together as they arrived for the lavish birthday celebration 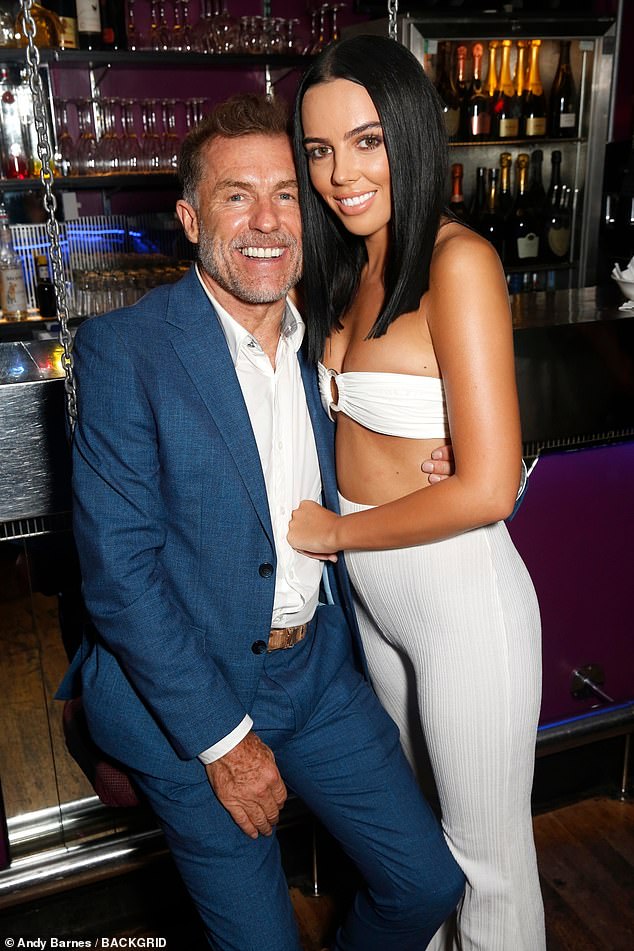 Cosy: The actor and stripper shared an impassioned smooch for cameras as they headed into the venue, ready for a night of cocktails and dancing 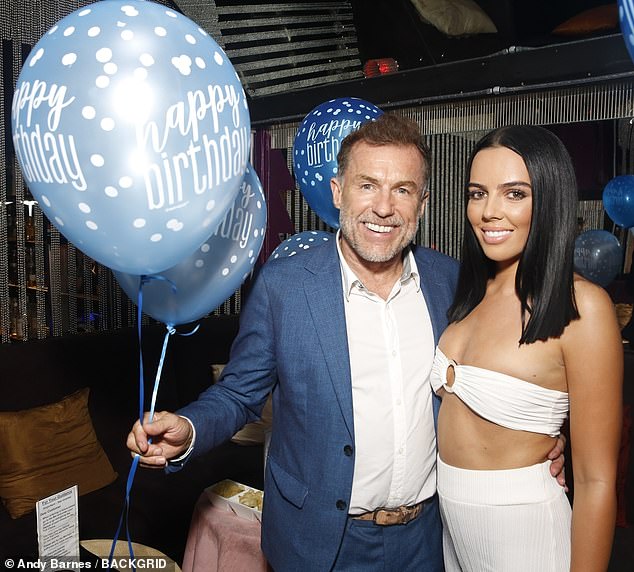 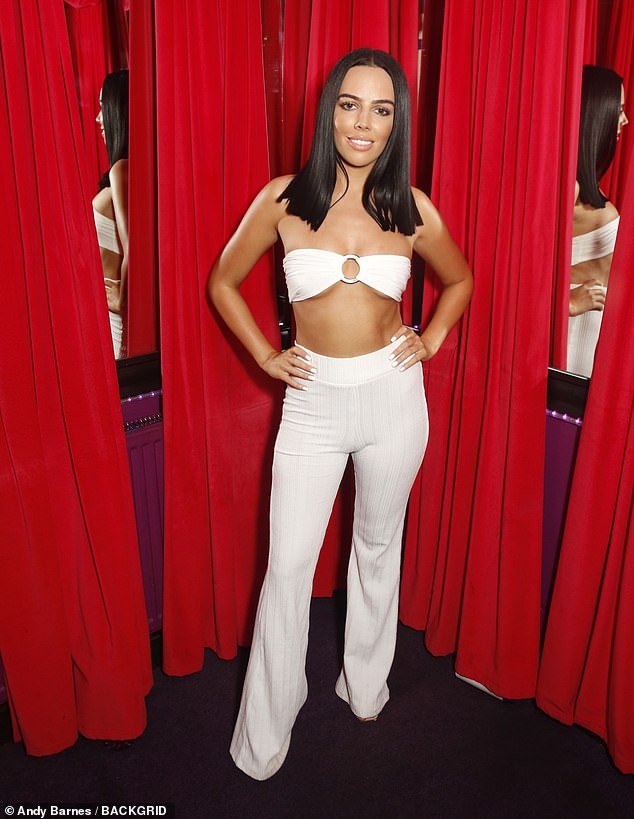 Swing it, sister! She wore her raven locks slickly around her shoulders, adding deft touches of natural make-up to her complexion 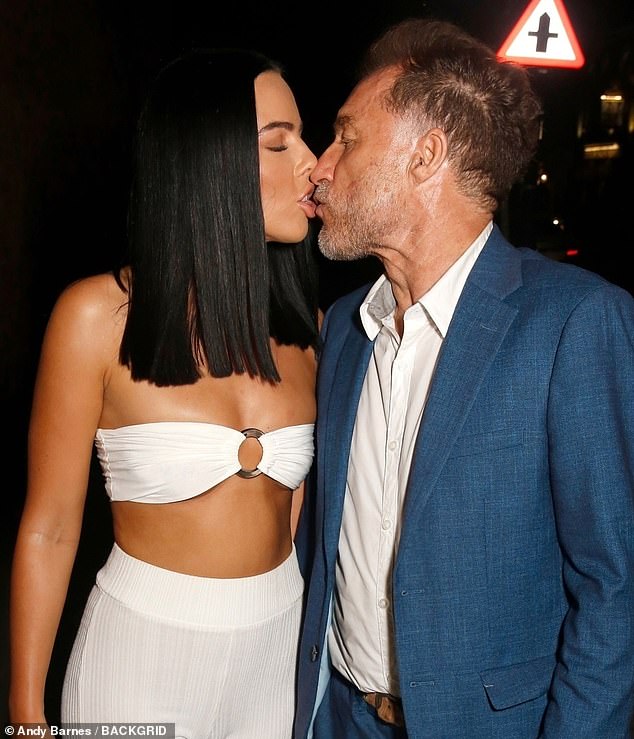 PDA! The couple aren’t afraid to flaunt their apparent desire for one another in public 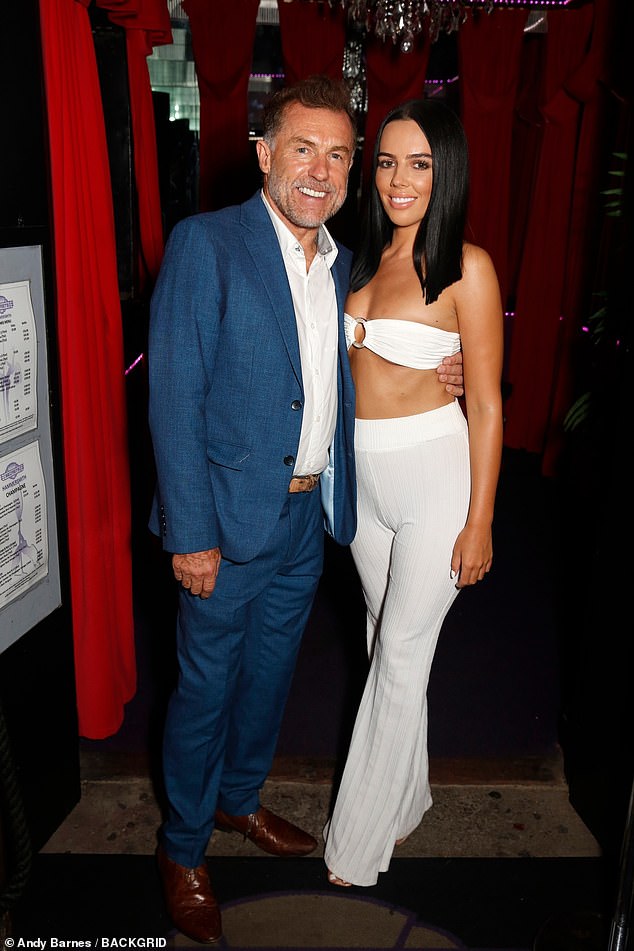 The Sun reported that while the couple were enjoying their stay in Mamaris, his lilo burst.

As the actor is allegedly a weak swimmer, Robyn heroically swam out to save him yet lost her ring in the process.

Insiders stated: ‘Chris was relaxing in the sea on his lilo when it burst and he plunged into the water. He was out quite far and is not the strongest swimmer – fortunately Robyn used to be a lifeguard so jumped in after him to come to his rescue…

‘But as she thrashed about in the waves she ended up losing her new ring. They’re completely devastated…

‘Robyn was understandably inconsolable about it – but she’s obviously happy that at least she was able to save Chris.’ 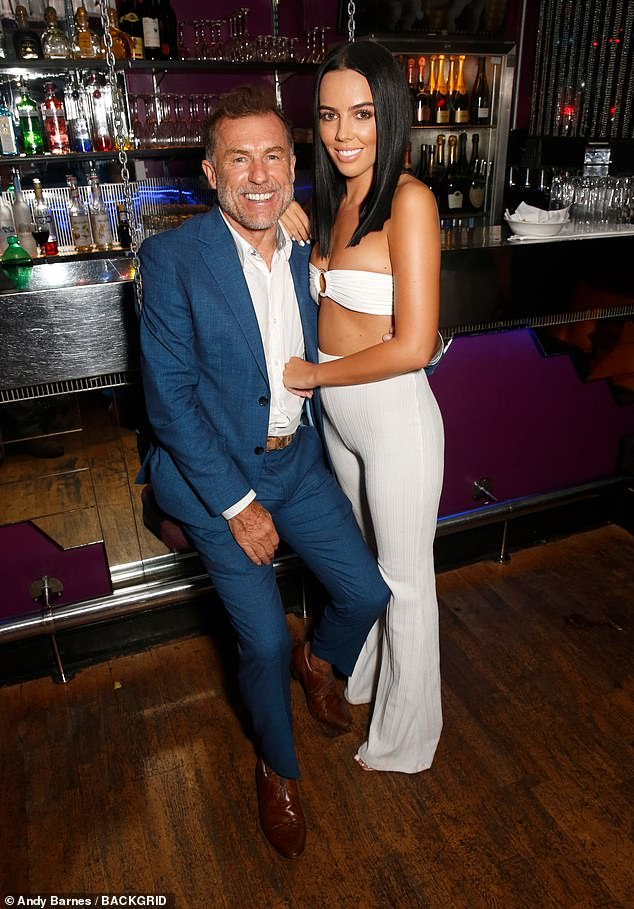 Grin and bare them! The pair beamed for snaps during the evening, showcasing their recently enhanced ‘nashers’

Stepping out: They marked Chris’ birthday while abroad – with their London soiree a chance to celebrate again with their pals in England 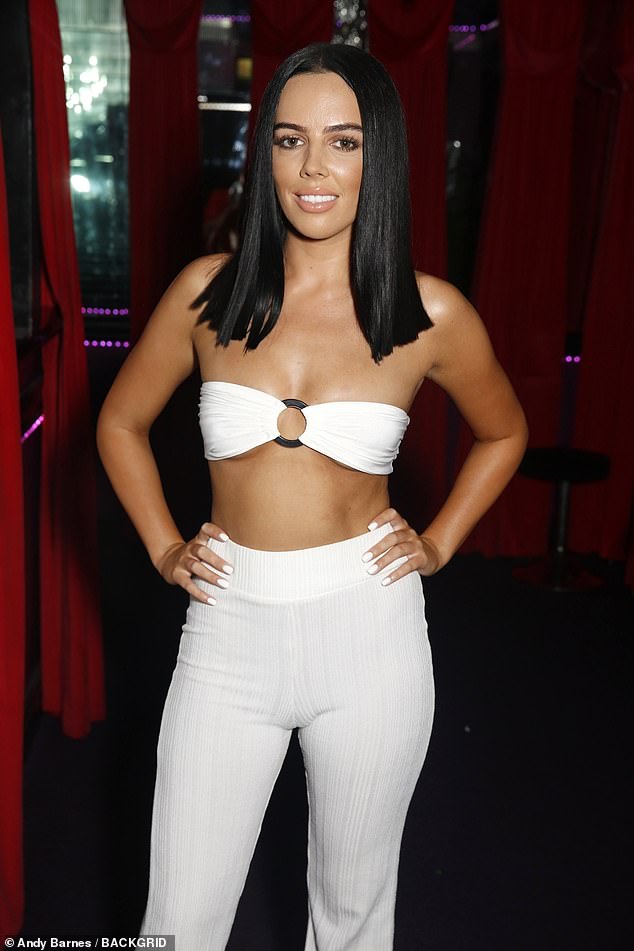 Heroine! Earlier this month Robyn lost her £3,000 engagement ring, after jumping into the sea to save Chris from drowning 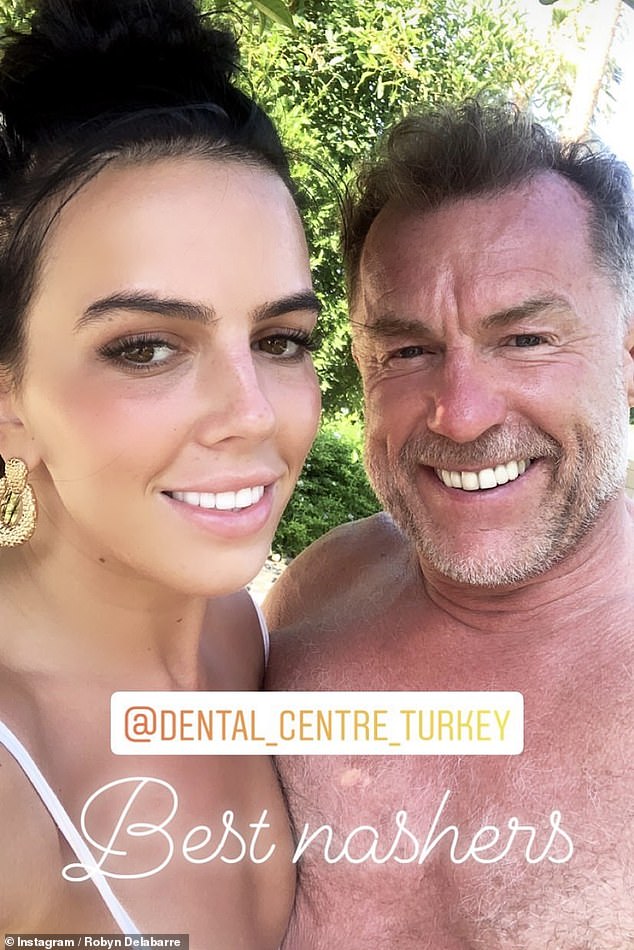 New look: The pair jetted to Turkey two weeks ago  to have their teeth whitened for their wedding 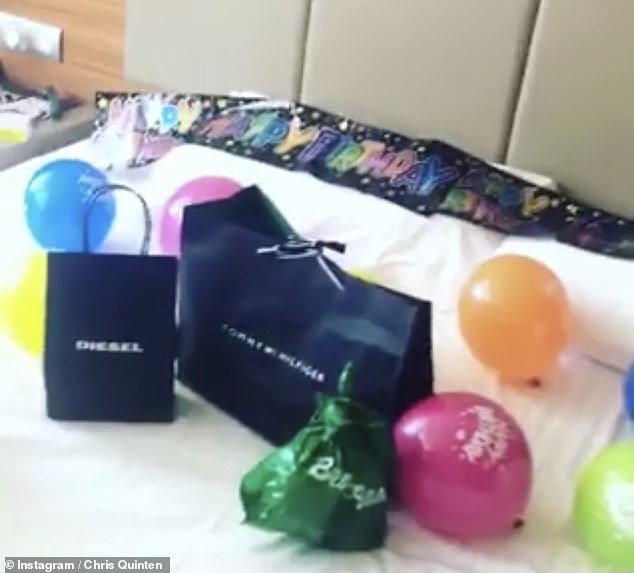 Gifted: The couple enjoyed the Turkish break earlier this month, with Robyn showering her husband-to-be with designer gifts

The duo celebrated their engagement party at The Secret Lounge too, last month. The venue is the place they first laid eyes on each other.

Being Robyn’s senior by 40 years, the stage actor, who played Brian Tilsley on Corrie from 1978 to 1989, has already lived a life before meeting his ‘soulmate’ and is the proud father to three daughters.

He welcomed a daughter, now 30, with ex-wife US TV host Leeza Gibbons, has a 26-year-old daughter from a previous relationship and a teenage daughter, 14, with his former partner Alison Slater. 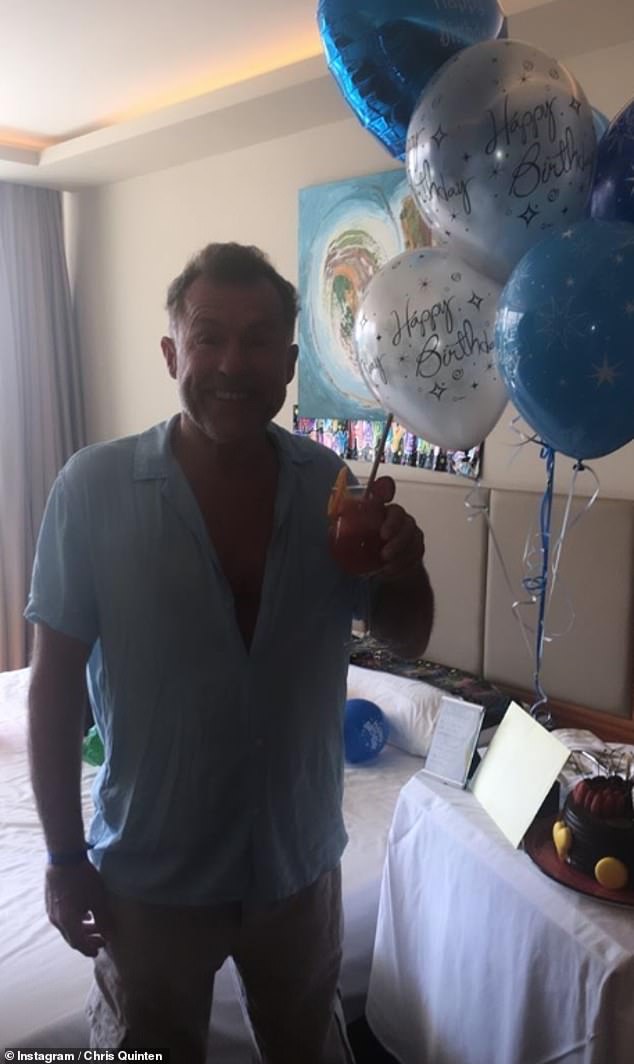 Happy birthday! Chris was grinning from ear to ear as he enjoyed a birthday cocktail in his hotel room after jetting to Turkey with Robyn