And, Chloe Green, 29, and her new beau, 34, lounged on a luxury yacht with friends during St-Tropez holiday, on Saturday.

The Topshop heiress looked sensational in a green and white leaf print bikini set as she soaked up the sun with her new love. 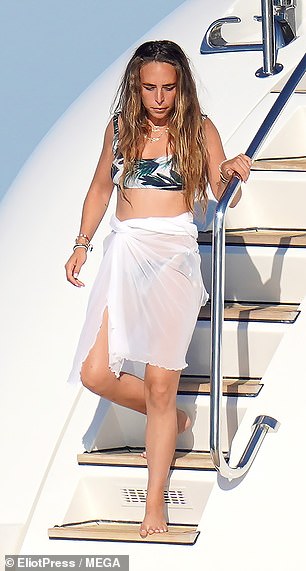 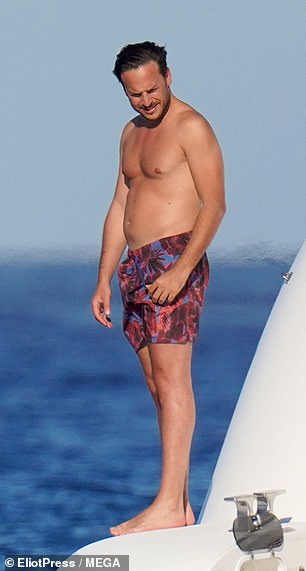 With a sheer white sarong wrapped around her waist, Chloe could be seen walking around the yacht before taking a quick dip in the waters.

Her long dark blonde tresses were styled into beachy waves  and she accessorised with shell necklaces and bracelets.

Manuele bared his bronzed chest as he opted to wear burgundy board shorts for their day at sea.

The duo were joined by pals aboard the yacht, sipping from wine glasses while sitting around chatting. 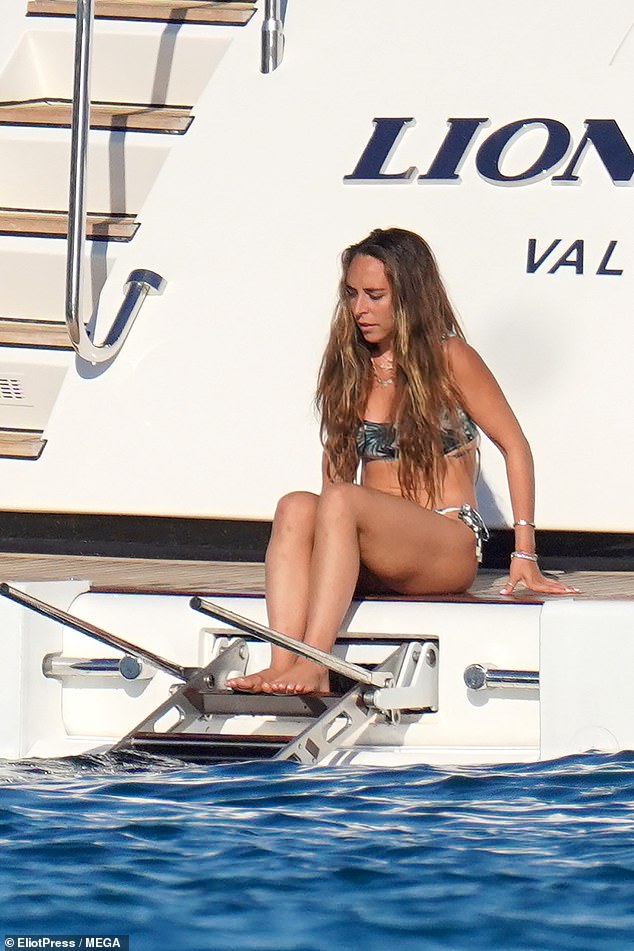 Looking good: The Topshop heiress looked sensational in a green and white leaf print bikini set as she soaked up the sun 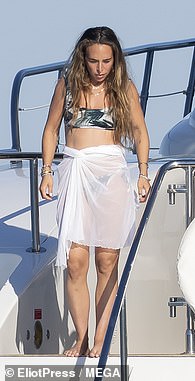 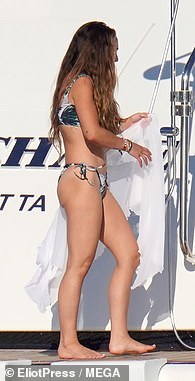 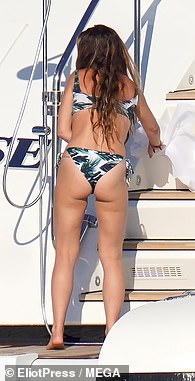 Stylish: With a sheer white sarong wrapped around her waist, Chloe could be seen walking around the yacht before taking a quick dip in the waters 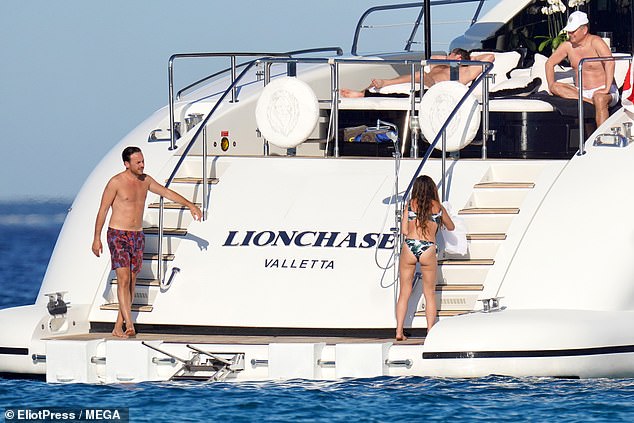 Group getaway: Chloe and Manuele weren’t the only ones enjoying the yacht

The glamorous day in the some comes after MailOnline revealed that her mystery boyfriend is  Italian yacht broker and and father-of-one Manuele Thiella.

Chloe was pictured passionately kissing Manuele, 34, on board her father Sir Philip Green’s £118 million yacht in the South of France on Saturday.

But it won’t have been Manuele’s first voyage as he’s the CEO of company Royal Yacht Brokers, which boasts celebrity clients such as Madonna, Chrissy Teigen and Alicia Vikander.

The businessman has been dating Chloe since 2019 with the pair even spending the festive period together alongside Chloe’s mum Tina, 70, and other ‘best friends and family.’ 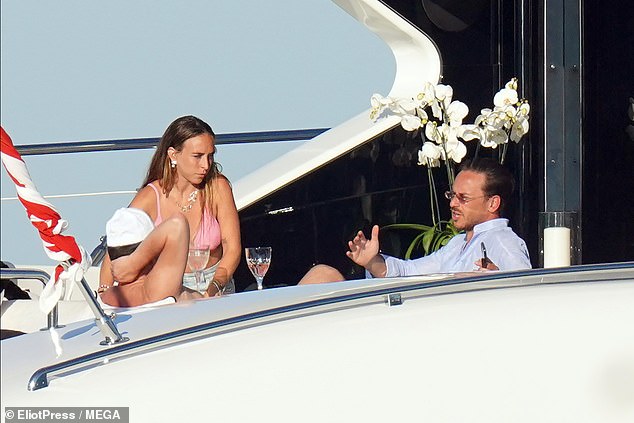 Fun with friends: The duo were joined by pals aboard the yacht, sipping from wine glasses while sitting around chatting

A source said: ‘Chloe has known Manuele for months and they have always been very close friends.

‘They have a lot in common; they’re both parents and are from similar worlds, Chloe is very happy with him. He’s very much been accepted into her family.’

The couple celebrated Chloe’s birthday together in March, with Manuele pictured smiling alongside the heiress and her brother Brandon, 27. 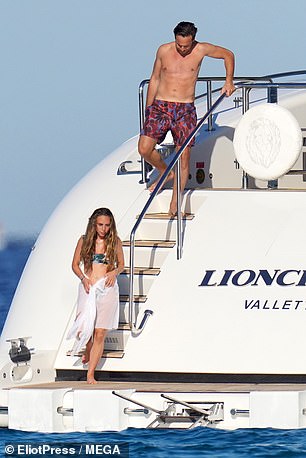 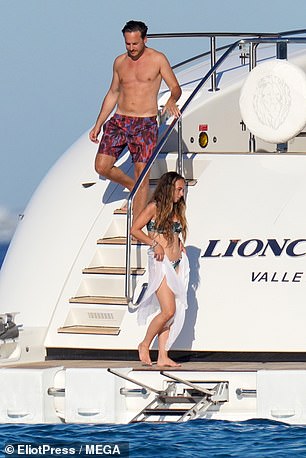 Follow the leader: Chloe led the way with her new beau following on behind

The former Made in Chelsea star shares a two-year-old son, Jayden, with Jeremy, who this weekend was pictured at a Black Lives Protest in Beverly Hills.

Jeremy joined his eldest son Jeremy Jr., 11, in a march over the murder of George Floyd by a white police officer – at the same time Chloe was seen in a bikini on her dad’s yacht.

Chloe’s new boyfriend Manuele has a daughter from a previous relationship with a former partner.

In a Facebook post that shows Manuele with his young daughter, he comments: ‘The only woman I will love forever.’ 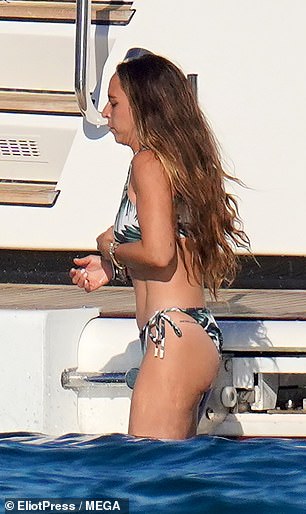 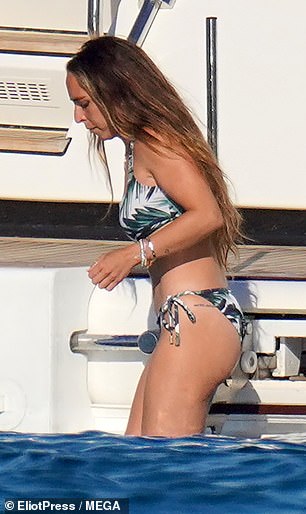 Wow! Chloe showed off her rock hard abs as she braved the cold waters to cool off

Cooling off: The heiress enjoyed a refreshing dip in the blue waters

Manuele, who’s from Milan, appears in a video alongside his business partner Tommaso Chiabra to promote their company, which has its headquarters in Monoco and boasts offices in London, Dubai, Bodrum and the United States.

His partner Tommy, 34, had a rumoured fling with Selena Gomez after the pair were pictured looking close on a yacht together in 2014.

After her split from hot felon Jeremy, Chloe briefly dated Italian polo captain Rommy Gianni, who she was also spotted kissing on board her dad’s super yacht.

Chloe was photographed in Sardina with Rommy last August – just two months after reports of her split from Jeremy.

MailOnline contacted Chloe Green for comment at the time. 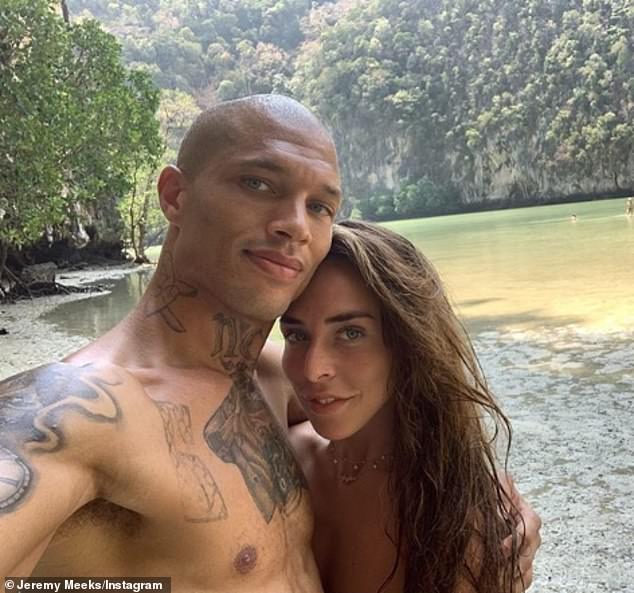 It’s over: Chloe split from hot felon Jeremy, who she has a two-year-old son with, in June 2019 following two years of dating