Charlize Theron reveals she has been single for a ‘long time’ and will never marry as she shares the advice her mother gave her: ‘Don’t take any s***’

Charlize Theron was unveiled as one of Glamour’s Women Of The Year this Tuesday.

The Oscar-winning actress stunned in a white lace Dior dress and sleek black jacket, wearing her trademark blonde hair in a short cropped do. And in Glamour magazine, the 44-year-old chewed over her unconventional career and recalled: ‘I was raised by a mom who was just like: “Don’t take any s***.”‘

Also in her interview, the Oscar winner shared that she has been single for ‘a very long time’ and will never wed. 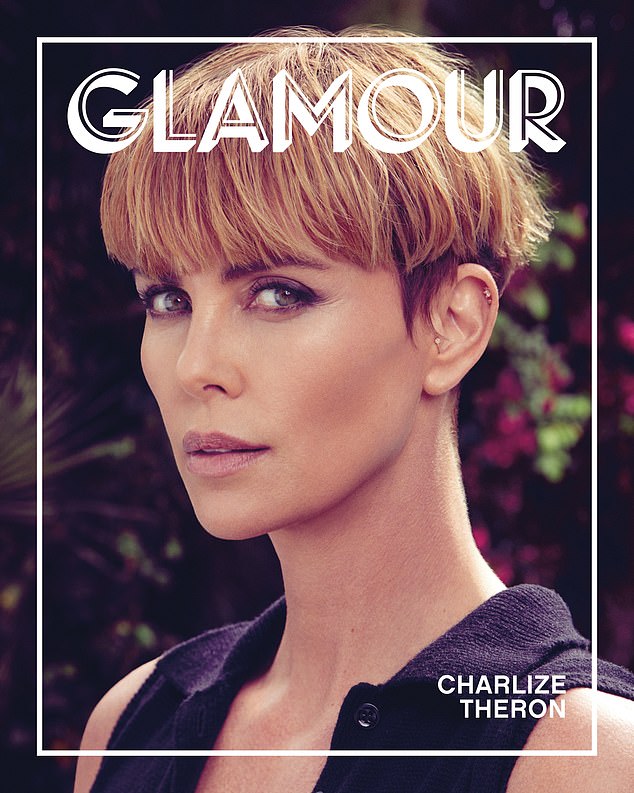 Honoree: Charlize Theron was unveiled as one of Glamour’s Women Of The Year this Tuesday

Charlize shared that her mother Gerda Maritz was unsparingly honest with her, including when her childhood ballet recitals in South Africa were not up to snuff.

‘It was devastating to hear, but I realized that when she said something was good, I could believe her. It was the same thing my whole life,’ said Charlize.

‘She gave me the truth always – the good and the bad equally. I’m trying to do that with my kids,’ shared the movie star.

Charlize, who at 15 witnessed her mother shoot her father dead in self-defense, adopted her children Jackson and August in 2012 and 2015 respectively. 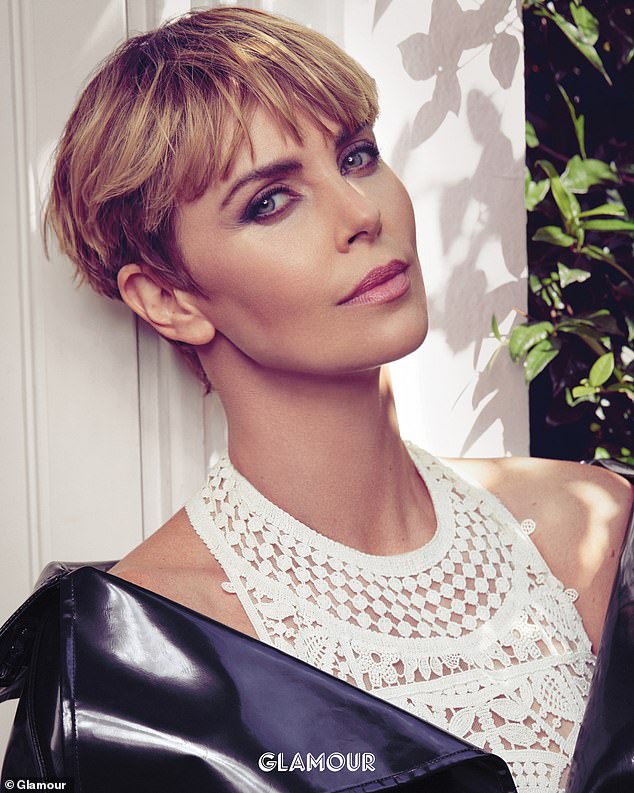 Looking fab: The Oscar-winning actress stunned in a white lace Dior dress and sleek black jacket, wearing her trademark blonde hair in a short cropped do

This April, Charlize announced in the Daily Mail that Jackson, whom she introduced to the public as a boy, is actually a little girl.

She reflected to Glamour on the pressure of raising children in the spotlight and acknowledged: ‘I so wish that I could be the woman that I am and do the job I do and still fully, fully protect my children from all of that, and it’s never going to happen.’

Charlize famously became engaged to Sean Penn in 2014 after having dated him since the previous year, but over the summer of 2015 they split up. 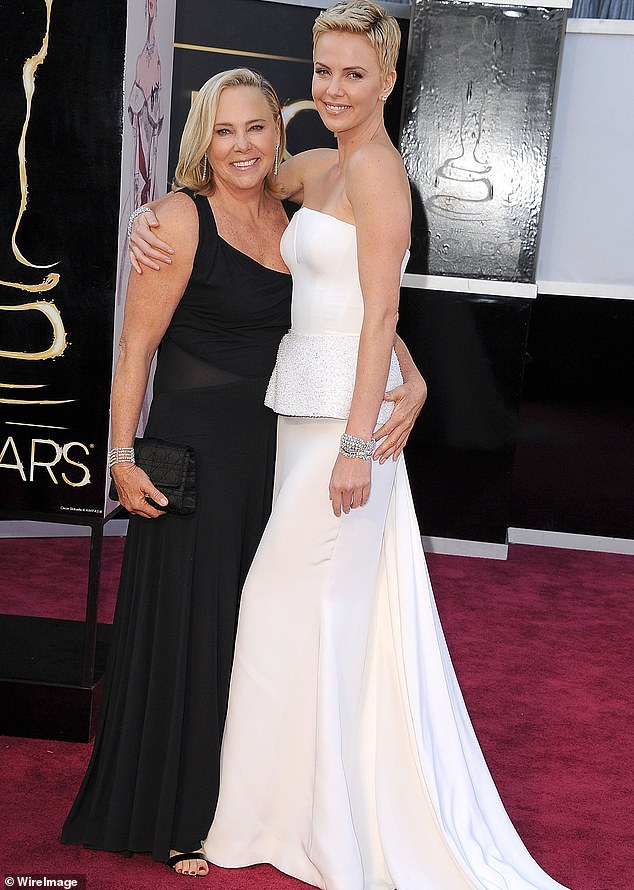 Family matters: In Glamour , the 44-year-old recalled: ‘I was raised by a mom who was just like: “Don’t take any s***”‘; pictured with her mother Gerda Maritz at the 2013 Oscars 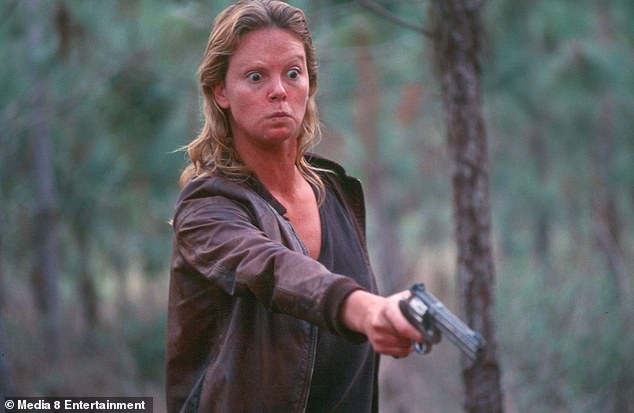 Unconventional: Charlize said her career ‘tends to be projects where people are like: “I don’t know about this Monster movie”‘; she won her Oscar for the film (pictured)

‘I haven’t been in a relationship for a very long time. I never wanted to get married. Those are things that are not hard for me, because they’re innately my truth. I find people are somewhat perplexed by that, and also more with women, right?’

Charlize plays Megyn Kelly in upcoming drama film Bombshell, which is about the Roger Ailes sex scandals. She also produced the film.

The movie lost its financing with a fortnight left to go before principal photography, leaving Charlize in ‘pure panic’ making ‘a lot of phone calls’ to salvage the project.

Yet she shared that some doubt her producing capacity, saying: ‘I think there’s this conclusion that sometimes gets made, like: “It can’t possibly be a f***ing actress that put this thing together.”‘ 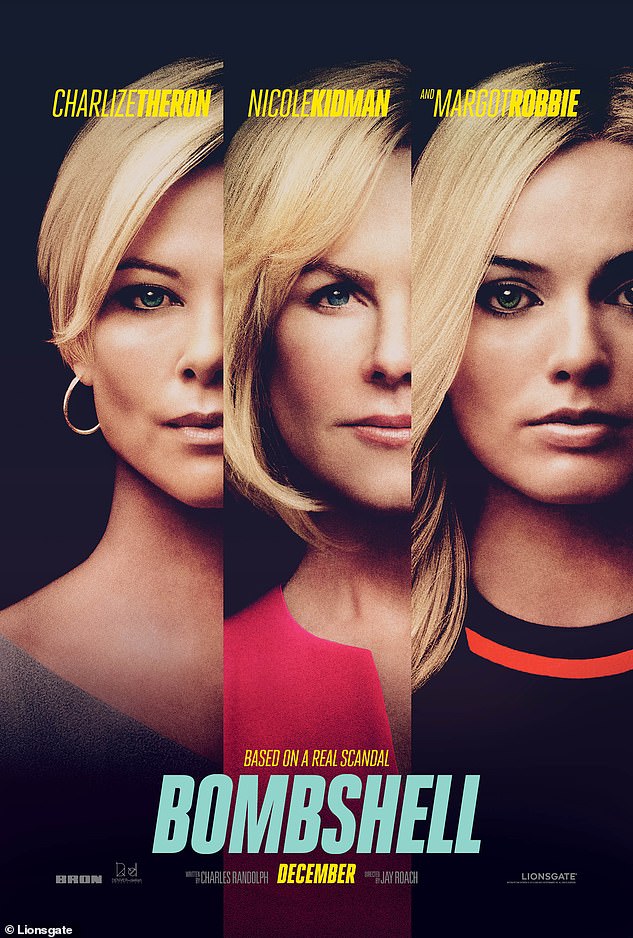 Three blondes: Charlize plays Megyn Kelly in upcoming drama film Bombshell, which is about the Roger Ailes sex scandals. She also produced the film. Also in the movie are Nicole Kidman and Margot Robbie

Charlize, who won her Oscar by transforming garishly into serial killer Aileen Wuornos in Monster, dished her off-kilter career choices.

‘A lot of projects I’ve been involved in are not necessarily projects where everybody has gone: “Yeah, this is going to be great, you should do this!”‘ It tends to be projects where people are like: “I don’t know about this Monster movie. Really?”‘ she said.

Professional triumph ‘definitely doesn’t mean box office,’ and said of her work: ‘If you’re going to do it, let it be on something that actually means something to you.’