Trinny Woodall’s millionaire partner Charles Saatchi, 76, accidentally walks into her livestream NAKED as she shares beauty tips from the bathroom

Trinny Woodall’s partner Charles Saatchi was accidentally filmed naked as the fashion expert recorded her livestream on Facebook amid the UK’s coronavirus lockdown.

In the now-deleted clip from Tuesday, the style guru, 56, treated her social media followers to some fashion and beauty tips when the businessman, 76, popped into frame before heading into the shower.

The This Morning star appeared to ignore the mishap as she continued to detail her skincare routine while broadcasting from their West London home. 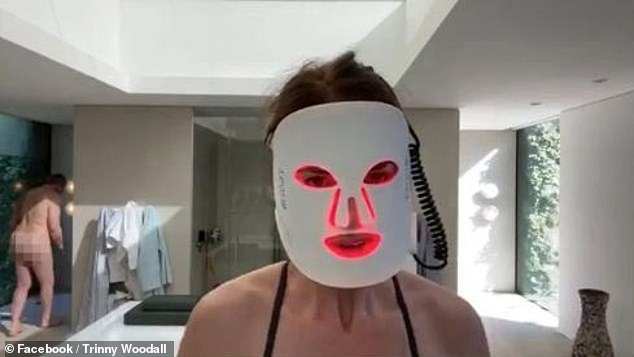 The accident was noticed by a fan, who admitted they weren’t aware of Trinny’s reaction as the media personality covered her face with a £400 LED mask when the art collector appeared.

According to The Sun, a viewer commented: ‘I’m unsure if she knew he was in camera shot but after he walked past she put her hand up to hide that side of the bathroom.

‘She had her mask on so I didn’t see if she was embarrassed or not.’ 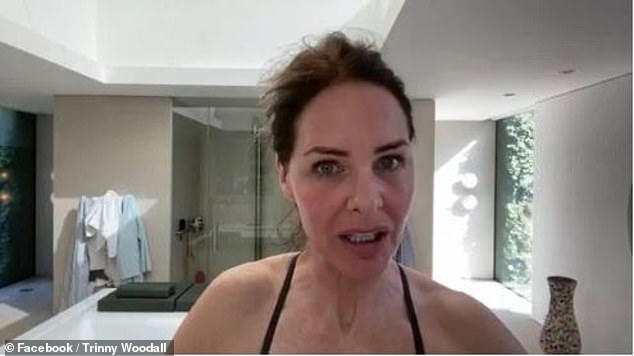 Beauty maintenance: In the now-deleted clip from Tuesday, the style guru, 56, treated her followers to some fashion and skincare tips when the businessman, 76, popped into frame

The TV presenter has been helping her social media followers as the country remains in lockdown, with her informative clips about her favourite products garnering 307,000 views.

The TV chef, 59, was famously seen looking distressed as her then husband grabbed her by the throat, with the images shocking the nation.

Iraqi-British Jewish businessman Charles is the co-founder of advertising agency Saatchi & Saatchi with his brother Maurice.

The pair have a combined fortune of £146 million, according to the Sunday Times Rich List.

Charles is also known for his extensive art collection – which was valued at £200 million in 2003 – and for owning Saatchi Gallery.

He is so reclusive that he famously never attends parties — even those given by himself. 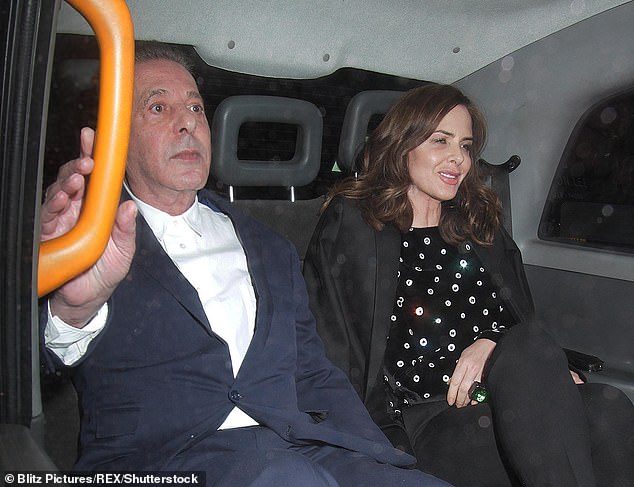 In an interview with The Mail On Sunday, The Body Shape Bible author opened up about motherhood following the death of her ex husband Johnny Elichaoff in 2014.

Trinny, who is a mother to Lyla, 15, and stepmother to her ex Johnny Elichaoff’s son Zak, said: ‘I worry about being a single mother, but I get good counsel from Charles.

‘He has a fabulous daughter Phoebe, who is incredibly gracious and smart. He’s got a great child because he brought her up well.’

Despite making her name as a fashion expert and stylist, the Marylebone native has more recently turned her attention to the beauty world.

The TV star has discussed her fitness regime in the past, which includes brisk walks with bottled water as weights, taking turmeric and a process of pinching and slapping the skin to get rid of water retention.

Speaking in a Facebook video, she explained: ‘My figure for my age is good, but my figure’s fitness compared to five years ago is a fifth of what it was.

‘That’s my main focus. I’m going to get really fit in many different ways.’ 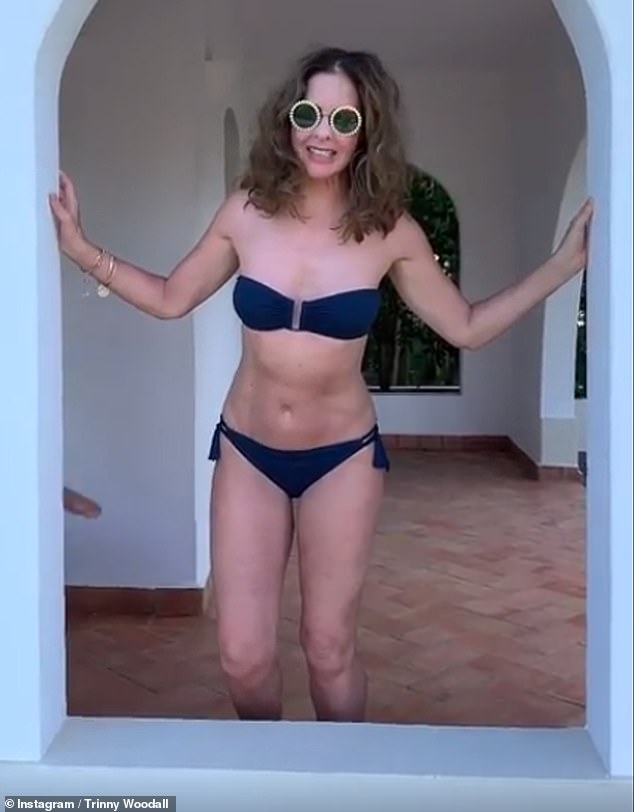 Youthful: The TV star has discussed her fitness regime in the past, which includes brisk walks, taking turmeric and a process of pinching and slapping the skin (pictured in August 2019)