She was born and raised in the bustling streets of New York City.

But for this year’s annual 4th Of July holiday celebration, a pregnant Cardi B decided she would change things up and attend some BBQs in Southern California.

And on Sunday the rapper took to Instagram to update her 98.8 million fans and followers about her first impression of LA BBQ.

Demonstrating her signature sass, Cardi shared a direct message to vegans in the southland, all while decked out in a skin-tight sheer leopard dress. 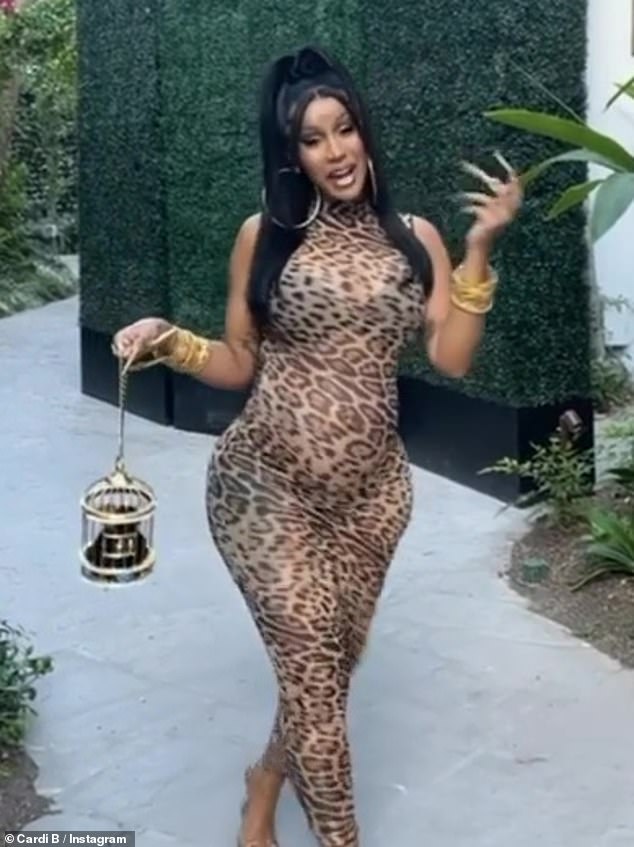 Doing BBQ: Cardi B, 28, flaunted her growing baby bump while giving her first impressions of LABBQ during her 4th Of July celebration on Sunday

In the clip Cardi (born Belcalis Marlenis Almánzar), 28, is taking a casual stroll along a walkway in the animalistic number that easily showcased her growing baby bump.

‘California I went to one of those BBQs today. I didn’t stay home today,’ she began in the video with her usual heavy dose of unique charm and charisma.

It’s at this point that she reassures everyone she’s a meat eater, especially when it comes to her BBQ.

‘I’m not with them vegan burgers because you m*****f***ing Californians, y’all be doing too much.. y’all probably made a f***ing cauliflower hot dog – I’m not with that s**t, Ahhright? Ahhright,’ she explains with loads of playful attitude.

With her last words, Cardi walks out of the view of the camera, while still using her hands and fingers as communication devices.

Her trademark long fingernails were in full view during her honest and fun rant. 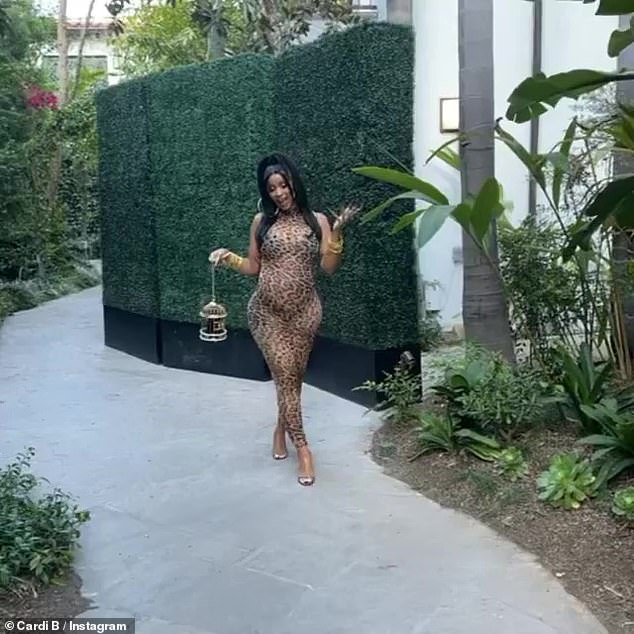 Attitude: In the clip Cardi (born Belcalis Marlenis Almánzar), 28, is taking a casual stroll along a walkway in her animalistic number that easily showcased her growing baby bump 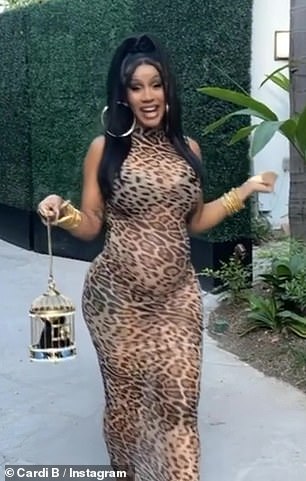 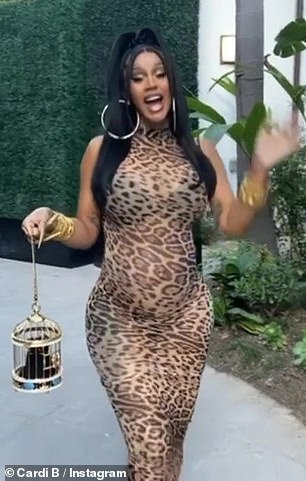 Tasty: The rapper revealed she decided to attend some BBQs in LA for the first time 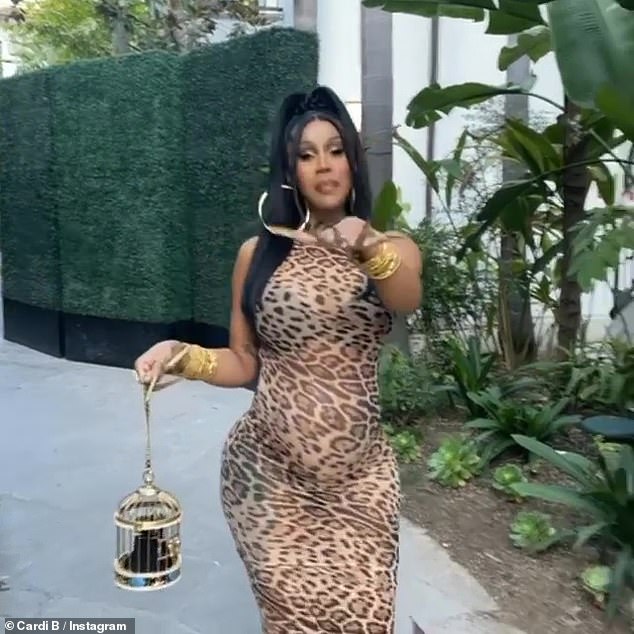 Working it: Cardi showed off her baby bump in a sheer leopard dress 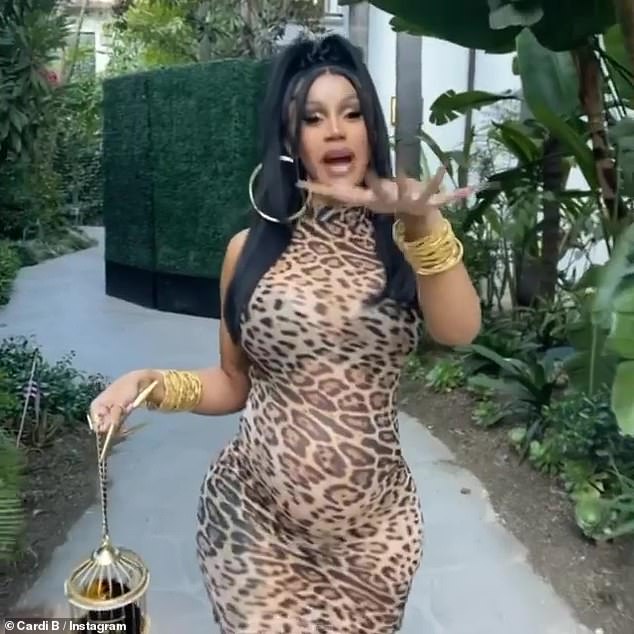 Sass factor: With loads of charisma and attitude, Cardi said she wanted no part of ‘a f***ing cauliflower hot dog – I’m not with that s**t, Ahhright? Ahhright’

The Grammy winner’s overall look also included her long dark tresses pulled into a a stylish high ponytail and strands of hair hanging around the frame of her face.

She also carried her $20,000 Chanel Bird Cage bag, which was a Valentine’s Day gift from her husband of nearly four-years, Offset.

‘Let’s see what these LA bbqs hitting for,’ she wrote in the caption of the short but straight to the point video.

Cardi B announced she was pregnant with her second child last month. She and husband Offset already share a two-year-old daughter named Kulture. 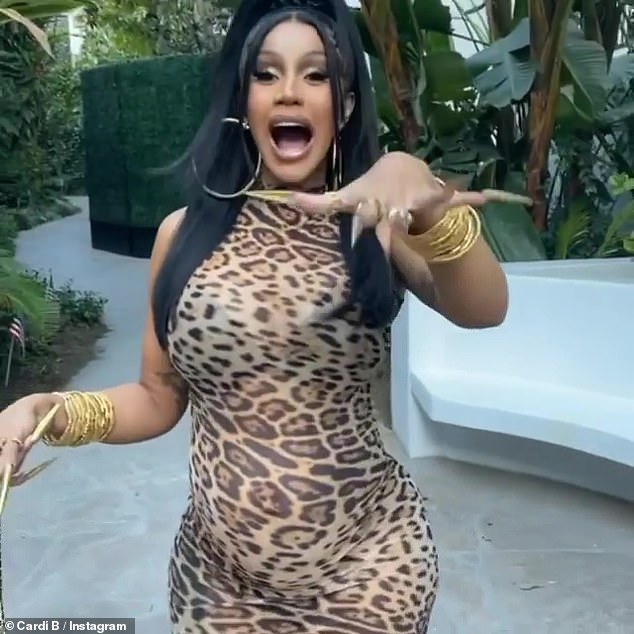 Baby fever: Cardi B announced she was pregnant with her second child in June