Cardi B is lavished with SIX Chanel bags and romantic display of roses by husband Offset ahead of Valentine’s Day: ‘This is why we keep having kids!’

Cardi B was showered with roses and Chanel bags by her husband Offset as an early Valentine’s Day gift on Sunday.

The I Like It songstress, 29, posted photos of the floral arrangement awaiting her when she and Offset returned home from the Super Bowl.

Three massive, heart-shaped arches of roses sat in their living room, and her pool was completely covered in petals. 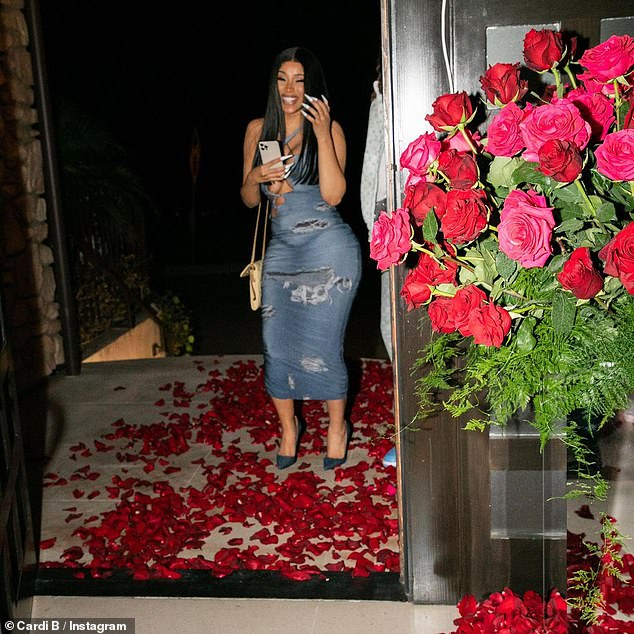 Feeling the love! Cardi B was showered with roses and Chanel bags by her husband Offset as an early Valentine’s Day gift on Sunday

‘My day went like this yesterday… I love you my baby @offset,’ Cardi captioned the images, posted Monday.

The images showed Cardi, clad in a skin tight jean dress, arriving home to the sight with a look of surprise on her face.

Petals graced the hallway floors, candles were arranged around various rose displays, and Cardi was even gifted six Chanel bags.

Cardi could hardly contain her enthusiasm – or expletives – as she expressed her appreciation for her gifts on her Instagram Stories. 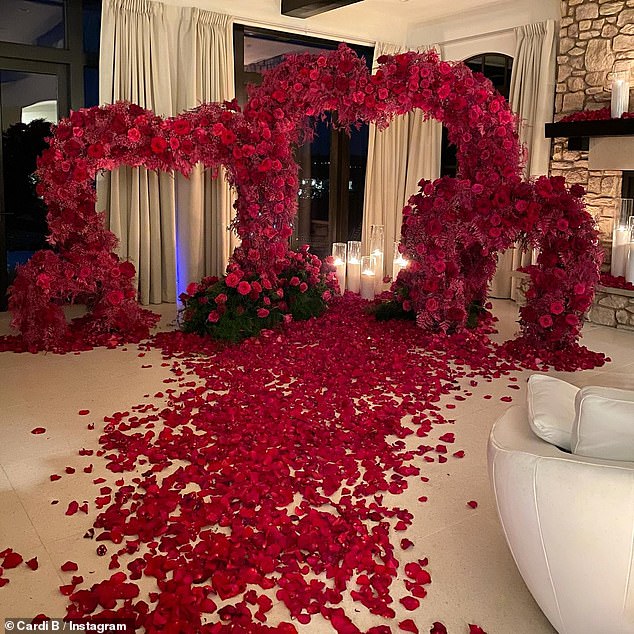 Be mine! Three massive heart-shaped arches were placed in her home beside an arrangement of candles 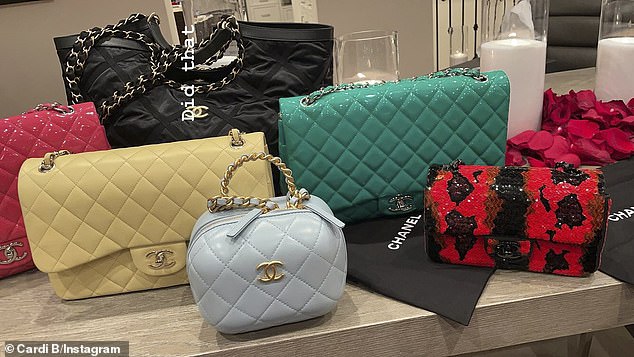 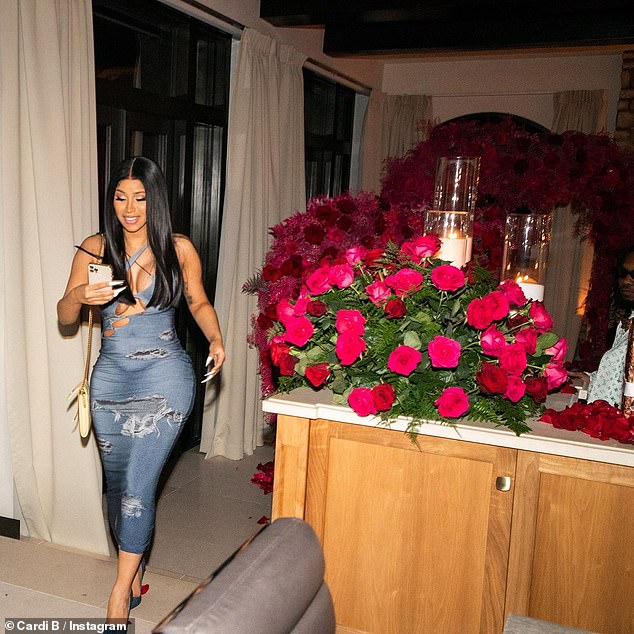 Wow! Cardi explored her house which had been decked out in roses

She also cracked a baby making joke as she showed off their bed, which also had rose petals scattered across it.

‘This is why we keep having kids!’ she teased. 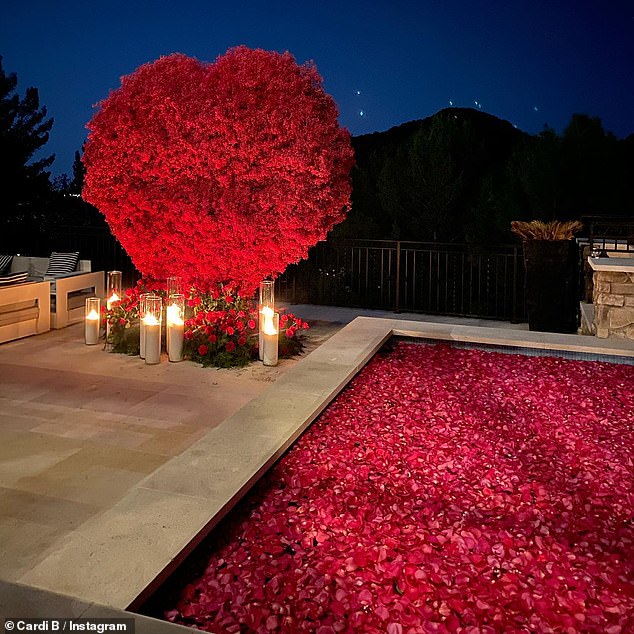 Making a splash! Even the pool was filled with rose petals 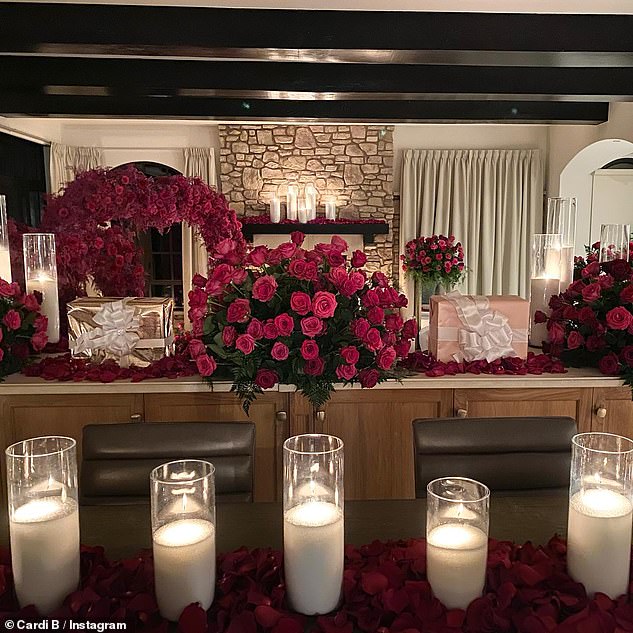 So romantic: Candles were lit throughout the house when Cardi arrived home 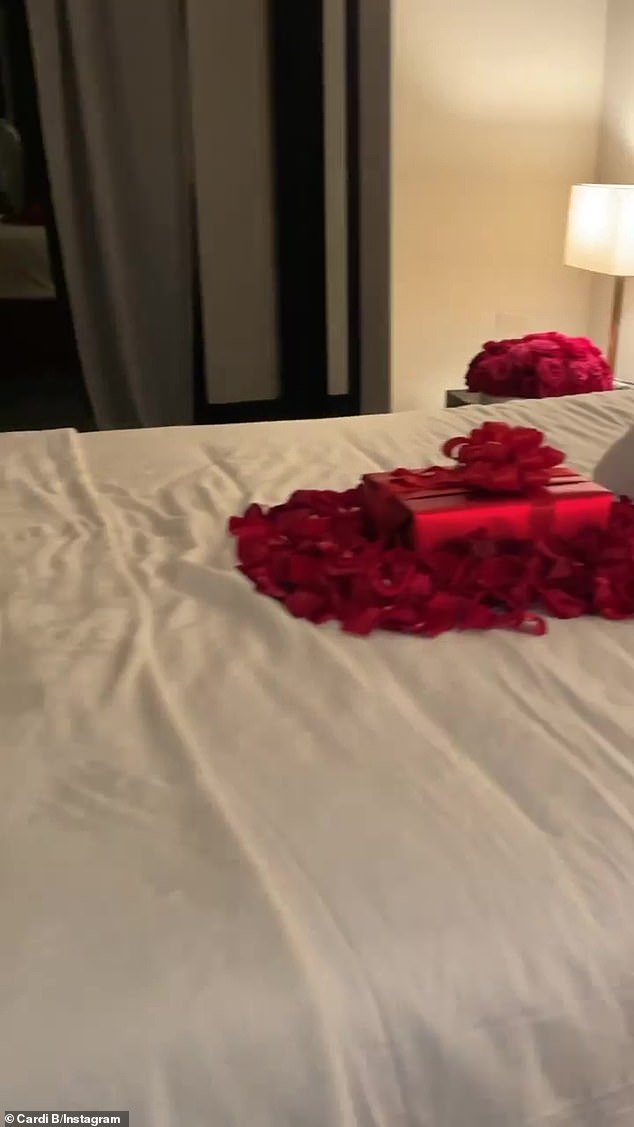 ‘This is why we keep having kids!’ Cardi teased as she admired the roses on their bed

Cardi could not believe her eyes as she was gifted an astounding six Chanel purses, including one not available in the United States.

‘That’s Dubai, it’s not in America. Confirmed,’ Offset said of a red and black one Cardi was holding.

The fun didn’t stop there, as Cardi was also treated to a lavish Valentine’s Day brunch consisting of red pancakes, biscuits, shrimp, and fruit on Monday.

‘We got the Valentines pancakes,’ Offset remarked. 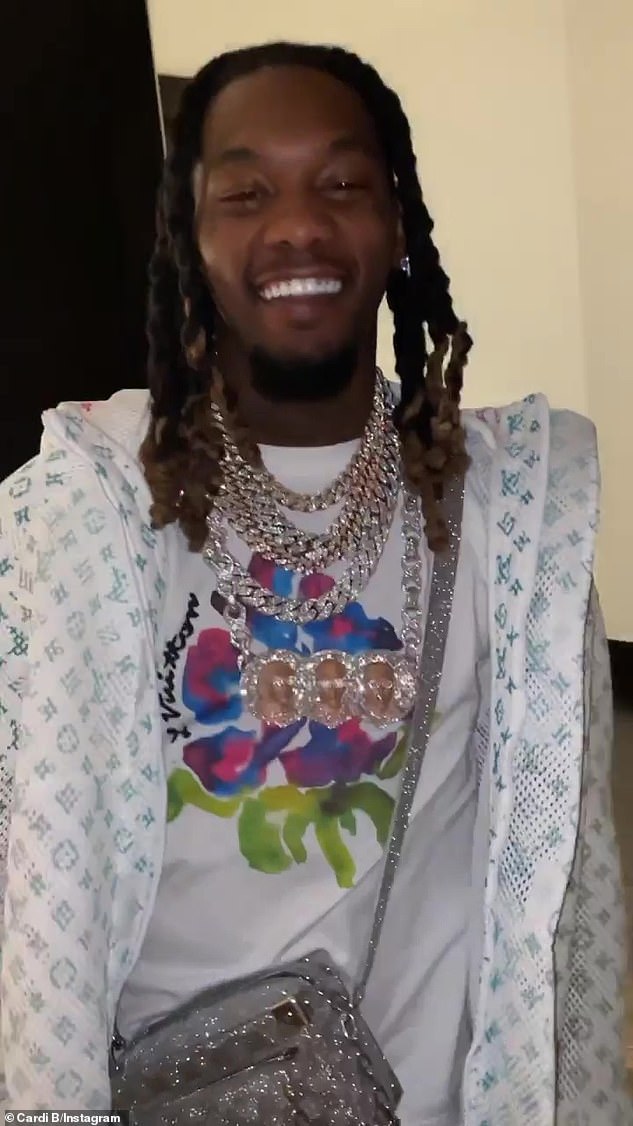 Rarity! ‘That’s Dubai, it’s not in America. Confirmed,’ Offset said of a red and black one Cardi was holding 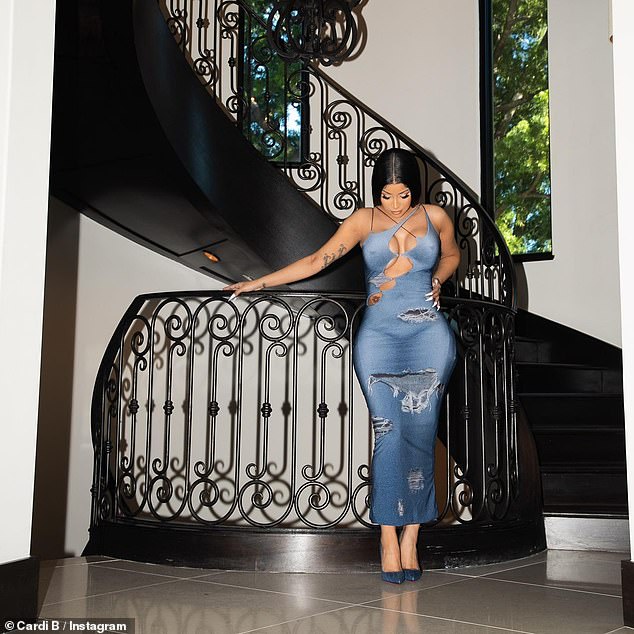 She has great jeans! Cardi wowed in a figure-hugging jean dress 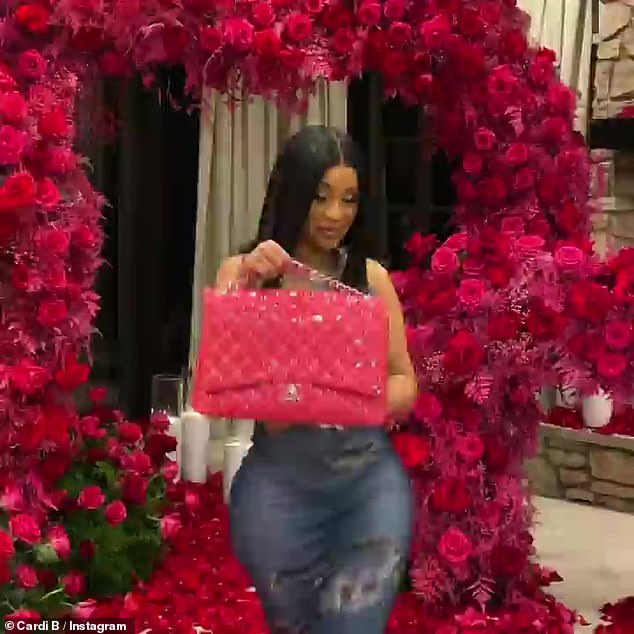 Spoiled! Cardi could not believe her eyes as she was gifted an astounding six Chanel purses, including one not available in the United States

It recently emerged that Cardi and Offset had their wedding date tattooed on one another’s hands for a segment that will be aired on her reality show Cardi Tries.

The New York native and Offset got the ink – which reads 9/20/17 marking their wedding date of September 20, 2017 – this past December, TMZ reported on Thursday.

The musical artists, who share daughter Kulture, three, and a five-month-old son, drew the tattoo designs the other received, and the dates line up when the couple hold hands, according to the outlet. 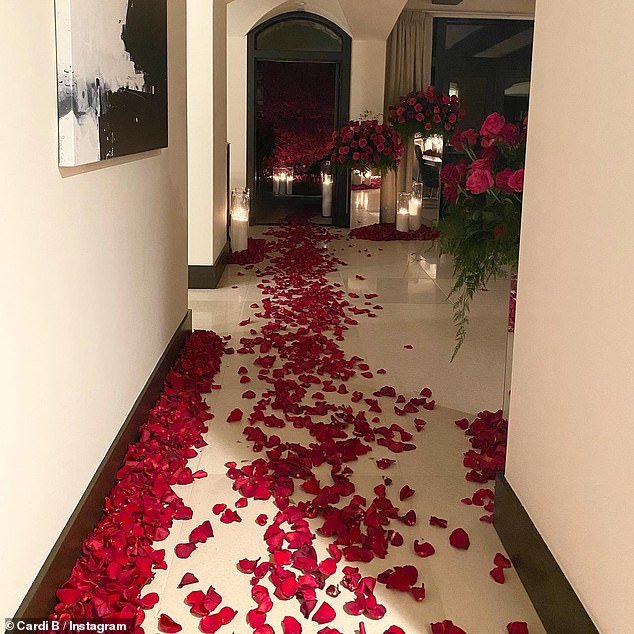 Quite the entrance! Rose petals were scattered across the tile floor 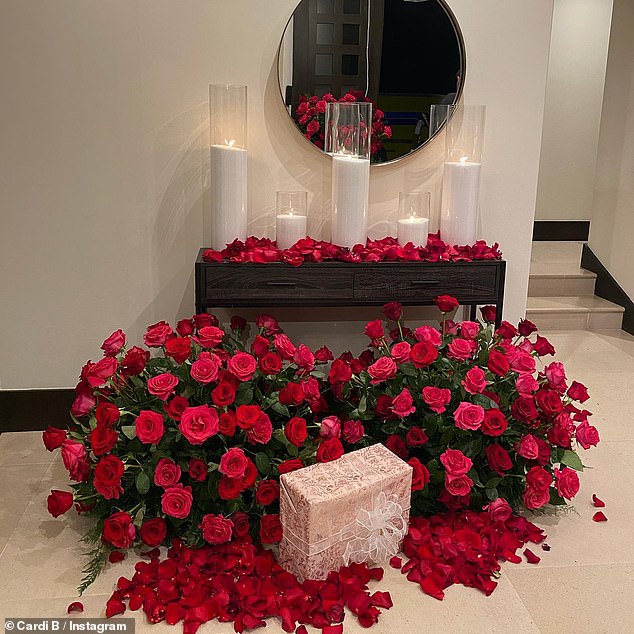 Open it! A beautifully wrapped gift sat beside the floral display

The outing marked the first time tattooing another person for both Cardi B and Offset, the outlet reported, noting that they were taught about the craft by celeb tattoo artist Nikko Hurtado, who was on hand for the occasion.

The musical superstar made headlines about ink last month when she took to Twitter to say there was a small chance she would publicly announce the name of her son with a tattoo on her face.

‘Random but ….I’m 1% close too tatting my sons name on my face….I really really wanna do it!’ she tweeted, later adding that she would want a tattoo on her jaw.

Offset has a tattoo on his jaw of Kulture’s name, as well as two other children he has from past romances, on his shoulder and face.

The couple have past made headlines for their creative shows of affection and expensive gift exchanges.

The segment featuring the tattoos will be aired on Cardi Tries, which will begin streaming Friday at 9 a.m. PST on Instagram, Messenger and Facebook Watch. 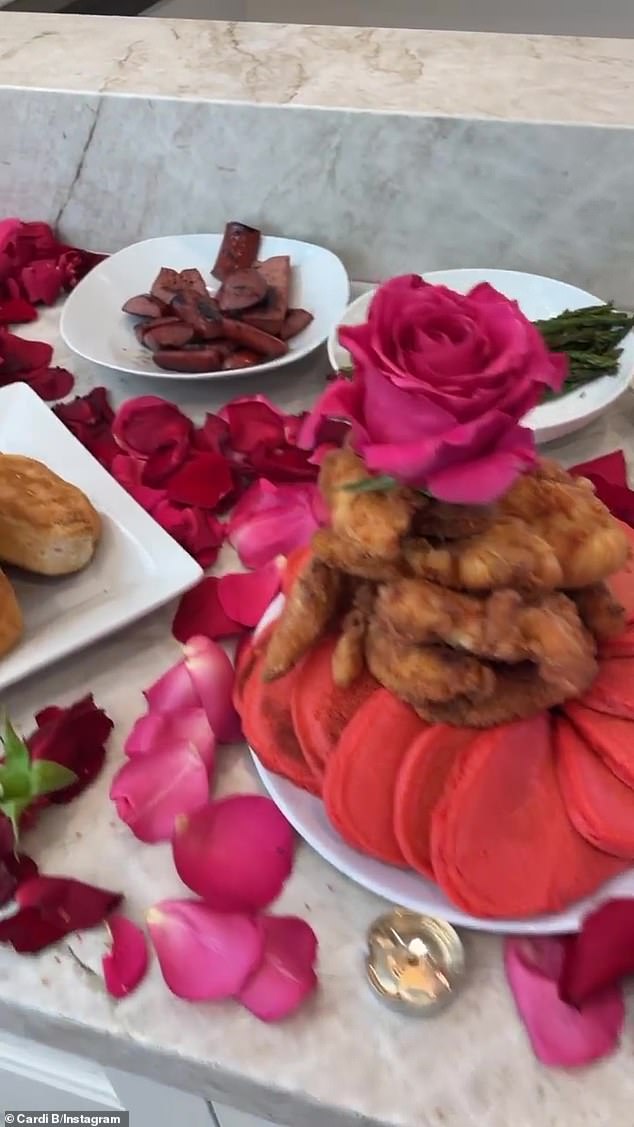 Yum! Cardi was treated on Valentine’s Day with a lavish brunch consisting of red pancakes, bacon, biscuits, shrimp, and fruit