‘Your lifelong privilege is showing’: Caitlyn Jenner SLAMMED by Patricia Arquette, Bradley Whitford and more for discussing homelessness crisis from her airplane hangar in Malibu

Republican candidate for California Governor Caitlyn Jenner was slammed by celebrities this week, when a clip of her talking about homelessness with Sean Hannity on Fox News went viral.

Caitlyn, 71, bemoaned that her rich friends are fleeing California because of homeless people during her first interview since she announced her run, which was conducted inside the privileged setting of her airplane hangar in Malibu.

The irony was not lost on stars such as Patricia Arquette, Bradley Whitford, and even trans actress Jen Richards who appeared alongside Jenner on her E! reality show I Am Cait. 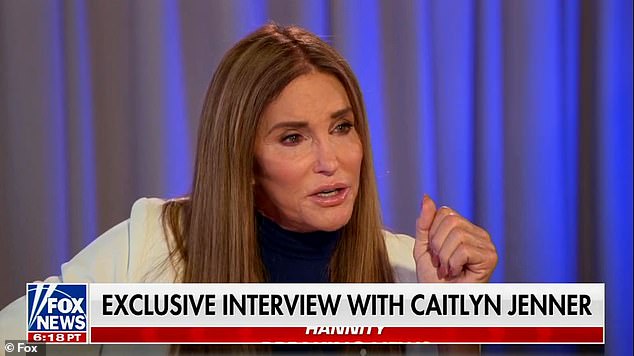 Tone-deaf: Caitlyn Jenner has been slammed by Patricia Arquette, Bradley Whitford and more for discussing homelessness from her airplane hangar in Malibu, on Fox News Wednesday

‘She can put out her 20 point homeless plan. Anytime now…,’ Oscar-winner Arquette tweeted in response to the viral clip.

Meanwhile, the Handmaid’s Tale star Whitford wrote: ‘Kissing the a** of an audience that refuses to acknowledge your truth while throwing the homeless under the bus and kissing the ass of the richest %.0003 of the population deserves a gold medal in the decathlon of morally bankrupt political pandering.’

Whitford added: ‘Private jet owners are the victims. Because they are subjected to the specter of homelessness through the tinted windows of their limousines. You’re a great humanitarian.’ 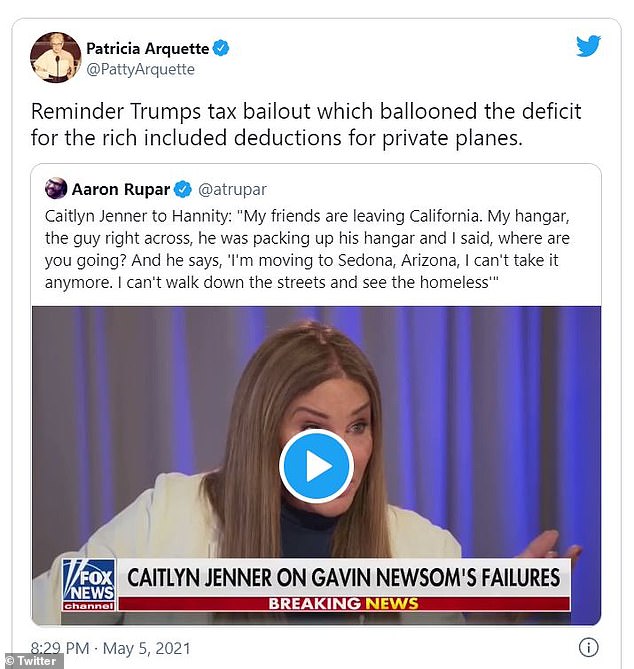 Not impressed: Oscar-winning actress Patricia Arquette was quick to take aim at Caitlyn for her comments about homelessness 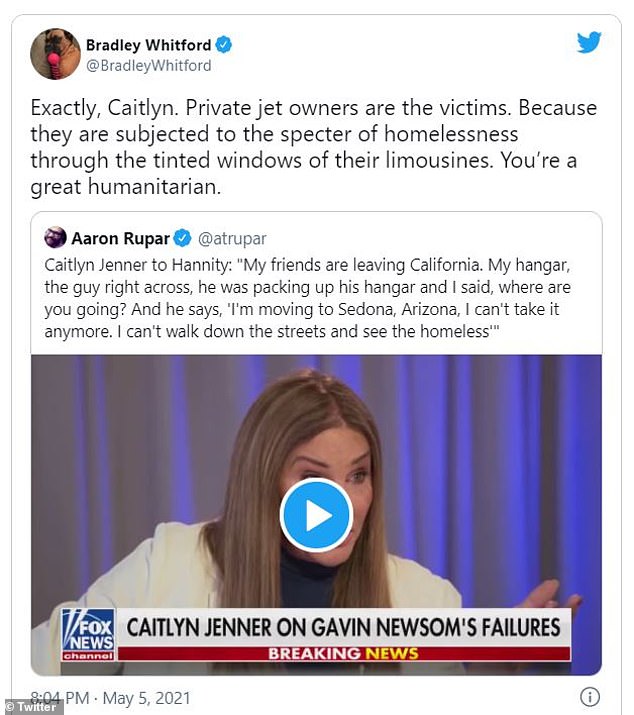 Jenner had regaled a story where she was sitting at her Malibu hangar and a fellow private plane owner told her he was upping sticks from the Golden State.

The man told her he was headed for a new life in Arizona because he ‘can’t take it anymore’ walking down the streets and seeing homeless people.

‘My friends are leaving California,’ she told Hannity Wednesday night. ‘At my hangar, the guy right across, he was packing up his hangar. And he says, ‘I’m moving to Sedona, Arizona. I can’t take it anymore. I can’t walk down the streets and see the homeless.’

Jenner said she wants to ‘stay and fight’ for the state rather than join others in the exodus from the state, saying: ‘I don’t want to leave. Either I stay and fight or I get out of here.’ 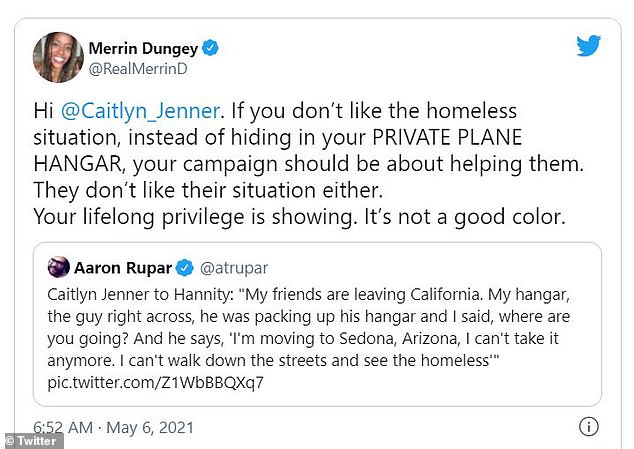 Not holding back: The King of Queens actress Merrin Dungey also attacked Caitlyn for giving an interview from her own airplane hangar 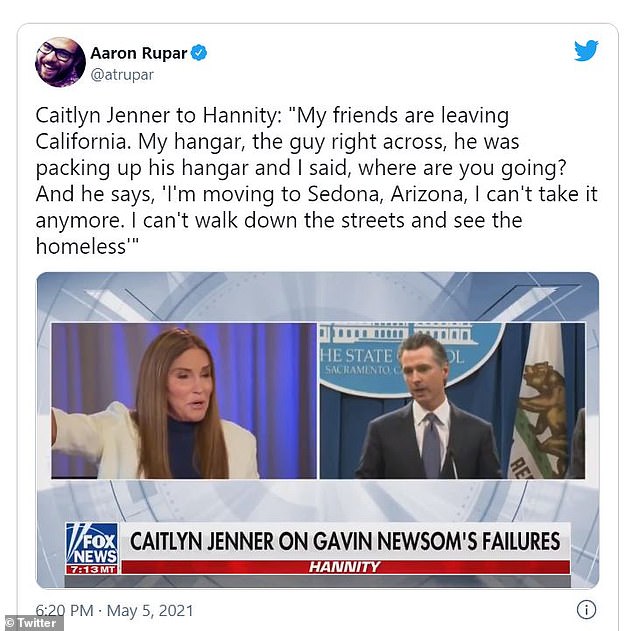 Going viral: Many celebrities responded on Twitter to this clip posted by journalist Aaron Rupar

Billy Eichner tweeted after the show ‘Caitlyn is the enemy’ adding: ‘She could’ve been such a force for good … such a missed opportunity… oh well f*** her too’

Trans actress Jen Richards fumed on Twitter: ‘Did she … just say … that the guy with private airplane hanger next to hers is tired of stepping over the homeless … as if the problem is the homeless and not the fact they BOTH OWN PLANES and are complaining about having to look at HOMELESS PEOPLE?!?’

She continued, ‘My friend, not on Twitter, summed it up best: ‘My rich friends are leaving cause they don’t want to see poor people that are poor because we don’t put money in social services cause my rich friends don’t pay tax.'” 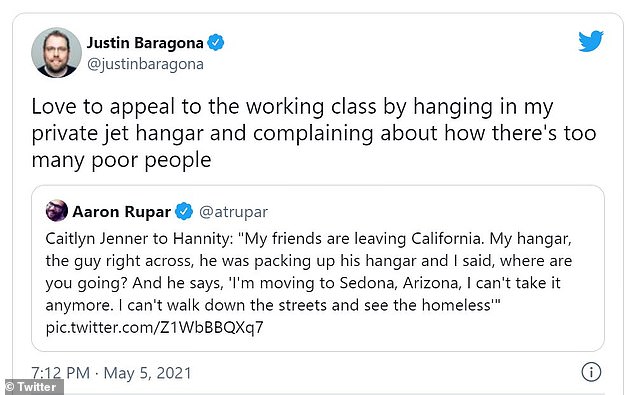 Hypocrisy: The comments from Caitlyn sparked a pile-on from Twitter users this week 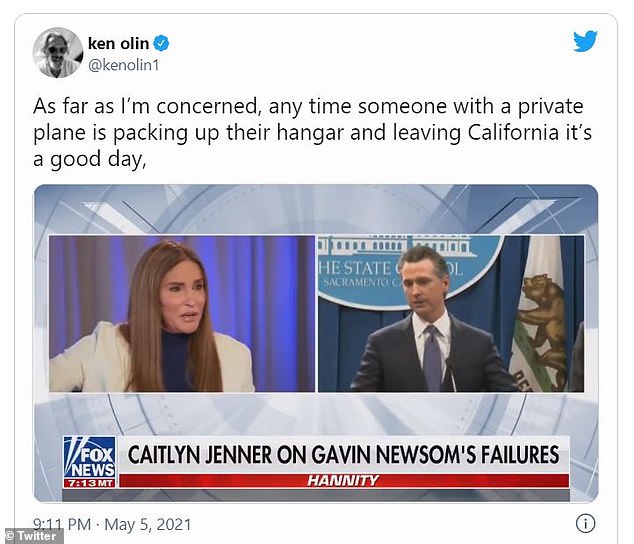 Survivor contestant Zeke Smith – who is trans – roasted the fellow reality star tweeting: ‘I’m just like you, normal Californians. I’m a multi-millionaire Olympian turned Reality TV star who got away with vehicular manslaughter and thinks folks who own airplanes shouldn’t have to look at poors.’

The King of Queens actress Merrin Dungey tweeted: ‘Hi @Caitlyn_Jenner. If you don’t like the homeless situation, instead of hiding in your PRIVATE PLANE HANGAR, your campaign should be about helping them.’

She added: ‘They don’t like their situation either. Your lifelong privilege is showing. It’s not a good color.’ 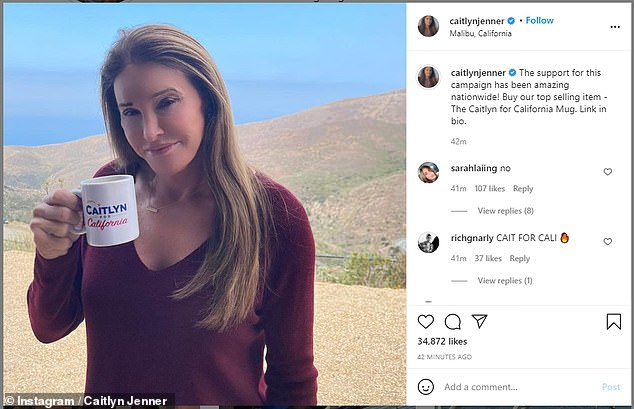 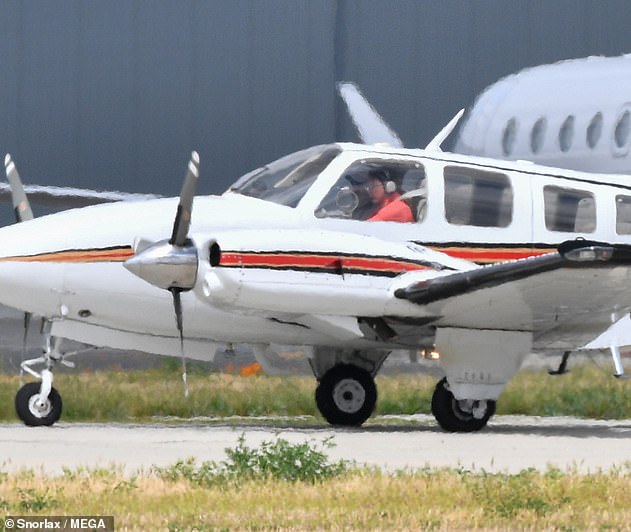 Jenner regaled a story where she was sitting at her Malibu hangar and a fellow private plane owner told her he was upping sticks from the Golden State. The reality star is seen flying her private plane in California in April

Jenner has also routinely been slammed by seasoned politicians, including Congressman Ted Lieu, who tweeted: ‘California grew by 2.4 million people the last 10 years. Also, unlike you, Dems are focused on the 99% of people who don’t own planes or hangars. And you know what’s going to help reduce homelessness? The #AmericanRescuePlan, which your party opposed.’

Despite her conservative stance on homelessness, Jenner shied away from calling herself a Republican in the interview, instead saying she regards herself as a ‘disruptor.’

California has long been ravaged by a homelessness crisis, having the highest number of homeless people of all US states.

The number of people living on the streets has skyrocketed by more than 24 percent in the last two years alone.

A total of 161,548 homeless people were recorded in the state in January 2020, up from 129,972 in January 2018, according to data released by US Department of Housing and Urban Development in March.

A total of 70 percent of these people were considered ‘unsheltered,’ meaning they lived on sidewalks, in tent encampments, abandoned buildings, in cars or anywhere else outdoors.

Los Angeles has long been one of the hardest hit areas with the number of homeless people rising steadily from around 40,000 in 2011.