Brooklyn Beckham’s repeatedly professed love for Nicola Peltz was well in evidence on Wednesday as they shared a kiss during a family holiday in the Caribbean.

The couple, who are expected to marry this year after the COVID-19 pandemic forced them to cancel their summer 2020 wedding plans, were inseparable while out in the Turks and Caicos’ Islands.

Taking advantage of balmy spring temperatures, Brooklyn, 22, wore a simple T-shirt and sunglasses while leaning in to plant a kiss on his actress girlfriend’s lips. 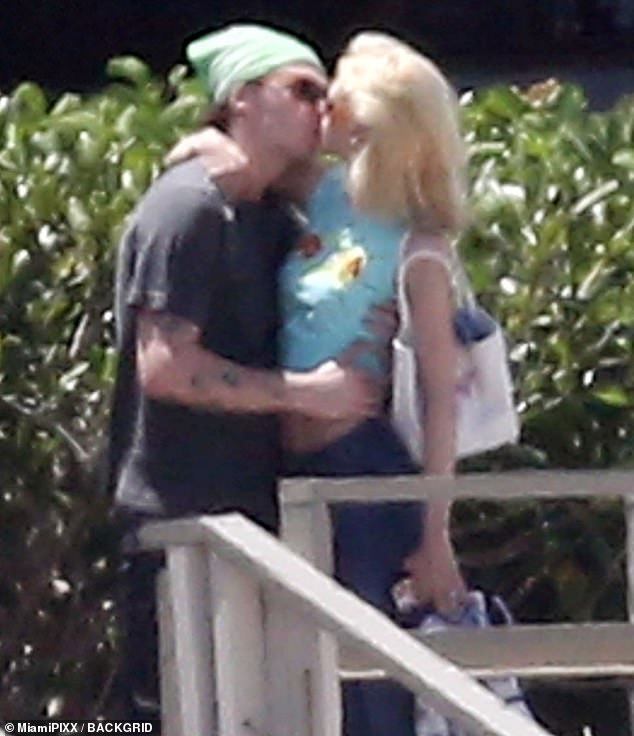 Smitten: Brooklyn Beckham’s repeatedly professed love for Nicola Peltz was well in evidence on Wednesday as they shared a kiss during a family holiday in the Caribbean

Brooklyn also rocked a green bandana wrapped around his brunette locks for the beach day with his wife-to-be.

While Nicola donned a bright blue crop top paired with denim jeans for the outing and matched her partner by adding some chic shades.

She wore her blonde locks down and ensured she had everything needed for a sun-soaked day at the beach by toting a white handbag,

Proving she’s already one of the family, Nicola looked completely relaxed as she kissed her beau while having their picture taken by future brother-in-law Cruz. 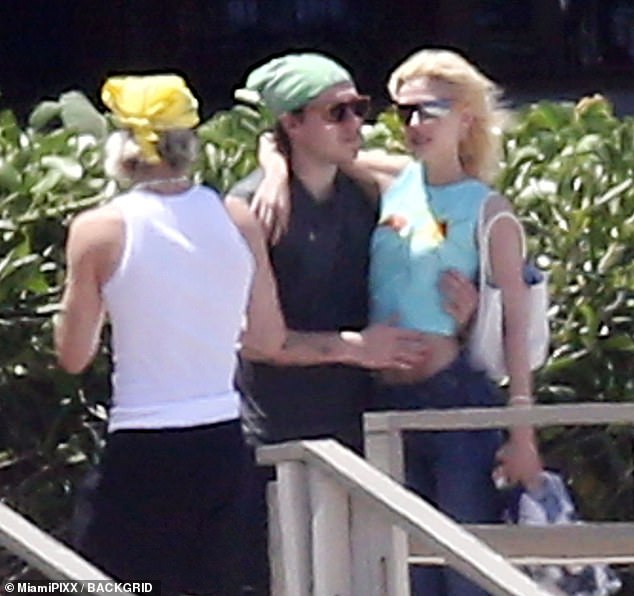 Loved-up: The engaged couple loved every inch the devoted duo while posing for some snaps at the beach

Photographer Brooklyn is more often seen behind the camera, however he happily joined Nicola for some shots of them kissing by the beach.

The loved-up couple wrapped their arms around each other and beamed smiles as they posed up a storm to capture the perfect holiday memory.

Younger brother Cruz seemed to be a dab hand at playing snapper and ensured to get perfect images of the lovebirds.

He took pictures from different angles and made sure to check in with Brooklyn as he shot, sometimes handing over the camera for inspection. 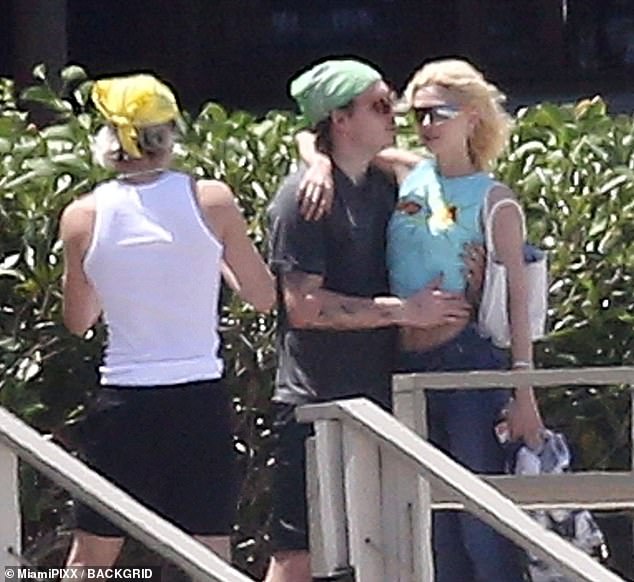 Posers: Brooklyn wrapped his arms around Nicola for the pictures while she draped a toned arm over his shoulders 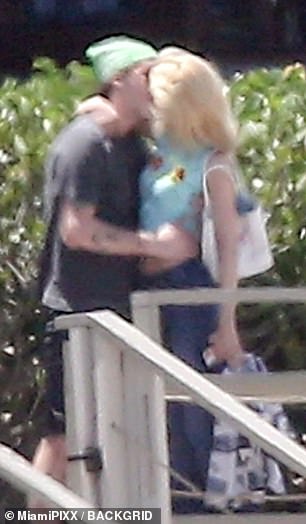 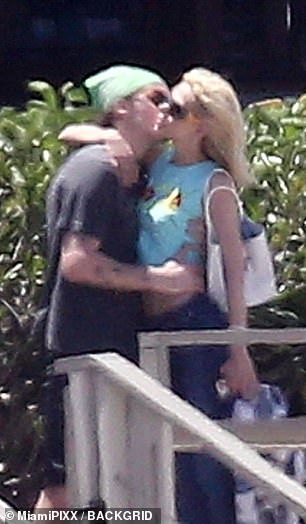 Pucker up! They passionated embraced (left) before Brooklyn placed a more tender kiss on his love’s neck 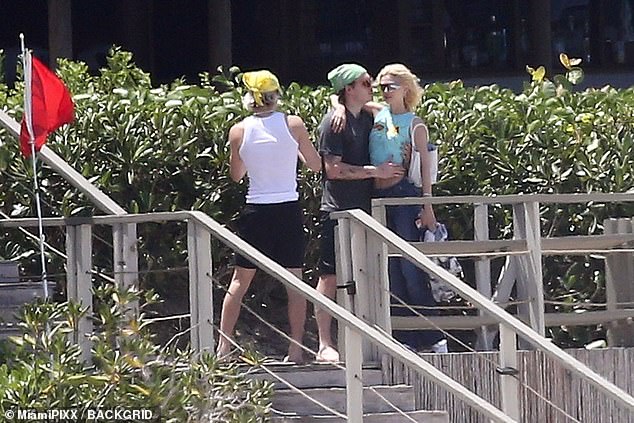 Brother duties: Brooklyn’s younger sibling Cruz, 16, was called in to get the sun-soaked snaps

The family were seen strolling along the beach and kicking back on the sand while chatting as they soaked up the quality time together.

Brooklyn and Nicola often shared loved-up snaps with each other to social media and have recently been revealing their matching tattoos.

On Monday, Nicola  further showed her commitment to husband-to-be Brooklyn when she unveiled a tattoo of his name on her back.

Photographer Brooklyn took to Instagram to proudly show off the American actress’ gesture, which featured his name inked on her body in elegant script. 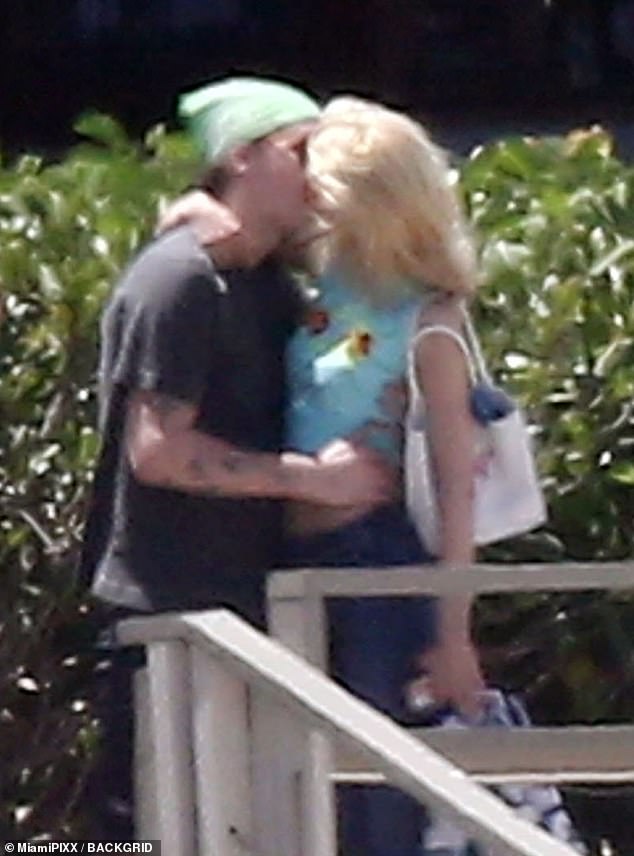 Going for it: The happy couple couldn’t keep their hands off each other 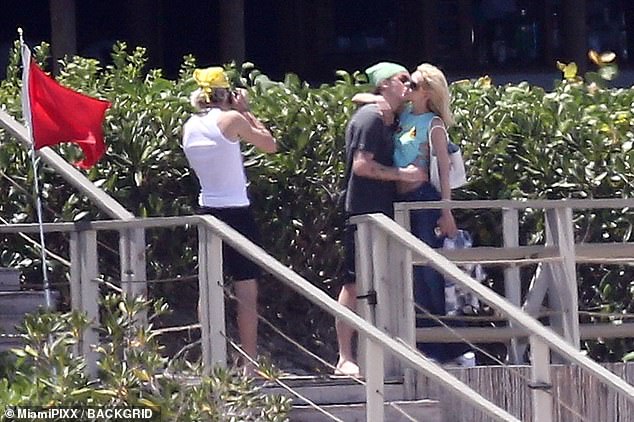 Casual: Brooklyn opted for a black T-shirt and shorts while Nicola went with a blue crop top 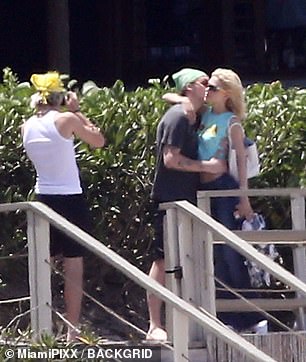 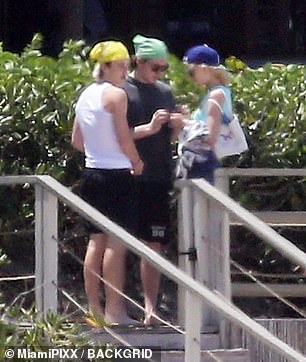 Checking them over: After Cruz snapped the images (left) photographer Brooklyn gave them a once over (right) 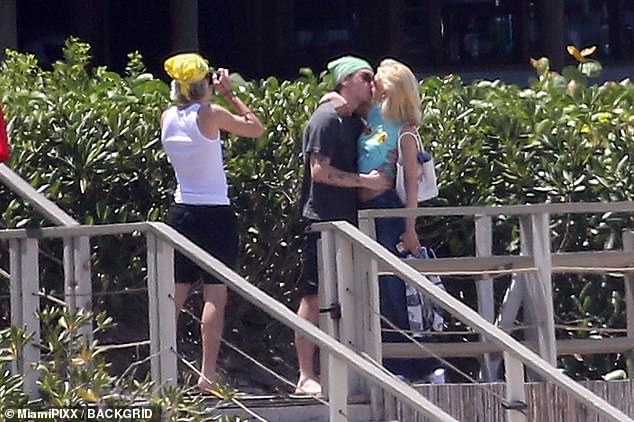 He’s done this before: Cruz remembered to get pictures from of his brother and future sister-in-law from a range on angles 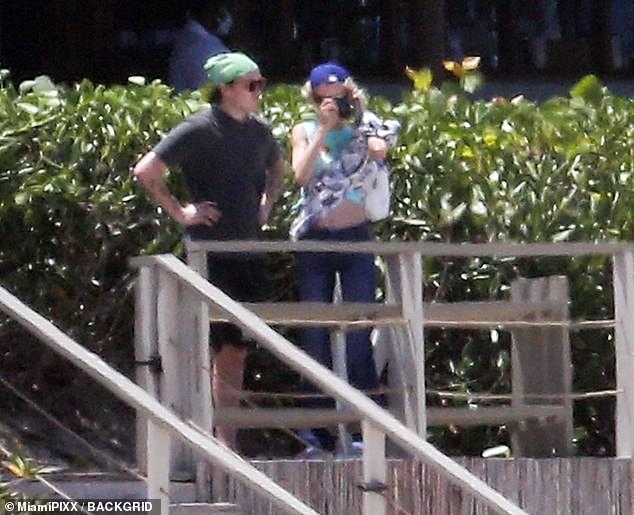 Holiday: Nicola also took a few shots of the beach while standing on the decking with Brooklyn 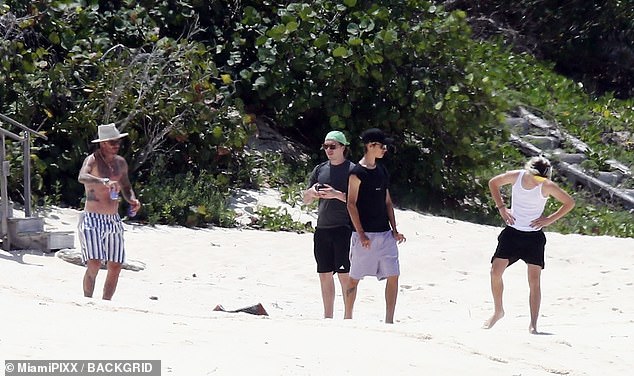 Boys beach day: Brooklyn was joined at the beach by his dad David and two younger brothers Romeo, 18, and Cruz, 16

And in March, the pair got matching butterfly tattoos, inspired by a picture Brooklyn took while watching Nicola work on new drama Lola James.

Brooklyn got two large butterflies tattooed onto his arm, his seventh dedicated to Nicola, while the actress had a small one inked onto her chest.

Brooklyn worked with celebrity tattooist Doctor Woo to bring the ink to life, and Nicola filmed the artist start to ink two of the creatures near his rose artwork.

In comparison, Nicola’s tattoo -which had been inked underneath her collar bone- was a lot smaller than Brooklyn’s ink. 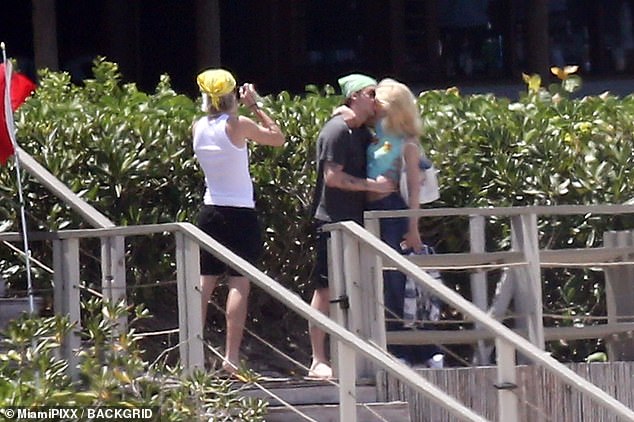 SO in love: The duo often declare their love for each other on social media and have got several tattoos in each others honour 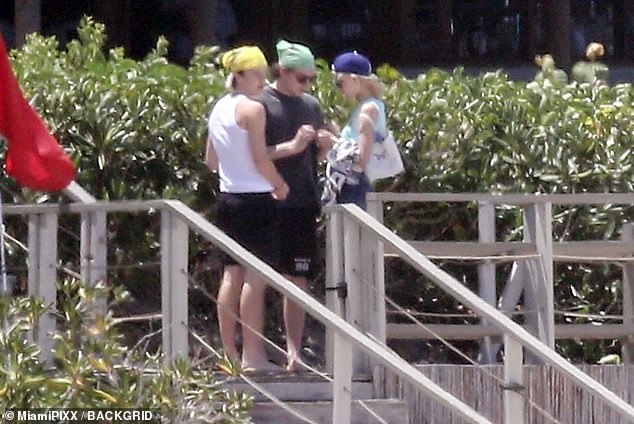 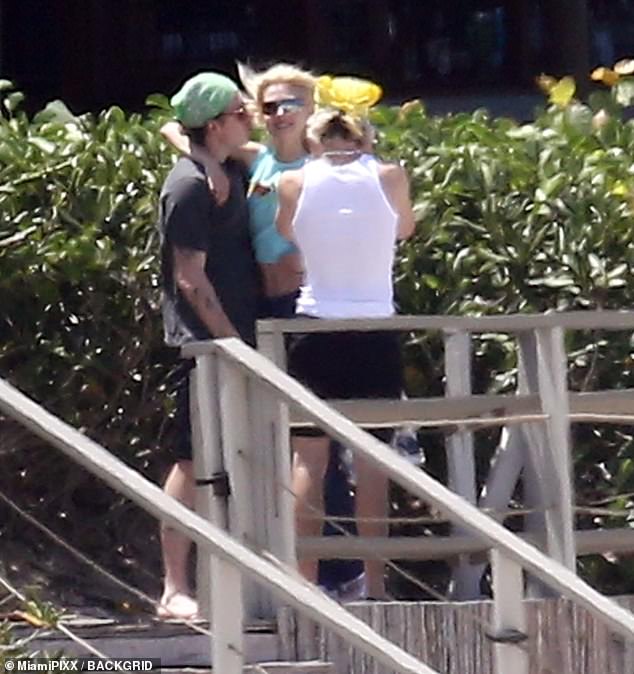 Beaming: Nicola could not stop grinning in another picture taken from a slightly different spot on the sunny decking 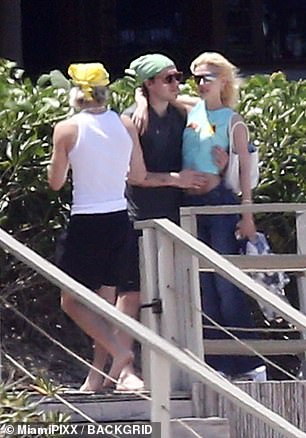 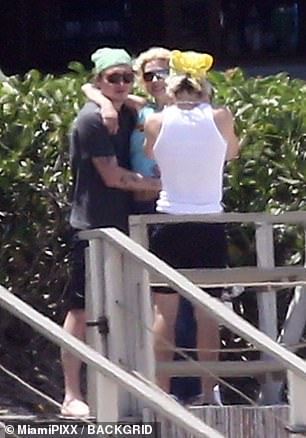 Happy: The loved-up couple wrapped their arms around each other and beamed smiles as they posed up a storm to capture the perfect holiday memory Got some notes? Cruz seemed to be directing the couple at one point during the impromptu photo snapping session 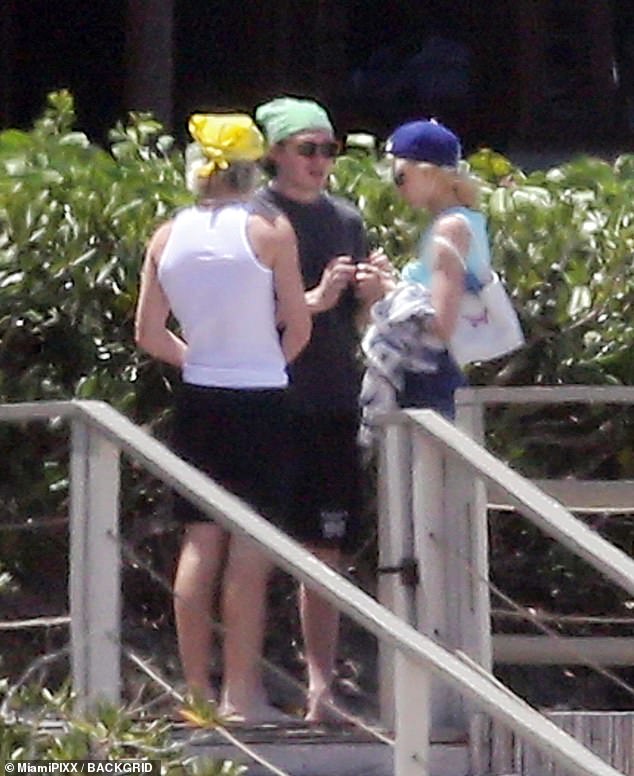 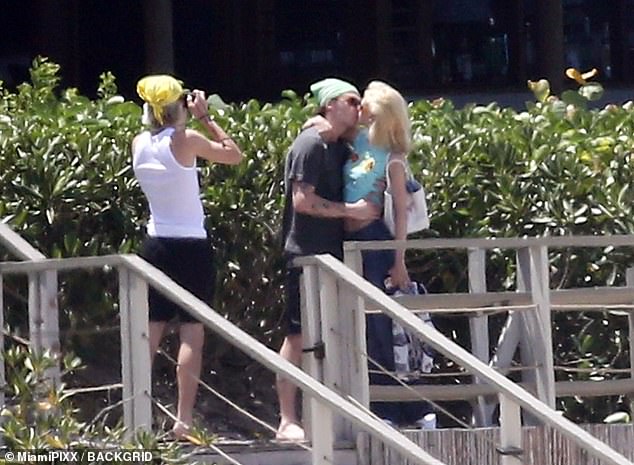 Camera duties: Cruz made sure he did a good job of photographing Nicola and Brooklyn

It came after Nicola revealed that she has had their wisdom teeth turned into a pair of gold necklaces.

Taking to Instagram, the actress posted a picture of the items of jewellery which had two separate teeth pendants on it as she gushed over her ‘best friend’.

Brooklyn also shared a closer look at the jewellery on his social media, and in a gushing tribute to Nicola he wrote: ‘The best gift from my best friend and the most amazing fiance x

‘I love you like crazy. You are the best thing that has ever happened to me. Love you.

‘Words can’t describe how much I love you. I am the luckiest person on this planet xx I will love you forever and ever.’ 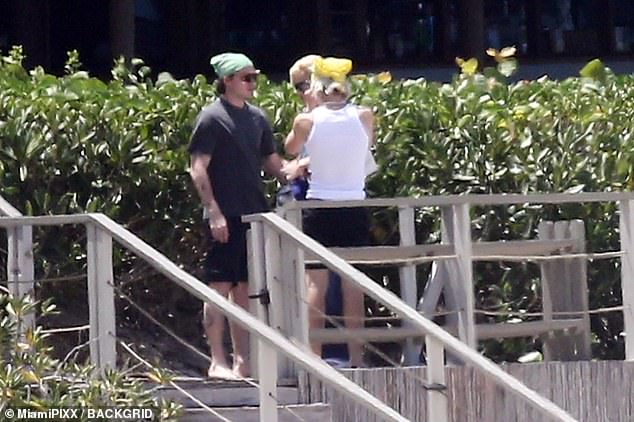 Soaking it up: The trio seemed to be in good spirts at the beach 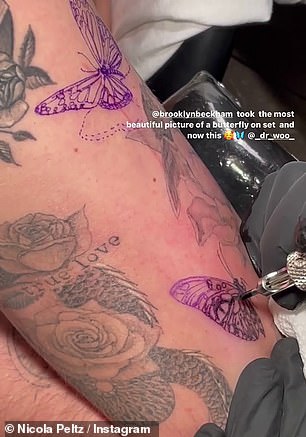 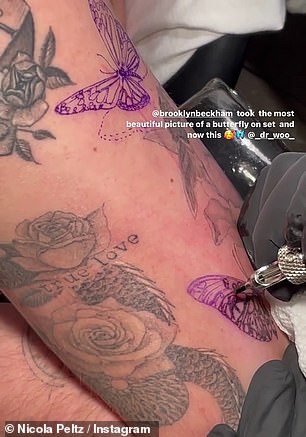 Seventh tattoo: In March Brooklyn added new tattoos which were inspired by a picture Brooklyn took of a butterfly while watching Nicola work on new drama Lola James Devotion: Brooklyn showcased Nicola’s ever-growing tattoo collection as he shared a snap of his name across her back to Instagram on Monday