BRITs 2020: Worse for wear Lewis Capaldi smooches Niall Horan and parties with his parents as he toasts his double award win at boozy bashes

He’s known for his hard partying ways – and Lewis Capaldi seriously let his hair down in style on Tuesday night as he celebrated his two BRITs wins.

The Someone You Loved crooner, 23, was pictured looking bleary-eyed as he left Universal’s star-studded afterparty which was held at The Ned.

Inside the venue, he had been seen smooching One Direction star Niall Horan and partying with his mum and dad, before heading home for the night. 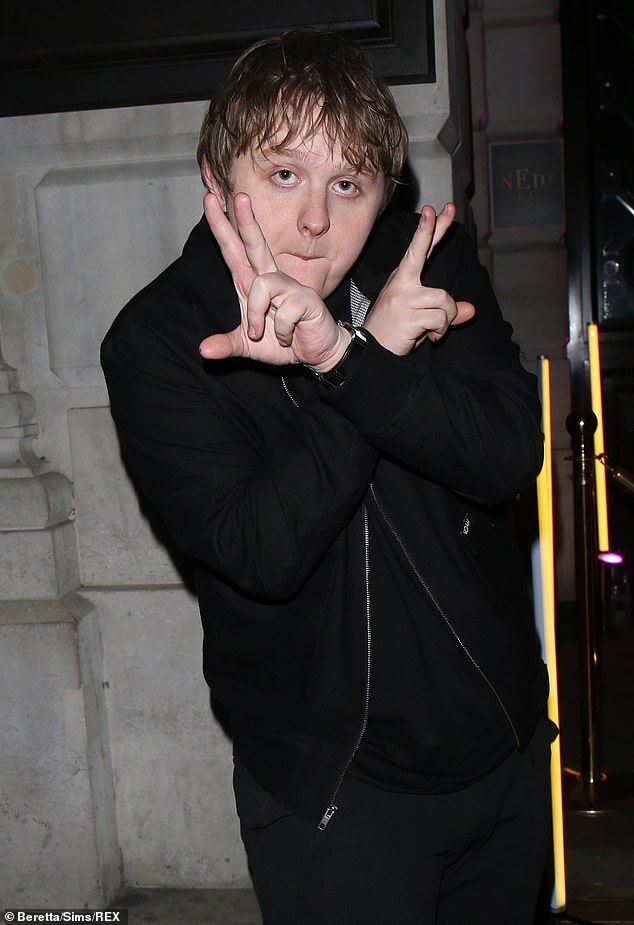 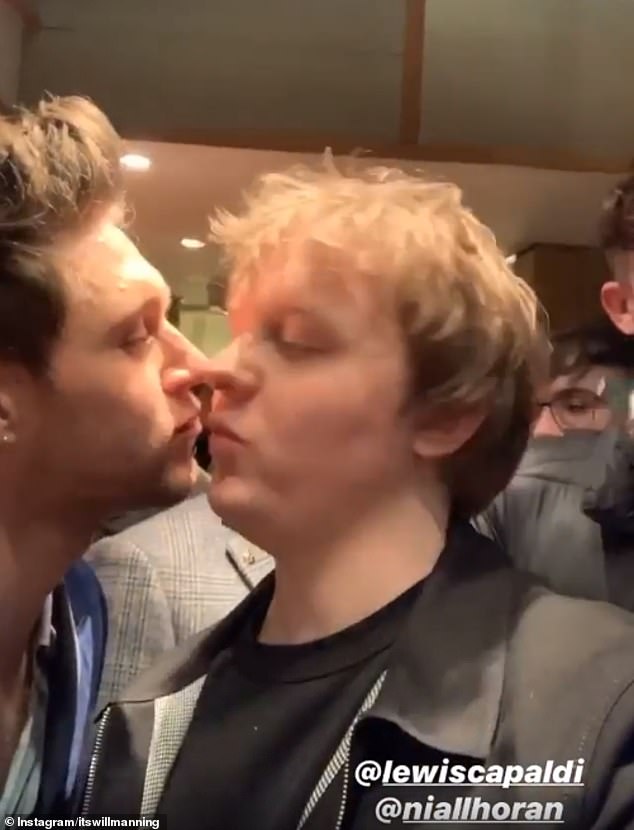 Who could blame him? Once inside the venue, Lewis was pictured puckering up to Niall Horan

It comes as little surprise that Lewis seemed like he might be nursing a hangover the next morning as he even took his beer on stage with him to accept one of his awards.

Saying a brief thank you, the star took time to take a few glugs before heading off the stage. 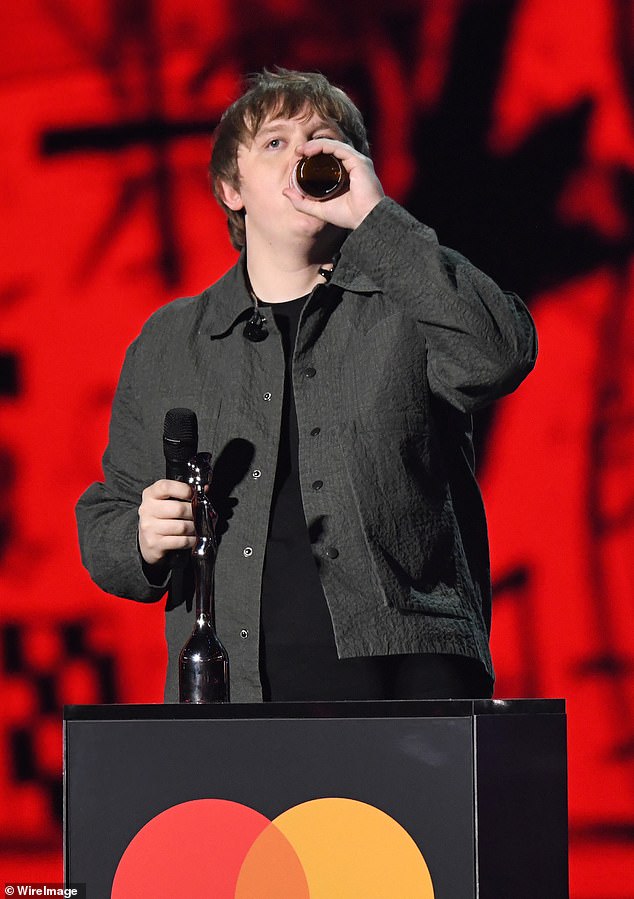 Wild: Lewis took to the stage at the BRITs, where he swigged from a bottle of beer before accepting his award 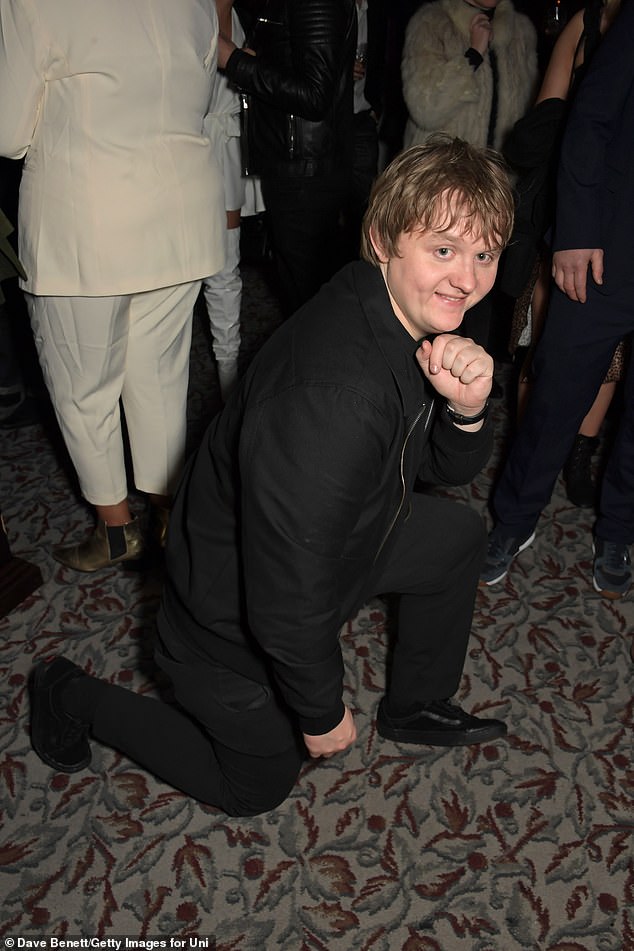 Take a moment to lunge: Lewis put  on a very animated display once inside the venue

Lewis claimed two awards from four nominations, triumphing in the categories for New Artist and Song of the Year.

The latter nomination was awarded for hit single Someone You Loved, a track Capaldi insisted was written for his late grandmother – not former girlfriend and current Love Island star Paige Turley.

Meanwhile Stormzy, 26, picked up the award for Best Male Solo Artist in front of a star-studded audience that included ex-girlfriend Maya Jama. 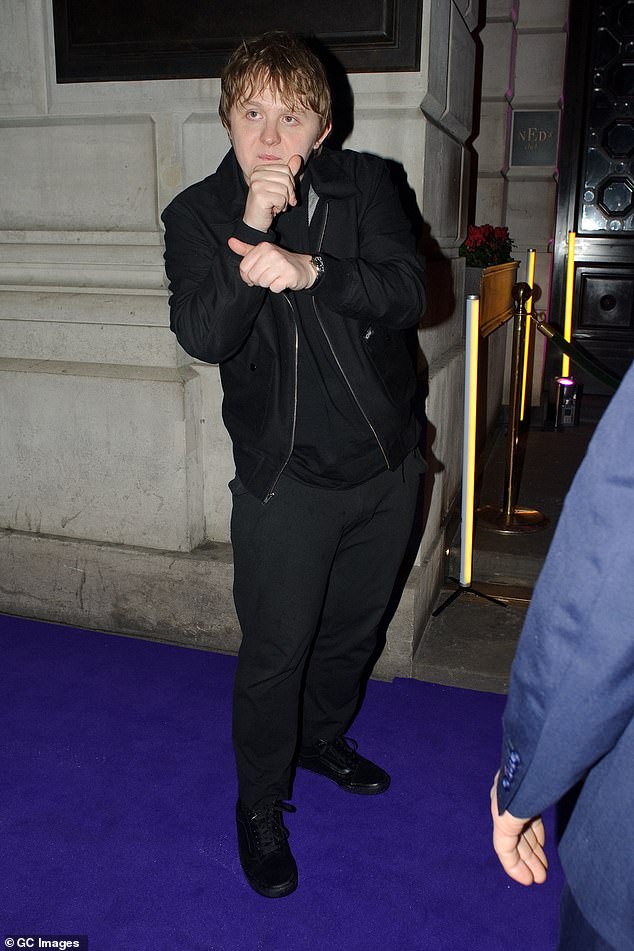 Animated: While waiting to go inside, he gave a small thumbs up to the crowds 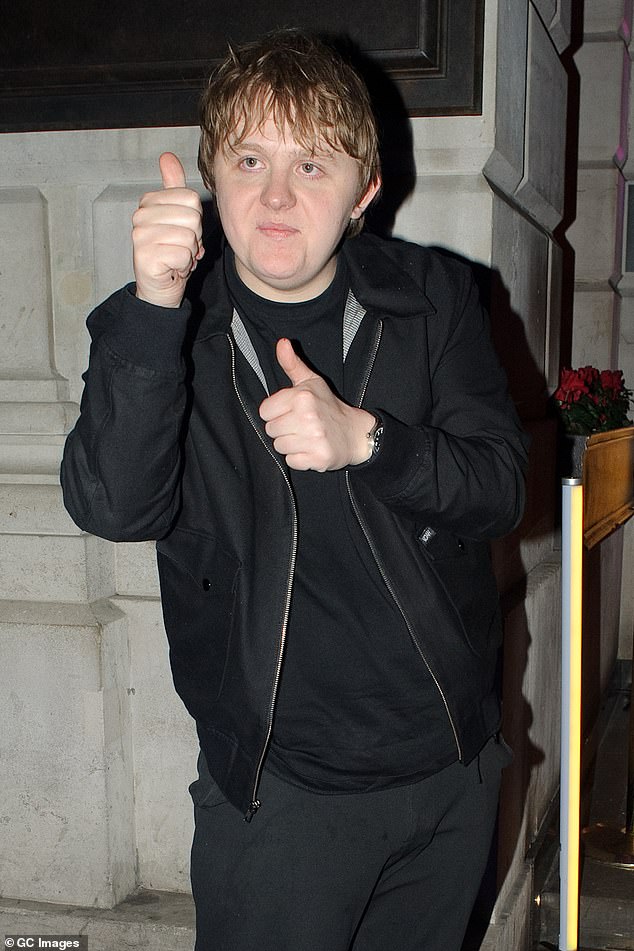 Loving life: He seemed to be having a whale of a time on the night 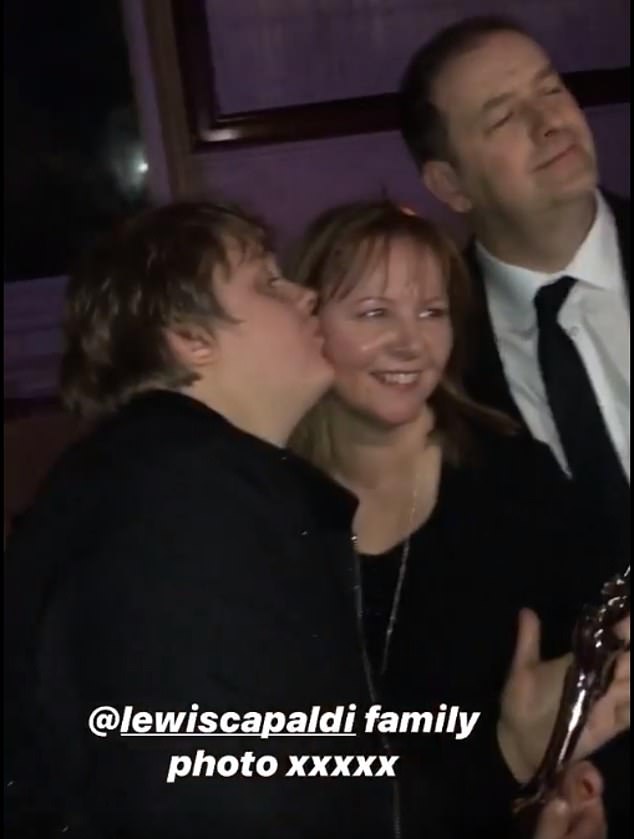 Happy: Lewis also celebrated the night with his parents who were no doubt extremely proud

Accepting his award, the grime star was quick to reference the gender disparity at this year’s ceremony by thanking the team of ‘brilliant women’ who form his management team.

Rising superstar Billie Eilish, 18, received a nod in the International Female Solo Artist category alongside the likes of Lizzo and Ariana Grande.

And after performing new James Bond soundtrack No Time To Die live for the first time, she claimed her first BRIT Award from former Spice Girl Mel C.

Despite Billie’s success, only four nominations out of a possible 25 in the categories which are not gender-specific featured women. 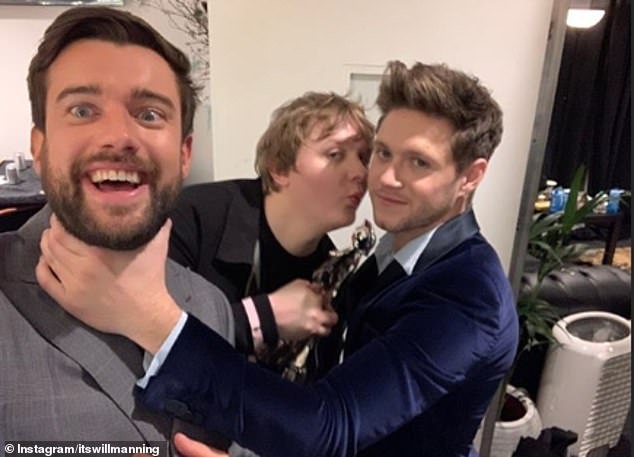 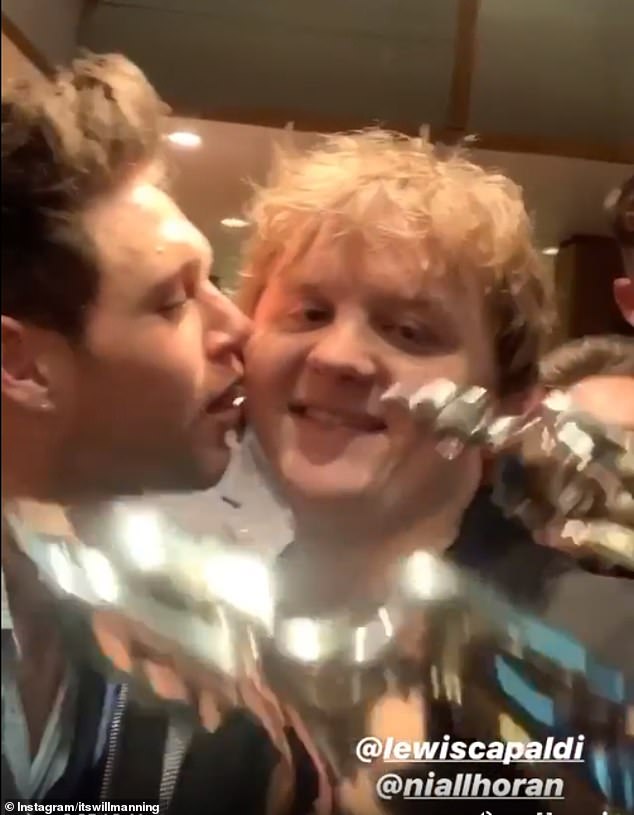 Pucker up! Lewis and Niall really seemed to be getting along nicely 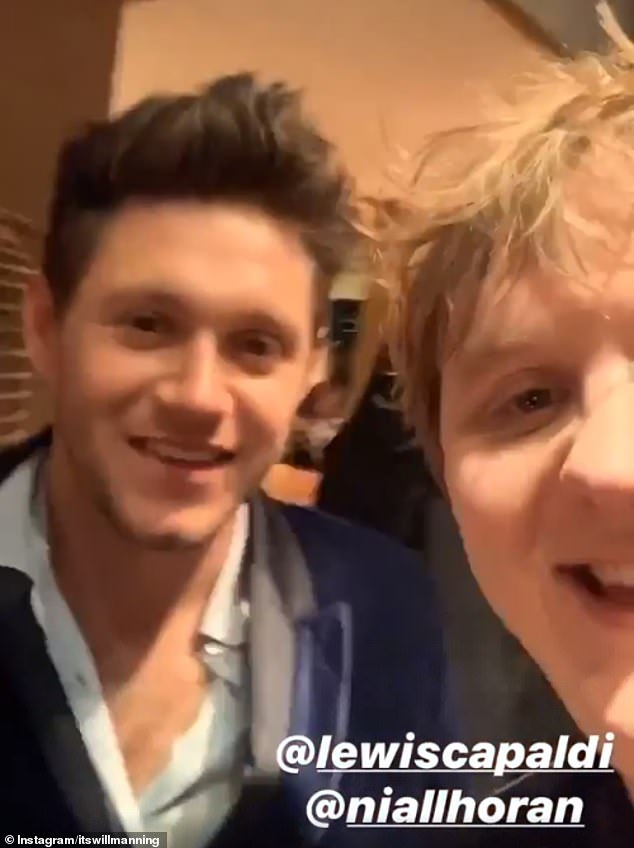 Friends in high places: Niall and his buddy Lewis are embarking on a joint tour 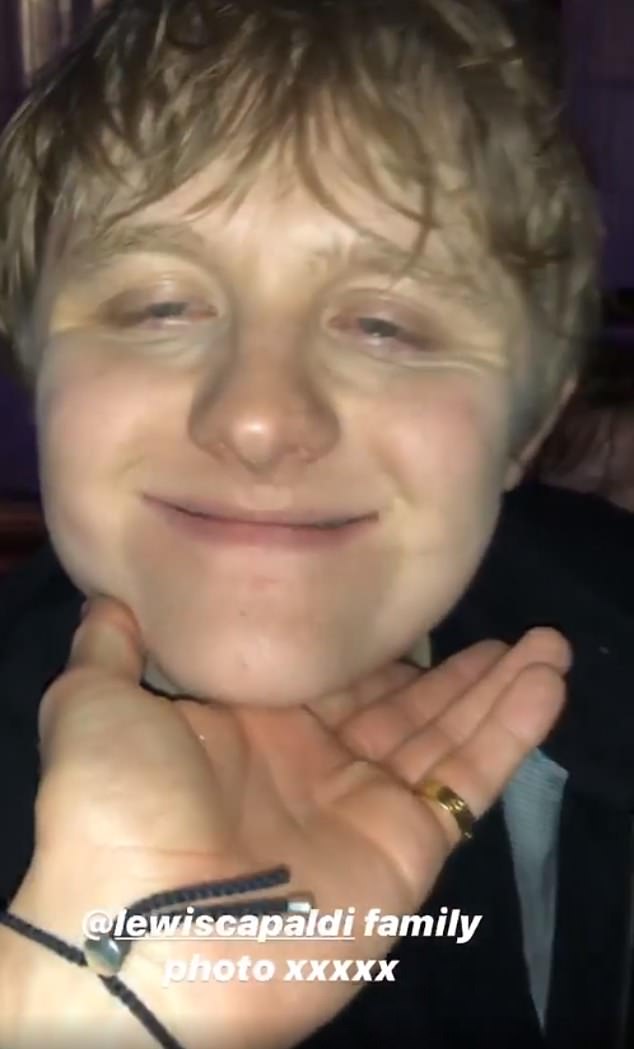 You’ve got to hand it to him: Lewis placed his head in a pal’s hand for one photo opportunity

There were no female performers included in the shortlists for best group or album awards, although English singer Mabel, 23, was nominated for three awards and ultimately claimed one of the biggest of the night – Best British Female Artist.

Oxford based band Foals won Best Group after a return to the spotlight with their conceptual, two-part Everything Not Saved Will Be Lost.

The group beat Bastille, Bring Me The Horizon, Coldplay and D-Block Europe to the honour on Tuesday night.

The lack of nominations in for female artists comes despite a major overhaul of the Brits’ voting academy in 2017 to make it more gender balanced and diverse, with hundreds of new members invited to join the pool.

The awards are voted for by around 1,500 people from across the UK music industry including journalists, record label employees and musicians.

The rising star winner was announced as Celeste late last year, while the producer of the year will be announced at a later date.

The international group and video categories were axed by organisers this year. 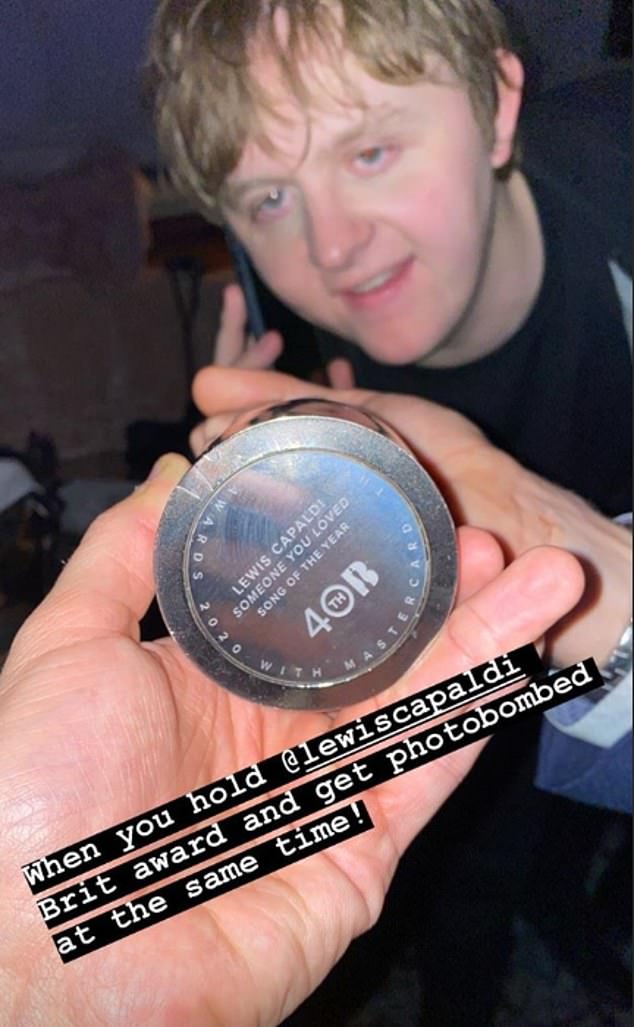 Proud: Lewis’s pals were sharing pictures of his BRIT Award on social media

Song Of The Year

Lewis Capaldi – Someone You Loved (WINNER)

Mabel – Don’t Call Me Up

Mark Ronson featuring Miley Cyrus – Nothing Breaks Like A Heart

Tom Walker – Just You And I

Sam Smith and Normani – Dancing With A Stranger

Bring Me The Horizon

British Album Of The Year

Stormzy – Heavy Is The Head