EXCLUSIVE: Britney Spears enjoys a joy ride in her Mercedes as she’s spotted for the first time since her conservatorship was terminated

Britney Spears was spotted for the first time as a free woman following her conservatorship’s end on Friday November 12.

In images obtained by DailyMail.com, the 39-year-old pop star was seen taking her Mercedes coupe out for a little joy ride on Sunday and making a few phone calls after pulling her car over.

Both her car and phone usage had been heavily monitored and restricted under her overbearing conservatorship, which was finally terminated after 13 years. 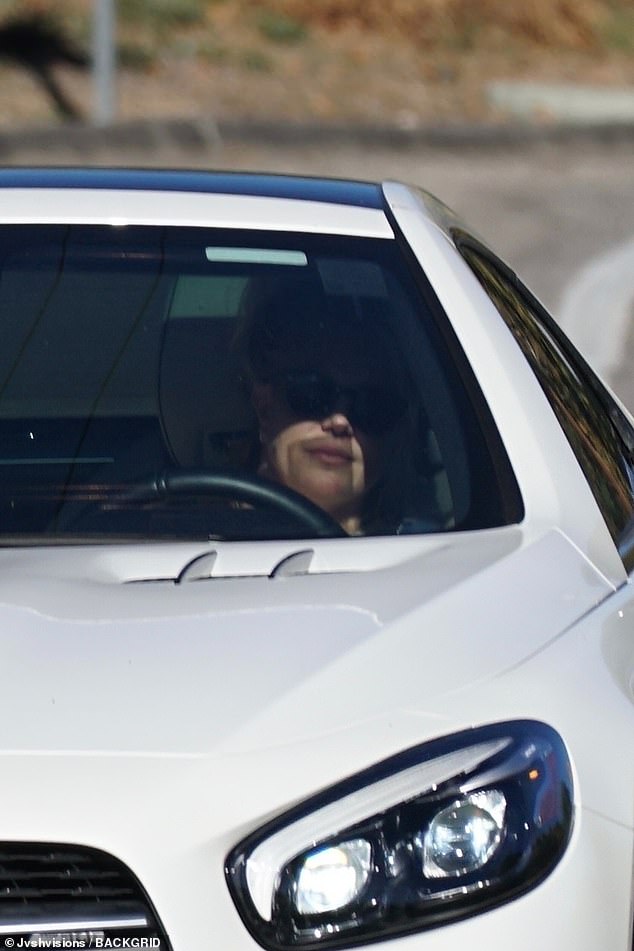 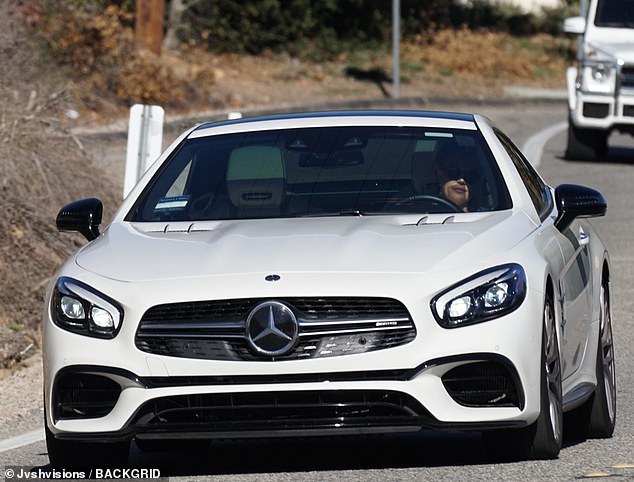 Quick trip: She cruised around Thousand Oaks for about 30 minutes and chatted on her cellphone before driving back to her gated estate

Britney looked at ease to be living life on her own terms as she drove around her Thousand Oaks neighborhood.

The Circus singer was seen in a colorful crew neck with sunglasses on and her blonde hair up in a messy bun.

She cruised around the canyons for about 30 minutes and parked her car in a safe location to take a few phone calls before driving back to her gated estate.

Given the short span of time she was out and about, it seemed as if she was approaching her re-entrance into the world with a bit of caution. 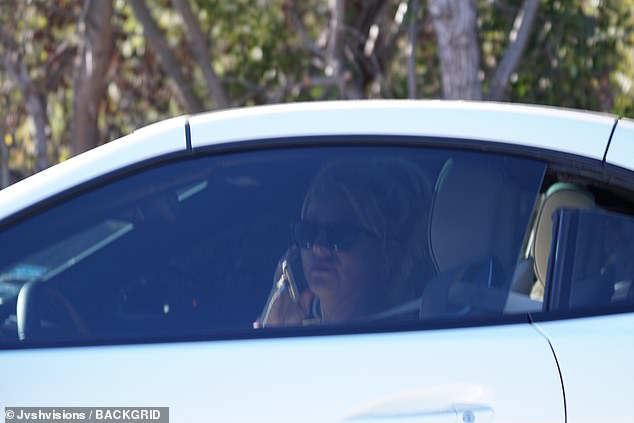 The little things: Both her car and phone usage had been heavily monitored and restricted under her overbearing conservatorship which was finally terminated after 13 years 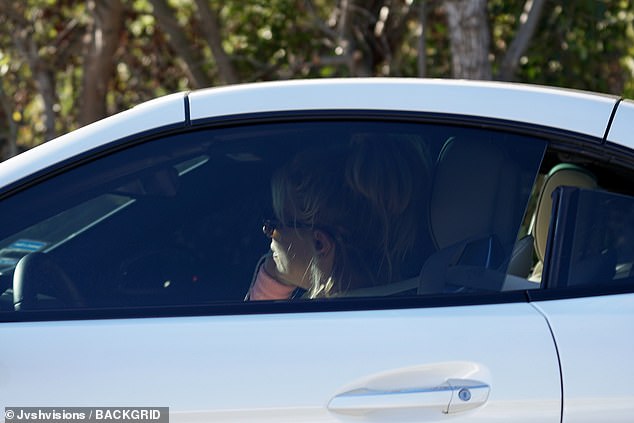 Ring ring: Britney went casual for the brief outing as she flashed what looked to be a colorful crew neck sweatshirt 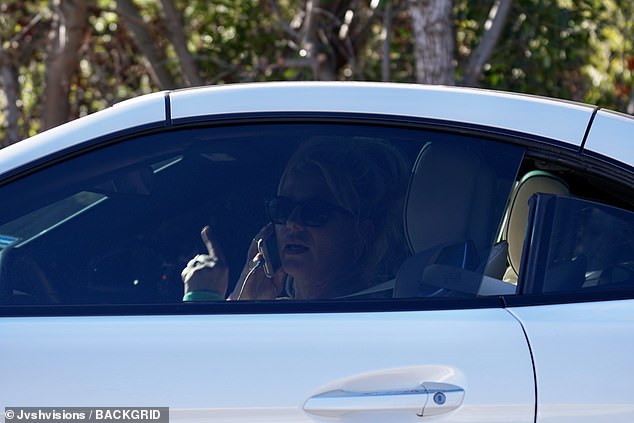 Baby steps: Given the short span of time she was out and about, it seemed as if she was approaching her re-entrance into the world with caution

Among a laundry list of restrictions she incurred under the conservatorship, it was alleged in the Controlling Britney Spears documentary that her cellphone had been bugged by her conservators and security team.

A former employee of security firm Black Box named Alex Vlasov, detailed how her team spoke about putting parental controls on her iPhone and even created a mirror of Britney’s phone via an iPad so all her communication could be monitored without her knowledge.

After the bombshell allegations Spears’ hand-selected attorney Mathew S. Rosengart called for a ‘full and aggressive’ investigation of the claims and called it a ‘striking example of the deprivation of her civil liberties.’

In October Rosengart filed an 110-page petition to depose father Jamie Spears as conservator, and also asked for discovery related to alleged surveillance of the pop star. 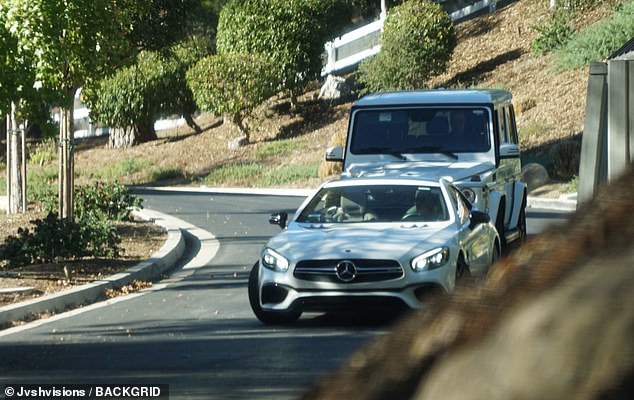 Different ballgame: Spears had previously spoken about the joys of being able to drive alone in a July post as she wrote ‘It’s been a while since I drove alone and well let’s just say it’s a DIFFERENT BALLGAME’ 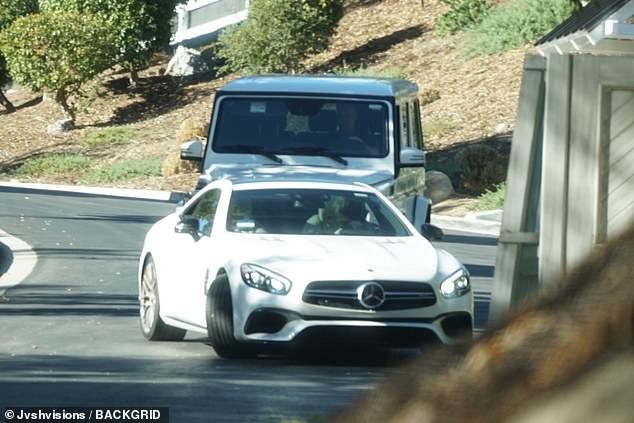 Additionally Rosengart had raised objections over some of the financial compensation Jamie had sought, which included $540,000 for ‘media matters.’

Spears first spoke out against her father and the ‘abusive’ conservatorship in June, asking Judge Brenda Penny to revoke the conservatorship without having to be evaluated.

In August he stepped down as conservator of her estate following Spears’ petition asking that he be removed from his position and spoke about charging him with conservatorship abuse, and in September he was officially suspended.

On Friday November 12, Judge Penny terminated the court-ordered conservatorship in a Los Angeles County Superior Court with no further medical or psychological evaluations.

Rosengart told the judge ‘The time has come today to end the conservatorship’ and later called it a ‘monumental day’ for the pop star.

‘What’s next for Britney is up to one person — and this is the first time we can say this in a decade. It’s up to Britney,’ he told reporters. Britney, as of today, is a free woman.’ 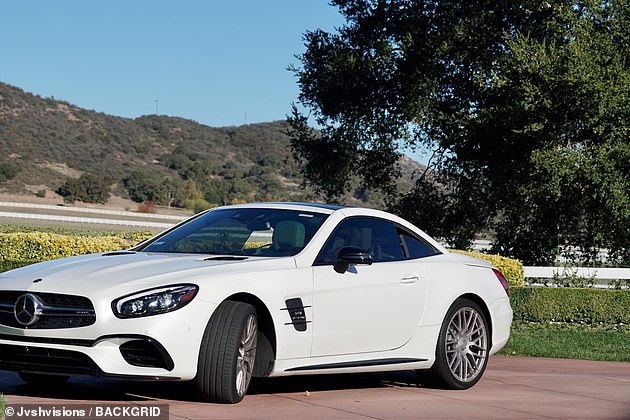 Long battle: Spears first spoke out against her father and the ‘abusive’ conservatorship in June, asking Judge Penny to revoke the conservatorship without having to be evaluated

And as she had publicly talked about suing her family — namely father Jamie — he added that it would be ‘up to her’ if there were to be a lawsuit.

‘My dad [Jamie] may have started the conservatorship 13 years ago … but what people don’t know is that my mom is the one who gave him the idea,’ the singer had written in a post.

A source familiar with the case confirmed that Spears had hired forensic accountants and did intend to sue her father Jamie for ‘conservatorship abuse.’

‘She’s mad as hell and you can expect to see a lawsuit filed against Jamie Spears very soon,’ the insider shared adding that ‘She blames her father for, effectively, ruining her life for the past 13 years.’

With a $60M net worth per recent financial documents, her father had been in control of her fortune when he became sole conservator of her estate in 2019. 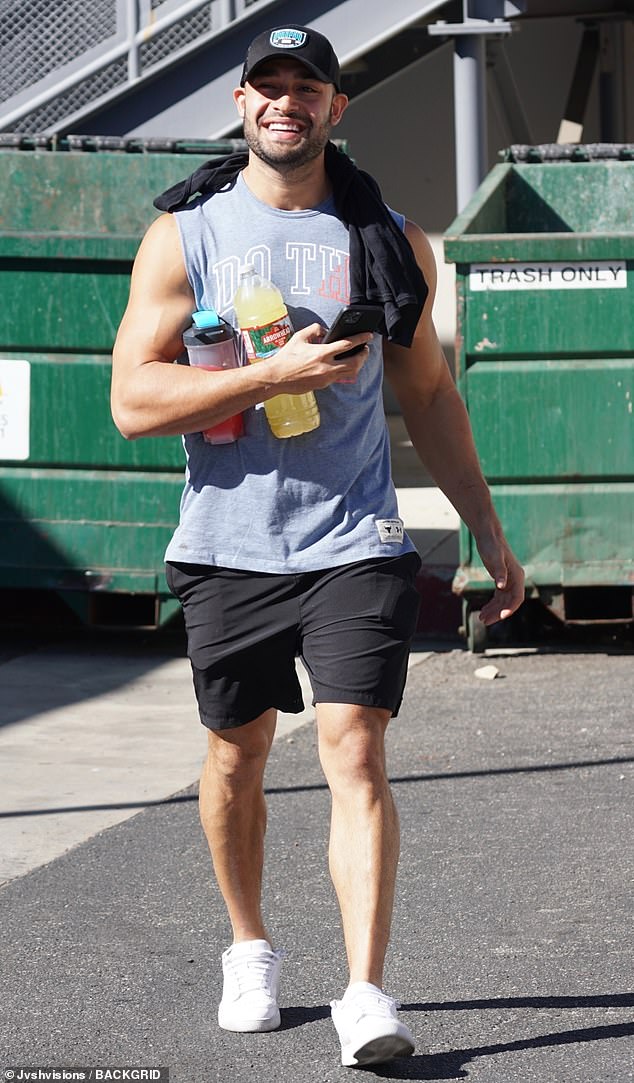 Smiling big: Spears’ fiance Sam Asghari, 27, was pictured with a huge smile plastered on his face on Saturday November 13, as he ran errands in West Hollywood 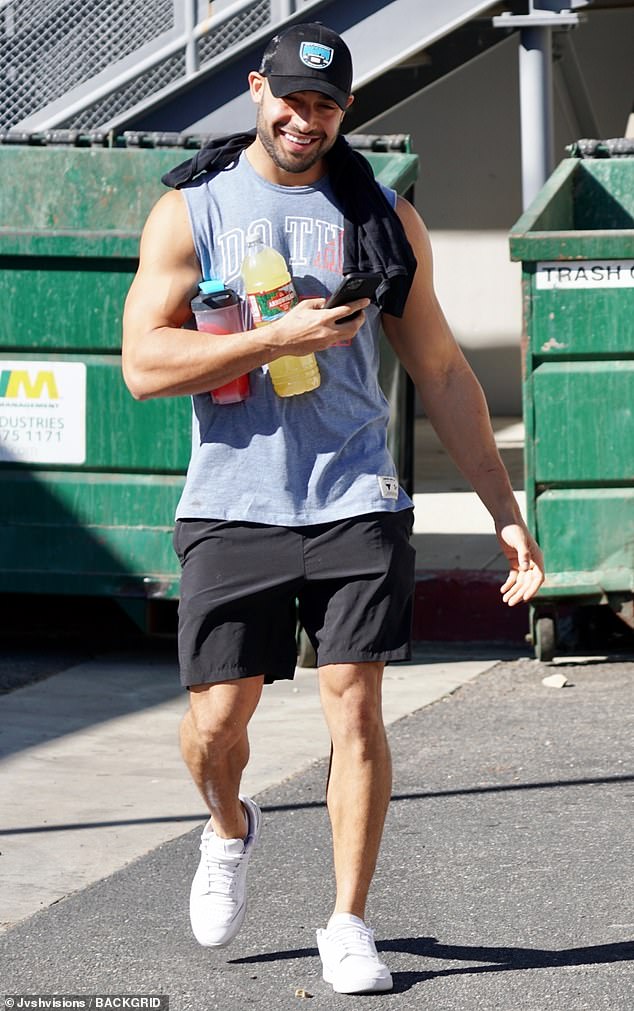 Supportive: ‘History was made today. Britney is free!’ Asghari wrote on Instagram following the termination

Last November a court had ruled not to suspend Mr. Spears as conservator, and instead granted financial institution Bessemer Trust joint control over the estate, making them co-conservators.

He had denied any wrongdoing, saying his daughter’s $60 million fortune was protected under his guidance.

Following the conservatorship’s end after 13 years, Britney shared a video of her #FreeBritney supporters and wrote: ‘Good God I love my fans so much it’s crazy !!! I think I’m gonna cry the rest of the day !!!! Best day ever … praise the Lord … can I get an Amen.’

Her fiance Sam Asghari also penned a post of support as he wrote: ‘History was made today. Britney is free!’ 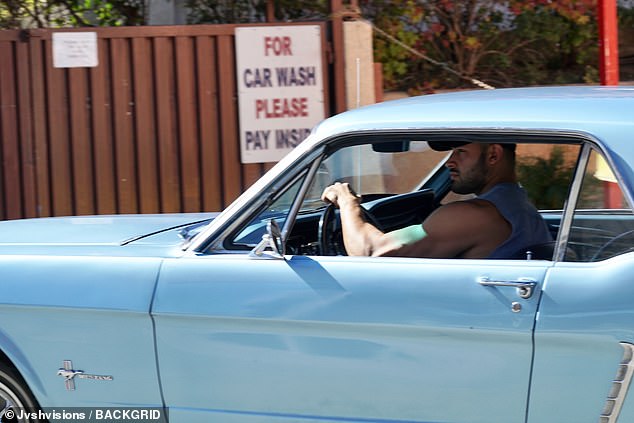 New wheels? He also looked to show off a brand new baby blue vintage Mustang which he was seen driving off in after getting in a workout 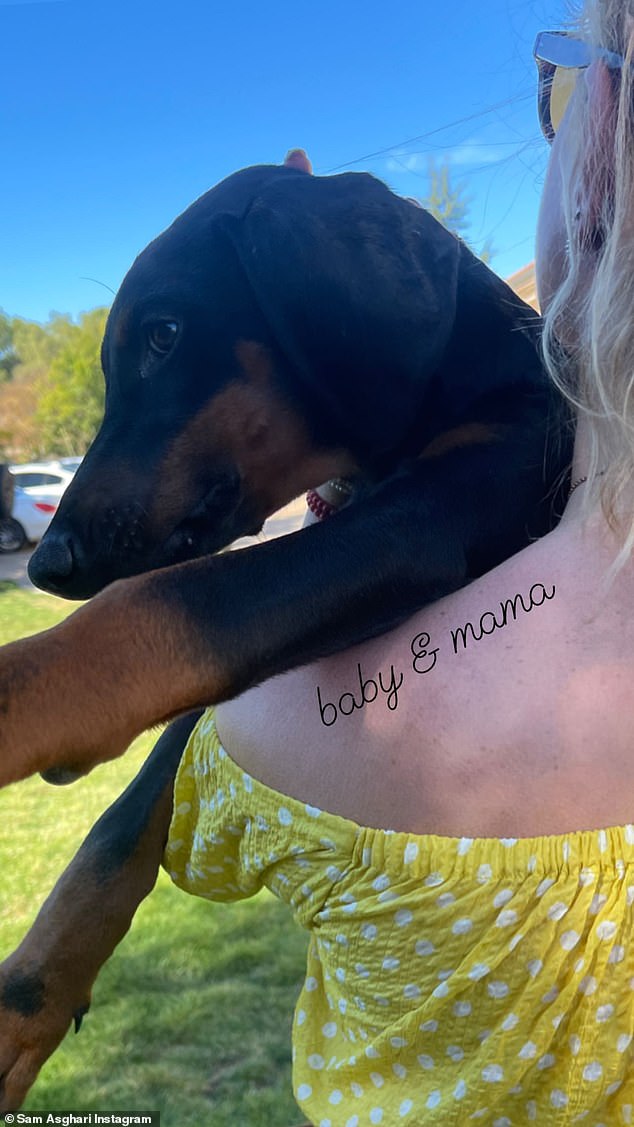 First glimpses: The personal trainer/actor had additionally shared a glimpse into Spears’ first days as a free woman as he posted a snap of her cradling her dog with the caption ‘Baby & Mama’

Asghari, 27, was pictured beaming with a huge smile plastered on his face as he ran errands in West Hollywood on November 13 — one day after the conservatorship’s end.

He also looked to show off a brand new baby blue vintage Mustang which he was seen driving off in after getting in a workout.

And the personal trainer/actor had additionally shared a glimpse into Spears’ first days as a free woman as he posted a snap of her cradling her dog with the caption ‘Baby & Mama.’

She had previously said in her June testimony that matters such as her ability to get married and have a baby were barred under the ‘abusive’ conservatorship.

In court papers, Jamie’s attorneys describe how she is making more money.

Jamie files paperwork asking for the conservatorship to be extended beyond California, to apply in Hawaii, Louisiana and Florida as well.

He steps down as her primary conservator after allegations he abused one of her sons but is still listed as one of those in charge.

Jamie’s attorneys claim everyone is happy together and enjoying spending time together in quarantine.

NOVEMBER 2020: Britney’s attorneys claim in papers that she is afraid of her father and asks for Bessemer Trust to be put in charge.

In an emotional testimony, Britney told the court that she had suffered psychologically for years as a result of the conservatorship which she said was so restrictive, she wasn’t allowed to remove her IUD birth control.

A Los Angeles court granted Britney the right to choose a lawyer to help her end her conservatorship, after she told a judge the current situation was ‘allowing my dad to ruin my life.’ She chose former federal prosecutor Mathew Rosengart as her new attorney.

The singer’s mother’s attack on Jamie gives her a powerful new ally in her bid to be freed.

Accountant John Zabel has been named as the temporary replacement conservator.

Jamie Spears filed court documents declaring that he was leaving the arrangement immediately, handing over all documents, and not seeking any financial benefit.

When Danielle Bregoli first appeared on The Dr. Phil Show, she was just 13 years old, and she definitely didn’t seem to be on her…