Britney Spears highlighted her stellar figure and taut midriff in a skimpy crop top while also serving up some delicious advice.

The Baby One More Time singer dipped into some self-help wisdom and shared it with others, specifically the reminder to ‘Stay away from people who tell you you’re free salsa. Remind yourself every morning I am guacamole.’

The Grammy winning artist posted a sign with the sage advice along with a series of pictures on social media that had fans flashing back to the early 2000s. 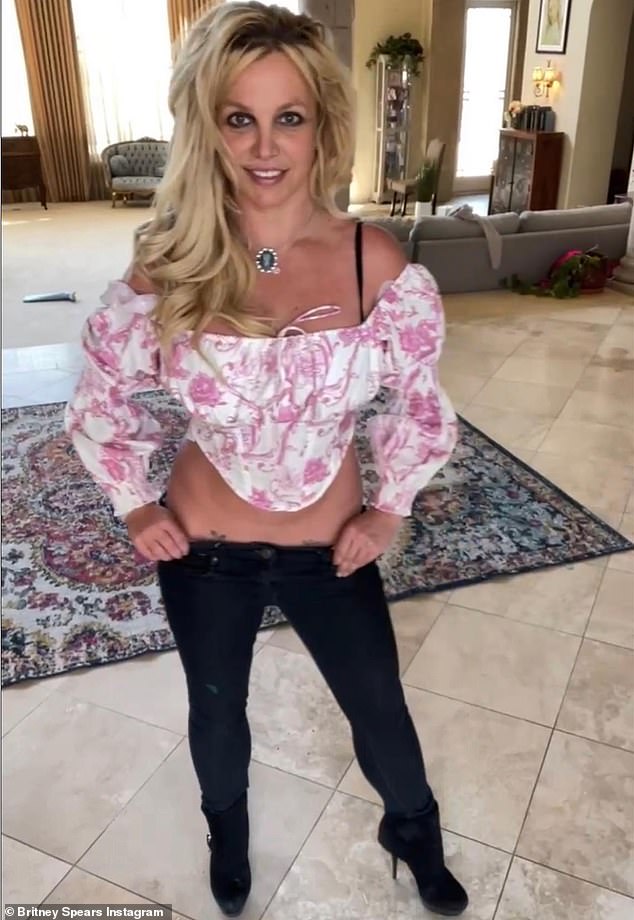 Go with the guac: Britney Spears highlighted her flat tummy on Saturday while sharing the reminder to ‘Stay away from people who tell you you’re free salsa. Remind yourself every morning I am guacamole’

The 40-year-old mother of two looked like her teen-aged self in a pair of extreme low rise jeans that allowed a peak at her flat abs, along with a partial glimpse at two of the artist’s bikini area tattoos.

Her white crop top was decorated with delicate pink floral designs and a ruffled bust and sleeves.

The Crossroads actress wore a blue cameo pendant and styled her hair in loose layers, with a showing of her natural color at the roots. 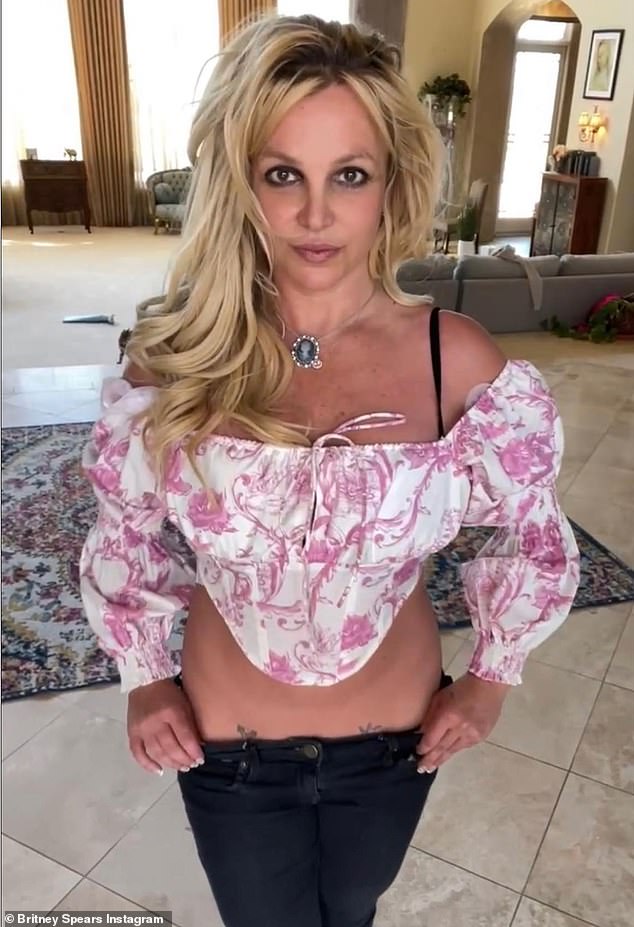 Retro: The 40-year-old mother of two wore extreme low rise jeans that allowed a peak at Britney’s flat abs, along with a partial glimpse at two of the artist’s bikini area tattoos. paired with a pink and white floral cropped peasant top with black bra straps showing and black ankle boots 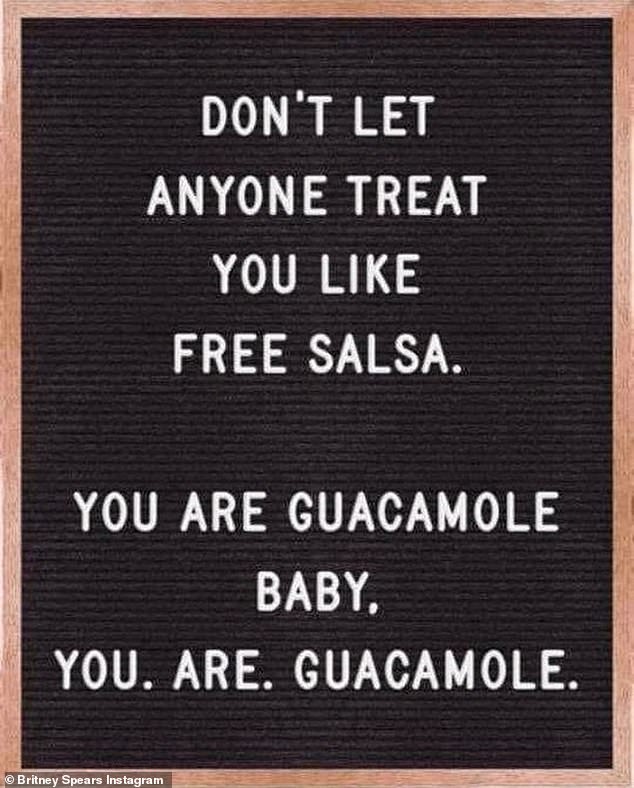 Britney seems to be posing at her home in the ‘guac’ pics, but the Lucky vocalist has created a huge buzz, after posting some vacation pictures of her partner, Sam Asghari, from an elite, tropical resort

Although the two haven’t made any public steps toward marriage, she wrote in her caption, ‘…so here’s me shooting pics of my HUSBAND [diamond ring emoji] !!!!’

The Unbelievable! actor posted pictures and video from the same beautiful location on his own social media account, but has neither confirmed nor denied that the two are husband and wife.

He did, however, respond to the post with a series of heart emojis and a self-deprecating, ‘Not this jerk again.’

In the long post, Britney revels in the fact that paparazzi are not allowed at the vacation spot, and she is able to be herself, ‘for the first time in my life … I can actually be that girl who can act stuck up and talk to others about how I’m getting married … out at dinners [laugh emojis]!!!!!’ 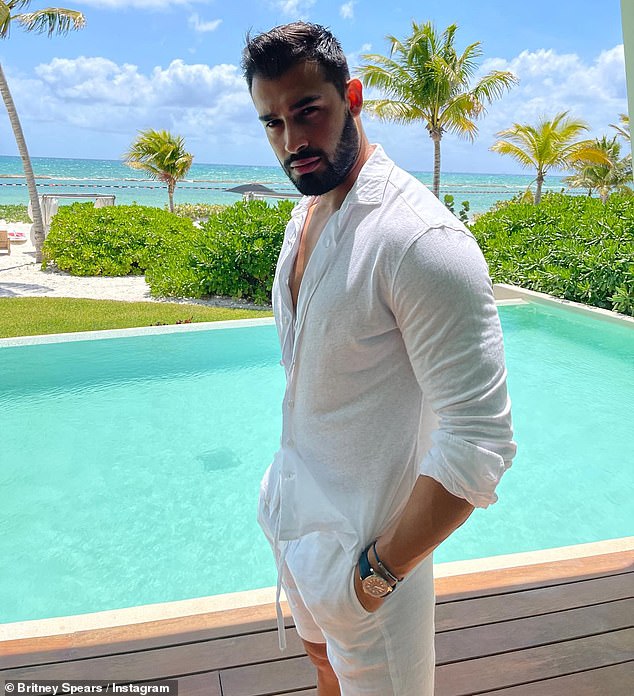 Married?: The beleaguered star is enjoying a restful vacation at an elite resort, and created a huge buzz on social media, hinting in a post with a picture of her partner, Sam Asghari, the trip may be doubling as a honeymoon writing “so here’s me shooting pics of my HUSBAND!!!’ 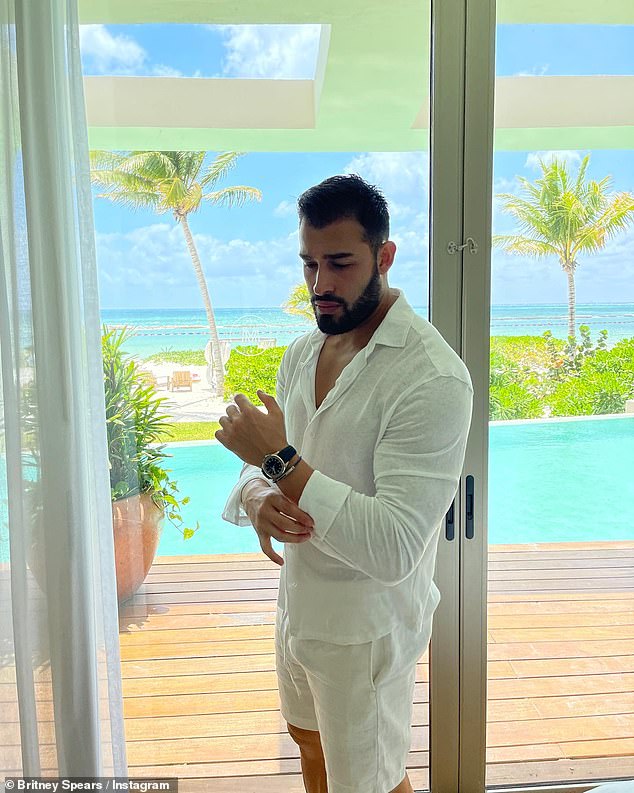 Keeping quiet: The Unbelievable! actor posted pictures and video from the beautiful location on his own social media account, but has not confirmed nor denied that the two are married. He responded with a series of heart emojis and wrote, ‘Not this jerk again’

Before The Overprotected songstress was released from a constrictive legal conservatorship last year, she had indicated she wanted to marry the actor, and have a child with him, but did not think the court would allow her, which proved not to be the case after the conservatorship was dissolved.

Her father, Jamie Spears, had been appointed by a California court in 2008 to oversee the singer’s health and finances after some highly publicized incidents at the time.

While Britney may be starting her own new family, the feud with her family.

She is currently refusing to pay some $660 thousand dollars in legal bills her mother, Lynne, says she incurred during the dispute, but the Make Me crooner says she’s under no obligation to do so, and has already paid $1.7 million for her mother’s home and related expenses in Kentwood, Louisiana.

It’s in the jeans: The 40-year-old mother of two looked a lot like her teen-aged self in a pair of extreme low rise jeans. The Toxic singer is pictured on the right wearing similarly low cut pants. She is posing with her mother, Lynne, with whom she is currently having a legal dispute