Britney Spears calls herself the ‘nerd of the century’ as she goes geek chic in large brown eyeglasses: ‘I think I pull it off!’

Britney Spears ditched her everyday glam to play around with her nerdy side on Tuesday,

The singer, 41, looked geek chic as she modeled a pair of large, brown-frame eyeglasses during what appeared to be a private jet ride.

She shared the snap to Instagram, where she referred to herself in the caption as the ‘nerd of the century.’

She wore her long blonde locks up into a messy hairdo and turned her lips up in a small puckered grin while giving the camera a thumbs up. 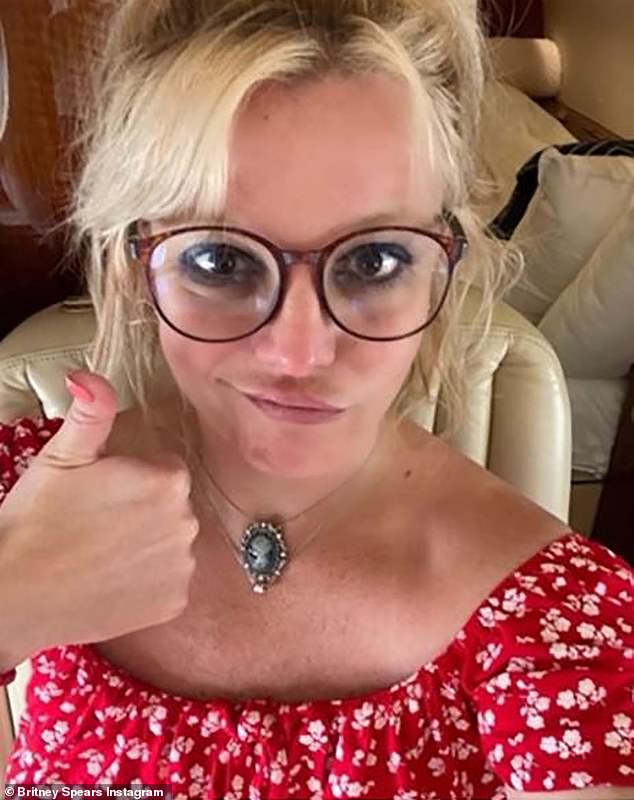 Nerdy chic: Britney Spears pulled off the nerdy look in one of the most recent selfies she shared to social media on Tuesday afternoon

The Toxic singer accessorized with a choker slender neck and she donned a red and white blouse.

She praised her new look while admitting to her followers that she prefers to be low-key when she’s not posing for Instagram snaps.

‘I try to be sexy and sh*t on Instagram but those of you who really know me …. ‘Nerd of the Century’ [three nerd emojis],’ she wrote.

‘… but hey I think I pull it off !!!! Well not really …. or sh*t maybe I do [woman shrugging emoji, laughing crying emoji, hand over mouth emoji]!!!!’ concluded the Toxic singer. 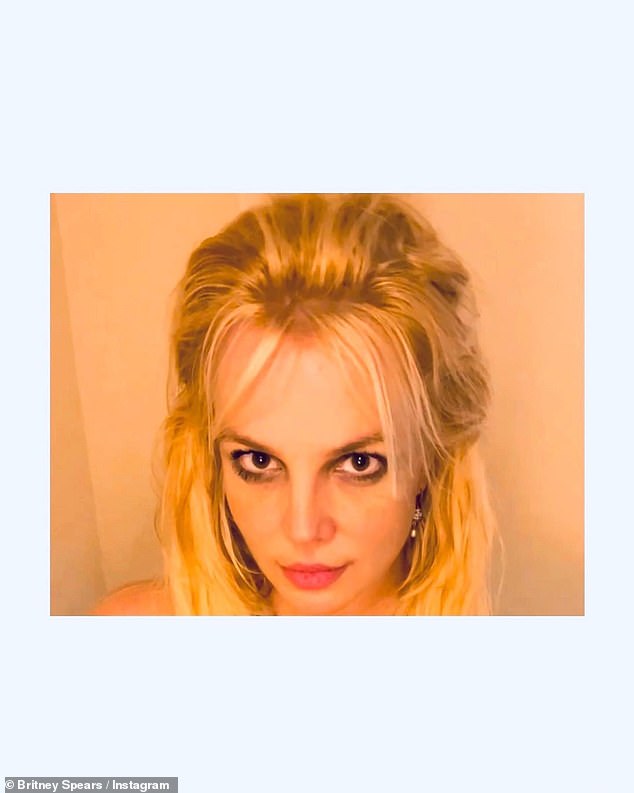 New look: A few hours later she shared several photos of a different hairstyle she donned and smoky eyeshadow that made her brown eyes pop 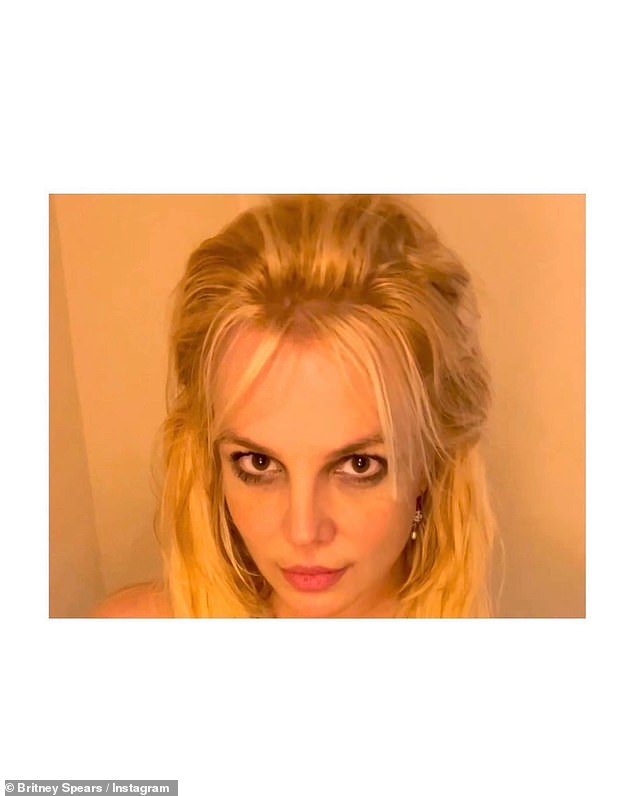 Makeup: She painted her lips bright pink and played with the lighting in the several photos she shared

But just a few hours later, Britney kicked her spectacles to the curb to put her signature smoky eyeshadow center stage.

She’d also spruced up her hair and added a pair of dangly earrings for a touch of glamour.

She painted her lips bright pink and played with the lighting in the several photos she shared.

‘MEXICO [Mexican flag emoji] !!! I pulled my sides up like I used to in high school and I look pretty young !!! It’s weird they still sell the same barrette [woman shrugging emoji] !!! I always look extremely young with this hair-do !!!

‘I played in the shower for 3 hours with water on and off [shower head emoji] !!! The lighting was unbelievable[light bulb emoji]!!! It was warm and soft … it made me look 10 years old !!!’

Her selfies came a couple days after she and her new husband Sam Asghari enjoyed a romantic Christmas. 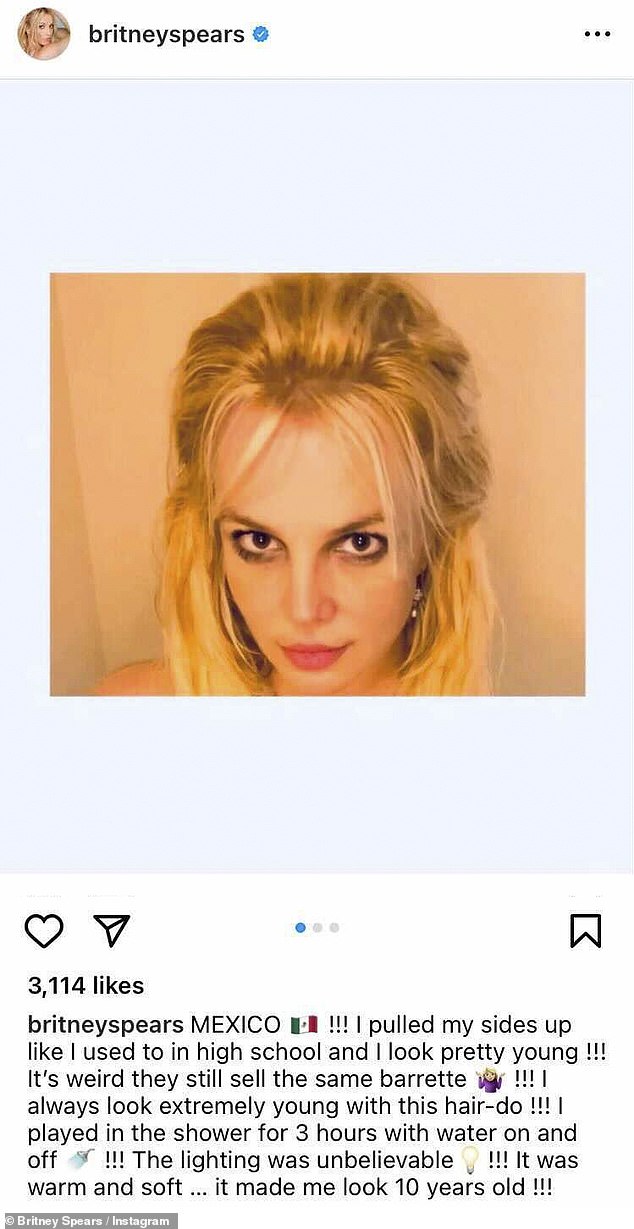 Long caption: ‘MEXICO {Mexico’s flag] !!! I pulled my sides up like I used to in high school and I look pretty young !!! It’s weird they still sell the same barrette [woman shrugging] !!! I always look extremely young with this hair-do !!! 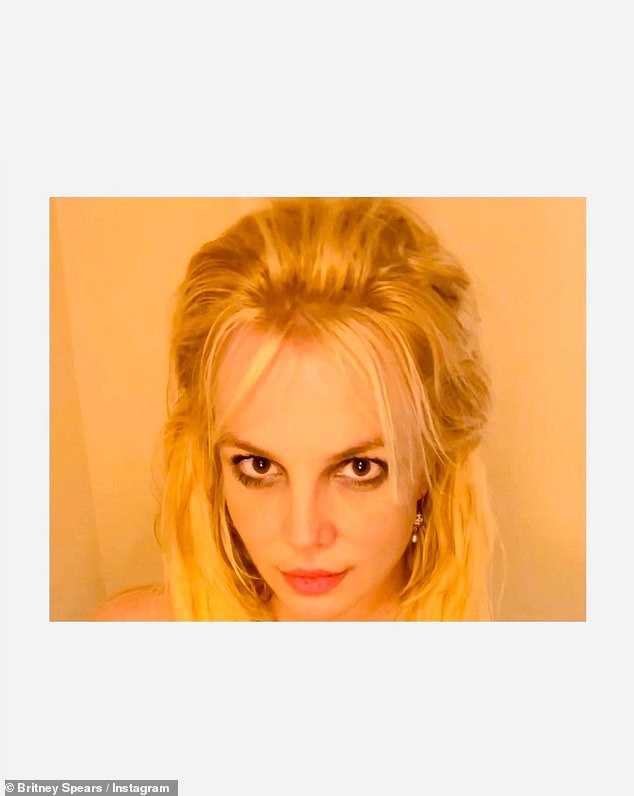 Different lighting: Britney tried out several different kinds of lighting for her face

The 28-year-old actor and 41-year-old pop star sat under a gorgeous skyscape as they faced each other in a meditative state and shared a kiss.

Sam wrote in his caption: ‘A little hike & a little meditation on Christmas Day [go] a long way.’

There was lush greenery around them as the Baby One More Time hitmaker wore a dark long-sleeved shirt and leggings.

Her famous blonde locks were styled in tight waves as they tumbled down her back and over her chest. 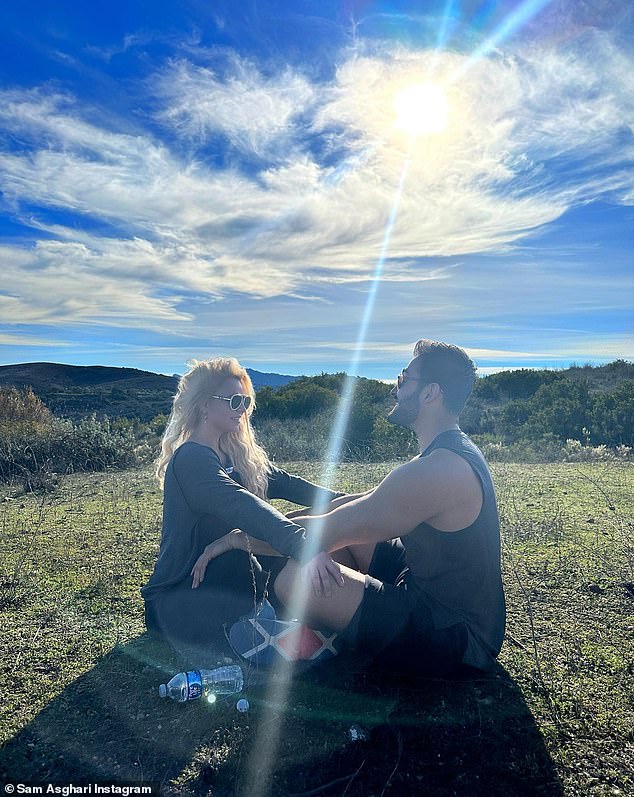 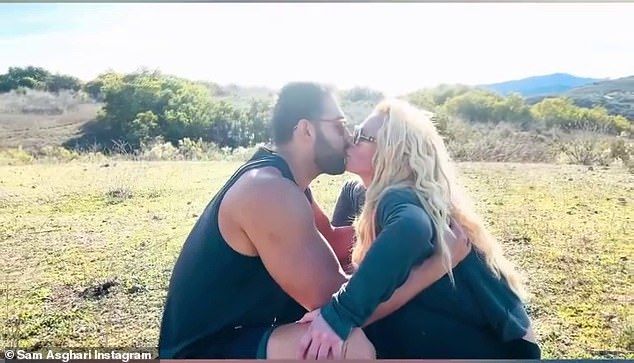 Precious moment: The 28-year-old actor and 41-year-old pop star sat under a gorgeous skyscape as they faced each other in a meditative state and shared a kiss

Sam gushed about Britney as he added, ‘my wife is really becoming a meditation guru and I love it.’

He then wished his three million followers well as he finished, ‘Merry Christmas to you all.’

Asghari, known for roles on shows like Black Monday and Doll Face, wore a black tank top that bared his brawny arms.

His signature beard was neatly and closely trimmed and both he and Britney wore sunglasses.

Spears, who was emancipated from her 13-year-long conservatorship last year, beamed at the camera after smooching her man.

The post racked up more than 83,000 likes within two hours of being posted. 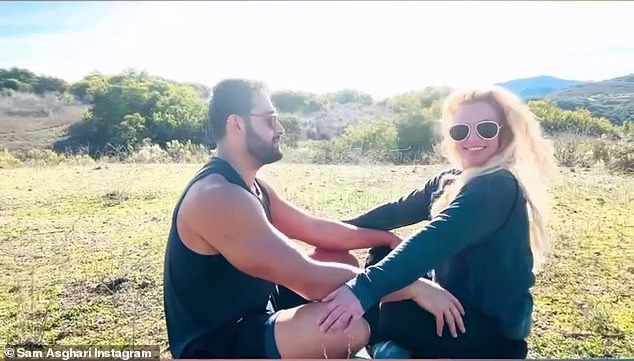 His thoughts: Sam wrote in his caption, ‘A little hike & a little meditation on Christmas Day [go] a long way’