Britney Spears and Iggy Azalea sent words of support to each other and reminisced about collaborating on their 2015 song ‘Pretty Girls.’

There’s nothing but love between Britney Spears and Iggy Azalea. The “Baby One More Time” singer, 39, took to Instagram on Tuesday, Sept. 7 to gush about her Australian collaborator, 31, who she worked with on the 2015 song “Pretty Girls.” Britney shared a series of photos of the two on stage and thanked the “strong” and “badass” Iggy for her “kind words.” 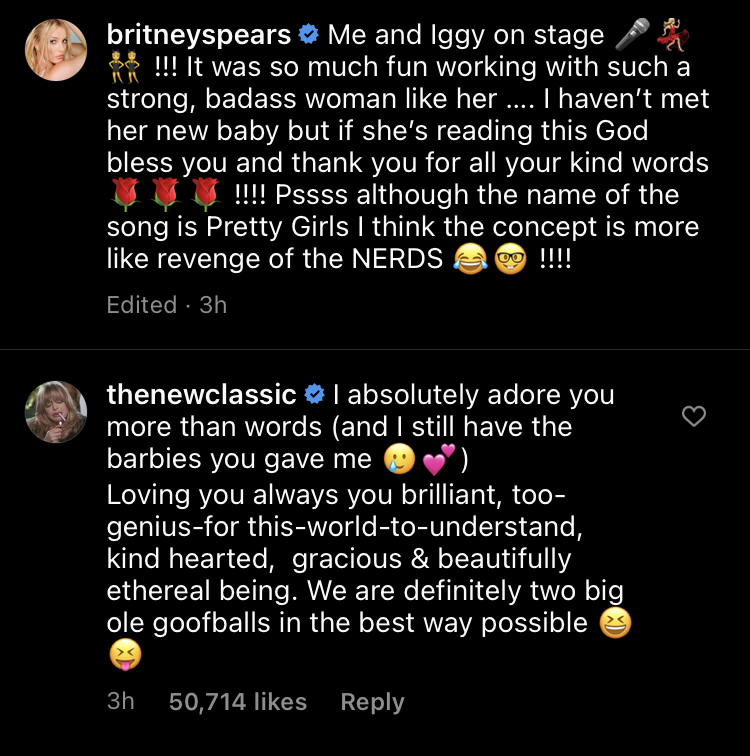 “Me and Iggy on stage,” Britney captioned the post. “It was so much fun working with such a strong, badass woman like her …. I haven’t met her new baby but if she’s reading this God bless you and thank you for all your kind words 🌹🌹🌹 !!!! Pssss although the name of the song is Pretty Girls I think the concept is more like revenge of the NERDS.”

The “Fancy” rapper offered a sentimental response in the comments section. “I absolutely adore you more than words,” she wrote. “Loving you always you brilliant, too-genius-for this-world-to-understand, kind hearted, gracious & beautifully ethereal being. We are definitely two big ole goofballs in the best way possible.”

The lovefest came just a few hours after reports that Britney’s estranged father Jamie filed a petition to end his daughter’s conservatorship. After 13 years under the legal arrangement, the Spears patriarch, 69, filed the petition in Los Angeles Superior Court and maintained that Britney was “entitled to have this Court now seriously consider whether this conservatorship is no longer required.”

After Britney’s first court hearing in June, Iggy — along with other celebrities — voiced her support for the star and said she “witnessed” Jamie’s behavior that Britney detailed in court when they worked together on “Pretty Girls.”  “It’s basic human decency to at the very least remove a person Britney has identified as abusive from her life. This should be illegal,” she began her lengthy statement (above), later adding, “Britney Spears should not be forced to co-exist with that man when she’s made it clear it is negatively impacting her mental health.”