A triumph that takes us deep into the unforgettable hell of WWI: BRIAN VINER’s five-star review of Sam Mendes’s new war movie 1917

Last year’s remarkable documentary They Shall Not Grow Old, a treasure trove of original but newly- colourised First World War footage, showed that no big-screen dramatisation of trench warfare would ever be quite right, for one striking if prosaic reason: In real life, soldiers’ teeth, almost without exception, were terrible.

In every other respect, however, the audience at last night’s Royal Film Performance was propelled back to the Western Front with the same extraordinary, visceral power, such is the skill of Sam Mendes as a film-maker and the bold simplicity of his story. 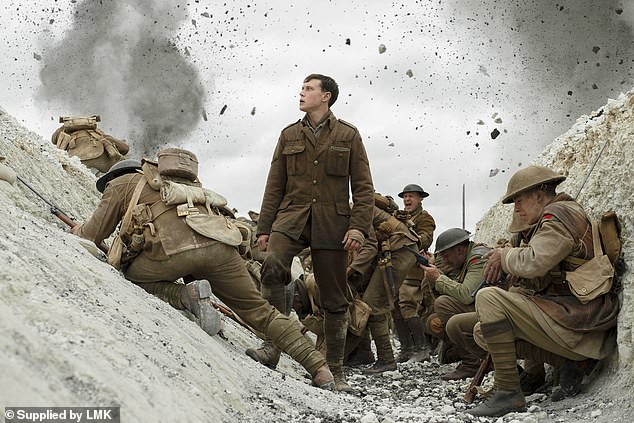 George MacKay stars as Schofield, a corporal with an epic mission, in a new war-time film 1917, and reminder that most war heroes come from the ranks

Instead, this is an account of a perilous but straightforward mission, by a pair of lance corporals handed the challenge of delivering a message intended to save the lives of 1,600 men.

To do so, they must cross battle-ravaged no-man’s land and the Germans’ abandoned front line, at immense personal risk.

It is a fictionalised tale, but inspired by stories told to the director by his late grandfather, Alfred Mendes, who was awarded a Military Medal for bravery during the 1917 Battle of Poelcappelle and to whom the film is dedicated. 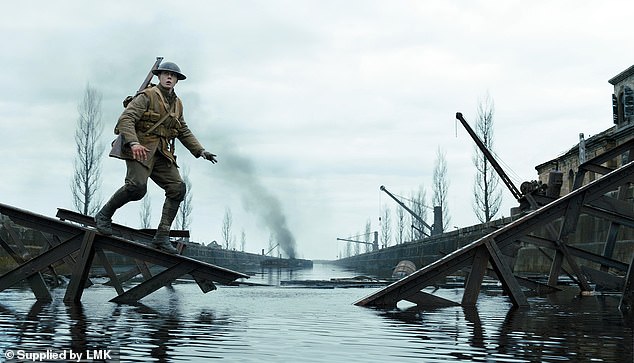 The film centres around two young British soldiers during the First World War who are given the mission of delivering a message, deep in enemy territory, that will stop one of their own brother’s from walking into a trap. Both main protagonists show a fierce instinct to survive and pass on the message to save 1,600 men

So this is an intensely personal project. However, Mendes would be the first to concede his debt to veteran British cinematographer Roger Deakins, who won an Academy Award for depicting the future in Blade Runner 2049 and is a strong contender for another – for evoking the past.

He takes us with these men on their harrowing journey by filming in what appears to be (but isn’t, quite), a single continuous take. The effect is thrillingly, at times knuckle-chewingly immersive. 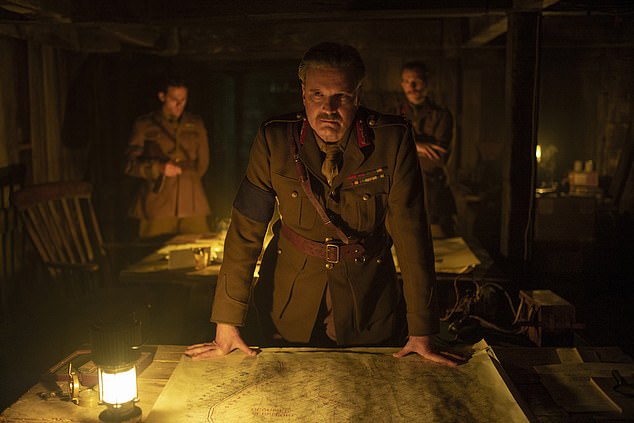 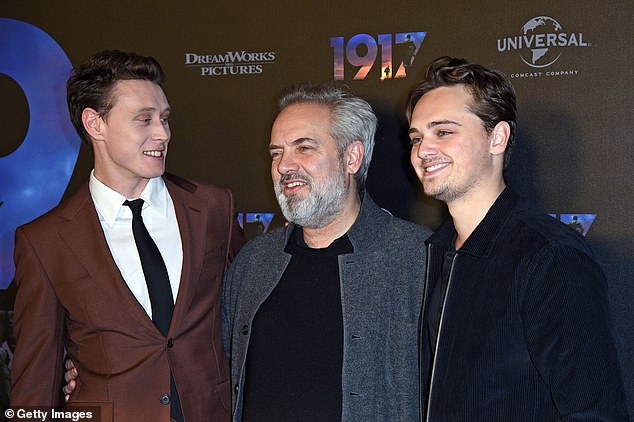 George MacKay, Mendes and Dean-Charles Chapman attend a photocall of 1917 at UCI Luxe Mercedes Platz on November 28 in Berlin, Germany

Mendes has picked cinematic titans Colin Firth and Benedict Cumberbatch to play the top brass. Mark Strong and Andrew Scott play officers, too. But astutely, he has cast as his two corporals a pair of actors you might recognise but struggle to name, in George MacKay and Dean-Charles Chapman. They are the stars, handily reinforcing the message that most war heroes come from the ranks.

Chapman plays Blake, chosen because he is good at map-reading and also has a beloved older brother with the endangered division. 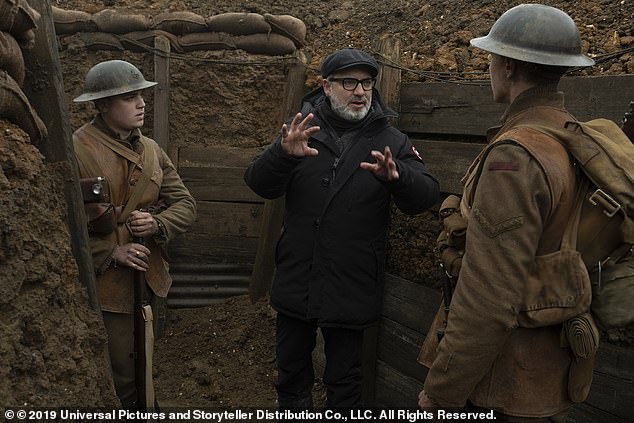 Mendes takes the viewers on a thrillingly, at times knuckle-chewingly immersive experience in his new film which appears as though it was created in one single take

A general (Firth) explains tersely that the Germans have retreated, and the field commander (Cumberbatch) is about to order an advance, not knowing what aerial reconnaissance has shown, that the enemy has only retreated to lure them into a heavily fortified trap. 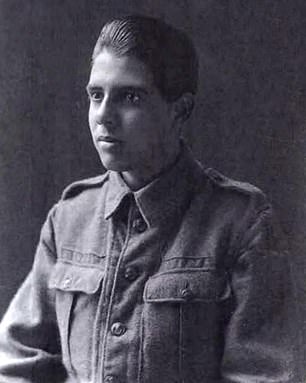 Personal project: The film is inspired by stories told to Mendes by his late grandfather, Alfred Mendes (pictured), who was awarded a Military Medal for bravery during the 1917 Battle of Poelcappelle

With phone wires cut, only messengers can stop the otherwise inevitable carnage. So Blake picks his friend Schofield (MacKay) to join him, and their grim-faced captain (Scott) sends them off with a ‘cheerio’ that is anything but cheerful.

After that, they are on their own, except of course that we are with them every step of the way, past the putrefying corpses of men and horses and even cows (shot by the Germans to remove a source of food), through booby-trapped, rat-infested trenches and on into other equally unforgettable visions of hell.

Mendes’ last two pictures were Skyfall and Spectre, featuring oodles of British derring-do, James Bond-style. But 1917 depicts a different kind of courage, forced on two ordinary young men by a fierce sense of duty, yes, but an even fiercer instinct to survive. It is a stunning film. 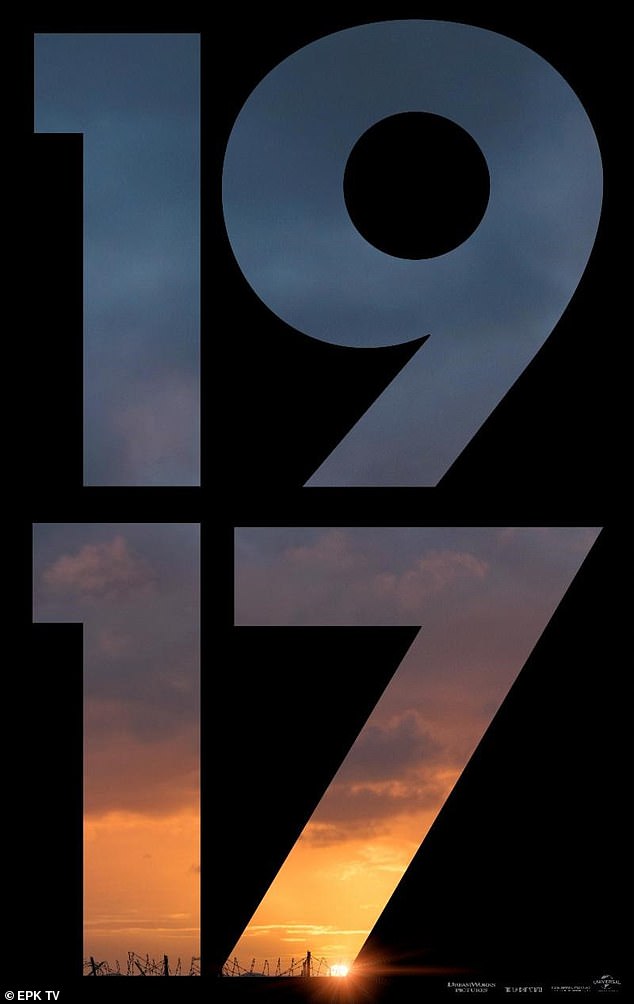