Real Housewives Of Beverly Hills star Brandi Glanville brought evidence on Sunday to strengthen her case that she hooked up with her costar Denise Richards multiple times.

The 47-year-old reality star tweeted out part of a text message conversation she allegedly had with Denise to bolster her claim that the two spent the night together in the actress’ Northern California cottage.

The messages seem to back up Brandi’s story that 49-year-old Denise made the initial invitation, thought the evidence was not a slam dunk. 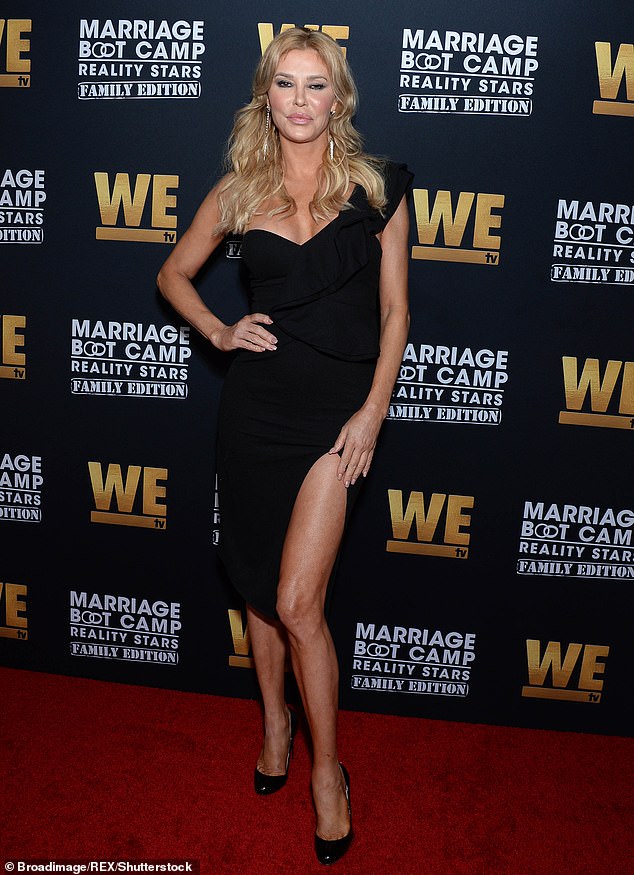 Receipts: Brandi Glanville, 47, tweeted a screenshots of texts on Sunday that were allegedly from Denise Richards, 49, bolstering her claim that they hooked up; pictured in October 2019

‘Listen to my podcast from Friday & you’ll know why Denise asked me to specifically say I was staying at the hotel across the way when I wasn’t!’ Brandi tweeted.

‘It’s because her daughter had a friend with her & she didn’t want the parents of the friend to know that I was staying in the room!!’

She tweeted again shortly afterward to claim she could prove her overnight visit with Denise via unaired RHOBH footage.

‘Also you will hear the uncut version on housewives which proves that I stayed with Denise we didn’t know we were recording but we were. Be Patient all will be revealed,’ she wrote.

More details: First, Brandi claimed that unaired Real Housewives Of Beverly Hills footage proved that she and Denise spent the night together. She also claimed the actress told her to lie about their tryst 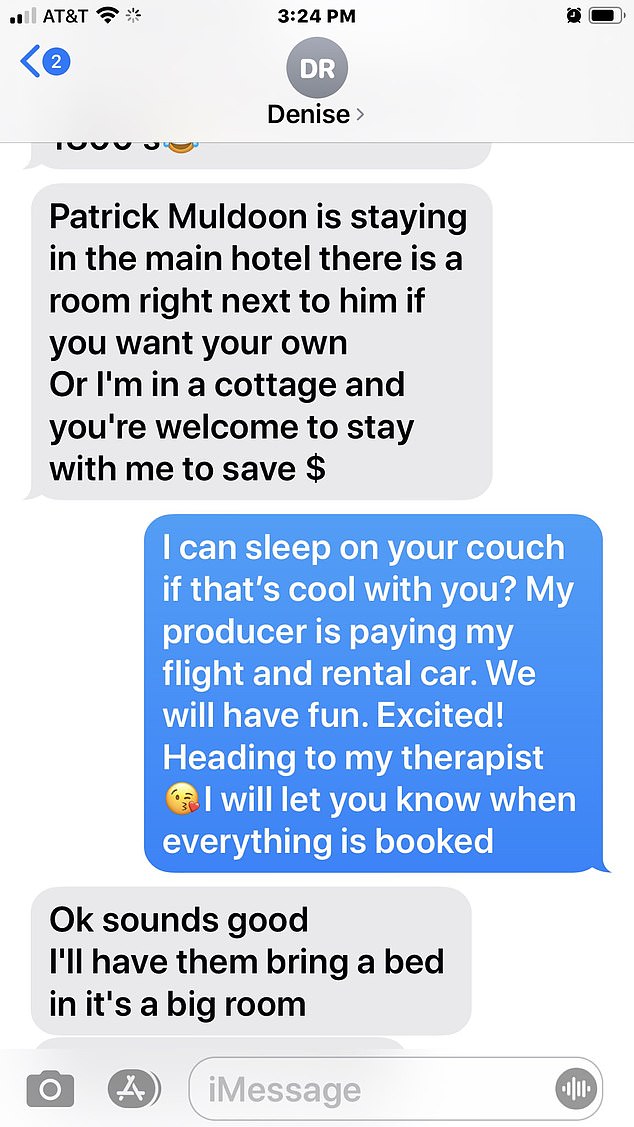 Next up was a text messages purportedly sent to Denise, which seemed to strengthen Brandi’s contention that the two women spent the night together.

‘I’m in a cottage and you’re welcome to stay with me to save $,’ Denise wrote.

‘I can sleep on your couch if that’s cool with you?’ Brandi replied. ‘My producer is paying my flight and rental car. We will have fun. Excited! Heading to my therapist [kissing heart emoji]. I will let you know when everything is book.’

Denise replied and wrote, ‘I’ll have them bring a bed in it’s a big room.’ 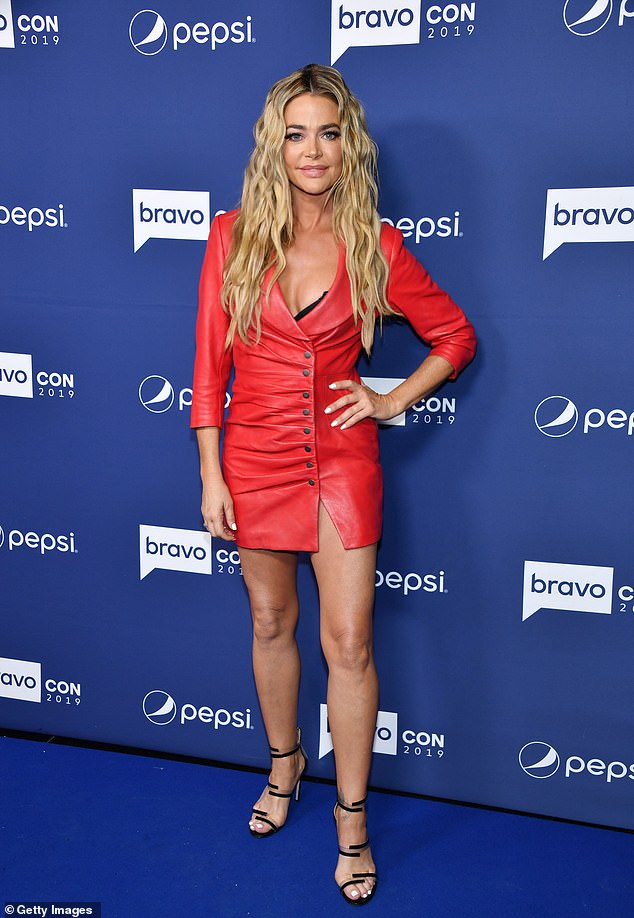 Careful wording: Denise previously denied having an affair with Brandi to the Washington Post, but she didn’t specifically deny that Brandi stayed at her cabin; shown in November 2019

Meanwhile, CelebMagazine have obtained further text messages alleged to have been sent between the pair.

In these messages, Brandi allegedly writes: ‘First & for most It was never my intention to speak about it because I was ashamed and I had guilt and you will see that, first you make me into a cheater Something I would NEVER KNOWINGLY be involved in.’

‘We could have had a conversation about it and put all this to sleep,’ Brandi adds, ‘but then you go to Rome tell everyone crazy lies about me and call me a liar. So now I’m not just a cheater but I’m a cheater and a liar thank you Denise.’

;I have to explain this to my children. I have nothing more to say to you right now.’

Denise then allegedly responds, ‘Brandi do you really think I would ever do that? And that is news to me.’ ‘I don’t know what they told you but that is an absolute lie. I never brought your name up to any of them and at Bravocon I spoke very highly of you.’ 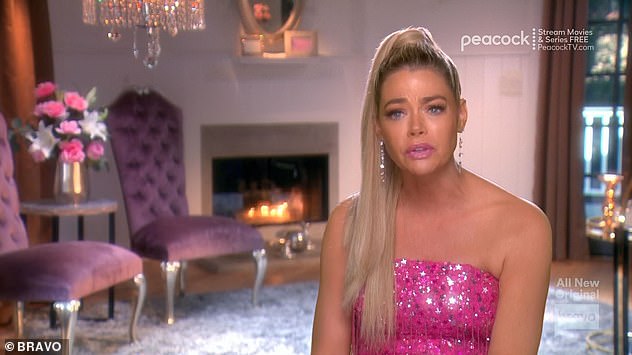 Straightforward: ‘I did not have an affair,’ Denise told the Post. ‘There’s definitely consistency with the subject matter that comes up on this Housewives season, and that’s all I’ll say’

She allegedly continues: ‘There is still time that you and I can fix this so our families don’t have to endure this bullsh*t.’

In the texts obtained by CelebMagazine, Denise does not deny the affair and appears to more concerned with protecting their families, allegedly writing: ‘It’s apparent that you & I are scapegoats for their drama at the potential expense of our kids’

Denise previously denied to the Washington Post she was having an affair with Brandi, but she did not specifically deny that Brandi stayed at her cabin.

‘I did not have an affair,’ she told the Post in a profile published Thursday. ‘There’s definitely consistency with the subject matter that comes up on this Housewives season, and that’s all I’ll say.’ 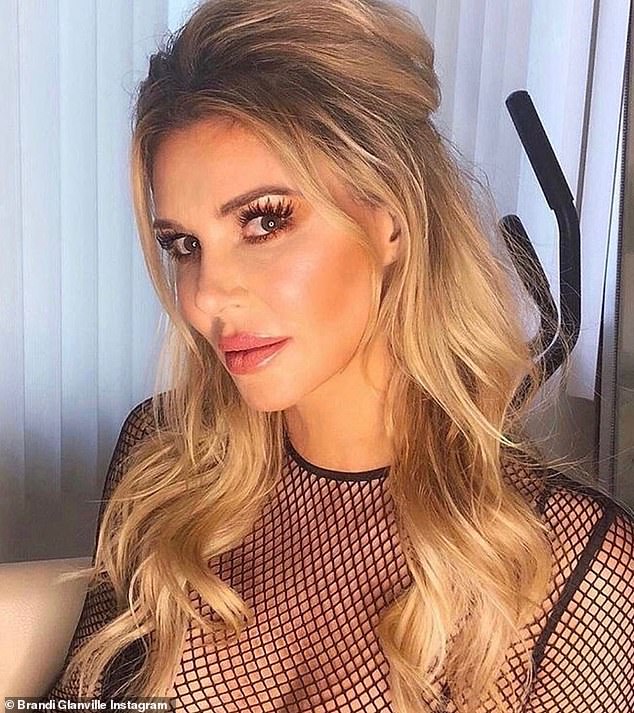 Affair scandal: On Wednesday episode, Brandi claimed to have had multiple trysts with Denise Richards, which the former Bond girl has vehemently denied; pictured in 2012

On Wednesday’s reunion episode, Brandi finally delved into claims of an affair with Denise Richards, which were first reported on earlier this year.

The former model claimed their first sexual encounter took place the night they met, during a dinner that was shown in season nine of RHOBH.

‘We completely click, we get absolutely wasted, we go to the restroom, and all of a sudden, we’re making out,’ Brandi said. ‘I wasn’t expecting it, but I was like, “All right, I’ll go with it! I’m wasted, you’re pretty, let’s do this!”‘ 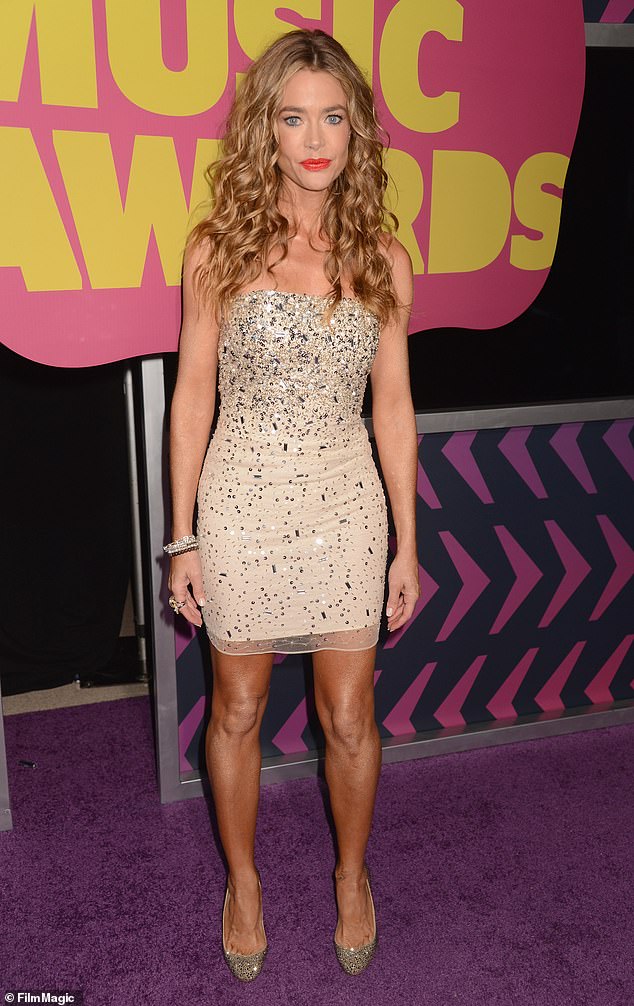 Close encounter: The reality star said the first hookup was in the bathroom of a restaurant the night they met; pictured in 2012

She claimed Denise later invited her to a set in Northern California, where she spent the night with the actress and her children in her cottage.

‘There was no roll-away bed, conveniently,’ Brandi said. ‘So I just slept in the bed with Denise.

‘The first night I was there, we just had a good night, we’re hanging out,’ she told the women. ‘The next night we got really drunk; we were so f***ed up, and we kind of hooked up.’ 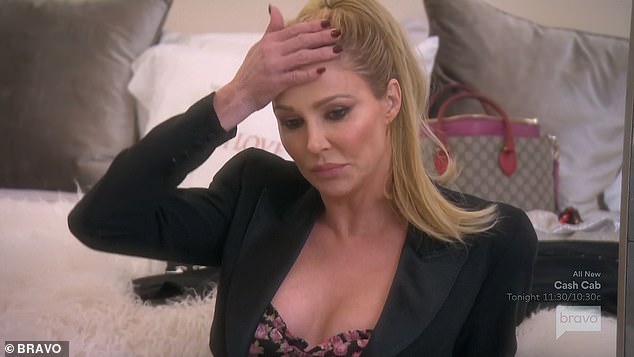 Getting hot: ‘We completely click, we get absolutely wasted, we go to the restroom, and all of a sudden, we’re making out’

Although Brandi said she was under the impression that Denise had an open relationship with Aaron, in which she could have affairs with other women but not men, she said she later found out that Denise didn’t have such an arrangement.

Though she forcefully denied the affair in the Washington Post, Denise has yet to speak about it on RHOBH, though a teaser for next week’s episode indicated that Teddi will alert her to Brandi’s disclosure.

Brandi’s main complaint seems to be that Denise allegedly lied about having an open relationship, forcing her to keep it secret and making her feel like a homewrecker.