EXCLUSIVE: Boy George has ‘moved on’ from his criminal past after undergoing a ‘strong recovery’, says ex-boyfriend after I’m A Celeb star was accused of hypocrisy for threatening to quit over Matt Hancock’s arrival

Boy George will not be affected by his criminal past coming back to light amid his I’m A Celeb stint, says his ex-partner and lifelong friend.

Michael Dunne, who was in a relationship with the Culture Club star, 61, for over a decade after they met in 1984, says George’s conviction is ‘in the past for him, he’s done his time, and has moved on.’

In an exclusive interview, Michael told MailOnline that George has undergone a ‘very strong recovery’ and being surrounded by a ‘support network’ allowed him to build back his life following his previous drug addictions. 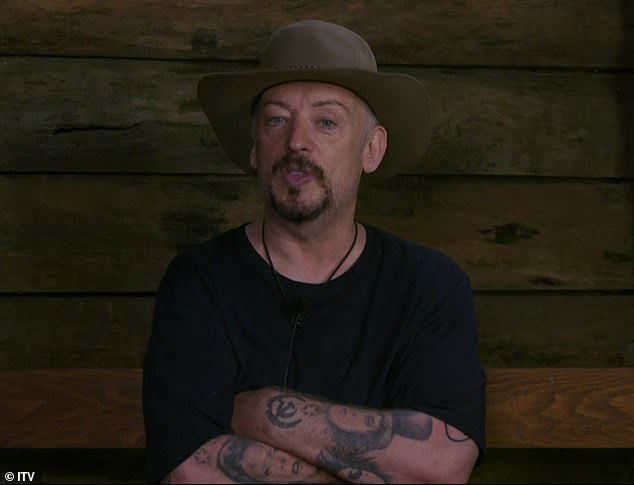 ‘He’s done his time’: Boy George will not be affected by his criminal past coming back to light amid his I’m A Celeb stint, says his ex-partner and lifelong friend

Michael, 61, said: ‘My view is that he has a very strong recovery. He’s got strong people around him who love and support him.

‘What happened in the past is in the past for him. He’s done his time and has moved on. He’s got a really strong recovery platform and that’s a really key for him.

‘He’s got lots of friends in recovery, me included, and he’s got his management team who are fantastic and his family around him. He has the support network and that’s the main thing that keeps you going.’

ITV viewers called George a ‘hypocrite’ for criticising Matt Hancock, 44, despite having been imprisoned for chaining a main to a radiator and assaulting him back in 2007. 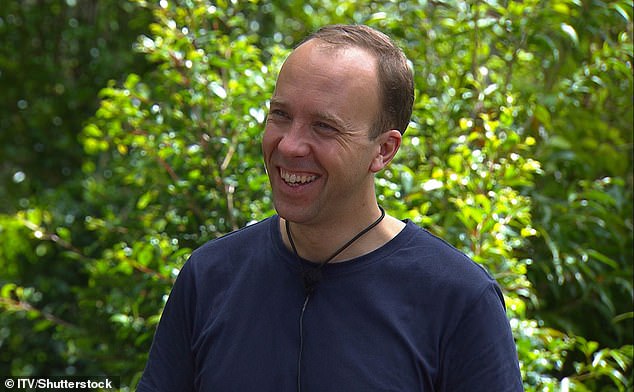 ‘I knew George would be upset’: Viewers called George a ‘hypocrite’ for criticising Matt Hancock despite having been imprisoned for chaining a main to a radiator and assaulting him back in 2007 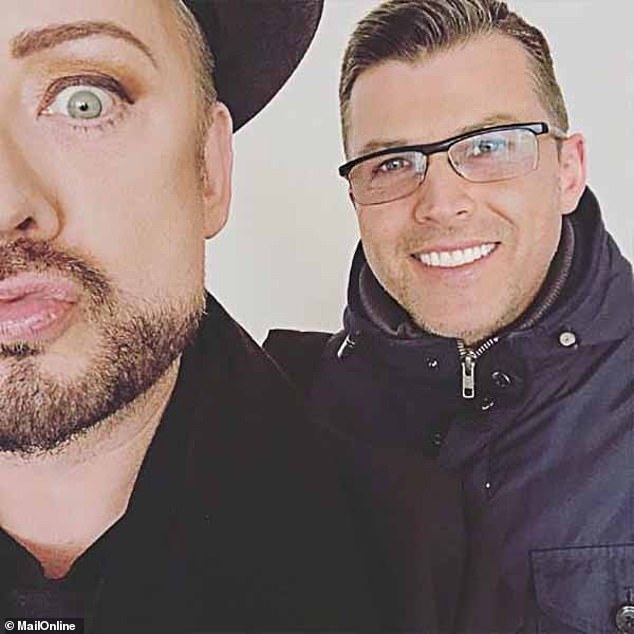 ‘That emotional was real’: George’s ex-boyfriend Michael (pictured)  said he knew the singer would be upset as soon as he knew Matt Hancock was a campmate in the show this year

The singer cried after the ex-Health Secretary arrived in camp last week and said he would have quit the jungle if his sick mother, who he couldn’t visit during the pandemic, had died.

Michael added: ‘I knew George would be upset about it.

‘I remember it very well when his mother was taken to the hospital, I had spoken to him that day and he was very, very, very upset, like everyone else in the country when their mothers, brothers, and grandparents were in hospital, and they couldn’t visit or speak to them. It was a very scary time for him.

‘That emotion he showed in terms of his mum – that is really still quite raw for him. His mum and his family are his life and he’ll do anything for his family. That emotional was real.

‘People watching it across the country can probably identify with that quite strongly. We’re still feeling the after-effects of that period quite strongly.’ 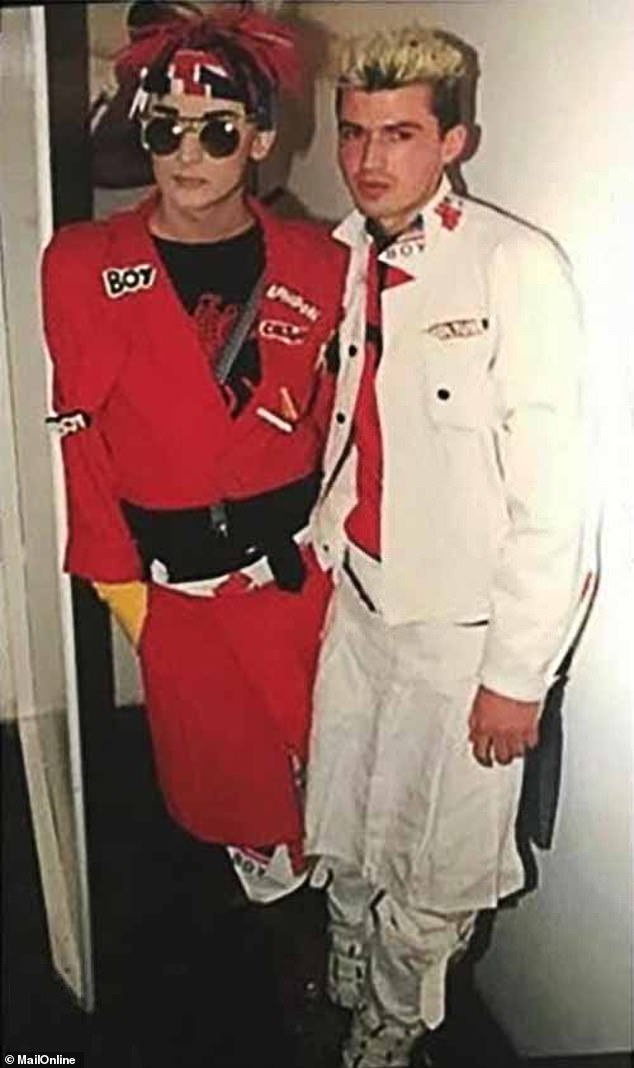 ‘I love him dearly’: George and Michael, pictured in their twenties, dated for over 10 years but have ruled out ever getting back together despite still being close friends

Tensions between George and Matt are predicted to rise after the Tory MP was voted camp leader in Sunday night’s show.

George said: ‘Listen, I’m not anti-Matt, but I’d rather have him not ruling me.

‘If Matt was to become camp leader and I feel like he’s doing something I don’t agree with, I won’t do it.

‘Ultimately neither of them will have any power over me. If I don’t want to do something, I won’t do it.’

The Eighties singer even started to plot a ‘revolution’ after Matt won the title of camp leader over Mike Tindall, 44, and was given special privileges, such as delegating jobs and sleeping in the show’s comfy RV.

Michael, who works for the NHS, added: ‘What the public are seeing is the real him.

‘He’s a strong person, he’s strong willed and compassionate, he emotions are front and centre of everything he does.’ 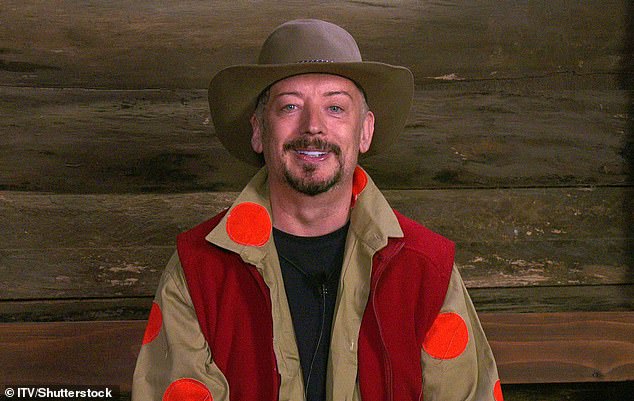 ‘Proud’: Michael says he hopes to see George win I’m A Celeb and believes he can go the distance due to wearing his heart on his sleeve, being strong and motivated, enduring a lot of hardship in life

Michael believes George’s coping mechanisms, including chanting and meditation, will keep him level-headed in camp.

He said: ‘They will work for him in the jungle. It’s a good tool to do that and he’s been practicing that for years. We used to go to Buddhist meetings in London in the 80s so he’s been doing it a long time.

‘It takes a lot of commitment to do that, particularly in the world we live today where it’s digitalised and everything is so fast paced. Something like that gives you grounding.’

George and Michael are still close friends after being in a romantic relationship for over 10 years – but have ruled out ever getting back together.

The pair, who are both sober after previously suffering from drug addiction, have travelled the world together, Michael celebrates Christmas with George’s family, and they were even born just 14 days apart, making them both a Gemini.

Watching his friend in the jungle has been ‘entertaining’ for Michael and he hopes to see George win, revealing that the singer is strong and prepared to take on any challenge.

‘We had a relationship for over 10 years, and we had some very good times and we had, like any partnership, our ups and downs.

‘We parted ways in 1996 and I went off and got myself back on the right path.

‘I’m in recovery and have been in recovery since 1996 but we have stayed friends ever since I’m like the adoptive brother now, I am with them most Christmases.

‘It’s still a very strong relationship, we’re very good friends. I love him dearly and I want the best for him always.

‘I am really proud of everything George has done and I really hope he can carry on proving himself and that we’ll see him win.’