A host of stars have descended on South London for the annual Wimbledon Championships this week.

And leading the glitzy arrivals for the third day of the tennis tournament on Wednesday was former world number one  Boris Becker, who made his first public appearance with Layla Powell, who he was last seen out with in March when they pictured on a cosy restaurant date.

Between watching the matches, the tennis legend, 51, and the stunning British model, 31, gazed at each other adoringly while engaging in deep conversation.

Layla looked ace when she dressed in tennis white for Wimbledon as she showcased her model figure in a summery dress.

The knee-length number featured button-down detailing which were left sexily unbuttoned to her upper thighs and a belt to accentuate her waist.

Boris didn’t let his glam girlfriend as he looked dapper in a powder blue suit which he has contrasted with a bright red baseball cap.

The stars are out: A host of famous faces descended on Wimbledon for day three of the tennis tournament including (L-R) Strictly’s Tess Daly, Made In Chelsea’s Lucy Watson, Hunger Games star Sam Claflin and Carole Middleton 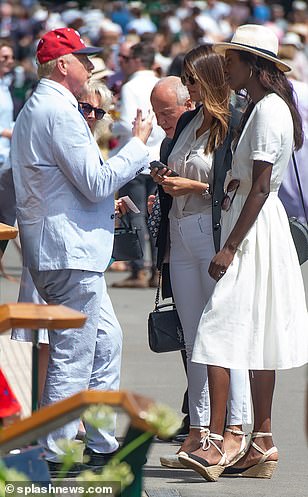 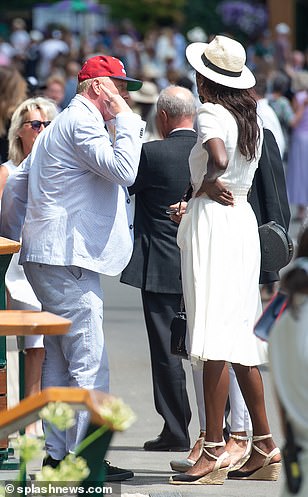 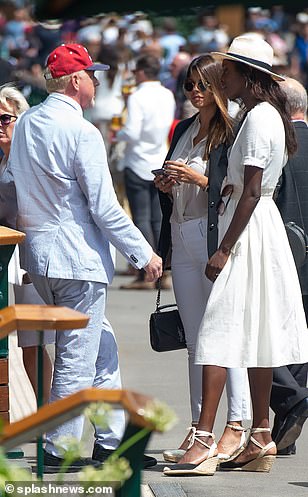 Getting on well: The couple had fantastic fun as they made the most of their day at the tennis 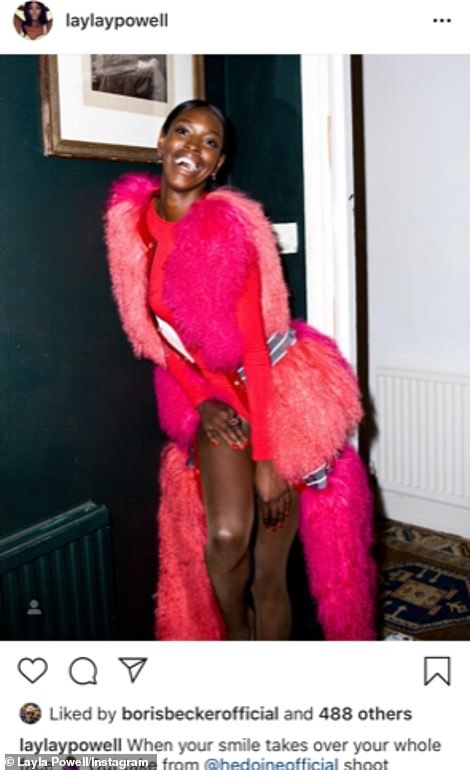 He’s a fan: Boris has been liking a series of Layla’s sexy Instagram posts in recent weeks, including this one of her flashing her underwear in hotpants 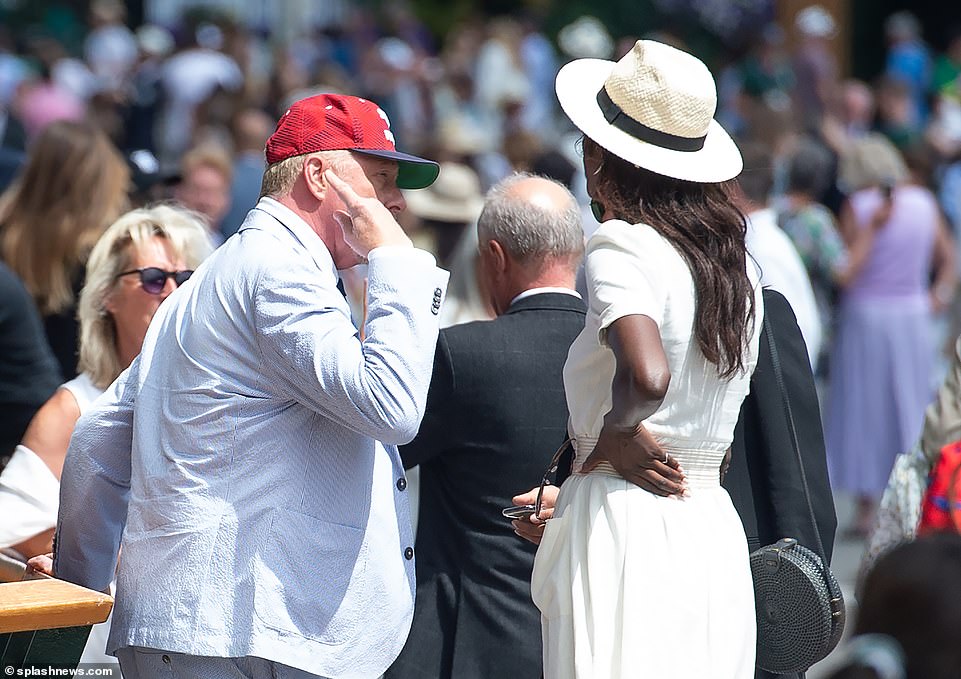 Close bond: The tennis legend, 51, and the stunning British model, 31, looked at each other longingly as they gave each other eye contact while engaging in deep conversation 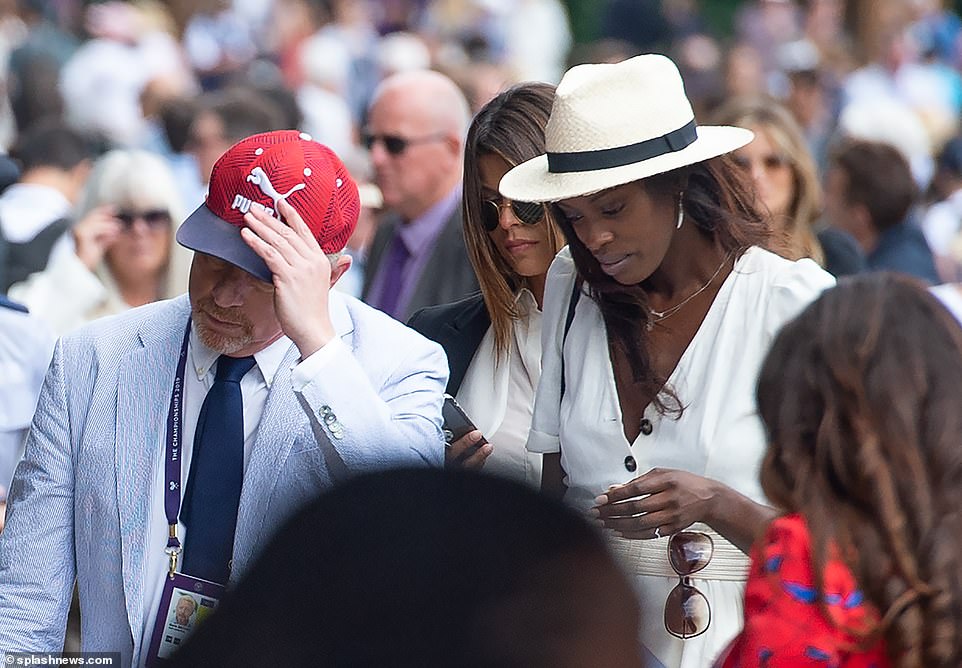 Handsome: Boris didn’t let his glam girlfriend as he looked dapper in a powder blue suit which he has contrasted with a bright red baseball cap 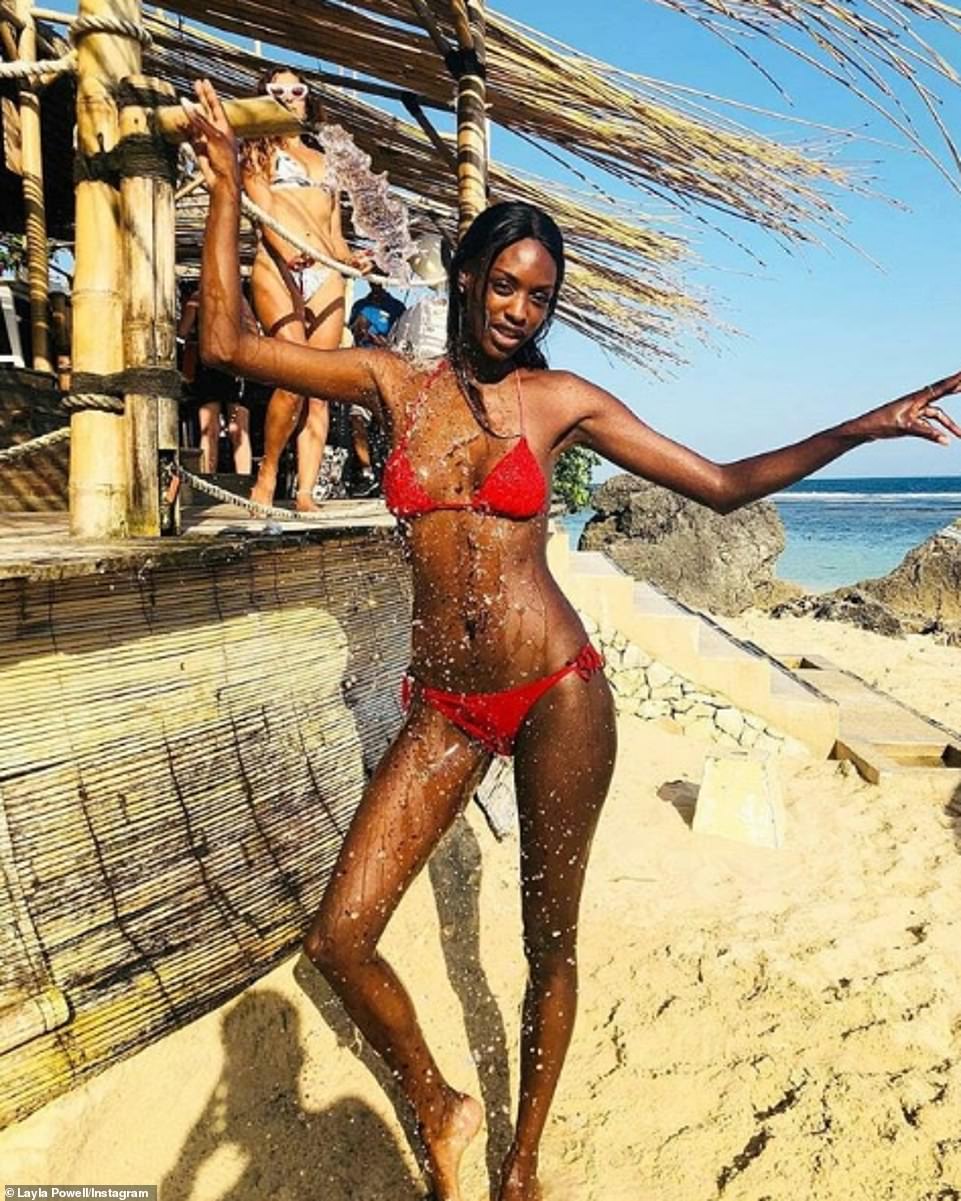 Could it be? British model Layla is twenty years Boris’s junior and it’s been reported that she and Boris were in the restaurant together until 2am 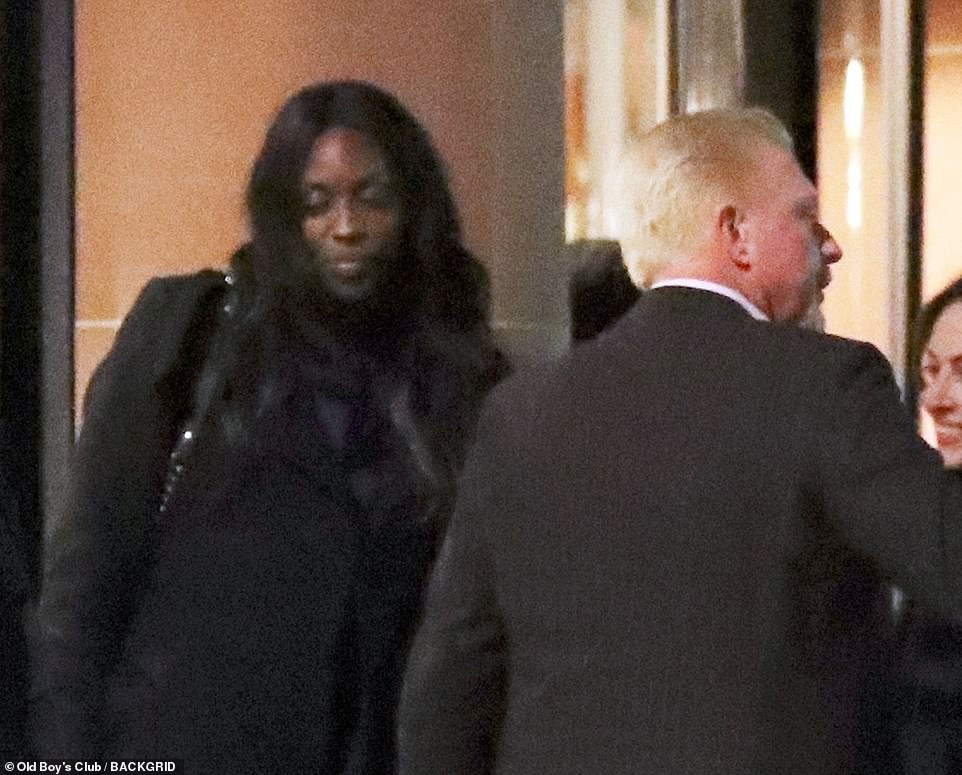 First pictured together: As for Boris and Layla, sparks were flying between the duo as things continued to heat up four months on from their intimate restaurant date at C in London in March

Risking it: Lilly Becker risked an awkward run in with her ex and his new love when she attended Wimbledon with a pal

Boris and Layla weren’t the only smitten couple at the tennis, as Strictly Come Dancing host Tess, 50, exuded elegance in a pastel pink one-shoulder gown, which featured a pretty lace overlay as she packed on the PDA with husband Vernon, 45 in the Royal Box on Centre Court.

The couple, who tied the knot in 2003 – looked happier than ever as they stared into one another’s eyes when they took their seats on Centre Court, with Tess smiling lovingly at her handsome love.

Love, Rosie actor Sam, 33, was delighted as he made his way into the Grand Slam championship, and looked every inch the English gentleman in a three-piece suit. 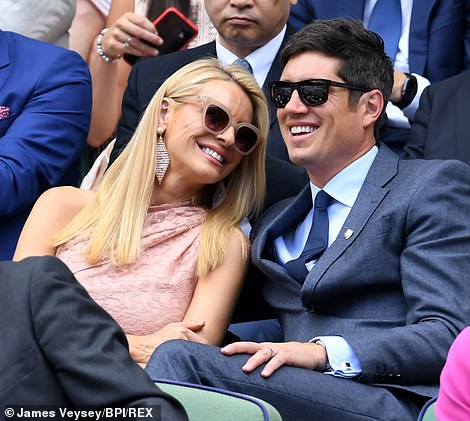 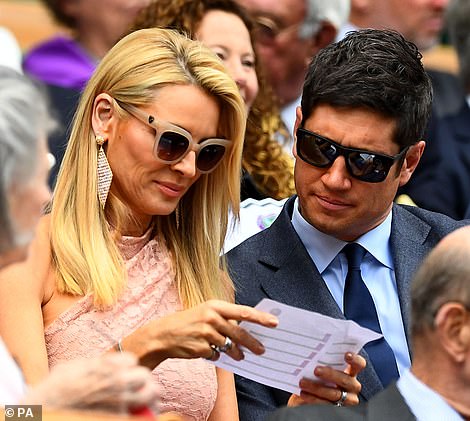 Adoration: Tess Daly looked smitten with husband Vernon Kay as they joined Sam Claflin and Lucy Watson at the star-studded third day of the Wimbledon Tennis Championships on Wednesday 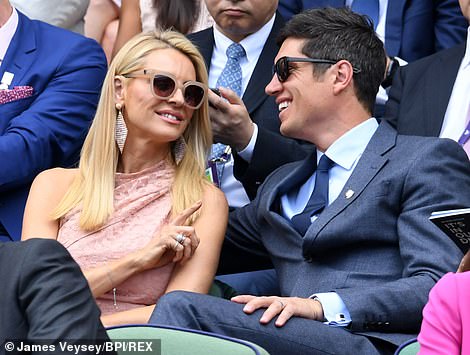 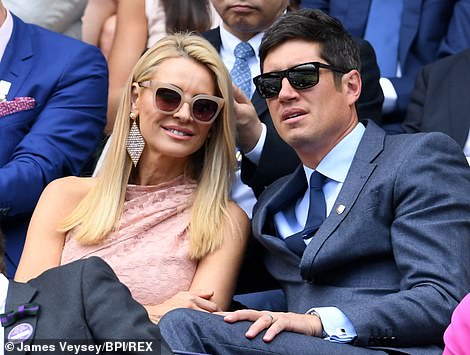 Look of love: Tess’ platinum tresses were styled sleek and straight with a pair of nude cat-eye shades hiding her sparkling peepers from the sun 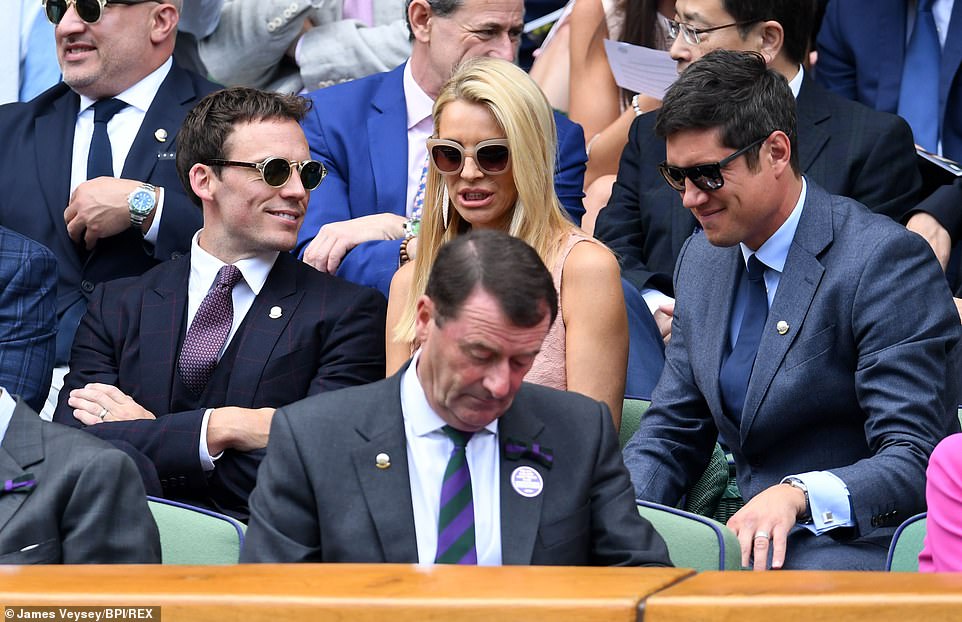 Here he is: The couple were spotted chatting with actor Sam Claflin, 33, as they took their seats

The star donned a crisp white shirt and mauve polka dot tie, paired with a black tailored waistcoat with red check for his day of tennis action.

Former Made In Chelsea star Lucy Watson, 28, put on a leggy display in a scarlet floral off-the-shoulder dress with a ruffled hem as she arrived at the Evian Live Young suite at the tournament.

Baking icon Mary Berry, 84, took her rightful seat in the Royal Box with the tennis fan exuding elegance in a navy dress with chic floral overlay.

The former GBBO judge looked glamorous in the multicoloured gown with semi-sheer sleeves as she chatted with loved ones.

Handsome: Love, Rosie actor Sam, 33, was delighted as he made his way into the Grand Slam championship, and looked every inch the English gentleman in a three-piece suit 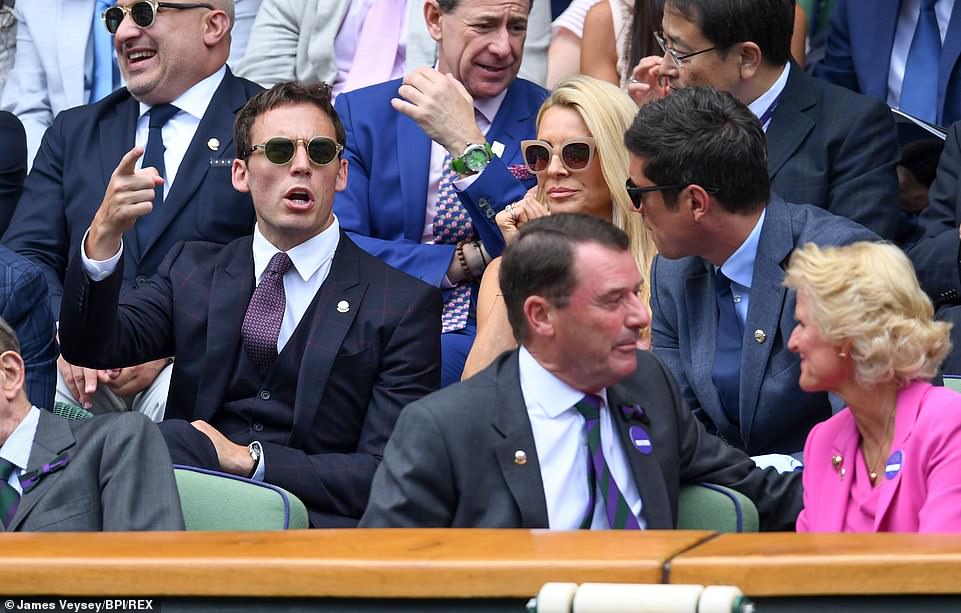 Getting into it: Sam appeared to be cheering as he chatted with the couple ahead of the match

Day three of the prestigious tournament will see defending men’s singles champion Novak Djokovic face off against Denis Kudla of the United States in the second round.

British number one Kyle Edmund will play Spain’s Fernando Verdasco in his second round match.

Caroline Wozniacki will play Veronika Kudermetova of Russia in her second round match after Spain’s Sara Sorribes Tormo was forced to retire in the first round.

And British number two Heather Watson will play Estonia’s Anett Kontaveit in her second round match. 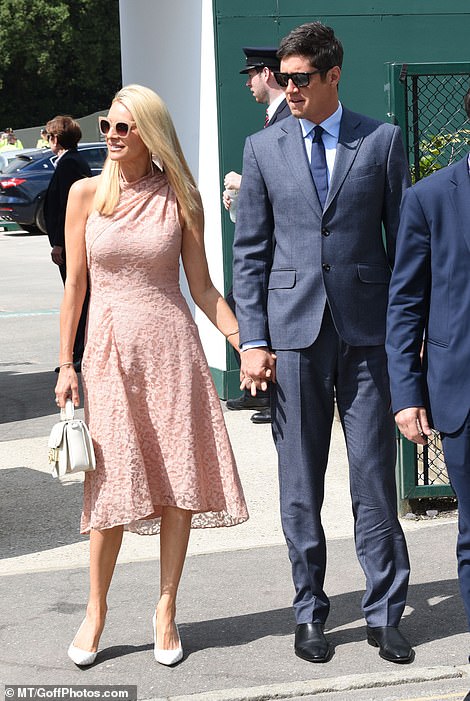 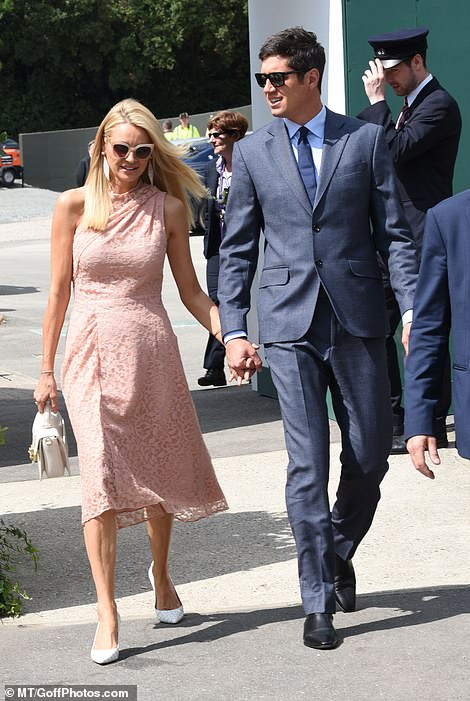 Wow: Cinching in at the star’s slender waist, the pretty pink gown gown flared into an elegant A-line skirt, teamed with white stilettos

Tennis fanatics burst into Wimbledon for the first day of the world’s greatest tennis championship on Monday after 5,000 people spent up to 48 hours in queues outside sleeping in 600 tents.

Huge crowds were waved into the All England Club in sun-soaked south-west London with almost 500,000 people expected over the coming fortnight with armed police brought in to keep them safe.

Security guards walked the spectators past the famous ivy-covered Centre Court with Djokovic beginning the defence of his men’s singles title there from 1pm. 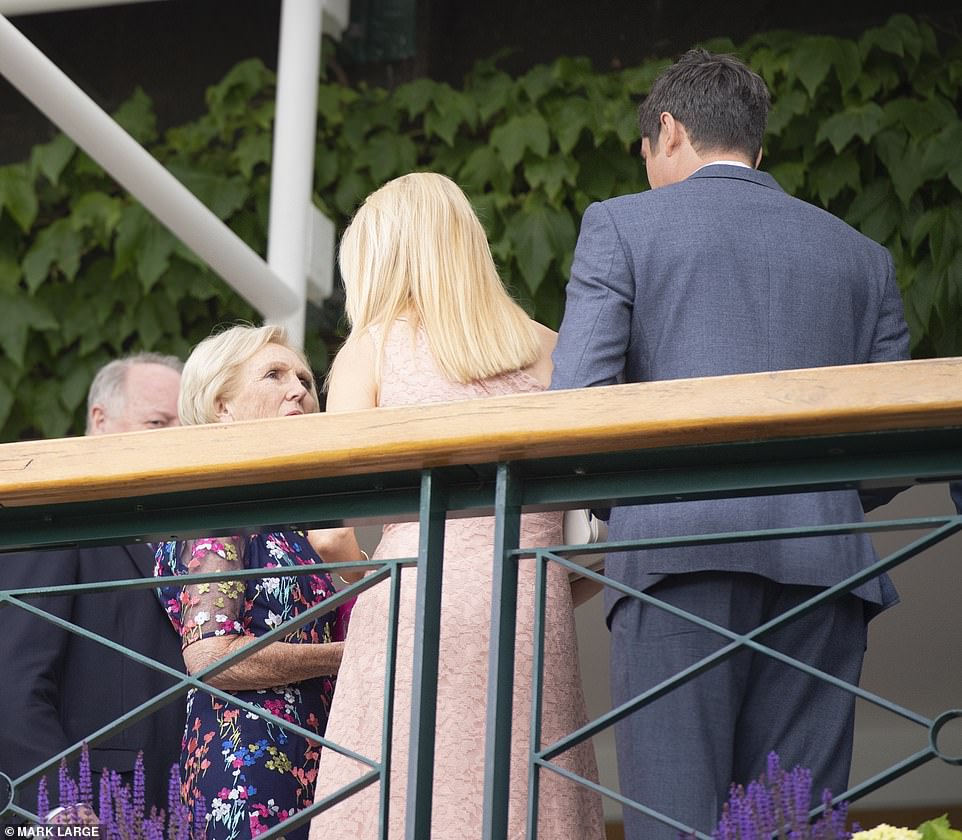 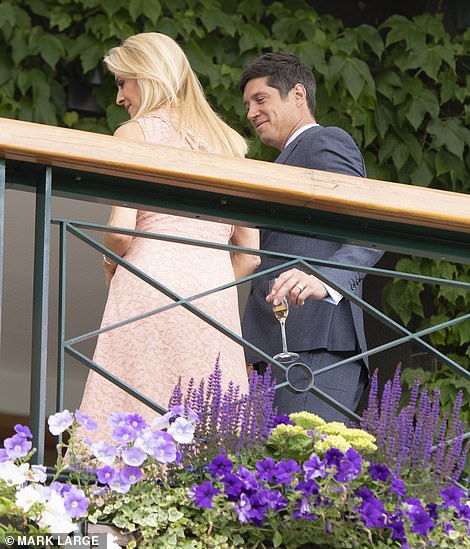 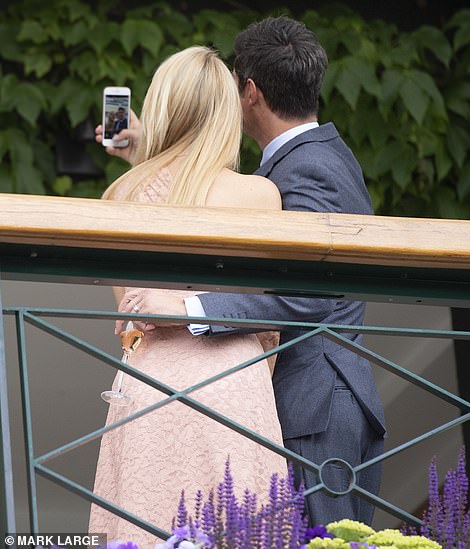 Star-studded: The couple looked smitten as they enjoyed the hospitality at the tournament

Thousands slept outside The All England Tennis Club overnight having pitched up over the past two days hoping to get tickets for Wimbledon, which began in 1877 and is considered the most important sporting event of the British summer along with the first Test Match at Lord’s each year.

And many claim that queuing for tickets is ‘as much a part of the Wimbledon experience as the tennis itself’.

As for Boris and Layla, sparks were flying between the duo as things continued to heat up four months on from their intimate restaurant date at C in London.

In the lead up to their steamy date, Boris had been liking an endless stream of Layla’s sexy Instagram posts. 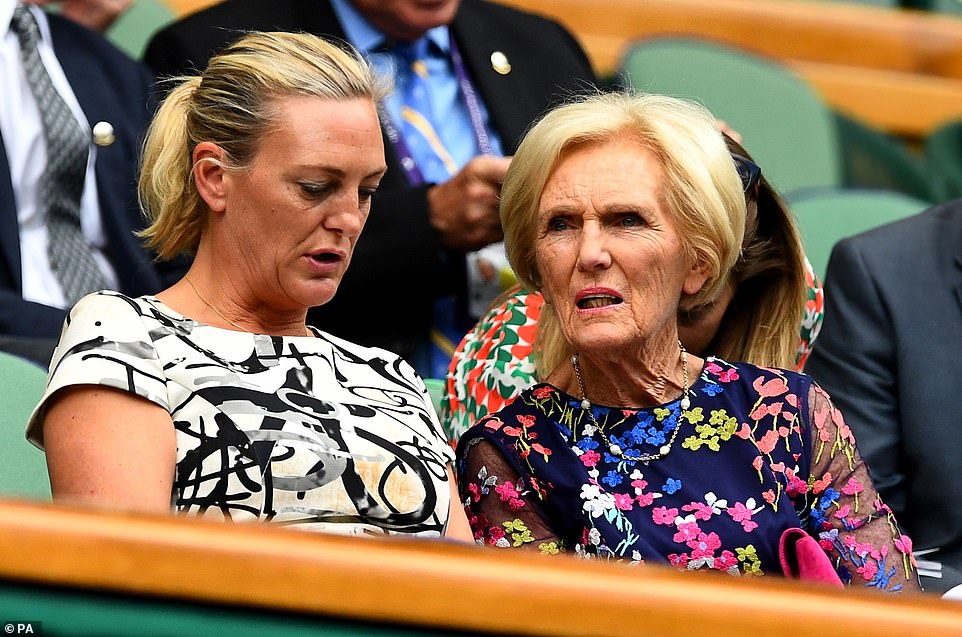 Baking royalty: Mary, 84, was seen taking her seat in the Royal Box while looking stylish in a floral dress 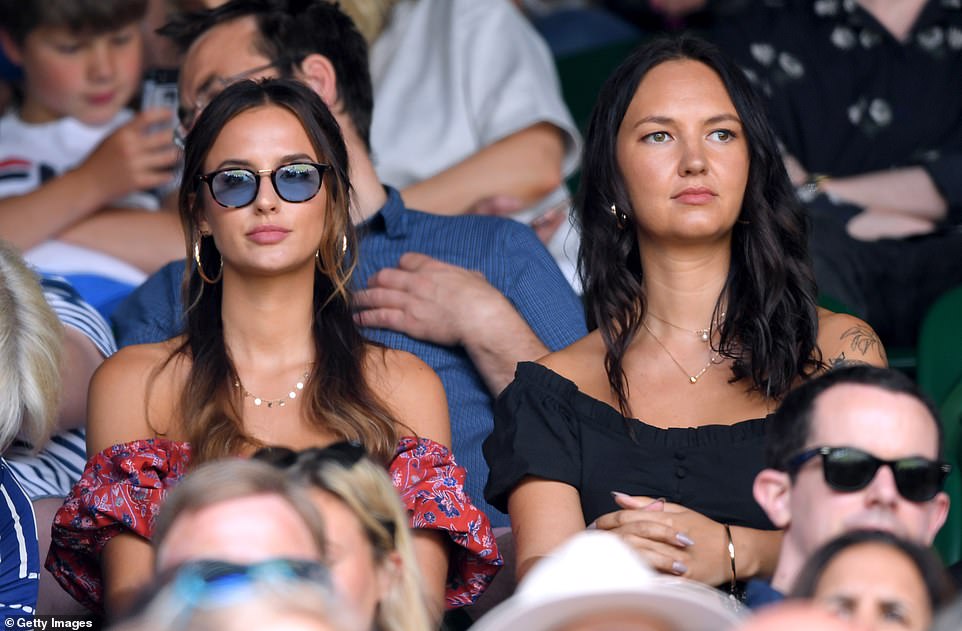 Showtime: The ex reality starlet looked gorgeous in her summer dress as she took in the tennis action with a friend

German site Bild reported Boris and British model Layla were in the restaurant until 2am but his lawyer told the publication at the time he considers himself to be single.

Among the pictures Boris liked, was a picture of Layla flashing her underwear, while wearing hotpants as she drapes herself across a chair.

Boris also took a shine to a picture of Layla wearing leather trousers and high heels while she posed in the toilets of upmarket London member’s club Annabel’s.

MailOnline has contacted a spokesperson for Boris Becker for further comment. 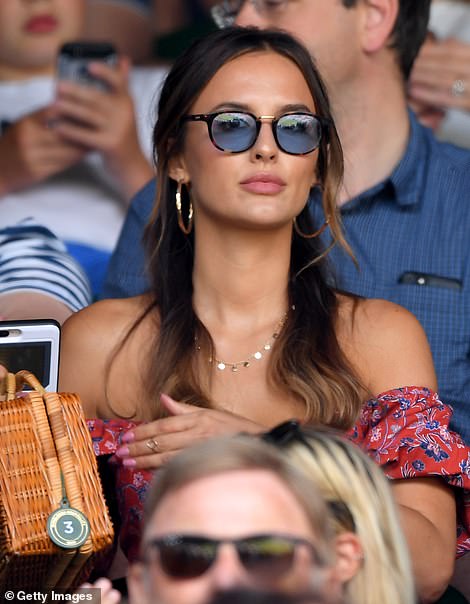 Stylish: The star slipped on blue-tinted shades as she prepared for the Centre Court match

Boris’ outing comes amid reports he is in the ‘final stages’ of divorcing Lilly after the couple announced their split last year.

In December, Lilly reflected on the past year after parting ways from her husband of nine years during an interview with Günther Jauch on Germany’s RTL.

The brunette admitted the couple will never rekindle their relationship. She insisted: ‘It’s really over between us.’ 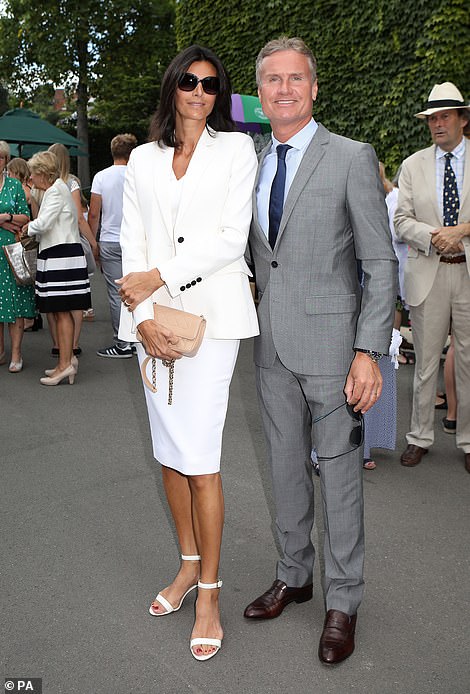 Couple goals: David Coulthard, 48, and Karen Coulthard, 46, arrived in style to take their seats in the Royal Box of Centre Court on day three of Wimbledon

She added: ‘What makes it so bad is that everything is happening in public now. But I married a public man, maybe it’s part of it.’

‘Unfortunately, [a reunion wouldn’t] not work anymore. Too much has happened. I do not want to, he does not, and that’s fine. It’s really over between us.

‘The most important thing is that the future of our son Amadeus is well arranged. It’s not about Boris or me. It concerns the joint custody. He can see his son whenever he wants. Amadeus loves his father, and he loves him.’

Boris and Lilly, who were married for nine years, confirmed their breakup via a German lawyer last year, in a statement given to Bild newspaper.

Lawyer Christian-Oliver Moser said: ‘The decision after a 13-year-long relationship and nine years of marriage wasn’t an easy one.’ 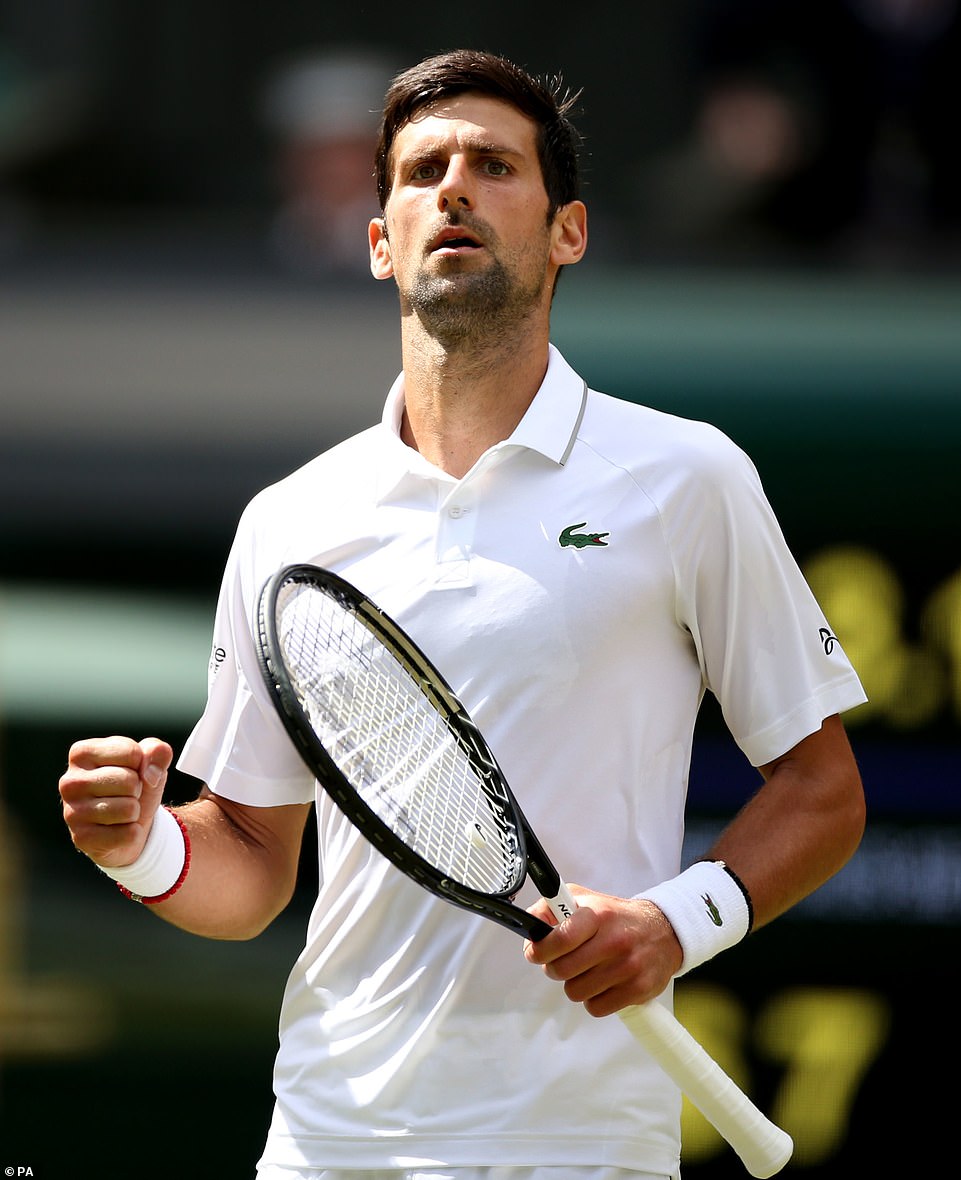 Defending champion: Day three of the prestigious tournament will see defending men’s singles champion Novak Djokovic face off against Denis Kudla of the United States in the second round 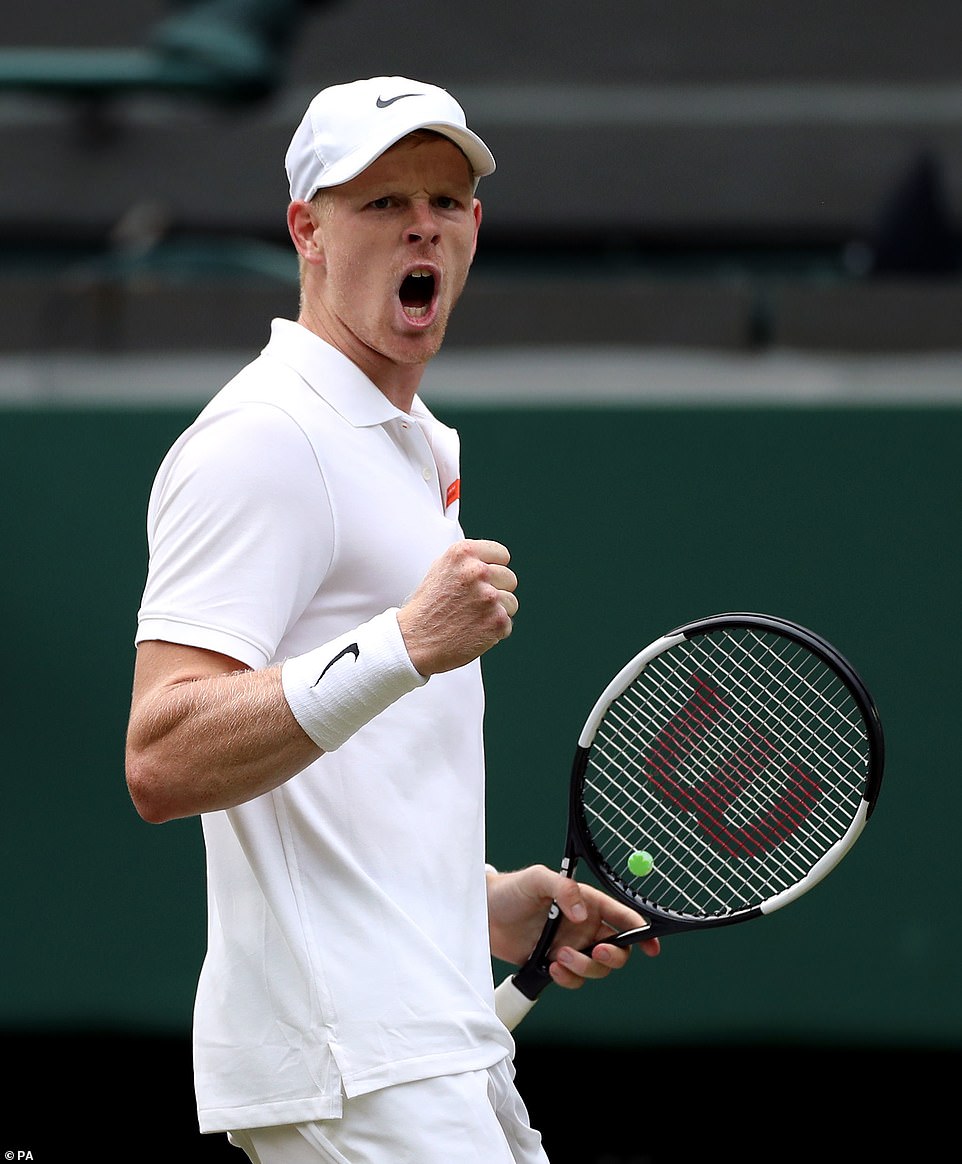 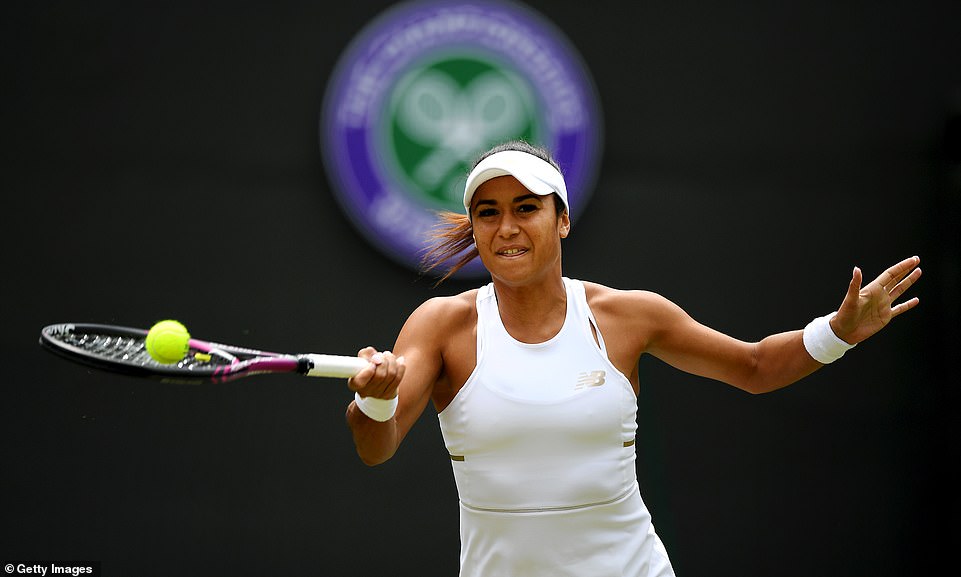 Go for it: Heather Watson of Great Britain plays a forehand in her Ladies’ Singles second round match against Anett Kontaveit of Estonia 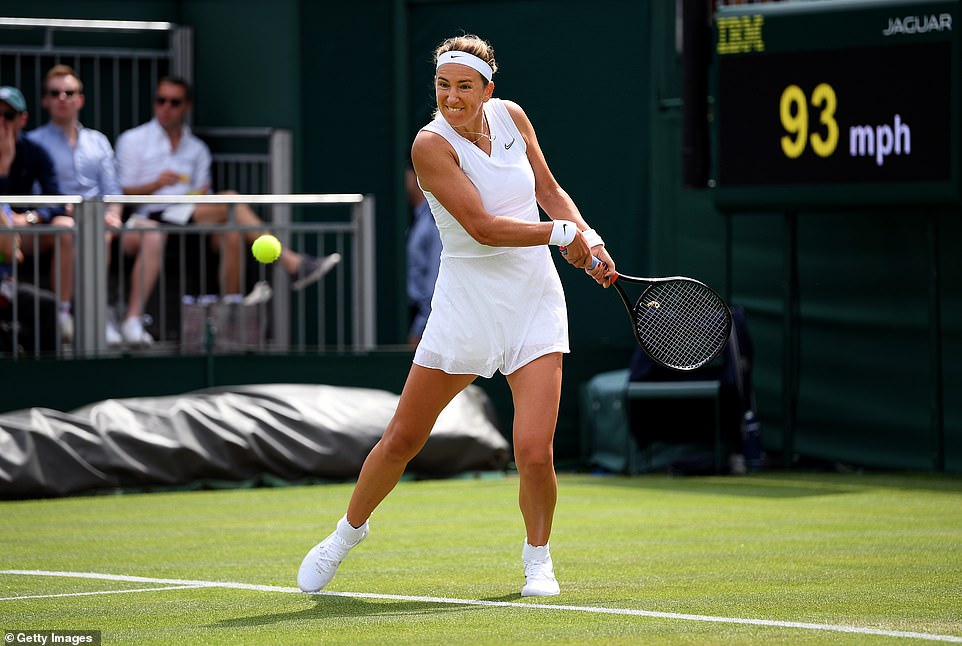 Go for it: Victoria Azaranka of Belarus plays a backhand in her Ladies’ Singles second round match against Ajla Tomlijanovic of Australia