Ben Affleck looked to preemptively settle into the role of step dad during a Sunday outing to Universal CityWalk in Los Angeles.

Affleck was sans JLo but looked to have a handle on the situation, as the blending family was spotted grabbing Wetzel’s Pretzels while taking in the sights at the popular tourist attraction. 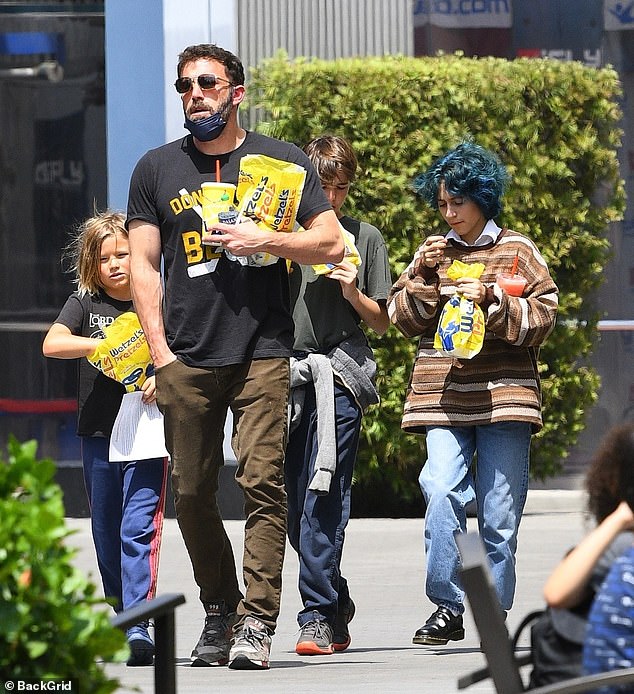 As things get serious between the pair, Affleck has been very involved in the superstar’s children’s lives.

Ben looked every bit the reliable father figure for both he and Lopez’s kids as he strolled around CityWalk with the bunch wearing brown jeans with a black tee that read ‘Don’t poke the bear.’

His only son Samuel wore a Lord Of The Rings T-shirt and blue joggers while his youngest daughter Seraphina kept it comfortable in a green T-shirt with navy pants.

And Emme continued to show off her edgy style in a pair of blue jeans with Doc Martens and a striped sweater layered over a white collared shirt. 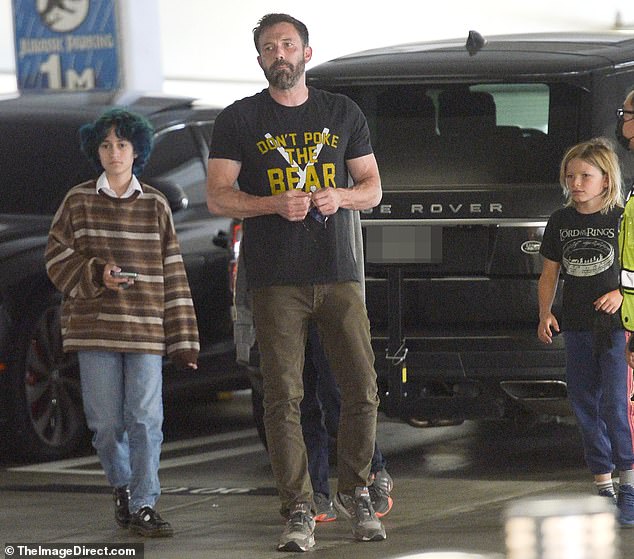 Daddy dearest! The Good Will Hunting actor wore a T-shirt that read ‘Don’t poke the bear’ 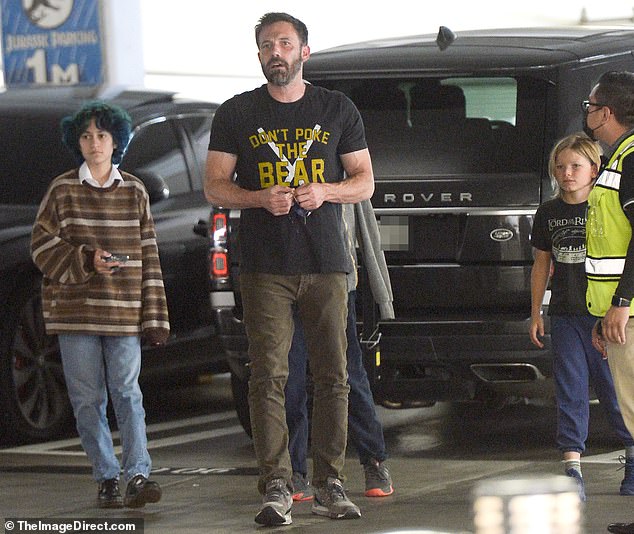 Quality time: He has been spending lots of quality time as of late with Lopez’s kids Max and Emme

While at the fun-filled attraction Affleck and the kids were naturally given A-list treatment as they were seen being led by a guide with a security guard following behind them.

Fueling up for the excursion he treated himself and all three kids to a classic park delicacy — Wetzel’s Pretzels.

And despite her absence, it seems as if Lopez has really begun to envision a life with her former fiancee as she continues to spend extended time in Los Angeles after ditching her Miami life post Alex Rodriguez breakup.

In May she was seen touring a ritzy private school on the westside of LA and on July 10, she enjoyed a second tour of yet another school with her son Max. 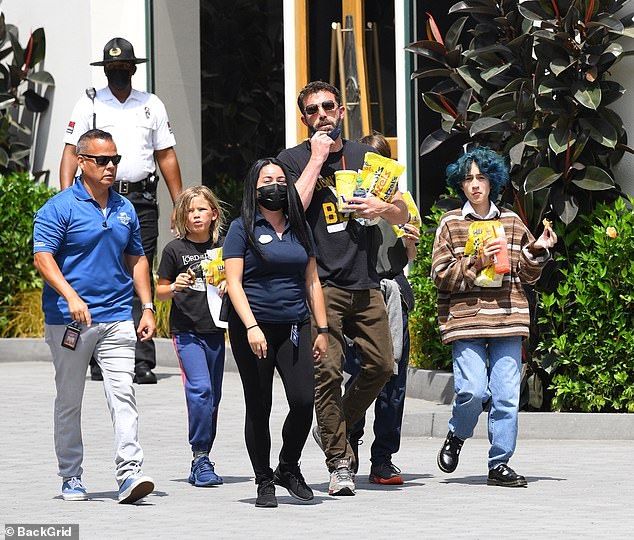 VIP: The blending family were seen getting A-list treatment as they were led by two park attendees and a security guard who followed behind 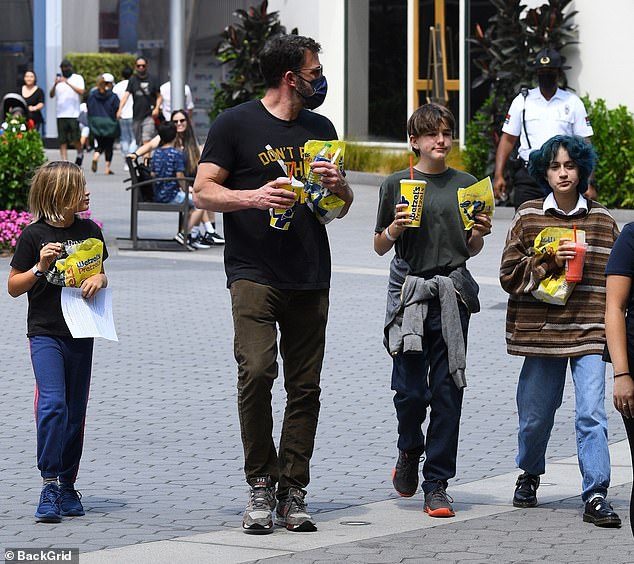 Doting: Throughout the day he looked to make sure all three children were enjoying themselves 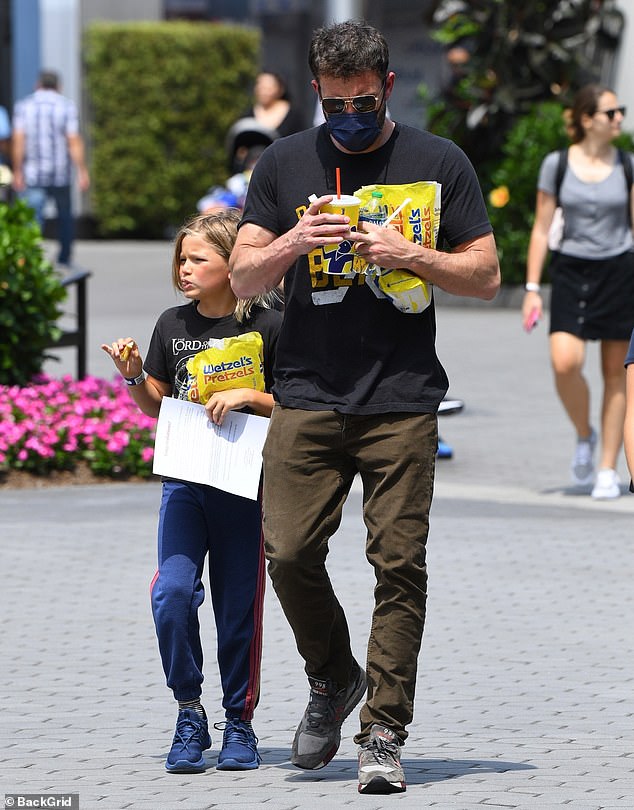 On Friday July 9, she and Affleck were seen stepping out with their kids for lunch at the Brentwood Country Mart.

And though they arrived in separate SUVs the pair were seen leaving together where he lovingly gazed at the Hustlers star.

On July 8, an Us Weekly source spoke on the serious nature of their relationship, as it was reported the pair are set to move in together ‘very soon,’ after spending virtually every night together.

‘Ben and Jen are spending almost every night together when they’re not working. They plan on moving in together very soon,’ an insider shared. 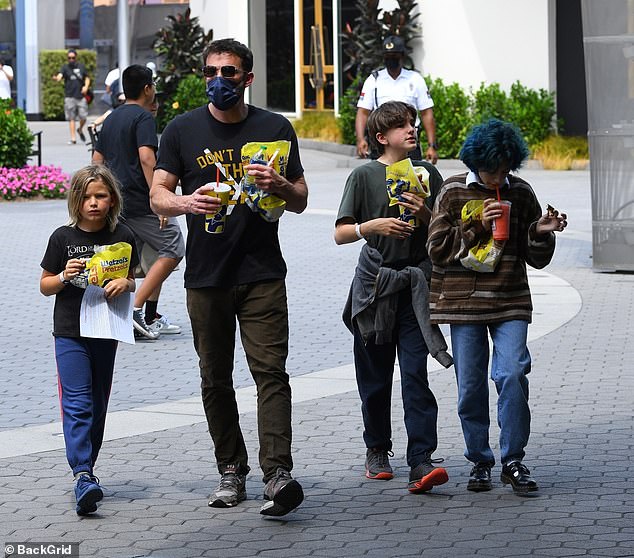 Fueling up! They fueled up with Wetzel’s Pretzels during the outing 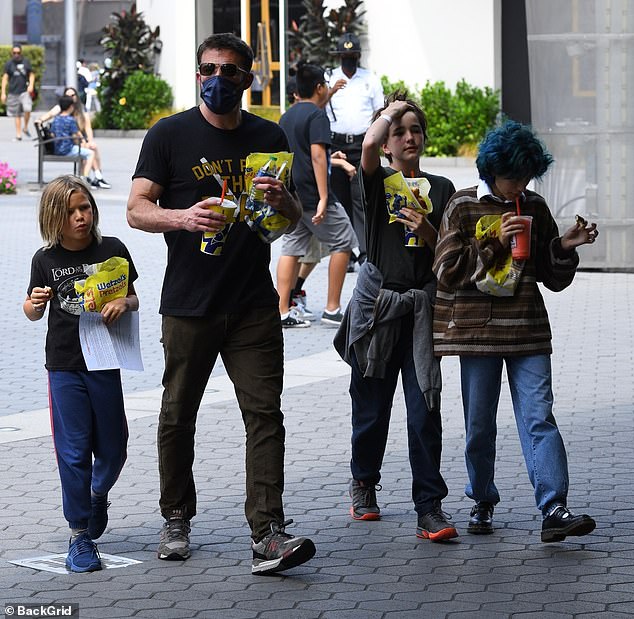 Getting serious: Amid their loved up outings in recent months a source told Us Weekly that the former fiancees are set to move in together ‘very soon’ 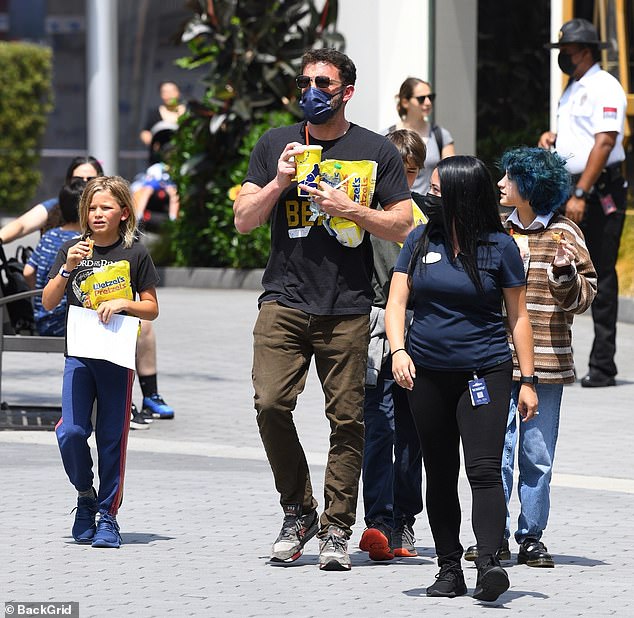 Involved: ‘She intends to be an involved stepmom who’s there for Ben in that area, plus she’ll want him to make the same effort with her and Marc’s kids,’ a source said on July 8

And as evident with Ben’s solo parental outing, the insider also added that the respect and care for each other’s children goes both ways.

‘She intends to be an involved stepmom who’s there for Ben in that area, plus she’ll want him to make the same effort with her and Marc’s kids.’

The pair are also paying no mind to anyone that says they are ‘rushing things,’ despite only rekindling their romance in May — just two weeks after she and A-Rod ended their two year engagement.

Ben reportedly made the first move after he wrote her to tell her how ‘beautiful’ she looked in shots from her most recent film Shotgun Wedding.

And since that time they have enjoyed romantic vacations to Big Sky, Montana, Miami, and most recently on a July 4 trip to The Hamptons. 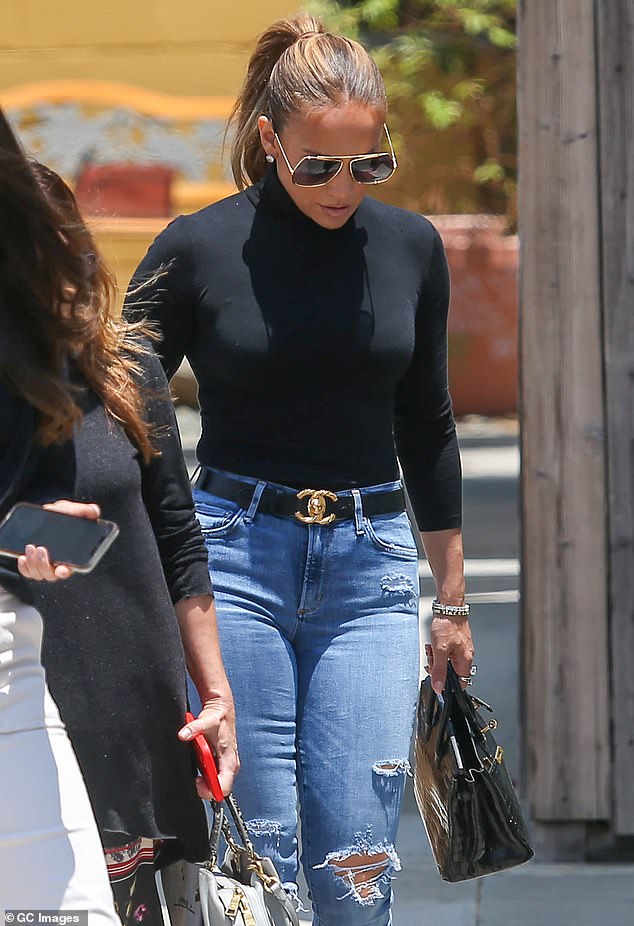 Making a life: As the JLo Beauty founder continues to work towards a life with ‘true love’ Affleck in LA she was seen touring yet another private school with her son Max; pictured July 10