She came out as a proud pansexual in 2019 but seems to have found her forever person.

And Bella Thorne continued to support her LGBTQ+ community on an international scale as she made a surprise appearance at a Pride parade in Milan, Italy.

The 23-year-old actress, joined by her fiance Benjamin Mascolo, greeted the packed parade crowd while rocking a sparkling tiara. 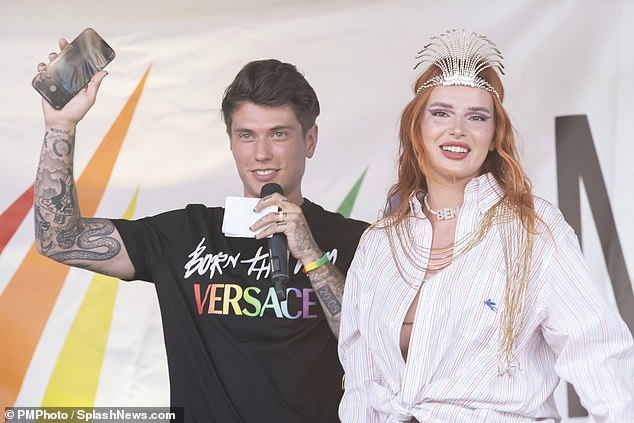 Causing a scene: Bella Thorne, 23, and her fiance Benjamin Mascolo made a surprise appearance at a Pride parade in Milan on Saturday

The Shake It Up actress and the Italian born musician were seen arriving with a throng of security that escorted them through the very bustling parade.

Aside from her eye-catching tiara, Bella was seen in a white button down shirt which she later removed to expose her midriff in a purple bathing suit top which she rocked with paisley shorts.

Thorne slipped her feet into a pair of knee high boots as she and Benjamin waved to excited fans before taking the stage together. 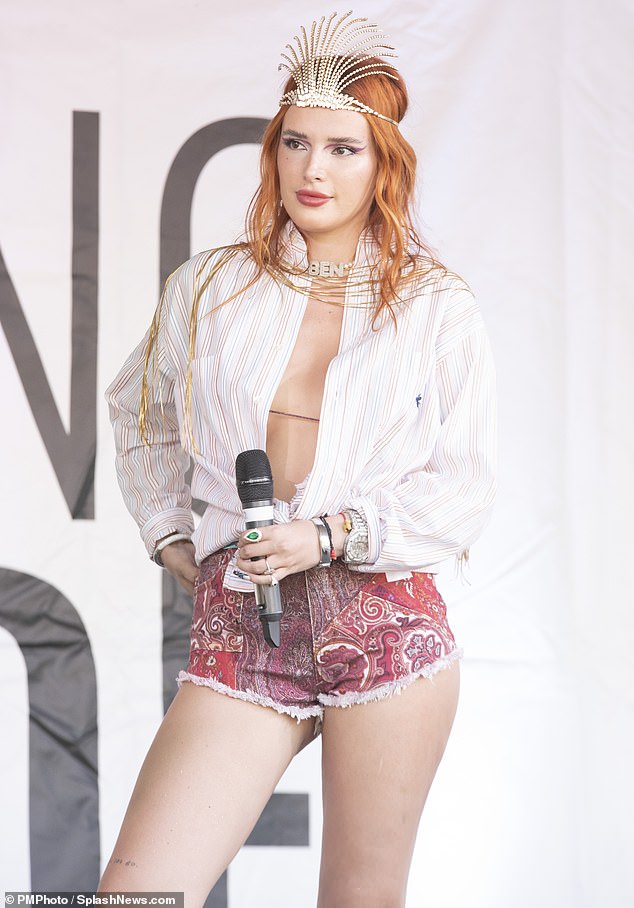 Leggy: The former Disney star looked very leggy in her outfit and she later stripped off her button down shirt

Commanding the crowd: The charismatic redhead drew quite the crowd as she spoke on the mic 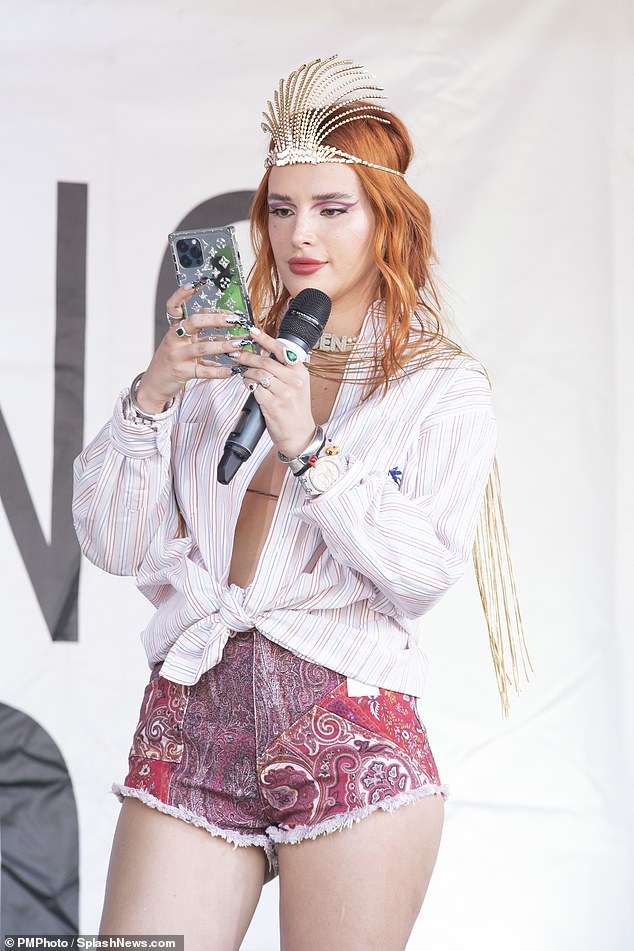 Bella made her love for her fiance known as she wore her custom pearl and diamond necklace that spelled out ‘Ben,’ and her usual display of diamond rings.

And he was proud to have his soon-to-be wife on his arm as he held her while wearing a Lady Gaga X Versace Pride shirt.

At one point the couple looked to lean in for a kiss against a rainbow colored wall as they continue to enjoy vacation in his native country having been in Lake Como days prior.

The pandemic had force them apart for a few months before they reunited in Mexico over the summer and then later worked on a movie together in Rome. 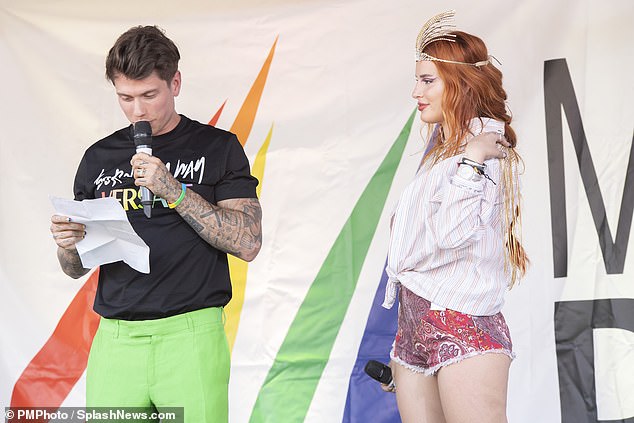 Forever! The couple got engaged in March after dating for nearly two years 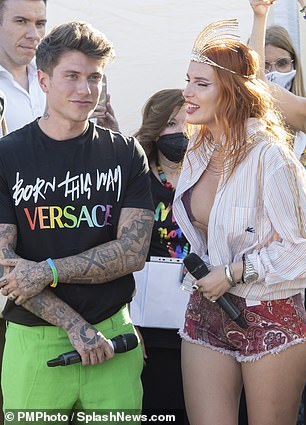 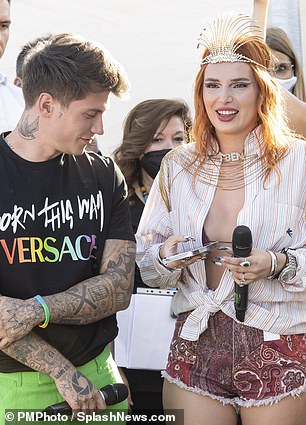 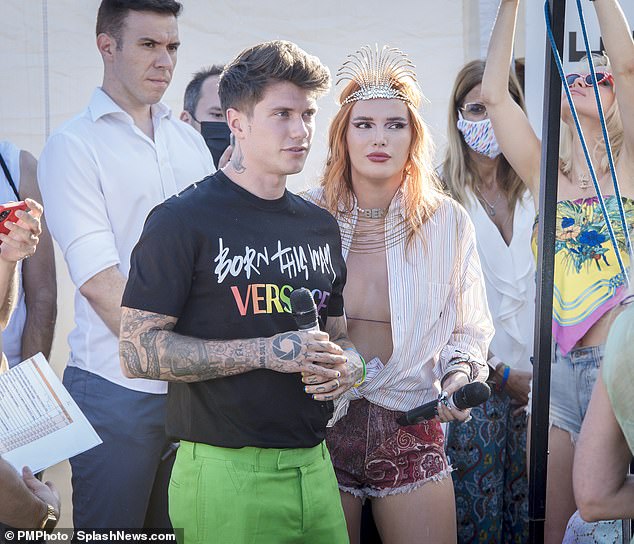 Italian summer: The pair have been in Italy for a few days now 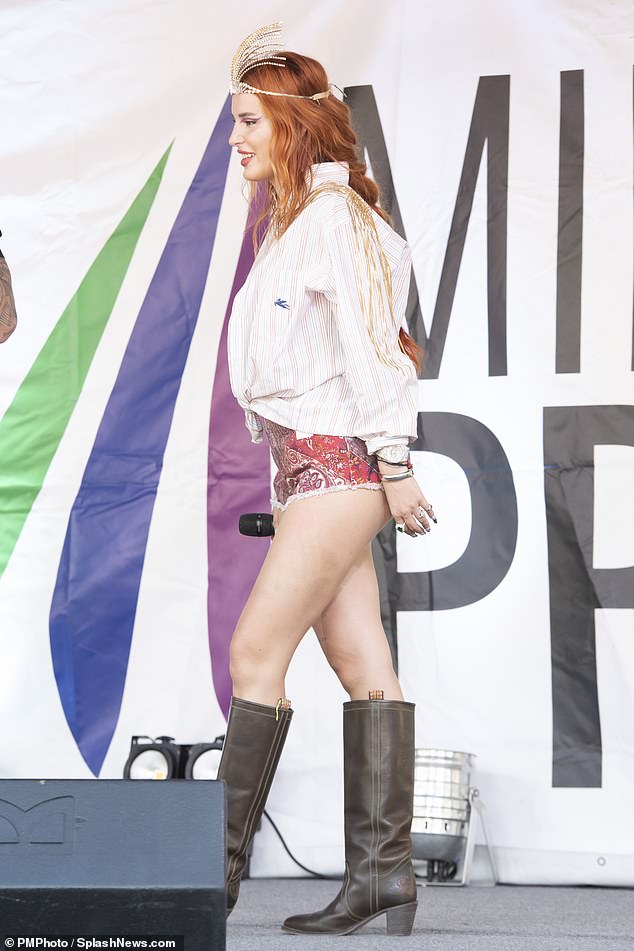 A video shared to Ben’s Instagram showed a a snippet of her speech as she addressed the crowd which drew cheers.

‘Because we are fighters, we are strong, we are brave, we are powerful!’ she said.

She came out as pansexual in 2019 as she continued to shed her ‘good girl’ Disney image.

While promoting her book Life of a Wannabe Mogul: Mental Disarray on Good Morning America, she clarified new truths about her sexuality after identifying previously as bi-sexual. 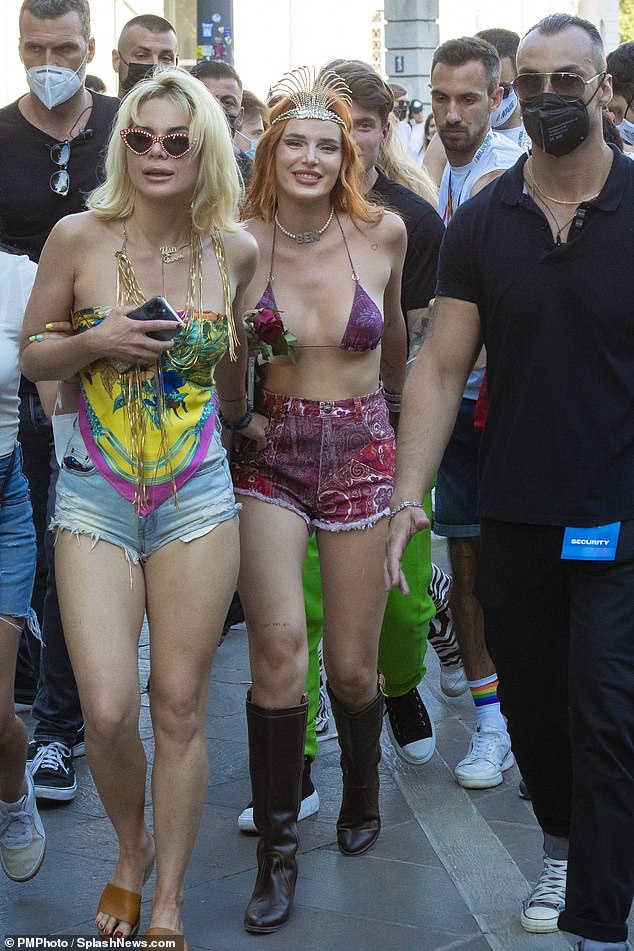 Baring it all: The actress donned a bikini top and paisley patterned daisy dukes 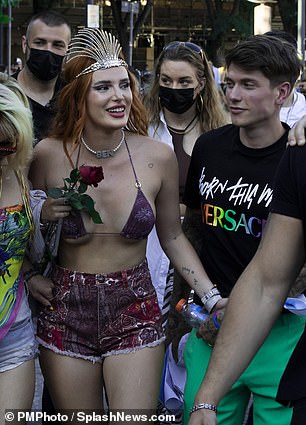 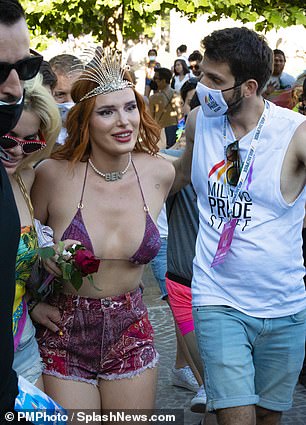 Baring it all: The actress donned a bikini top and paisley patterned daisy dukes

Pansexual: ‘I’m actually a pansexual, and I didn’t know that,’ Thorne said during a 2019 GMA interview

‘I’m actually a pansexual, and I didn’t know that,’ Thorne said. ‘You like what you like,’ she elaborated.

Prior to dating Mascolo, she had been in a throuple with Avril Lavigne’s now boyfriend ModSun and YouTuber Tana Mongeau — who have since feuded online. 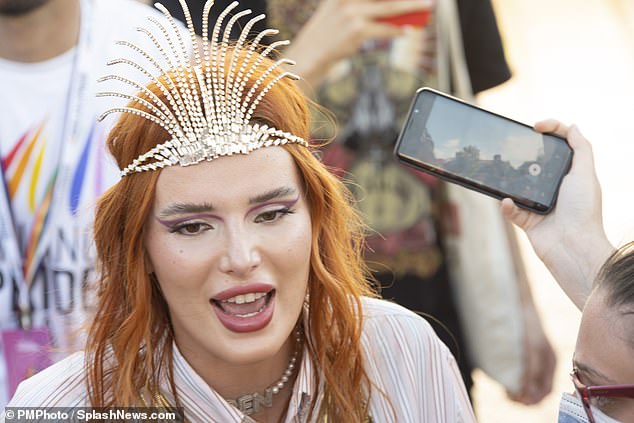 Closeup: Bella did her own makeup which featured magenta eyeshadow and bushy brows 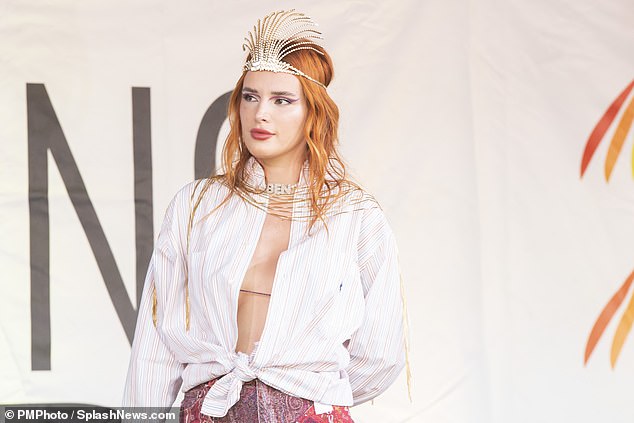 Forever person: Prior to Ben she had been dating ModSun and Tana Mongeau

Bella seemed to channel her feelings about the relationship into a song called ‘Stupid F***ing B**ch,’ while ModSun also wrote a song about Tana called ‘Karma.’

The ending of that relationship seemed to coincide with when she met Ben and they dated for two years before he proposed in March.

Both shared photos from the very grand proposal which included an overwhelming display of her favorite red roses and a huge sign that said ‘Marry Me.’

As Mascolo hails from Italy and Bella from the US it seems that they could have two different wedding ceremonies but neither have spoken out about wedding plans or a timeline. 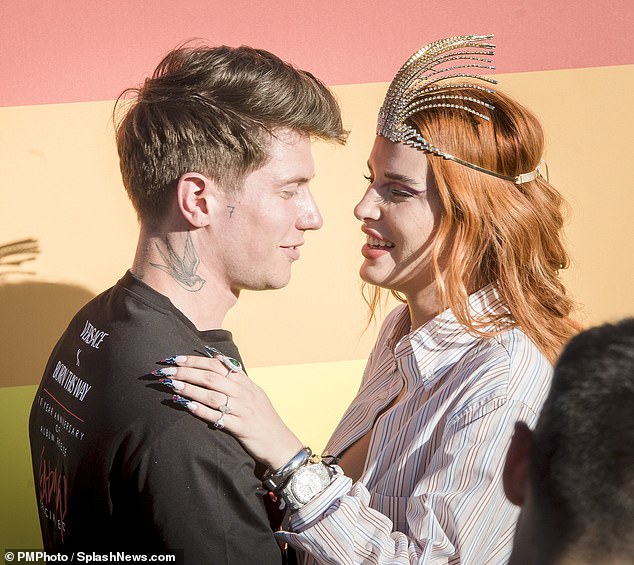 Leaning in: The pair leaned in for a kiss against a rainbow wall