Former US President Barack Obama has opened up about why he dedicated his new memoir ‘A Promise Land’ to his daughters Malia and Sasha.

Barack Obama has discussed the importance of being a father to his two daughter Malia, 22, and Sasha, 19. The former US President, 59, opened up about why he dedicated his new 768 page memoir A Promised Land, to the girls in a sweet Instagram caption. “The fact that my own father was largely absent from my childhood helped shape my ideas about the kind of father I intended to be,” he captioned a throwback photo of his family when the two girls were just toddlers.

“When Malia was born, I made a promise to myself that my kids would know me, that they’d grow up feeling my love keenly and consistently, knowing that I’d always put them first,” he continued. The politician revealed he always made time to eat dinner with wife Michelle, 56, and their daughters despite the daily pressures of the Oval Office. “While serving as President, I made sure to have dinner with Michelle, Sasha, and Malia every evening by 6:30. We’d eat some good meals and catch up on our days … That was one of the best parts of living above the store, as I sometimes called it.”

Barack added, “Seeing them grow up into the intelligent, strong, and compassionate young women they’ve become has been the greatest joy of my life … I’m reminded constantly that there’s no place in the world I’d rather be than with Miche and our girls—and it’s why I’ve dedicated my memoir to them.” 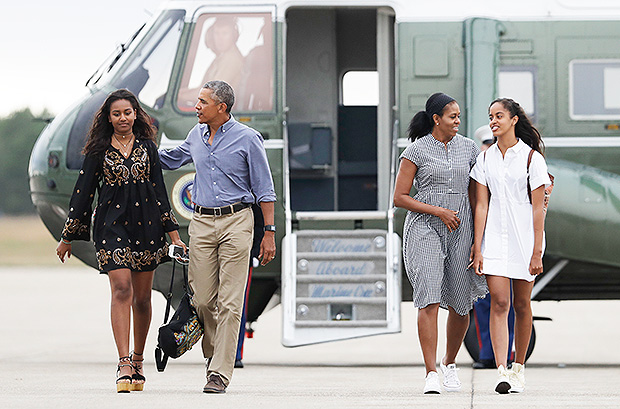 In the book, he also revealed that being the leader of the free world took a toll on his now 28 year marriage to Michelle. She remains one of the most beloved first ladies in United States history, but behind the scenes, Barack wrote that friends and even family treated her as “secondary” in importance to himself. “I continued to sense an undercurrent of tension in her, subtle but constant, like the faint thrum of a hidden machine.”

It caused him to lay awake at night next to his wife, thinking about their life and their relationship before his presidency, “when everything between us felt lighter, when her smile was more constant and our love less encumbered, and my heart would suddenly tighten at the thought that those days might not return.”