Bake Off: Prue Leith forced to PULL OUT of show due to sickness… leaving fans distraught as Paul Hollywood sends TWO people home

The Great British Bake Off fans were distraught on Tuesday night after it was revealed that Prue Leith had pulled out of the show due to sickness.

Taking to Twitter in droves, fans questioned what had happened to the cake expert when she failed appear for the showstopper segment, leaving Paul Hollywood to judge the bakers’ spice biscuit chandeliers solo.

It came as fans were also left in tears after Terry Hartill and Karen Wright were eliminated, as the former spoke candidly about how the show helped him in getting over the death of his wife. 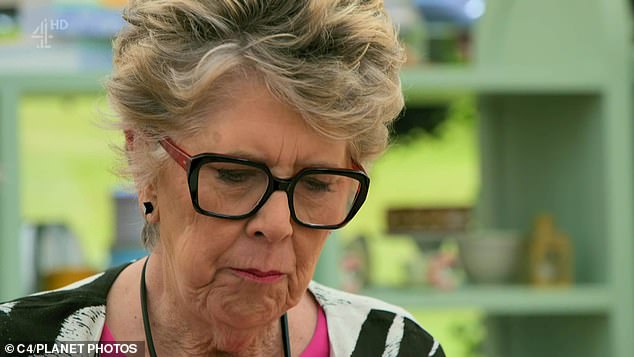 Shocking: The Great British Bake Off fans were distraught on Tuesday night after it was revealed that Prue Leith had pulled out of the show due to sickness

As Paul arrived in the tent alongside hosts Sandi Toksvig and Noel Fielding, it was revealed that Prue was unable to appear on the show.

Sandi explained: ‘Unfortunately Prue is not with us this morning but that doesn’t mean that it’s going to be any easier for you.’ 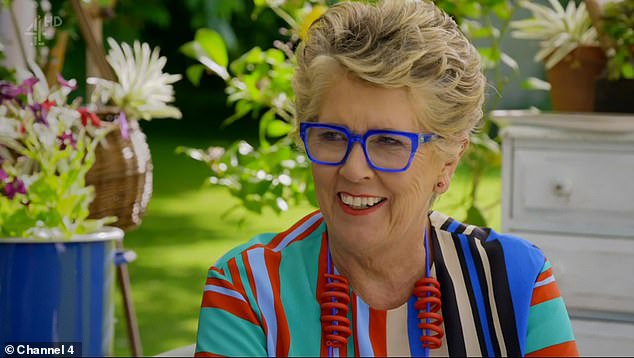 Worrying: Taking to Twitter in droves, fans questioned what had happened to the cake expert when she failed appear for the showstopper segment after appearing in the earlier show 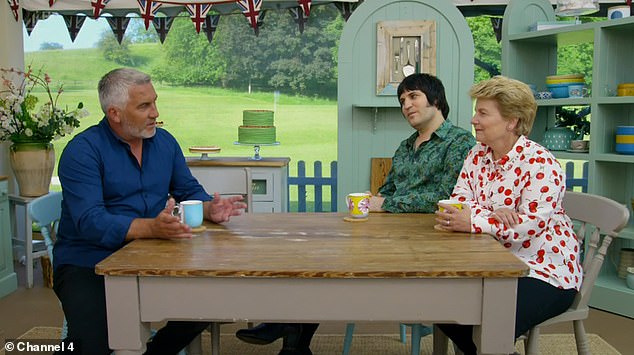 Man in power: Paul Hollywood joked that he would be ‘flying solo’ as he judged the showstopper, and eventually made the decision to send two bakers home

And as they prepared for the showstopper, Paul added that he would be ‘flying solo’ for the judging process, and thus it would his decision alone who would be sent home.

It took many fans a moment or two to realise that Prue was absent, with many expressing their concern as to why she was unable to attend filming.

One tweeted: ‘Erm Prue where the devil are you hun for the final judging?!’ while another added: ‘It turns out Prue wasn’t there for the last half…anyone notice?!’

A third added: ‘Is Prue not bothering to judge this showstopper challenge?’ 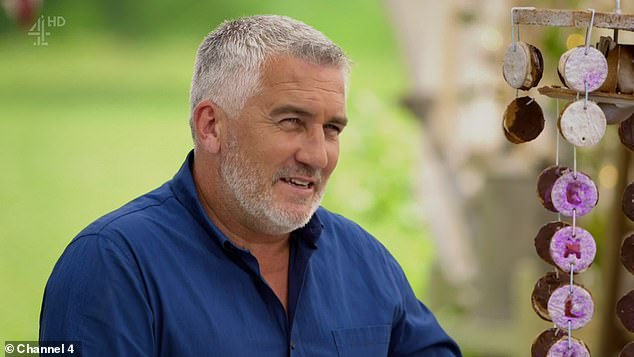 Tough job: Paul was tasked with judging the bakers spice biscuit chandeliers, but many fans failed to notice outright why Prue wasn’t present 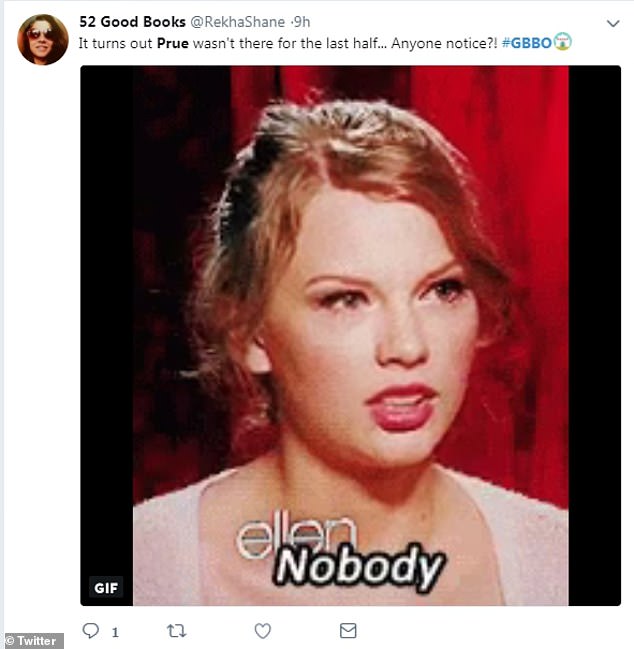 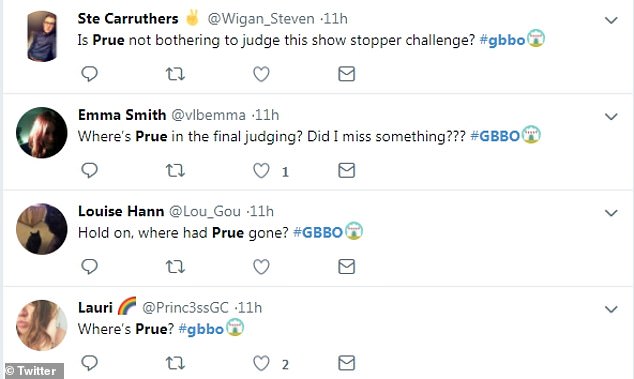 Where is she? Many fans rushed to Twitter after noticing the Prue was not at the challenge

It came in a shocking show when fans were also moved to tears by the elimination of Terry and Karen, after their biscuit artworks failed to win Paul’s favour.

Many viewers were on the brink of tears after Terry admitted that taking part in the show had helped him to get over the death of his wife.

He said: ‘I said I wouldn’t get upset. It’s funny when you’re on your own… my wife and I were very happy and that was a massive loss.

‘It’s been a big help and something I’ll remember for a long time. I won’t stop baking. I’m very much looking forward to more projects carried out in a bigger time frame.’ 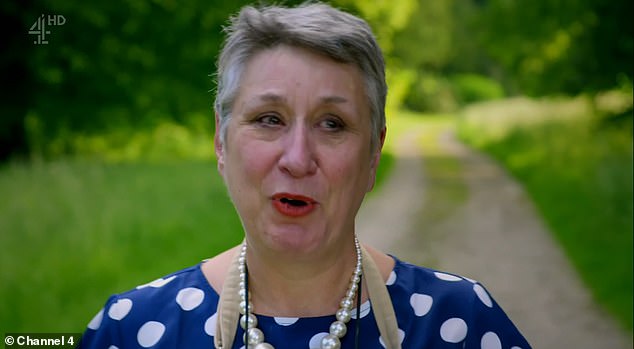 Emotional: It was a heart-wrenching end to the show, as both bakers Terry Hartill and Karen Wright (above) were eliminated 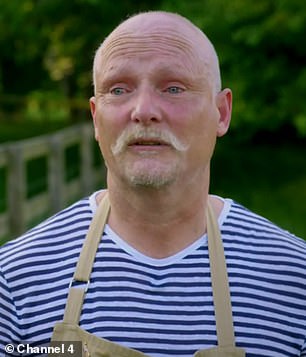 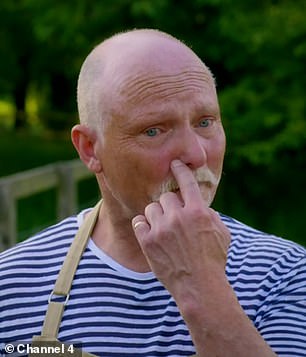 Touching: Terry struggled to hold back the tears as she admitted that taking part in the show helped him to get over the death of his wife 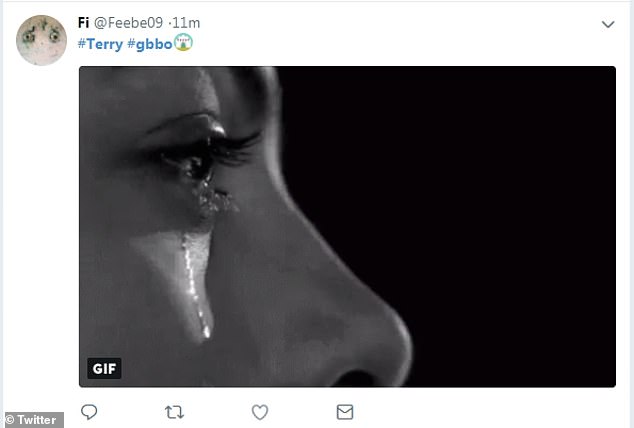 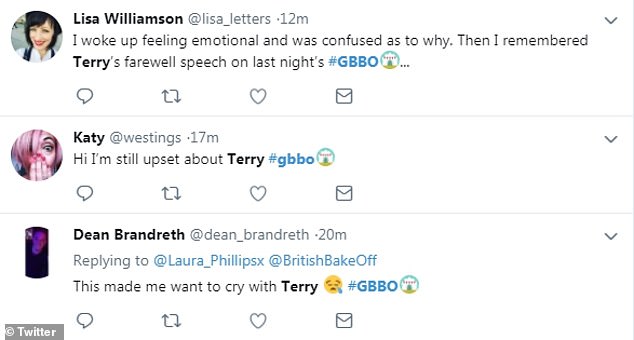 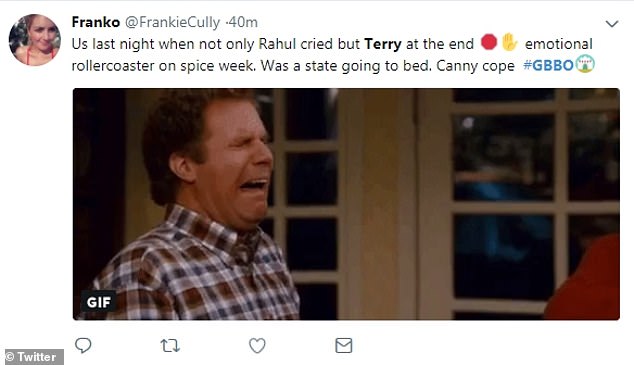 Crying: Many viewers took to Twitter through their tears as they admitted being devastated that Terry had been sent home

Taking to Twitter through their tears one fan wrote: ‘I woke up feeling emotional and was confused as to why. Then I remembered Terry’s farewell speech on last night’s #GBBO.’

Another added: ‘I love Terry and I’m gonna miss him so much.’

Next week will see the bakers contend with the well-known Pastry Week, making a range of savoury and sweet dishes, which will also include a pie of a showstopper.

The Great British Bake Off continues on Tuesday 2nd October at 8pm on Channel 4. 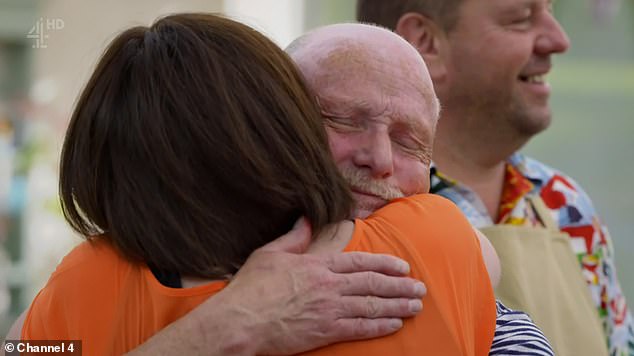 Back soon: The Great British Bake Off continues on Tuesday 2nd October at 8pm on Channel 4