BAFTA TV Awards 2021: ‘This is a literal joke!’ Fans outraged as The Crown’s Emma Corrin and Gillian Anderson are SNUBBED from nominations – despite their award season success

The Crown fans were left outraged as leading actresses Emma Corrin and Gillian Anderson were snubbed from this year’s BAFTA Television Awards.

Viewers took to Twitter to declare their absence from the nominations was a ‘literal joke’, despite their respective award season success as the late Princess Diana and Margaret Thatcher. 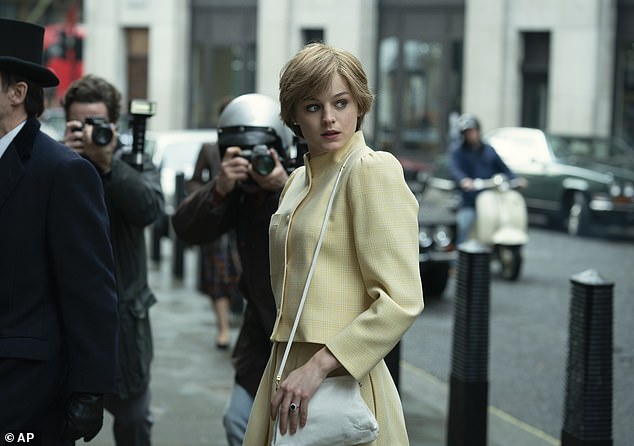 ‘WHAT?!’ The Crown fans were left outraged as leading actresses Emma Corrin (pictured as Princess Diana) and Gillian Anderson were snubbed from this year’s BAFTA Television Awards

Season four of the Netflix programme is based on the former Princess of Wales’ strained relationship with her husband Charles, as well as Margaret’s reign as Prime Minister of the UK from the late 70s to the early 90s.

Expressing their frustration on social media, ‘baffled’ fans wrote: ‘Emma and gillian not being nominated for any baftas after already sweeping award season so far its very odd #BAFTATV… the baftas a literal joke there’s a reason gillian’s american accent is better.

‘Nah the fact that that baftas have josh nominated but not emma.? they both gave outstanding performances… ANYWAY GOOD MORNING and im mad at the #BAFTAS nominations for forgetting emma corrin. 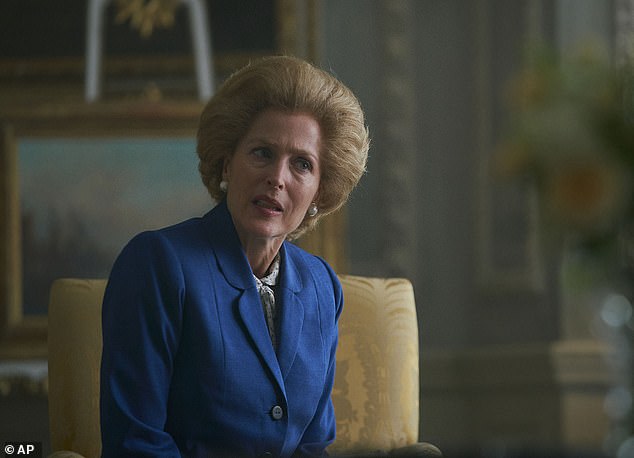 ‘I’m mad!’ Viewers took to Twitter to declare their absence from the nominations was a ‘literal joke’ (Gillian pictured as Margaret Thatcher) 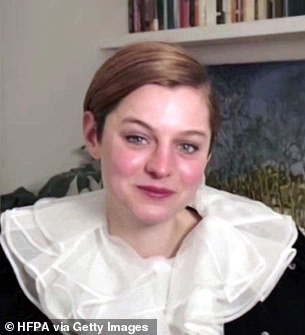 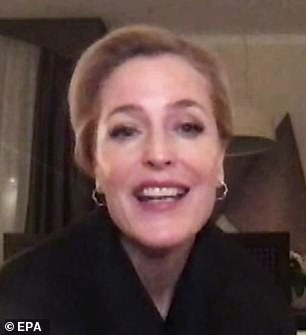 ‘good night to everyone except the baftas that snubbed gillian anderson again… Gillian not being nominated for a @BAFTA for The Crown or Sex Ed are you kidding me! #GillianAnderson #BAFTAS.’ (sic)

Angered viewers didn’t hold back as they continued: ‘baftas u absolute embarrassments how r u gonna nominate josh but not emma THEY’RE SUPPOSED TO BE DOMINATING AWARD SEASONS TOGETHER WHAT IS WRONG WITH YOU.

‘Surely the prize for the biggest #BAFTAS TV Awards snub goes to Gillian Anderson? She is not nominated for her Golden Globe-winning performance as Margaret Thatcher. 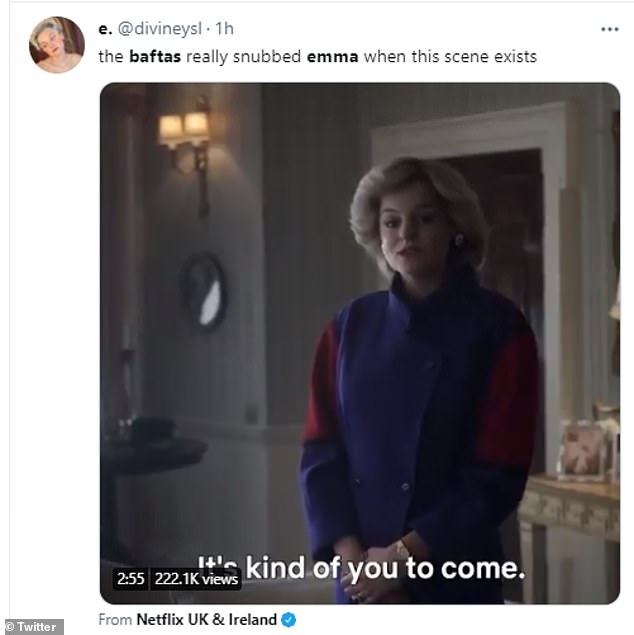 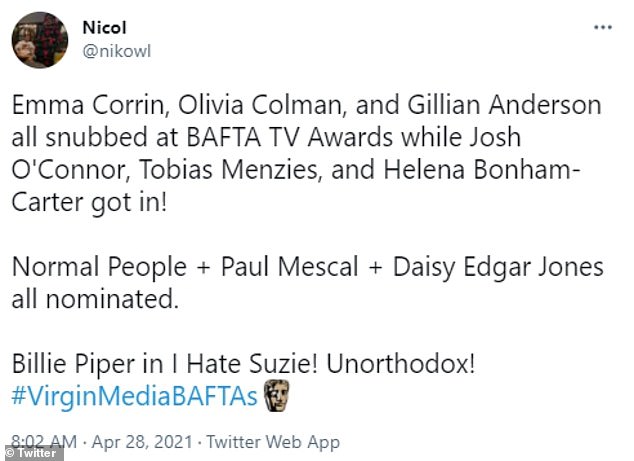 ‘Are you kidding me?’ Baffled fans expressed their frustration on social media

‘How can BAFTA snub someone who’s won all of the other major TV awards so far this year? #GillianAnderson #BAFTAS… okay how did emma corrin not get nominated by the BAFTAs???

‘I can’t believe at least one of them (Olivia, Emma or Gillian) were nominated in every celebration but now they’re not. Like wtf Baftas?

‘Happy for Tobias Menzies’s nomination. Excellent actor who hasn’t been nominated for anything and the best Philip for me but seriously they didn’t nominate Gillian, Olivia or (and especially) Emma!!?? Are you kidding me??!! #VirginMediaBAFTAs #TheCrown.’ (sic)

Since the show’s release last year, Cambridge alum Emma scooped the Best Actress prizes at this year’s Critics’ Choice and Golden Globe ceremonies, as well as a SAG in the Outstanding Performance by an Ensemble in a Drama Series category. 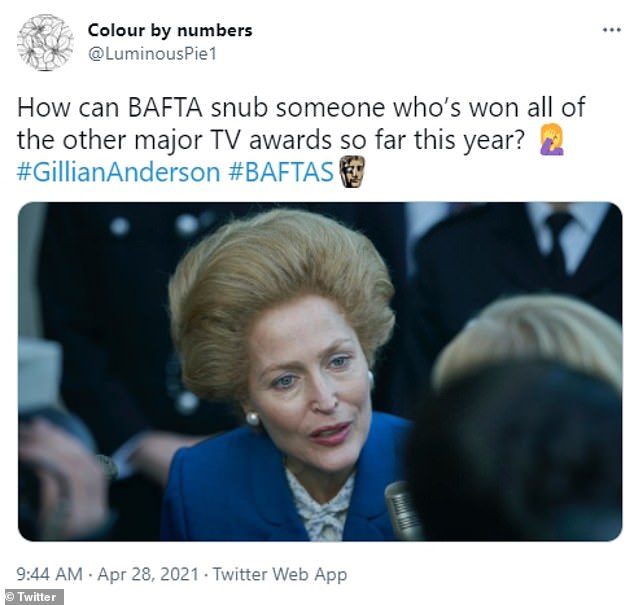 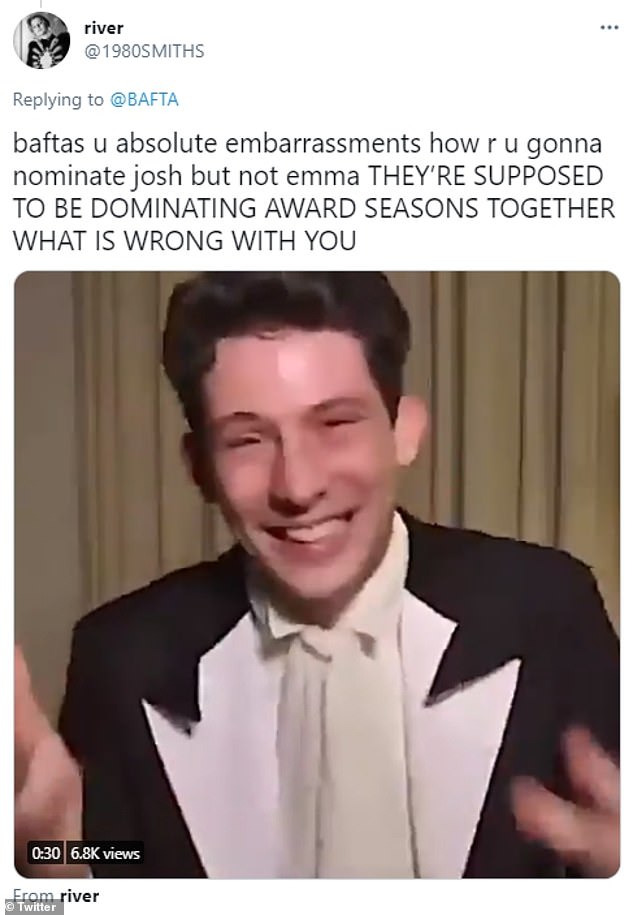 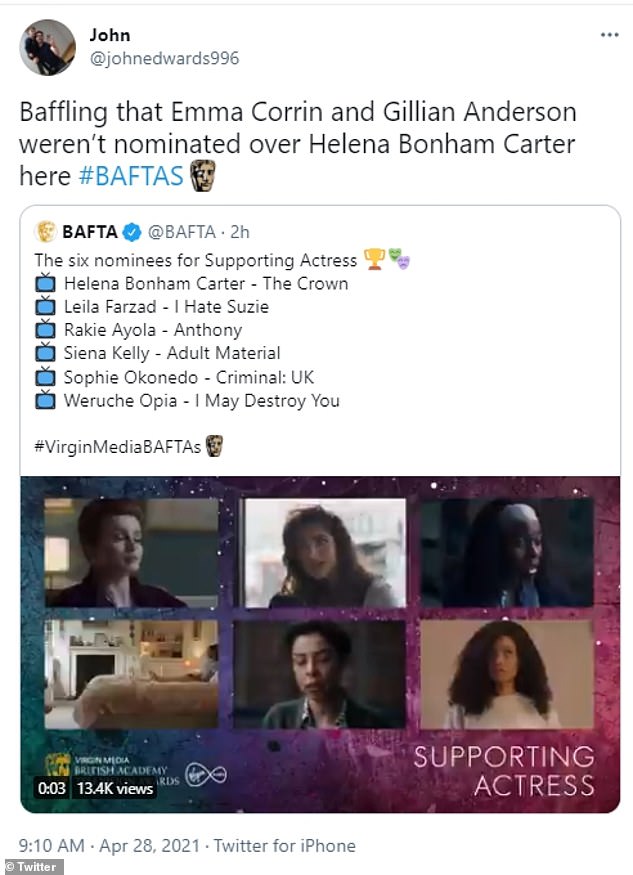 ‘You absolute embarrassments!’ Angered viewers didn’t hold back with their thoughts on the line-up

The Sex Education star was also awarded the Best Supporting Actress gongs for her role as the stern politician at the same events.

Meanwhile, the Supporting Actress category is dominated by The Crown star Helena Bonham Carter, Leila Farzad for her role in I Hate Suzie, Anthony’s Rakie Ayola, Adult Material’s Siena Kelly, Criminal: UK’s Sophie Okonedo and Weruche Opia for I May Destroy You.

PAAPA ESSIEDU – I May Destroy You

MICHAELA COEL – I May Destroy You

WERUCHE OPIA – I May Destroy You

FEMALE PERFORMANCE IN A COMEDY PROGRAMME

DAISY MAY COOPER – This Country

MALE PERFORMANCE IN A COMEDY PROGRAMME

REECE SHEARSMITH – Inside No.9

I MAY DESTROY YOU

THE BATTLE FOR HONG KONG (DISPATCHES)

DAVID MITCHELL – Would I Lie to You? At Christmas

LOSING IT: OUR MENTAL HEALTH EMERGENCY

ONCE UPON A TIME IN IRAQ

RACE ACROSS THE WORLD

THE SCHOOL THAT TRIED TO END RACISM

DISABLED NOT DEFEATED: THE ROCK BANS WITH LEARNING DISABILITIES – DELTA 7

THEY SAW THE SUN FIRST

AMERICAN MURDER: THE FAMILY NEXT DOOR

LOCKED IN: BREAKING THE SILENCE (STORYVILLE)

VIRGIN MEDIA’S MUST-SEE MOMENT (voted for by the public)