Ariana Grande calls fiancé Dalton Gomez ‘my heart, my person’ as she shares three snuggly snaps with her realtor beau

Ariana Grande posted a trio of snaps featuring her fiancé, Dalton Gomez, to her Instagram account on Saturday.

In her first photo, the 27-year-old singer was pictured relaxing in front of a roaring fireplace with her 25-year-old partner, while her second and third snaps showed the musician being kissed on her right cheek.

She also wrote a short message directed at Gomez in the post’s caption that read: ‘my heart my person !!! thank u so much for being u.’ 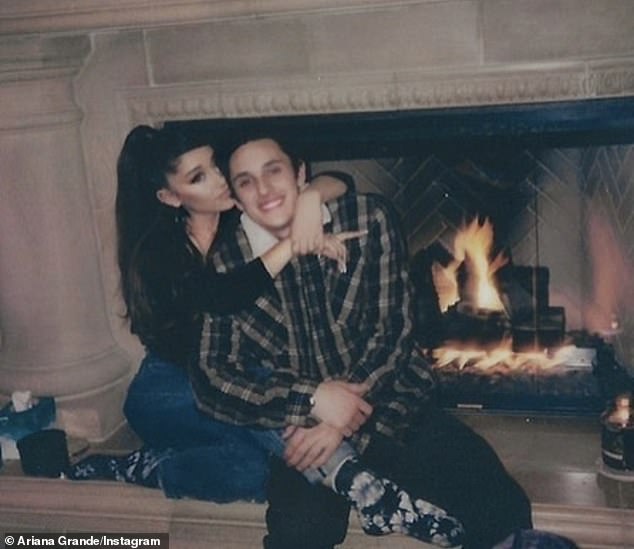 Relaxing by the fire: Ariana Grande shared a trio of photos to her Instagram account on Saturday, all of which featured her fiance Dalton Gomez

Grande kept it casual in her first snap, as she wore a long-sleeve black t-shirt on top of a pair of blue jeans, although she later changed into a white shirt for the second and third photos.

The 7 Rings singer’s luscious brunette hair was tied back in a long ponytail and cascaded onto her backside in all of her photos.

Her fiancé opted for an equally dressed-down ensemble in all of the snaps, as he was pictured wearing a fleece-lined flannel shirt and black pants before removing his outer layer for the singer’s last two shots.

Grande and Gomez have been romantically involved ever since January of last year, although they were not spotted in public together until that March. 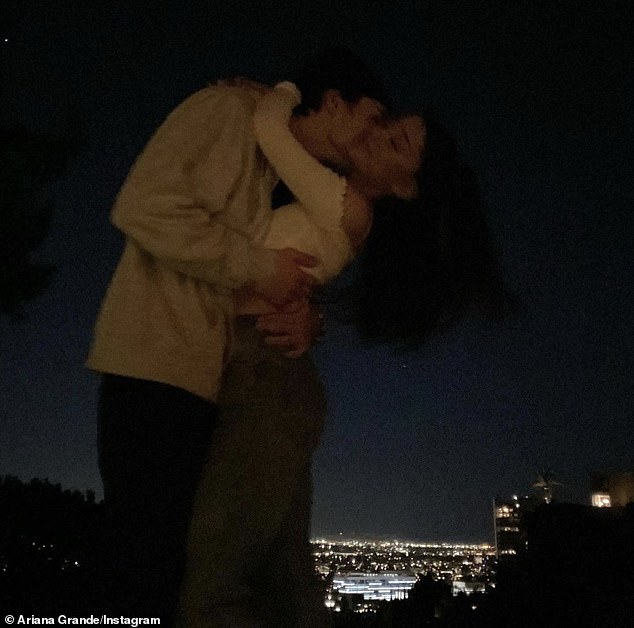 Intimate moments: In two of her three shots, the hitmaker’s partner was pictured kissing her right cheek 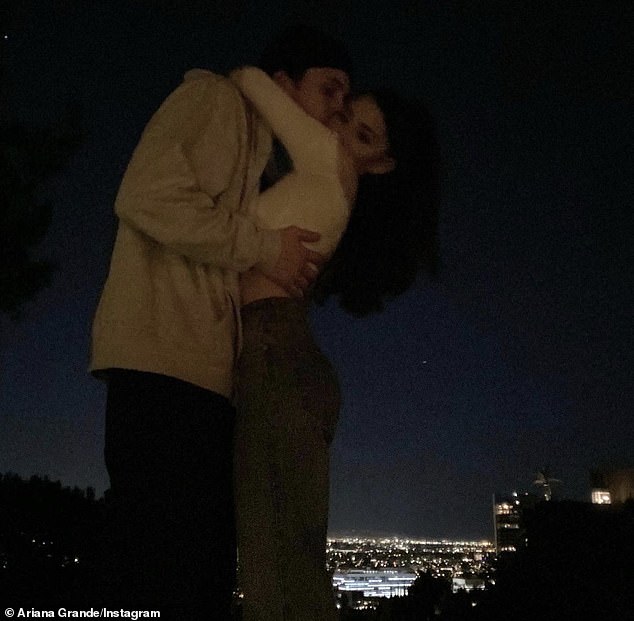 She really meant it: In her post’s caption, Grande referred to Gomez as ‘my heart, my person’

The two embarked on a whirlwind romance and moved into a house in the Hollywood Hills over the summer, where they have spent the majority of their period of quarantine.

Last December, the musician announced that she was engaged through a series of snaps posted to her Instagram account, one of which showed her wearing an impressive-looking ring.

Prior to her relationship with the real estate agent, the songwriter dated rapper Big Sean for a few months, although they broke up in April of 2015. 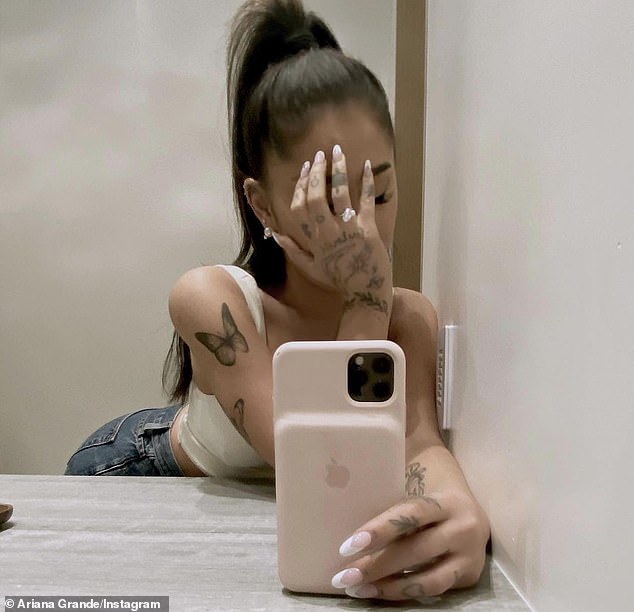 There it is: Last December, the songwriter announced her engagement with a post made to her Instagram account, which included a photo where she showed off her ring to her 229 million followers

The singer also dated dancer Ricky Alvarez for a brief period before the two ended their relationship in 2016.

She later began a relationship with Mac Miller, who she had previously collaborated with on her 2012 track The Way.

The two would go on to work on another song entitled My Favorite Part, which was released on the rapper’s fourth studio album, The Divine Feminine. 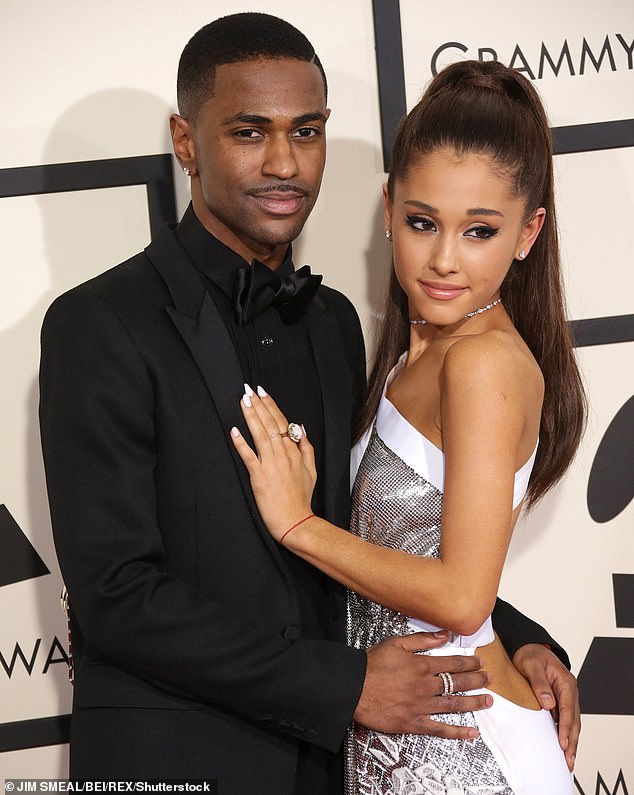 First flame: Grande briefly dated rapper Big Sean, although the two broke up in April of 2015; the two are seen at the 57th Annual Grammy Awards, which took place that year 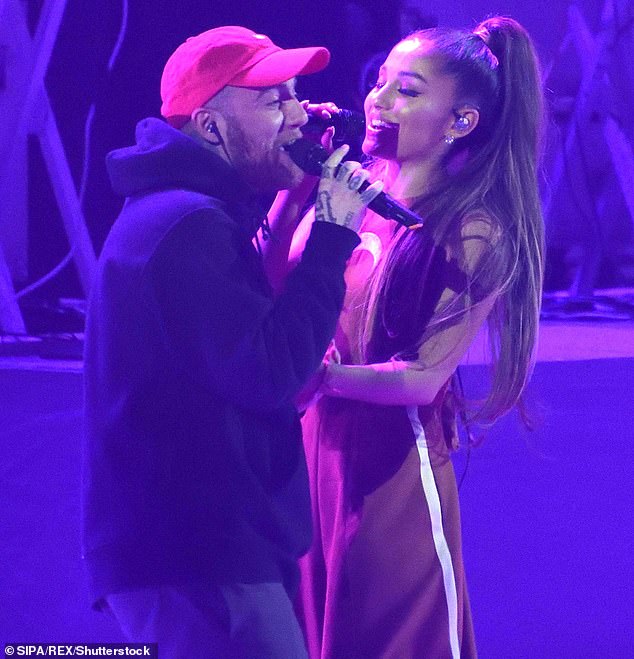 Keeping it going: Grande went on to start a relationship with Mac Miller and the pair collaborated on the 2016 track My Favorite Part, although they broke up two years later; they are seen performing in 2017

The pair broke things off just months before Miller passed away from an accidental drug overdose in September of 2018, and Grande expressed marked sadness after the news of her former boyfriend’s death was made public.

In May of that year, the Break Up With Your Girlfriend, I’m Bored singer began dating Pete Davidson, whom she became engaged to that June, although they went on to call off their engagement and separated in October of 2018.

Grande mentions all of her former partners in her track Thank U, Next, where she thanked them for the joy that they brought into her life, which is evident in the line ‘I’m so f***in’ grateful for my ex.’ 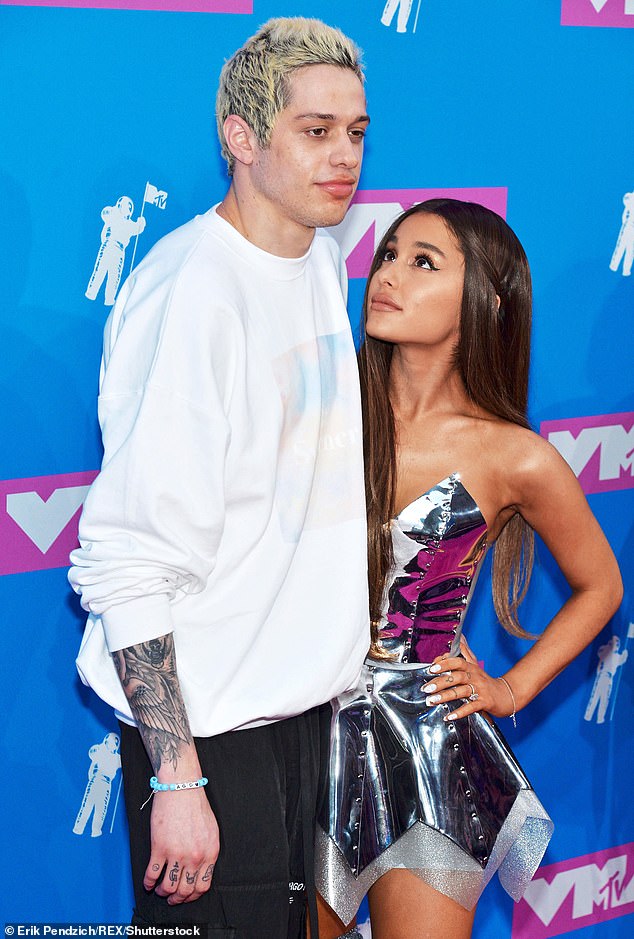 What could have been: The hitmaker later dated and became engaged to Pete Davidson, although they broke things off in October of 2018; the former couple is pictured in August of that year