Ariana Grande shared several rare behind-the-scenes photos to Instagram on Thursday. The crooner was seen in close up as she stuck her tongue out and there were also many images of her new husband Dalton Gomez in a car.

This comes after it was claimed the artist is launching a beauty line. The 27-year-old singer filed a trademark for a line of beauty products, which is reportedly named after her 2018 single God Is A Woman, according to Trendmood.

It covers everything from skincare to body products, including mists, soufflés, perfumes, shower and bath gels. 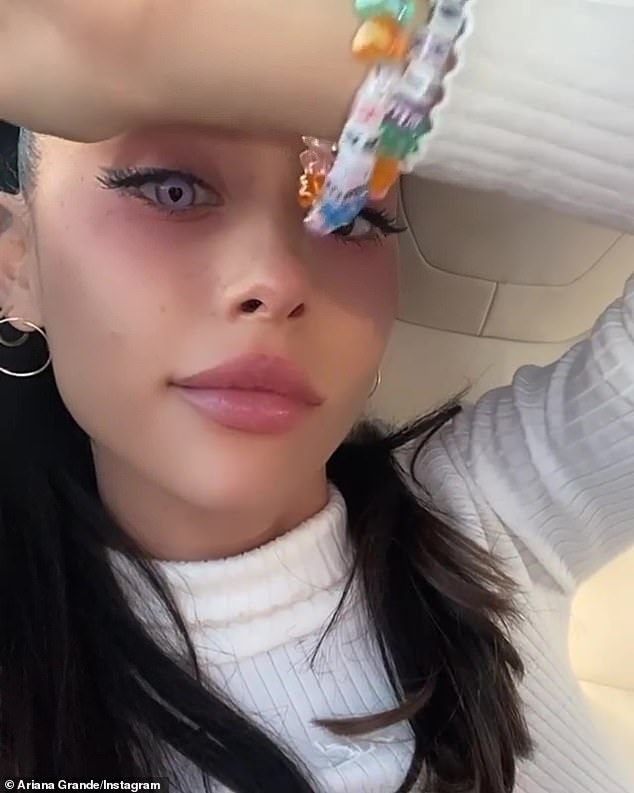 New! Ariana Grande is reportedly launching a beauty line. Here she is seen in a photo shared to Instagram on Thursday 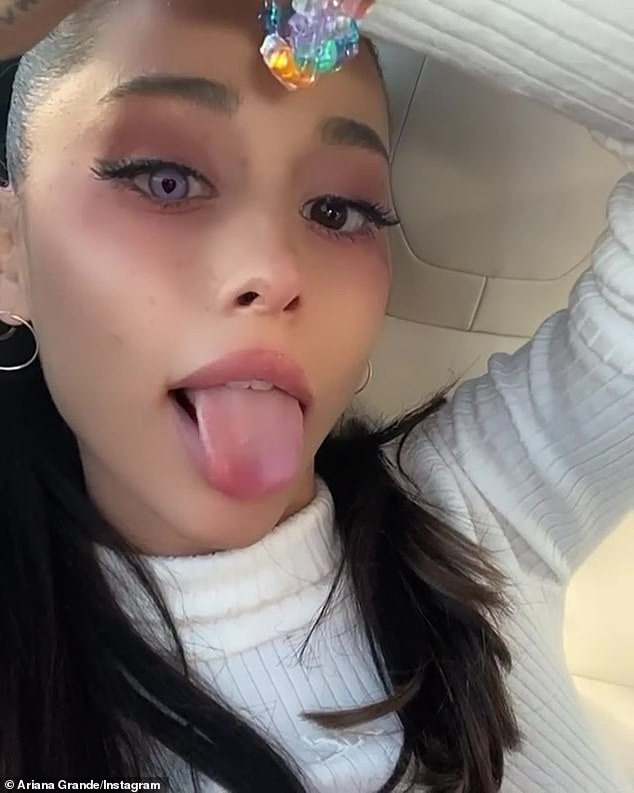 Ready: The 27-year-old singer filed a trademark for a line of beauty products, which is reportedly named after her 2018 single God Is A Woman, according to Trendmood

The Thank U, Next hitmaker has long been a beauty icon with her high ponytails and signature eyeliner that helped her make-up artist land his own beauty line in 2018.

Patrick Ta – who is responsible for Grande’s iconic look on her Sweetener album cover – revealed that he had been ‘working on’ his line for two years before its launch.

Speaking on his Instagram story at the time, the beauty mogul said: ‘I have something super special and exciting that I wanted to share with you guys. It’s something that I’ve been working on for the last two years now. 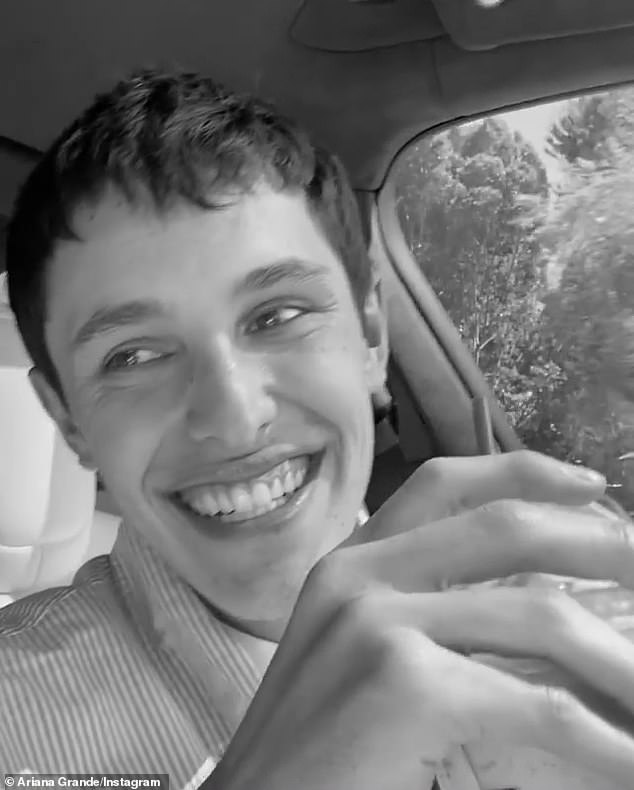 Her love: And she also showed off her husband Dalton Gomez while he was in a car 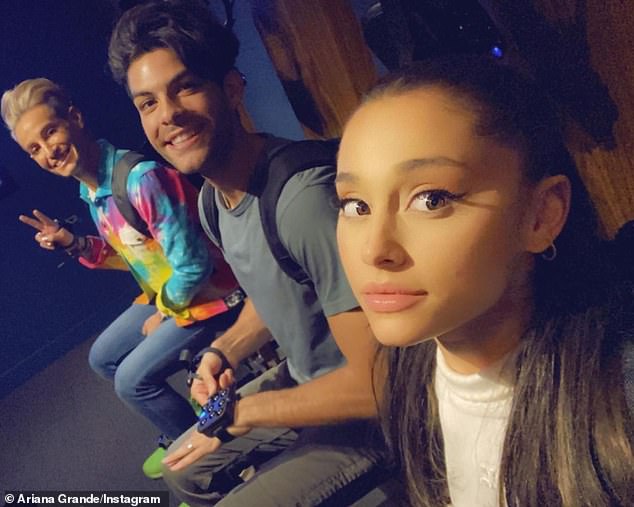 The best: It covers everything from skincare to body products, including mists, soufflés, perfumes, shower and bath gels

‘So, it’s been so hard to keep everything such a secret because I’m obsessed with it – and I can’t keep a secret.

‘But I am launching my first beauty line and I am so excited about it because I’ve worked so hard on the formulas and they’re just so beautiful. ‘So it hasn’t launched yet but I will be posting on my Instagram some of the products soon. I will be using them on my clients and I wonder if you guys can guess what I’m coming out with.’

However, Ariana has already dipped her toes into the beauty world herself with the launch of several fragrances, including Cloud, R.EM, and Ariana Grande Eau de Parfum. Her six fragrances have made the star over £105 million in 2017. 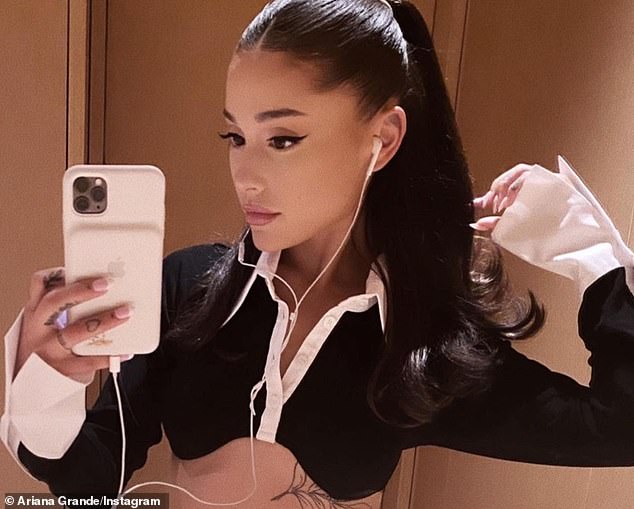 Selfie: This is another image of Ariana that she shared to social media on Thursday

This comes after she appeared ‘smitten, giddy and happy’ on a recent dinner date with Gomez and friends.

The newlyweds enjoyed an evening with pals at Wolfgang Puck at Hotel Bel Air over the weekend, and an onlooker said the pair were ‘super cute’ together.

They told Entertainment Tonight: ‘The whole group had a fun, good time and they were all laughing throughout the evening. 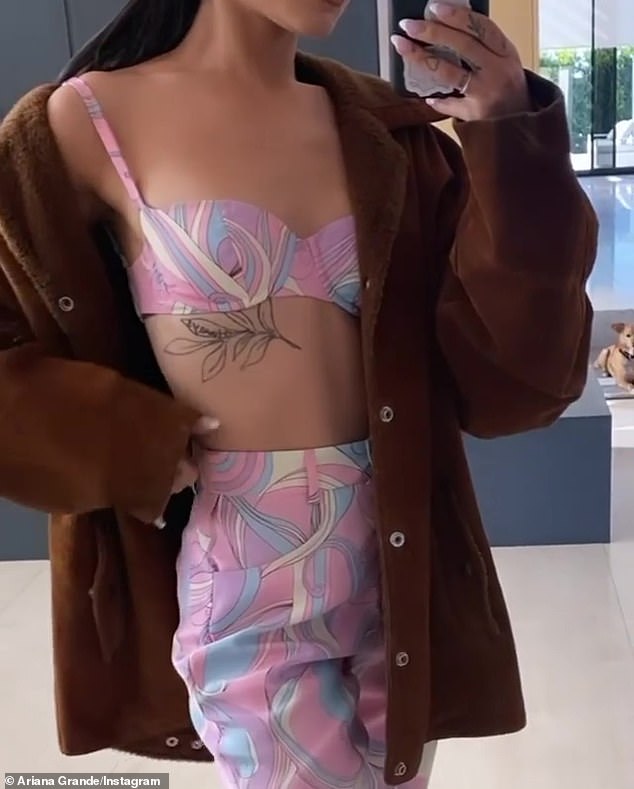 A side of ink: And here the star flashed a tattoo as she wore a pink and white outfit

‘Ariana and Dalton were super cute together and she looked smitten, giddy and happy with Dalton.’

The hitmaker tied the knot with the realtor in a low-key ceremony with just 20 guests at their California home last month.

And sources recently claimed the pop superstar couldn’t be happier with life as a married woman, and is pleased she and her spouse opted for scaled down nuptials.

The insider claimed: ‘She realized that she would rather have a smaller, more intimate wedding now. She’s very happy they were able to pull it off quietly.’

The source added that whilst Ariana and Dalton, 25, initially began planning a ‘big wedding’ after they got engaged in December, they decided they didn’t want to wait for the COVID-19 pandemic to subside and so chose to have a smaller celebration. 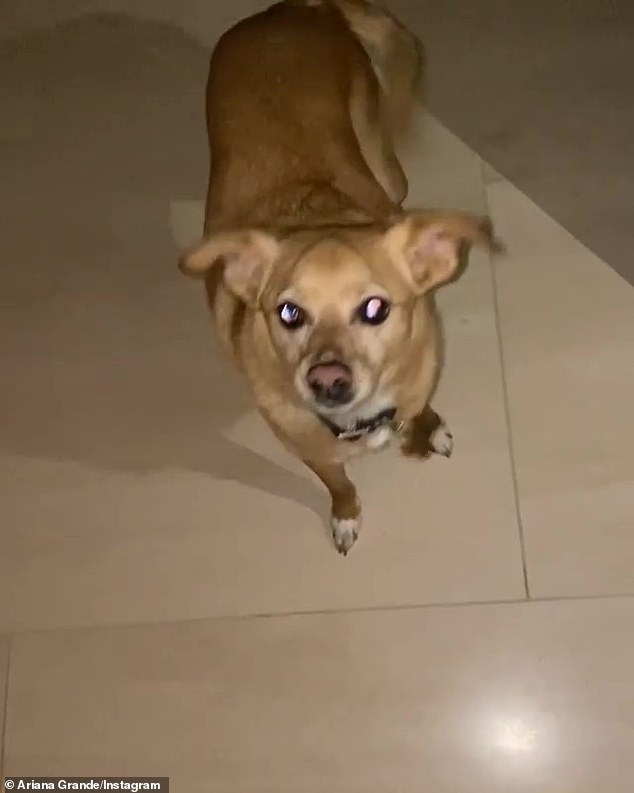 Ruff life: In the new photo dump collection, there was a photo of one of her dogs

Ariana’s wedding was confirmed by her representative, who said she tied the knot with the real estate agent at their home in Montecito, California, on May 15.

They said: ‘They got married. It was tiny and intimate — less than 20 people. The room was so happy and full of love. The couple and both families couldn’t be happier.

‘Both Ari and Dalton love Montecito. They spend a lot of time there. It seems only natural that they would get married at Ari’s beautiful and historic house.’

The singer, 27, announced her engagement by sharing a photo on Instagram of her ring in December.

The couple began dating in January 2020 and spent much of the COVID-19 pandemic self-isolating together at her home.